At a veterans' watering hole, anger over Iraq runs deep and the message is clear: Republican incumbents can no longer count on the support of military voters. 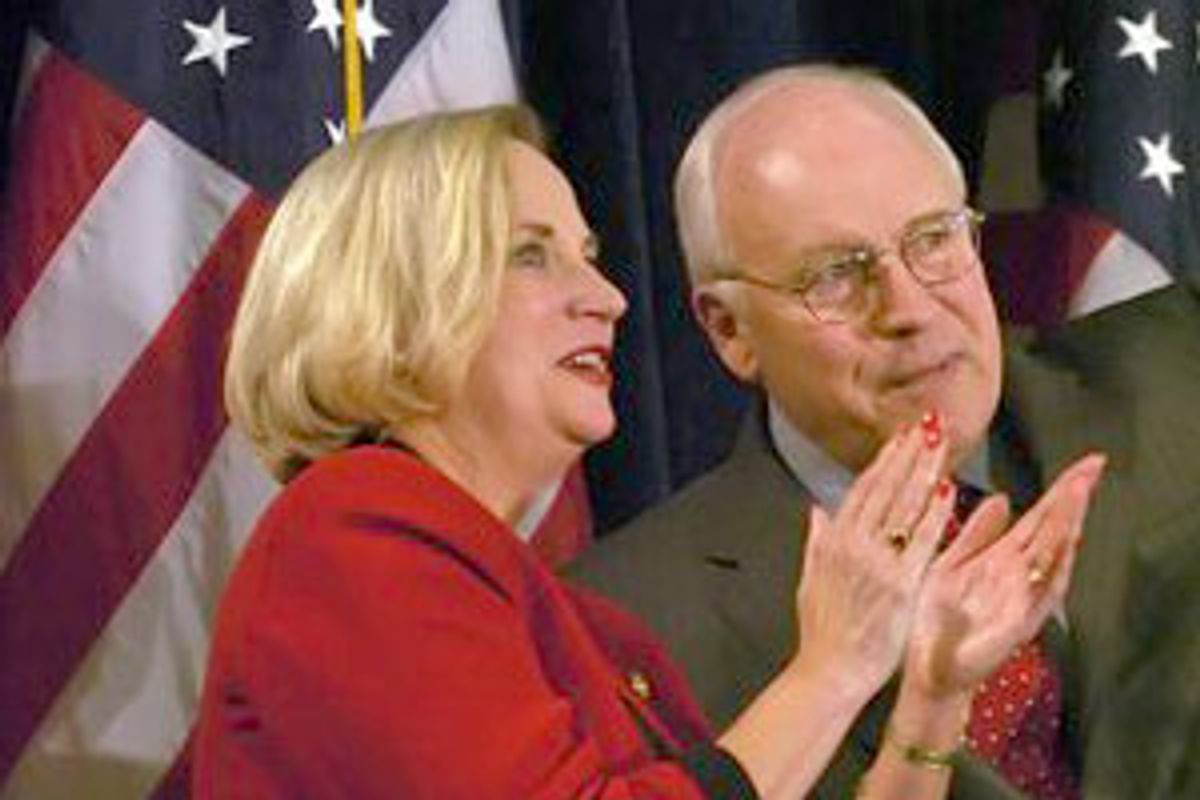 When a NASCAR race is on, the patrons at VFW Post 392 don't hesitate to flip from the American League baseball playoffs to watch. This is a watering hole for military men and the women who keep them honest, a place where people keep name tags on their own liquor bottles behind the bar and still talk about their dislike for Bill Clinton. A full copy of the U.S. Constitution hangs on one wall, across from a bumper sticker that reads "I Love Jet Noise." In the men's bathroom, there is a "Hanoi Jane Urinal Target" in each of the commodes, along with a bull's-eye picture of Jane Fonda in all her 1960s antiwar glory.

But you might be surprised by the political views of the folks inside. Hugh McCabe, a retired Navy lieutenant commander who is sipping a glass of white wine with his niece, son and daughter-in-law on a Sunday night, has had just about all he can take from Washington. "Anybody who is an incumbent, vote 'em out. That's my feeling," says McCabe, who wears a red plastic bracelet at the members-only bar here at the Veterans of Foreign Wars post to show his support for the troops. "We need a third party in government called common sense."

Though he doesn't declare a party affiliation, McCabe says he voted for President Bush in 2004. He worked on the 2000 presidential primary campaign of Sen. John McCain, R-Ariz., because they had both served together in Vietnam on the U.S.S. Forrestal, an aircraft carrier once docked in nearby Norfolk. Ask him about the biggest issue in the upcoming election, and he'll say he doesn't care much what Rep. Mark Foley of Florida did or didn't do over e-mail with teenage pages. But he fears his grandchildren are growing up in a more dangerous world, and he isn't happy at all with the Iraq war. "We shouldn't be there," he says.

He is, in so many words, the Republican congressional leadership's worst fears come true. And if public opinion polls are to be believed, he is not alone here in Virginia's 2nd Congressional District, where the incumbent, Republican Thelma Drake, is fighting hard to retain her seat. The district, which includes parts of Norfolk, Hampton and all of Virginia Beach, has the highest concentration of active-duty military in the country. One in five voting-age residents is a military veteran. With a handful of major naval bases and the constant roar of fighter jets overhead, there is rarely a public event here that isn't preceded by a high school ROTC honor guard to present the colors of the American flag.

After the 2000 census, the state Republican leadership redrew this already conservative district in the hopes of making it a Republican stronghold. Drake took office in 2004 with a solid 55 percent of the vote, on the coattails of President Bush, who won 58 percent. "Part of what we ran on was that she wanted to help in the president's fight in the war on terrorism and help advance his economic policies," says Jeff Palmore, Drake's 2004 campaign manager. "We tried to campaign based on those issues."

But most polls now show Drake with under 50 percent support from local voters, in a statistical dead heat with her Democratic opponent, Phil Kellam, a local commissioner of revenue from a regionally prominent political family. While a solid share of military voters are still likely to support Drake, there are signs that Navy families here are not immune to national concerns about Bush's wartime leadership. "I think we are seeing the same thing here that we are seeing nationally," admits state delegate Leo Wardrup, a Republican who is Drake's local political mentor. "There is disaffection in terms of the war effort."

Clearly, disaffection is rattling traditional military support for the Grand Old Party. In addition to Virginia Beach, USA Today recently reported that Republicans are fighting hard to hold on to seats in Colorado Springs, Colo., home of the Air Force Academy, and Tucson, Ariz., a major retirement community for military veterans. Unlike the Vietnam War, which largely united the professional military, the conflict in Iraq has caused a split within the leadership and the rank and file.

"I was around during Vietnam and I never remember generals coming out and questioning the leadership of the military back then," says Joel Rubin, a longtime political observer in Virginia Beach, who hosts a Sunday morning political show on WVEC-TV. "The anger, I think, is pretty deep, but we won't know for sure until Nov. 7."

For her part, Drake has been doing what she can to change the topic from the war in Iraq. On the campaign trail, she has called illegal immigration the biggest issue in the race, even though migrant labor is minimal here, and less than 5 percent of the district's population identifies as Hispanic. On Saturday, after appearing in a small-town parade in the Phoebus neighborhood of Hampton, Va., Drake argued that Democratic millionaires and their front groups, who started running attack ads against her in the spring, are the big factor in making the race more fierce than 2004. "The big difference is the out-of-state groups that have come in, the MoveOn.org people, the Majority Action Committee, which again is George Soros and his friends," she said. "We did not have these out-of-state groups that were so determined to be negative, to distort the facts and to outright lie about what has taken place."

In the last year, Republicans have pulled out all the stops to buck up Drake's sagging numbers. President Bush, Vice President Cheney, Laura Bush, House Whip Roy Blunt and Majority Leader John Boehner have all come down to raise money for her. The political cash is flowing so freely on both sides, in fact, that watching local television can be a slightly traumatic experience. In advertisements, Drake is accused of coddling oil companies and opposing stem cell research, thus hastening the deaths of telegenic actors who portray ill voters. Kellam is accused of saying, "Stop ... wait for the lawyers" in the war on terror. Then Drake is accused of failing to support military benefits. Thirty seconds later, in yet another ad, an ominous voice intones, "We can't afford Phil Kellam and we certainly can't trust him."

By all appearances, Drake is an unnatural and unlikely mudslinger. Soft spoken and immediately likable, she moved to Norfolk after getting pregnant in high school in Ohio and marrying her Navy-bound boyfriend. The marriage didn't last, but she successfully raised her child as a single mother and sold real estate, until launching a political career as a state delegate. She entered the congressional race in 2004 about 60 days before the election, after the incumbent, Republican Ed Schrock, resigned in a scandal that involved accusations of homosexual behavior. When she won, Drake was rewarded by the Republican leadership with a seat on the Armed Services Committee -- though it's proved a double-edged sword given that the latest round of base closings has affected local Navy installations.

Though only a congressional freshman who almost always voted with the GOP leadership, Drake presents herself as a politician who fights for her constituents. "If you send me a letter, you are going to get a letter back that deals with what you talked about, not 'Thank you for contacting me, we're glad to hear from you,'" Drake bragged after the parade. "I've told my staff, from day one, I ever see a letter like that, you are fired."

While Drake's personality calls to mind a soccer mom who fell into politics by accident, her Democratic opponent, Kellam, has politics coursing through his blood. A blow-dried blond with blue eyes and a firm handshake, Kellam has worked for nearly a decade as a Virginia Beach's revenue commissioner, a minor elected position where his major accomplishments involved changing the local system for car registration. But for much of the 20th century, the Kellam family name has been synonymous with political power in Virginia Beach. There is a Kellam Road, a Kellam High School, and a Kellam Bridge. His grandfather, who was the county clerk of the court in the early 1900s, sired 18 children, including Phil's uncle, Sidney Kellam, who became the Democratic Party's political boss through the 1950s and '60s, even running Lyndon Johnson's 1964 presidential campaign in Virginia, the last time a Democratic nominee won the state. Phil's father, Richard Kellam, became a federal judge, and another uncle served in the state Senate.

There is no doubt that Kellam is running this race to return his family name to its historical place. "I really think the time is right for the Democrats to reemerge," Kellam said on Sunday afternoon, sitting in the wood-paneled dining room of his house, the same one that his grandmother lived in when she bore 17 of her children. "I was a Democrat when it wasn't cool," Kellam jokes, noting that his family fell out of power in the 1960s, in part because they supported Johnson's Civil Rights Act.

As if to prove his bona fides, he speaks and thinks like a political machine boss, listing off precinct-by-precinct voting trends, the infighting between the local Republican Party, and the unlikely local victory of Gov. Tim Kaine in 2005, which left Kellam with a successful get-out-the-vote operation. He lists a half-dozen reasons why the race is so close, but he can't dodge the most obvious to outside observers. "The military folks are just ambivalent about the way things are going," he says. "They are not going to diss the commander in chief, but privately they are very uncomfortable with the way things are going."

Like Drake, Kellam does not do much to advertise his party label, and it is hard to find areas of policy where Kellam has staked out a different position from Drake's. Like her, he is against amnesty for immigrants and refuses to support a timeline for withdrawal from Iraq. He promises to be a conservative Blue Dog Democrat in Congress. "There's going to be some things that my party will vote on that I just won't agree to," he says. But like dozens of other Democrats in this midterm season, he has focused his message less on policy stands than credibility as an effective leader who can succeed where Republicans have failed. At a city Democratic Party barbecue earlier in the day, Kellam did not directly mention his opponent when he addressed the crowd of hundreds. Instead, he spoke about the Republican Congress and the president. "The Congress has provided no oversight for this president," he told the crowd. "That's why we spent $449 billion last year on debt to countries like China and Japan."

It is a message that appears to be working, at least as far as John McCain's old shipmate, Hugh McCabe is concerned. He moved to the area in 1948 and knows the Kellam name well. "The Kellam family has been here a hundred goddamn years," he says at the VFW post as the night wears on. Now the Kellams will once again have McCabe's vote, if only because they are not directly responsible for the mess McCabe sees unfolding in Iraq, and in Washington. "Politics is all bullshit," he continues. "All those people up there ought to get their act together to solve our problems as a nation." For the moment, that's exactly the kind of complaint Democrats want to hear.