"Flags of Our Fathers"

Clint Eastwood exposes some brutal truths about war and how we treat our soldiers in this blunt yet effective movie. 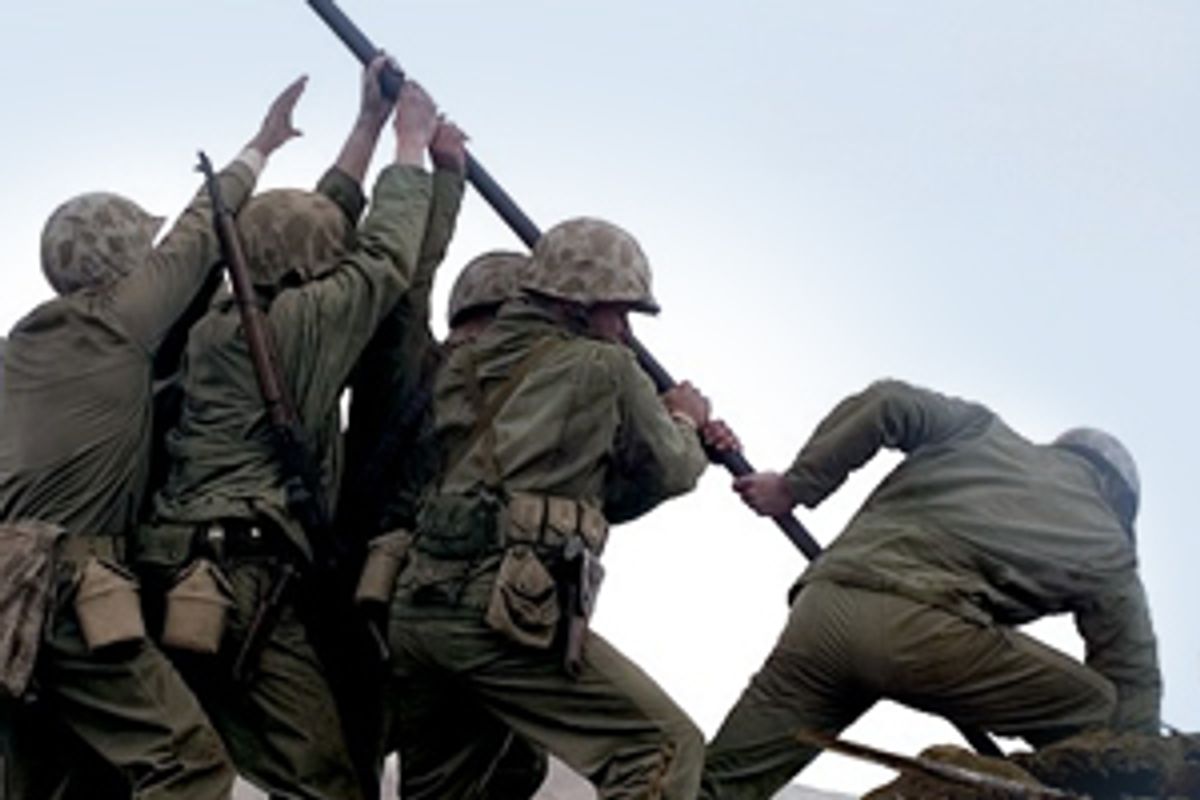 The photograph at the heart of Clint Eastwood's "Flags of Our Fathers" is so piercingly iconic that you have to see it only once to remember it forever: Shot on the fifth day of the 40-day Battle of Iwo Jima, the picture, taken on the fly by Associated Press photographer Joe Rosenthal (he wasnt even looking through the viewfinder), shows six servicemen struggling to raise an American flag on Japanese soil. The picture is virtually a silhouette, an "action" shot in which the arrangement of the men's bodies (the composition is eerily similar to that of classical sculpture) tells us more than their faces do -- and that's good, because we can't see their faces at all.

When the picture became widely circulated back home, the fact that you couldn't identify the faces was part of the point: Parents who'd lost sons in the battle longed to believe they were seeing their own child wrestling with the weight of that improvised flagpole (it was actually a heavy old Japanese water pipe); and for parents whose kids were stationed far from that Japanese island, those unreadable faces -- faces that managed to say, with shadows, everything that could rationally be said about war -- became a blank they could fill in, a receptacle for grief and for hope.

A photograph like that is catnip for a director like Eastwood, a filmmaker who has always been exceedingly comfortable -- perhaps too comfortable -- with notions of sturdy American masculinity and conventional home-and-hearth values. But I don't think Eastwood is completely comfortable with this very famous, very familiar picture: He can look behind it, and around it, but there's no getting to the bottom of it. And his uncertain feelings, coupled with his usual Mitchum-solid confidence, are precisely what make "Flags of Our Fathers" such a surprising, and at times moving, picture.

This is a messier, more ambiguous picture than we'd expect of Eastwood, and it's not always easy sledding: The structure is somewhat fragmented and confusing, and Eastwood can't resist throwing in some corny, macho-sentimental voice-overs. There are many places where Eastwood's technique and sensibility jostle each other like roughhousing, squabbling brothers: There will be a shot, or a whole scene, that shows us he's followed some gut instinct -- the best moments in "Flags of Our Fathers" are effective because of, not in spite of, their blunt simplicity. But Eastwood doesn't know when to stop: He'll expand upon and explicate a point until he grinds it down, diminishing the power of ideas he's already conveyed quite effectively. He'll give us a clear set of dots to connect and then, as if he doesn't trust us, grab the pencil and connect them himself. And sometimes, the movie is just plain boring.

All that said, I found myself thinking about the movie in the hours and days afterward as bits and pieces of it began emerging more clearly from the haze of Eastwood's woolly ambitions. "Flags of Our Fathers," adapted from James Bradley's book (based on his father's wartime experience) by screenwriters William Broyles Jr. and shape-shifting multitasker Paul Haggis, tells the story of the six men who appear in Rosenthal's photograph, focusing most specifically on three of them: John Bradley (Ryan Phillippe), a Navy medic; Rene Gagnon (Jesse Bradford), a Marine runner; and Ira Hayes (Adam Beach), a Marine and a Native American. Although the photograph became a symbol of American victory, the movie is careful not to wave it around as such: The photograph was taken on the fifth day of battle, and by the final day, more than a month later, three of the men -- Mike Strank (Barry Pepper), Harlon Block (Benjamin Walker) and Franklin Sousley (Joseph Cross) -- were dead. (Nearly 7,000 American soldiers were killed on Iwo Jima.)

Eastwood flips back and forth between the grueling battle (which took place in early 1945) and its aftermath, with a few forays into the recent past. After the battle, the three surviving subjects of the photograph were shipped home to the States and sent on tour to sell War Bonds. They became advertising tools for the war that had claimed so many of their comrades -- although as one of the chief fundraisers, played with slick effectiveness by John Slattery, points out, when your war coffers are almost empty, it means sending out a badly equipped army, which could only result in more deaths.

But that doesn't make the men any more comfortable in their role as props, as they're asked to re-create the raising of the flag in stadiums, or feted at dinners in which small 3-D versions of the photograph are rendered in molded white chocolate. (Eastwood lets the camera linger a little too obviously on the red, red strawberry sauce that's ladled over these molded white shapes, but his point -- about the gross ways in which wartime tragedy can be commodified -- isn't lost.)

Of the three, Gagnon, who's something of a showman, seems to enjoy the spotlight the most. Bradley can tolerate it, barely. But it destroys Hayes, a truth Eastwood doesn't shy away from: Beach, an actor with a quiet, sensitive face (he was terrific in John Woo's underrated war picture "Windtalkers"), plays Hayes as a deeply conflicted soul. As a Native American, Hayes was a minority in the armed services, and Eastwood is unsparing in showing the condescension and outright racism he faced, even after he'd risked his life for his country. He also shows, without passing judgment on it, Hayes' troubled drunkenness. Eastwood isn't what you'd call a protest filmmaker, but he does have a strong sense of social justice, and here he uses filmmaking parlance to show us what Johnny Cash, in his famous version of Peter LaFarge's "The Ballad of Ira Hayes," told us in song.

Eastwood may be a guardian of conservative American values. But his treatment of this particular photograph, an angle of the much larger subject of World War II, isn't a rah-rah exercise. (He has already nearly completed a follow-up picture, "Letters From Iwo Jima," to be released next year.) As the movie points out, the famous photograph actually depicts the second raising of a flag on Iwo Jima. (The first flag was removed when a high-ranking naval officer decided he wanted it as a souvenir.) And Eastwood always keeps the heroic symbolism of the picture distinct from the battle during which it was taken. "Flags of Our Fathers" was shot in several locations, including Iwo Jima itself (although the battle sequences were filmed in Iceland), and I suspect Eastwood and his cinematographer, Tom Stern, have read John P. Marquand's reportage, for Harper's, on the invasion. The movie shows us the island from the point of view of the men on the approaching U.S. ships, a landscape that's weirdly familiar and foreign-looking at once. It looks just as Marquand described it: "After one glance at its first vague outlines, it would have been hard to have mistaken it for anything but a Japanese island, for it had the faint delicate colors of a painting on a scroll of silk."

In the battle sequences, the details Eastwood shows us manage to be both muted and horrific -- he doesn't shrink from realistic violence, but he doesnt go out of his way to fetishize it, either. The picture's most remarkable subthread follows Phillippe's character, John Bradley, as he attempts to tend to a wounded colleague, Iggy (Jamie Bell) -- and leaves his side for a few minutes only to realize that he has, quite literally, lost him.

Phillippe gives a wonderful performance here, one that's compact and emotional without ever being emotive. Eastwood, not really a subtle guy as filmmakers go, nonetheless recognizes the subtle expressiveness of Phillipe's face: In one of the movie's best moments, he shows only Bradley's reaction to a horrific sight, and not the sight itself. It's devastating.

The flaws in "Flags of Our Fathers" are at least partly attributable to Eastwood's attempts to do too much. Still, even when he overreaches, he somehow hits the mark. He frames the movie by first showing us Bradley as an old man. He's stumbled on the stairs, and he's calling out for someone, although we don't yet know whom.

Much later, we see the elder Bradley resting in a hospital bed, talking to his son, James (Thomas McCarthy), and by that time, of course, we know whose name he was calling out, and why. We've also seen, much earlier in the movie, how these guys, when they were young, had no idea what to expect as they went into battle. Eastwood shows them lounging nervously around their ship on the nights before they land; they talk, they play cards. They don't look like modern soldiers, because they come from an era when not everybody went to the gym: Some of them look so slight and so wiry, you feel you could pick them up by their ears.

That Eastwood recognizes their youth -- and, yes, their fragility -- tells us a lot about how he feels about this generation of guys, a generation whose numbers are now dwindling away to nothing. And although Eastwood doesn't spell it out, "Flags of Our Fathers" may also be a suggestion that we think more carefully about the future our contemporary servicemen face: We all know about the ugly, unwelcoming America Vietnam vets returned to. But even the veterans of World War II, which is almost uniformly considered a "necessary" war, were useful only for as long as we needed them -- to fight, to sell War Bonds, to fulfill our idea of what a hero should be. After the war, they became regular guys. Some of them became our dads.

Eastwood captures the essence of this generation of guys who couldn't -- wouldn't -- talk about what they saw, and about things they had to do. The older Bradley lies in his hospital bed, talking to his son about nothing in particular, and yet he's saying as much as he can. James Bradley tells his father that in his semi-conscious state, he'd been calling out for Iggy, the missing soldier. The mention of Iggy's name sends John Bradley not back into war, but back into wartime, and he tells his son how, after he and his buddies raised the flag, their commanding officers rewarded them: "They let us swim," he says simply, capturing the way these men, when they were young, had no choice but to yield to authority. These were kids being sent in to do a job. If "they" let you swim, an hour or a day or a month before you died, that was a good thing. And if you lived another 40 or 50 years after those moments of splashing around with your buddies -- well, then, that was both a blessing and a curse.