GOP candidate Alan Schlesinger has no chance in Connecticut. But he's made Lieberman his punching bag, to the delight of Lamont supporters. 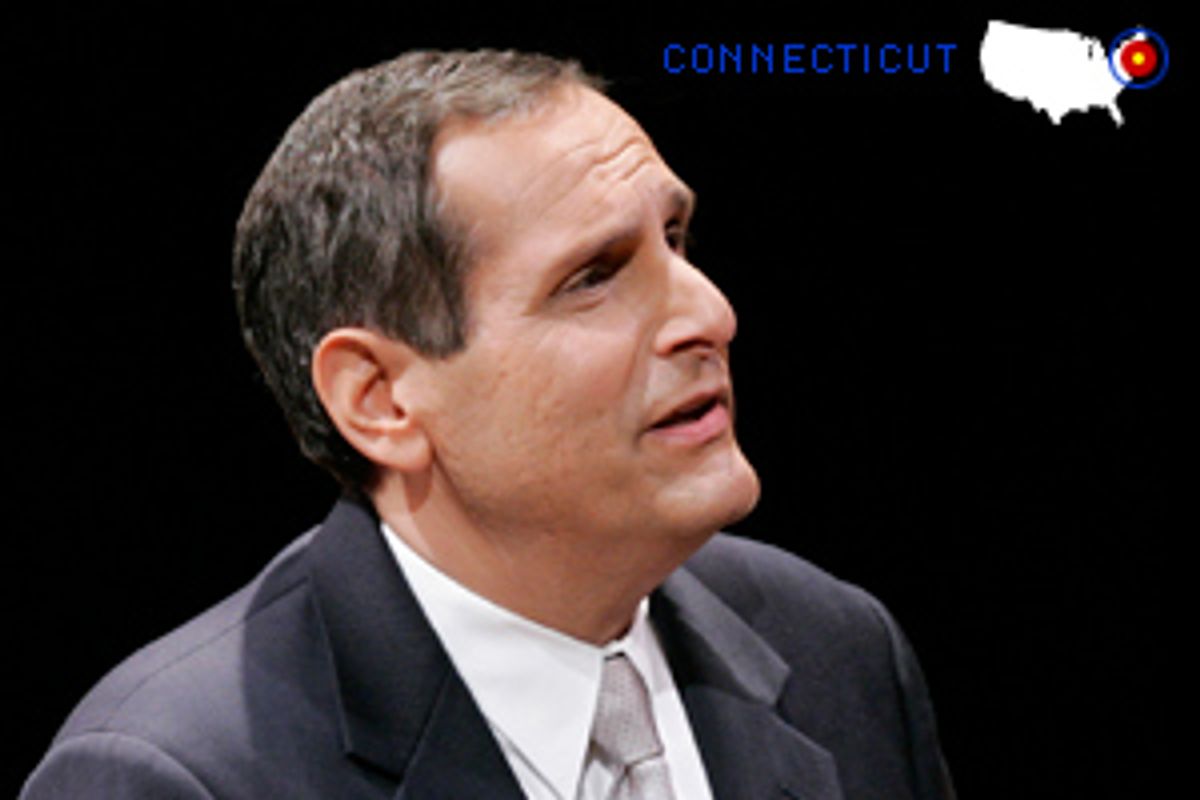 Alan Schlesinger thinks of himself as a piñata.

The Republican candidate for U.S. Senate from Connecticut feels like a papier-mâché punching bag, he says, because of the abuse he has taken from the media and his own party. The press has often acted as if he did not exist and the GOP leadership has treated him like a bombastic nut with no chance of winning.

Schlesinger is running against Democrat Ned Lamont and Democrat-turned-independent Joe Lieberman, the incumbent. Schlesinger gets angry sometimes, he says, when he thinks about the way President Bush "basically gave a wink and a nod for the big money to go out and support Lieberman." He also got angry when the state party publicly called on him to withdraw from the race over allegations of erratic behavior at our nation's fine gambling establishments. "I was thrown under the bus," he gripes. "That's what made fundraising so difficult."

And he gets mad at the media, which has been covering something it calls "the Lieberman-Lamont race," usually because it's just too exhausting to type in a long third name with three syllables for a candidate pulling about 3 percent in the polls.

But that 3 percent was before last week, back in the day when nobody interviewed Schlesinger or wrote about him, and he had no money for TV commercials, which are the modern Cartesian proof of political existence. I buy TV time, therefore I am.

Last week, a funny thing happened. He debated Lamont and Lieberman. Schlesinger, who debates the two front-runners again Monday evening, likes to call this new phase of his campaign "The Piñata Strikes Back."

A former mayor and state legislator, Schlesinger is what you might call a Goldwater Republican. In his case, not so much Barry as Morty Goldwater, the guy who used to hold forth in the Minnehaha Lounge at the Wonooscapomic Country Club. Remember Morty? He'd start out kind of charming and get louder as the evening rolled along. His opinions would get more forceful and possibly less grounded in fact, so that by around 11 p.m., he had pretty much half the barroom to himself.

In this particular Senate race, though, Morty Goldwater is just what the doctor ordered. The poll numbers were frozen in place, with three-term incumbent Lieberman headed toward a comfortable victory over Lamont, the guy who beat him in the Democratic primary. While waiting for the inevitable on Nov. 7, Lieberman and Lamont seemed locked in a struggle over who could be a less electrifying political presence. Then Schlesinger jolted the campaign out of its slumber with the first big exchange of the first debate on Oct. 16.

Stunned, Lieberman looked momentarily like the Scarecrow from "The Wizard of Oz" trying to give directions. "I thought the attacks were only going to come from this side," he protested, flopping a straw-filled arm toward Lamont. "I didn't realize they were going to come from that side," he concluded, gesturing back toward Schlesinger.

The remark, of course, spoke volumes about Lieberman's understanding of this race, which is that Republicans are supposed to raise tons of money for him and never lay a glove on him.

Schlesinger never got that memo.

In fact, by the second debate, Schlesinger and Lamont had developed a little tag-team wrestling act where one of them would hold Lieberman while the other punched him. Schlesinger described to Lamont a worker who failed to get the job done for 18 years.

"It's time to go," Lamont answered.

"You're fired," added Schlesinger, smirking at Lieberman, because that's how he is.

With nothing to lose, Schlesinger will go on the attack again Monday night. The Lamont crowd, accordingly, now treats Schlesinger like a folk hero, even though Schlesinger has lobbed plenty of abuse at Lamont too. Schlesinger charges that Lamont is light on solutions and is a left-winger like Lieberman, whom he likes to characterize as the most liberal of all 100 U.S. senators. Since Lamont seems unable to help himself these days, his supporters are hoping Schlesinger will lend a hand by taking votes from Lieberman. Schlesinger bristles whenever he hears this. "Those are my votes," he snaps. "Joe took them away from me in the first place."

Lamont even used a little of his allotted time in the first debate to giving Schlesinger some "Hang in there, Alan" encouragement. Lamont cited himself as an example of a candidate who overcame long odds and said Schlesinger could do the same, which is a strange point to make, since Schlesinger's stated goal is the destruction of both Lamont and Lieberman.

"If the press gives me a chance," Schlesinger insists, "I'll win the election."

Well, perhaps not. After two strong debate appearances, Schlesinger's poll numbers immediately skyrocketed all the way up to ... 8 percent.

In those measly eight points, however, lies possibility. In a normal Senate race in Connecticut, a can of tuna running as a Republican finishes in the low 30s. In 2000, Waterbury Mayor Phil Giordano captured 34 percent running against Lieberman. Giordano was captured himself a few months later and is currently a 37-year guest of the federal prison system. Federal agents were wiretapping him in a corruption investigation, which they had to compromise because they overheard him arranging sex through a prostitute with two little girls. Think about that. His sex crimes were so vile, it was impossible to continue investigating him for corruption.

Nobody knew that in 2000, but nobody confuses a guy like Giordano with Jacob Javits either, and still he got 34 percent. Six years before that, Lieberman faced a nonentity named Gerry Labriola. Very nice fellow, but pretty much the goat staked out for the T. Rex in "Jurassic Park." He pulled 31 percent.

Now a three-way race is different, I grant you, but all of the above tells me there is some kind of baseline number of Connecticut residents who always and only vote Republican. And that number is larger than 8 percent.

"You can't poll ballot position," he reminded me this week. "The polls are underestimating my support from that."

Schlesinger is on the top line of the ballot, pretty much jowl-by-cheek with M. Jodi Rell, Connecticut's unreasonably popular incumbent governor. Rell is beloved mostly because she is not her predecessor, John G. Rowland, lately discharged from federal prison. Believe me, the guy who took over from Sauron got 57 percent of the vote in Middle-earth, and Rell will get 57 percent too.

Lieberman, meanwhile, is "Where's Waldo?" on the ballot, a crossword puzzle coordinate on the order of five down and three across. Schlesinger told me he saw one ballot -- they vary by town -- on which Lieberman is all the way down on line seven.

Lately, Schlesinger, Rell and GOP state chairman George Gallo all seem to have made up a bit. Gallo even steered a token $5,000 to Schlesinger's campaign. Rell said something nice about him in her own first debate with her Democratic challenger and declined to endorse Lieberman. This is tepid support, but at least it's not all-out sabotage.

But to the national party, Schlesinger remains an obstacle at best. Bush advisor Karl Rove called Lieberman the day he lost the Democratic primary in August. Rove didn't call Schlesinger, the nominee of his own party. Rove, George W. Bush, Dick Cheney and other Republican figures who continue to praise and aid Lieberman have not reached out to Schlesinger, and he has given up hoping to change their minds.

"They had so much invested in Joe Lieberman as 'our kind of Democrat' because of Iraq that they can't pull the rug out from under poor old Joe now," he says. "They made their bet."

That is probably the wrong turn of phrase for a guy who has been hurt by the disclosure that he used a fake name on a "Wampum Card" (sort of a frequent-flier deal for bettors) while gambling at the Foxwoods Casino in eastern Connecticut. Pretending to be someone named Alan Gold would seem a harmless offense had not several lawsuits by casinos seeking unpaid debts also surfaced. Schlesinger settled those more than a decade ago. He denies having a gambling problem.

"I am so recreational," he claims. "I am so busy these days that I can't even go when my friends ask me. I think I've been once this year. It was a stupid story from the get-go. With all the stuff that's going on, all they can do is pick on me for my Wampum Card?"

Meanwhile, he has emerged as the H. Ross Perot of this election. In 1992, Perot was a screwy spoiler who hurt the incumbent more than he hurt the challenger. "I'm a lot more mainstream than Perot," notes Schlesinger.

As of Monday, Lieberman was showing leads of 12 and 17 points in the polls. Those numbers are probably wrong, because of the Schlesinger factor. He will get more than 8 percent. If he can jack himself up to 17 on Election Day, we may be up late figuring out who won.