State of the unions

Religious conservatives seize on New Jersey's ruling for same-sex couples -- but it won't save Republicans at the polls. 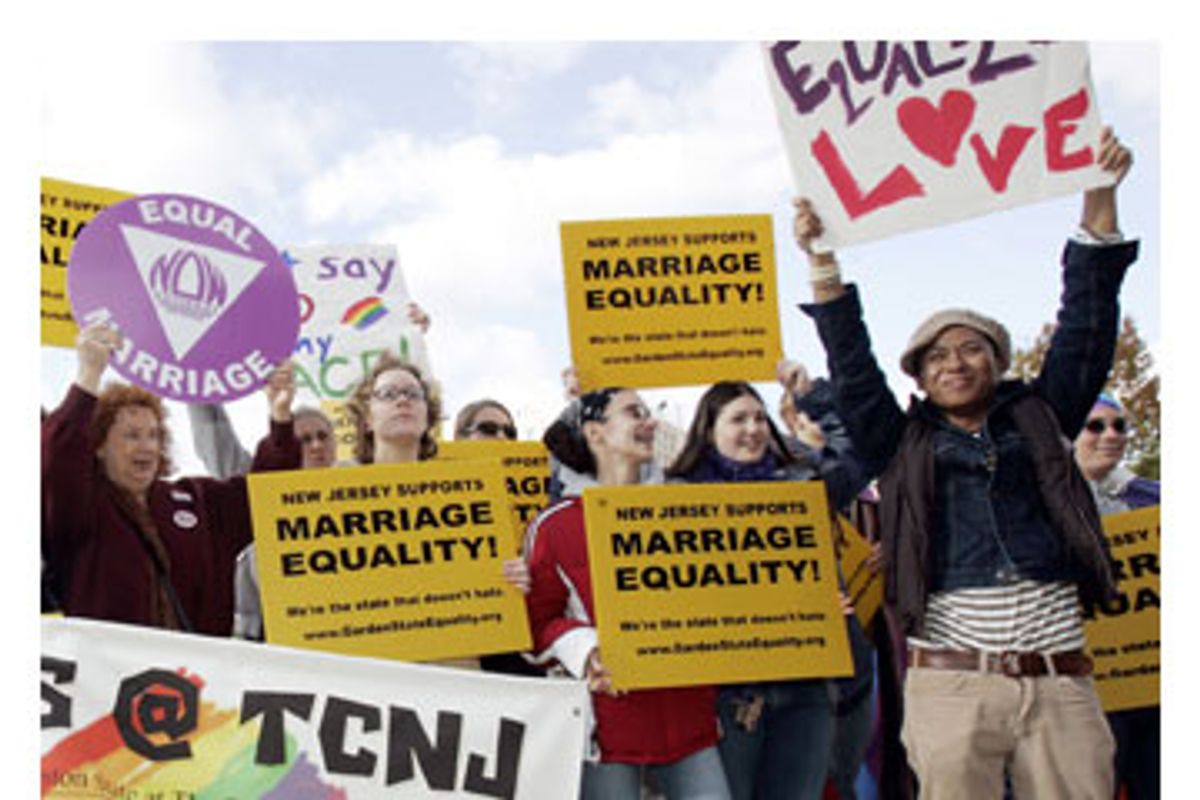 The New Jersey Supreme Court unanimously ruled Wednesday that its state constitution requires same-sex couples to be given the same set of marital rights and privileges granted to opposite-sex married couples. But the court, by a 4-3 margin, rejected the claim that same-sex couples have a constitutional right to have their relationships recognized as "marriages," ruling instead that only the Legislature has the power to decide whether the institution of marriage in New Jersey should include same-sex couples.

From a purely legal perspective, the decision is of narrow and limited significance. How Republicans may seek to use it politically in the final days before the midterm elections is another matter.

The lawsuit was based exclusively on provisions of the state constitution, not the U.S. Constitution or any federal laws. As a result, the court's ruling is confined to an interpretation and application of the rights guaranteed by the New Jersey Constitution. The decision is unreviewable by the U.S. Supreme Court or any other court, but neither is it binding on any courts outside New Jersey or relevant to any other state's laws.

The court's decision came in the case of Lewis v. Harris, in which seven same-sex New Jersey couples argued that the state's marriage laws violate the state constitution's guarantee of equal protection and basic liberties by granting certain marital rights only to opposite-sex couples and by excluding gay couples from the institution of marriage. New Jersey enacted a domestic partnership law two years ago that extended most, but not all, marital rights to same-sex couples. The court today merely ruled that those partnerships are entitled to all of the same rights as married couples.

By issuing a compromise decision, the New Jersey Supreme Court likely avoided setting off what might have been a political earthquake less than two weeks before the midterm elections. Had the court required the state to recognize same-sex marriages -- as many observers thought it might do -- that could have had an unprecedented impact on every other state in the country and triggered all-consuming political debates. Instead, the court's ruling is merely a replica of the ruling issued back in 1999 by the Vermont Supreme Court.

In 1999, the Vermont Supreme Court become the first court in the country to rule that its state constitution gives same-sex couples access to the same legal rights as opposite-sex couples. But the Vermont court expressly refused to require that gay marriages be recognized, ruling instead that it was up to the Legislature whether to call such relationships "marriages," civil unions or something else. In response, the Vermont Legislature enacted a domestic-partner bill but did not recognize gay marriage. Though controversial, the impact of the Vermont decision was limited to Vermont residents.

The legal scope and political impact of the ruling in New Jersey are limited in precisely the same ways. In 2004, Massachusetts became the first state to recognize gay marriages, but a long-standing Massachusetts law prevents out-of-state gay couples from marrying there. New Jersey has no such law, and recognition of gay marriages there would have led to waves of gay couples going to New Jersey, getting married, and then demanding full marital rights in their home states.

Despite the New Jersey court's refusal to go that far, religious conservatives immediately sounded the alarm over the decision. Hugh Hewitt misleadingly announced that "the imperial judiciary imposes same sex marriage in New Jersey," while James Dobson of Focus on the Family urged his followers to vote on Nov. 7, warning them that "nothing less than the future of the American family hangs in the balance."

Although a majority of Americans still oppose gay marriage, polls have shown for some time that most Americans also support recognition of same-sex civil unions and believe that gay couples are entitled to equal marital rights. Thus, a court ruling that simply requires equal treatment of gay couples -- as opposed to forcing an acceptance of gay marriage -- is unlikely to trigger much alarm beyond the fringes.

It's possible that Republicans will attempt to seize on this ruling and try to exploit it for political gain. Less than two weeks before an election in which every poll shows them trailing, Republicans are presumably eager to find an issue with which to change the subject from the debacle in Iraq and pervasive corruption within their party. But if exploiting social issues is part of the strategy down the home stretch, the campaigner in chief gave no indication on Wednesday. In his hourlong White House press conference, which focused on Iraq, President Bush, asked what the outcome of the elections will hinge on, boiled it down to two issues: protecting the American people and lowering taxes. That he did not even allude to social issues was consistent with Karl Rove's previously announced midterm strategy of focusing almost exclusively on taxes and security issues.

Of course, Republicans have exploited the issue of gay marriage with great success over the past three national elections. As Southern Poverty Law Center president Richard Cohen put it in June 2006 in Rolling Stone: ''The gay issue has taken the place of the race issue for the Republican right. This is true not only in the South but nationwide.''

Yet, aside from the limited and seemingly inoffensive nature of today's ruling, the Republicans' ability to milk the issue of gay marriage generally seems to be waning. Since 1998, voters in 20 states have approved ballot referendums expressly banning gay marriage, often with as much as 75 percent of voters in favor of such bans. Eleven anti-gay-marriage referendums passed easily in 2004 alone. The lowest level of support was found in Oregon in 2004, where "only" 57 percent voted against gay marriage.

But this year, polls show much weaker support for these referendums. Even in red-state Virginia, polls reveal that the referendum banning gay marriage is leading by a relatively narrow 53-43 margin. Polls in Colorado and Wisconsin show a similar tightening of public opinion.

Given the public's growing acceptance of civil unions, and even its weakening opposition to gay marriage, it seems doubtful that the New Jersey Supreme Court's decision will be of much use to Republicans -- either in galvanizing their dispirited base, or in changing the minds of those intent on throwing them out of office.