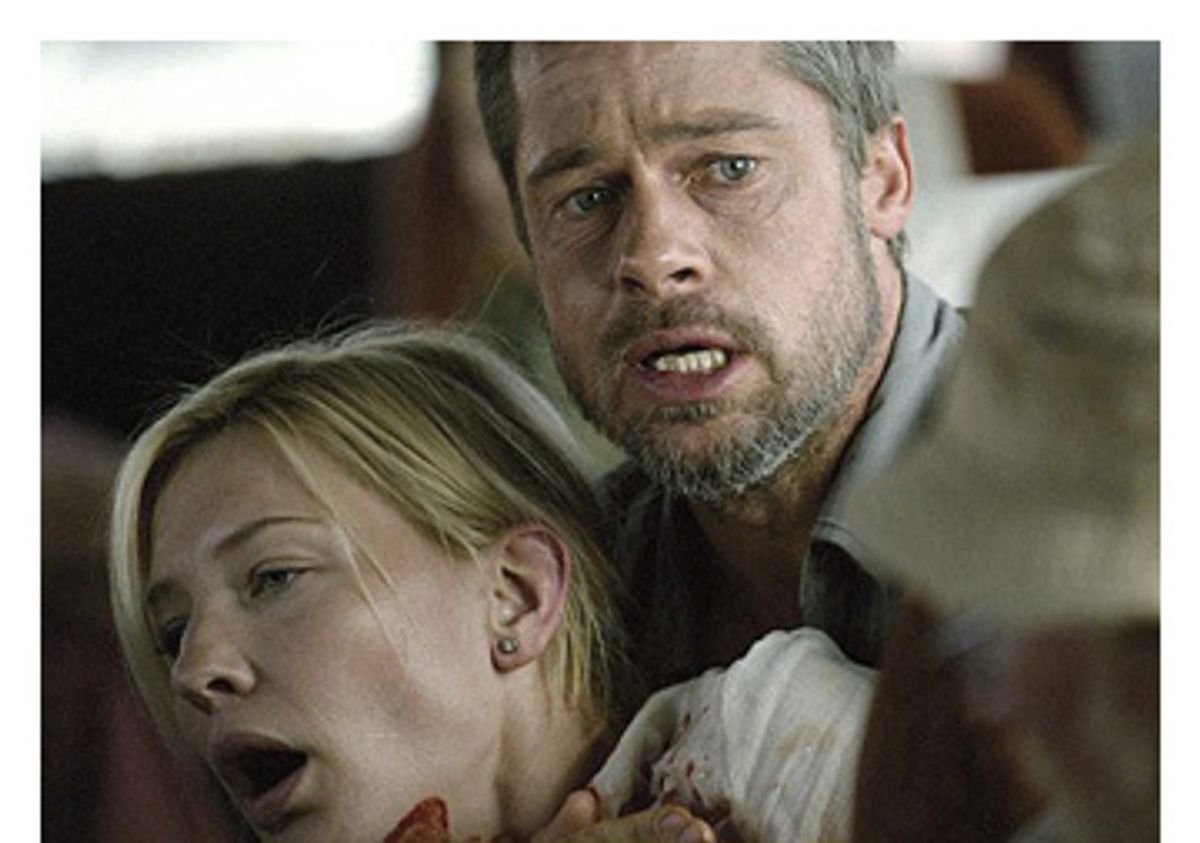 I've seen "Babel" twice now and had exactly the same reaction both times, which is pretty unusual in itself. An hour or so in, I found myself swept up in the picture, utterly seduced by its ambitious blend of colors, cultures and sensual experiences. It felt like a transformative experience, the kind of movie that reaches for the ineffable, combining prodigious cinematic technique with impressive human range. Then, somehow, over the last third of the film the energy gradually dissipates, leaving me asking a question that in this case doesn't bear close scrutiny: What is this movie, shot on three continents in at least seven languages, actually about?

There's a marvelous scene just past the halfway point, where we experience the pulsing light and sound of a Tokyo nightclub through the eyes and ears of a deaf teenage girl. Or, to be more accurate, we go in and out of her perceptions: Sometimes we see Chieko (the lovely Rinko Kikuchi) from the outside, seeing her captivated by the press of dancers, the explosive overhead light show, the dance remix of Earth Wind and Fire's "September" blasting on the soundtrack. And sometimes we see and hear the club from her point of view, with the music reduced to a floor-thumping bass beat and a dull, whispering roar.

It's the kind of electrifying, almost ecstatic moment that reveals Mexican director Alejandro González Iñárritu ("Amores Perros," "21 Grams") as one of the purest talents to emerge in this medium since Martin Scorsese. Beyond cinematic daring, the nightclub scene seems to reflect or capture, if only for an instant, the themes that González Iñárritu and screenwriter Guillermo Arriaga fumble with over the course of this sprawling two-hour-plus film. We are all connected, your experiences of joy and pain are closely akin to mine, but we can only pierce each other's consciousness in fleeting, split-second increments.

Personally, I believe all that, or I think I do. But the risk that "Babel" takes, in laboriously and lovingly connecting the private tragedies of four families in four different countries, is turning that observation, which may be lovely as a momentary flash of insight, into a stoned college freshman's profound theory about the universe. Tremendous resources have been expended here so that Cate Blanchett can lie on a dirt floor and moan, while we ponder why we can't all get along, and whether we aren't all the same under the skin.

Last spring at Cannes, González Iñárritu won the best director prize for "Babel," which seemed to me, even at the time, like a way of saying: We can't tell if the movie's any good in the end, but it sure looks great. (The cinematography, as in his other films, is by Rodrigo Prieto.) Mind you, the journey in this case may be well worth it, even if the destination turns out to be the same dusty corner we started from.

Richard (Brad Pitt) and Susan (Blanchett) are a California couple taking a bus tour through the Moroccan desert, in an attempt to repair their failing marriage. In the mountains they're passing through, a Berber farmer named Abdullah (Mustapha Rachidi) has just bought a rifle to protect his goat herd and entrusted it to his sons, Yussef (Boubker Ait El Caid) and Ahmed (Said Tarchani). Back in San Diego, Richard and Susan's kids, Debbie (Elle Fanning) and Mike (Nathan Gamble), are under the care of Amelia (Adriana Barraza), their beloved nanny, who needs some time off to visit her home village in northern Mexico for her son's wedding.

Something goes badly wrong in Morocco, though, and you can probably guess what. (This plot point is revealed near the beginning of the film, but if you really don't want to know more, move on to another article right now.) Hanging around on a desolate slope with the goats, Yussef and Ahmed persuade each other to take potshots at various distant targets. They shoot at the bus from a mile or more away, not understanding that they're firing a high-powered Winchester hunting rifle. They turn away, bored with the game. And then the bus screeches to a stop, and they hear distant screaming.

So begins an odyssey that will bring Richard and the critically injured Susan to a remote Berber village, where a veterinarian -- the only "doctor" anywhere in the vicinity -- stitches her wounds without anesthetic and an old woman gives her something to smoke that eases the pain. (One guess!) Meanwhile, Abdullah's family becomes the object of a manhunt by the ruthless Moroccan police, and the U.S. government makes angry noises about terrorism.

Arriaga and González Iñárritu have structured "Babel" so that we already know the ending of Richard and Susan's story before it begins. This is a technique (mastered, in literary form, by Stephen King) that always works better than it should: For some reason, telling the audience what will happen, but withholding the details, only heightens the suspense. We don't know, however, what will happen to Amelia, who can't find anybody else to sit for Debbie and Mike and impulsively decides to take them to Mexico in the tricked-out Virgin-of-Guadalupe ride driven by her nephew Santiago (Gael García Bernal).

All the story lines in "Babel," even the one about Chieko and her doleful business-tycoon dad (the great Japanese actor Koji Yakusho), involve children in peril and will engage the most elemental fears of any parent in the audience. I'm not sure if this is actually cheating or not, but there's certainly nothing subtle about this movie's emotional appeal. Even though these events are not contemporaneous, what we see is Susan, bleeding out in somebody's stone hut deep in the desert, while her kids cross the Mexican border for parts unknown, in a car driven by a total stranger.

González Iñárritu wants to engage the majority audience's likely prejudices but also tweak them in a few different directions. It's clearly not a brilliant idea for Amelia to take these two blond-white children on an impromptu road trip to some dusty hamlet of white plastic chairs, Corona beer and norteño music -- but why not, exactly? Anybody who's traveled to Mexico with children knows how incredibly helpful and solicitous Mexicans are toward little kids, and Amelia's love for Debbie and Mike is palpable. So they'll learn some new Spanish phrases, eat some new kinds of food, see chickens killed by hand and drunken men firing pistols in the air -- what's the problem?

Of course the director and screenwriter are on home turf in Mexico, and I don't think gringo filmmakers could get away with a character like Santiago, a cheerful lowlife borracho whose pent-up resentment ultimately leads his little traveling party into big trouble. Bernal lets his dubious sideburns do most of the talking in this part, but it's a masterful, economic performance. Ultimately, Barraza's noble, flawed Amelia feels like the tragic heroine of the entire film. In contrast, the film's purported stars don't make much of an impression. They never do anything remotely unexpected; Blanchett yowls convincingly into her blankets, while Pitt sets his glorious American jaw and curses out everybody within earshot.

Amelia and Santiago's story, in fact, is a lot more interesting and original than the Yanks-in-danger saga of Susan and Richard, which, thanks perhaps to its movie star cast and "exotic" setting, feels more and more like a conventional Hollywood thriller as it goes along. Chieko's quest for love (or at least for action) deep into the Tokyo night also possesses a thrilling energy and haunting power that's quite different from anything in the film's central narrative.

What does the Mexican-Moroccan storyline have to do with Chieko, you may be wondering? Almost nothing. She sees reports about the American tourists shot in Morocco on TV and keeps flicking through the channels; a circumstantial connection is finally revealed, but it's a mighty thin one. I guess that's the point: Our actions may have consequences we can't imagine, halfway around the world; when a butterfly bats its wings a baby is born, and all that. OK, but in the case of "Babel" what that produces is two powerful and intriguing mini-films whose only connection to each other is a third one that's barely half as good.

My own reluctant conclusion, after three films of González Iñárritu's career, is that he's a brilliant, intuitive director who's also kind of an intellectual lightweight. That's no crime when it comes to filmmaking; nobody ever accused Scorsese or Fellini or Hitchcock of philosophical profundity either. I hate to criticize anybody for artistic ambition, but the problem with "Babel" isn't that it's a bad movie. It's a good movie, or, more accurately, it's several pieces of good movie, chopped up in service of a pretentious, portentous and slightly silly artistic vision.