Ken Mehlman's cynical effort to inflame white bigotry in Tennessee is no different from what the Republicans did in their infamous 1988 "Willie Horton" ad. 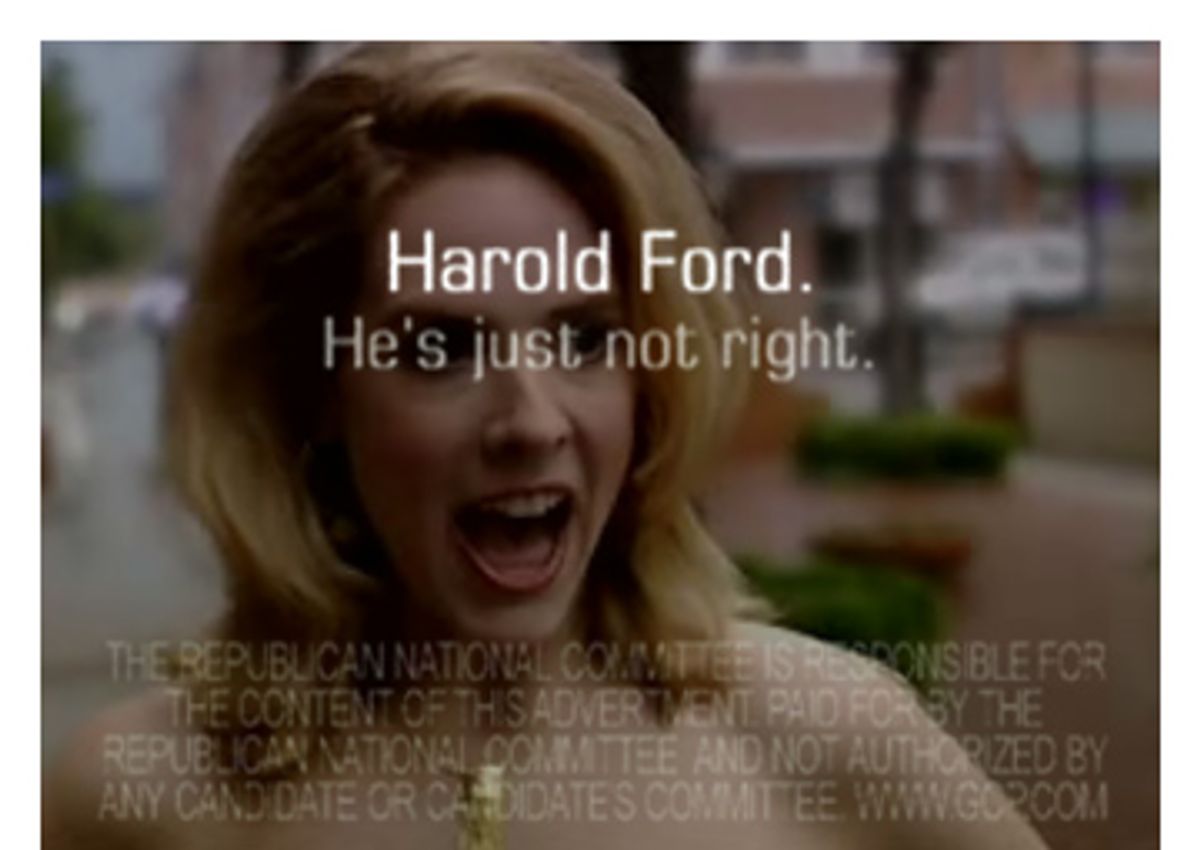 As chairman of the Republican National Committee, Ken Mehlman bristles at accusations that his party uses racial polarization to win elections. Those were the bad old days, he insists, and those awful tactics have no place in today's shiny new, inclusive GOP or in a Bush administration that has boasted two African-American secretaries of state and the first Latino attorney general. He even went so far as to apologize, at last year's NAACP convention, for the polarizing tactics employed by his predecessors.

But whatever uplifting message he may utter when he addresses black audiences at other times, Mehlman at election time is precisely the same as the bad old party bosses who exploited race to win. He is exactly like them, too, in his desire to profit from those tactics while evading responsibility for them.

The case in point today, of course, is the obnoxious television attack ad that recently targeted Rep. Harold Ford Jr., the Democratic Senate nominee in Tennessee, who's bidding to make history as the first black senator from below the Mason-Dixon line since Reconstruction. That Republican National Committee-sponsored commercial features an apparently unclad blonde actress who says she met Ford at "the Playboy party" and ends with her beckoning to him while she winks and coos, "Harold ... call me."

How bad is it? Bad enough to provoke "Hardball" host Chris Matthews, no proponent of political correctness, to refer to the "Mehlman cesspool" at the RNC.

Taken off the air in most of the state's markets by now, that offensive ad achieved saturation in the Tennessee electorate with heavy rotation and extensive news coverage. A literally naked attempt to inflame white bigotry about interracial relationships and white fears of black male sexuality, the anti-Ford ad was certainly the most blatantly racial political spot since the infamous "Willie Horton" episode of 1988.

The Willie Horton ad was a crude production that showed an extremely menacing mug shot of a black criminal with an unruly Afro to portray Democratic presidential nominee Michael Dukakis as a soft-on-crime liberal. Horton was a convicted killer who had escaped while on furlough from a Massachusetts prison and attacked a white couple in Maryland. Although the record of Dukakis as governor, including Horton's escape, was fair game, nonpartisan observers criticized the ad for seeking to inflame racial fears.

When the Horton commercial stirred controversy, Republican nominee George H.W. Bush and his campaign team (notably including media consultant Roger Ailes, now the president of Fox News Channel) denied any connection with its production. Like the anti-Ford ad, the Horton piece was supposed to be the creation of an "independent committee." Federal law forbade any coordination between the official campaign and the group that purchased and produced the independent ad.

But in due course, certain facts about the Horton ad came to light. The adman who produced it had formerly worked for Ailes and had been in touch with him during the period when the ad was produced. The postproduction house that worked on the ad had simultaneously performed work for the Bush-Quayle campaign. The researcher who had worked on the ad had left the Bush-Quayle campaign and later turned up as a patronage employee of the first Bush administration.

All those circumstances led to suspicions and a Democratic complaint to the Federal Election Commission, which eventually shelved its investigation on a party-line vote. What remains relevant is the cynicism of Republican leaders then -- and how that cynicism is perpetuated by the likes of Mehlman now.

Back in 1988, the Bush-Quayle campaign wanted to profit from the emotions aroused by the Horton ad without suffering the taint of racism. So George H.W. Bush and his campaign manager, James Baker III, both denounced the ad, after everyone who might be interested had already seen it. They covered their butts by mailing a terse letter to the independent committee that produced it, demanding that the committee desist -- when that letter would no longer have any force.

The ever-sensitive Mehlman, who constantly boasts about his party's (mostly unsuccessful) outreach to African-Americans, isn't even as careful as the Republicans were in 1988. Disingenuously, he claims to see no racial aspect in the anti-Ford ad. Indeed, both he and White House press secretary Tony Snow have defended it.

"I think that there is nothing more repugnant in our society than people who try to divide Americans along racial lines," Mehlman told Tim Russert on NBC Tuesday. "I just happen to disagree about the characterization of this ad." Snow went much further by attempting to blame the uppity victim. "I think there is always an attempt when you have got an African-American candidate to try to attribute something to the race card," he said.

Even though the RNC paid for the ad, which carries the RNC endorsement, Mehlman claimed that he could not lawfully prevent its broadcast, which was the responsibility of the "independent" committee he appointed to spend the RNC money. Nobody should take his word for that -- nor for the supposed independence of the group behind that ad. Both should be investigated by the media and if necessary by the federal authorities.

There is simply too much history -- and too little reason to believe anything Mehlman says. Like Baker, Ailes, Bush and late political strategist Lee Atwater, he wants to win dirty without having to get dirty, and he doesn't seem to notice when the sewage is up to his neck.