I tried to persuade my Bush-hating, Baptist mother to vote to legalize marijuana in Nevada -- but she wouldn't believe her Savior was cool with pot. 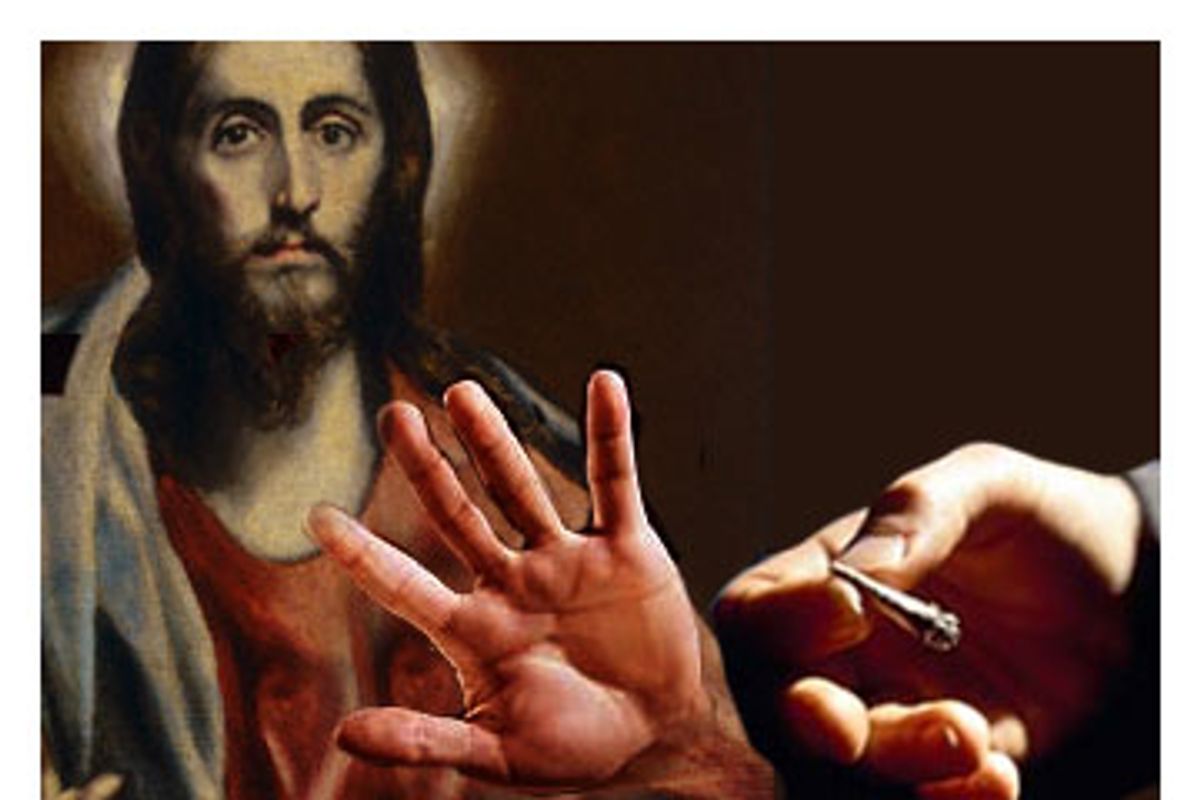 Until today, and like most decent people, I had little sympathy for the consultants and K Streeters who earn millions figuring out how to get people to vote their way. Then I tried to convince a 78-year-old Southern Baptist, a former Mississippi sharecropper with an eighth-grade education and the intellect of Thomas Jefferson, to vote to legalize drugs. My mom's a retired manual laborer in Nevada, where there's a ballot initiative aiming to do just that, and she called for help deciphering her absentee ballot.

Voting has always ranked perhaps half a step behind Jesus and fried pork chops with her, and ever since 2000, when "that old Bush stole the election," she has become somewhat deranged on the subject. She spends months at a time on the road visiting her six children, nine grandchildren and five great-grandchildren, and is convinced that the CIA does little apart from either shredding or altering her absentee ballots, otherwise the Democrats would win. "You can't put nothing past the Republicans, nothing! Deal with the devil for a dollar."

I've stopped telling her the statistics on the number of blacks who voted GOP in 2004 ("ain't nobody black voted for those devils") and don't have the heart to remind her that both Colin Powell and Condoleezza Rice are Republican because it makes her so sad, the way they must be breaking their mothers' hearts.

This election, she's sure that her ballot alone, correctly filled out, will make all the difference. So if the GOP stays in power, she will only have me to blame. After making me swear repeatedly as a member of the bar and a former military officer that it was legal to discuss her ballot with me (I finally pretended to go to her local registrar's Web site), I saw my chance to get my money's worth from all those college loans. You'd think the daughter she scrimped and slaved to provide with a fancy education would know better, but you'd be wrong. It went something like this:

Me: You're going to vote to legalize marijuana, right?

Me: You know. Get the dealers out of the loop and make sure the supply is safe? It'll raise (quick Google) as much as $30 million in revenue. Already no state tax and, with this, you might even get a big refund. (That could be true, right?) More senior services? (Cheap shot: My mother demands a senior citizen discount at hot dog carts). Ma?

Me: (Chuckling condescendingly) And what would Jesus say about criminalizing marijuana? It's no worse than wine and didn't he turn water into --

Mama: Jesus didn't smoke no weeds! (Never noticing the snickers, she's been calling it that since I was a teenager in the '70s.) And the water back then made you sick. He was saving folks! I know you're not trying to call Jesus a ... a drug boy? (That's what the old folks in the hood call the low-level knuckleheads who deal drugs on the streets.)

Me: (I spend a moment picturing the Savior with a grill, pants hanging down his holy ass.) I'm not calling Je -- (determined sigh). You know, Mom, in Europe you can get heroin in bars, prostitution is legal. Clean needles, clean girls, no pimps --

Mama: (Frightened pause) Are you smoking weeds now? Is that why you're talking so crazy? Tell me you ain't on the dope, Debbie, please.

Mama: (Mollified. She's always bought my good girl shtick. I got away with murder.) Talking like this when you know what your Aunt Edna went through with her boys. Now she's got the glaucoma and the twins keep selling her prescription. What they don't sell they smoke themselves, don't even share it with her. Poor thing has to keep her stash in her Bible. She says she only takes a puff a day, but with those kids and grandkids of hers?

Mama: (Prissily) You kids think I don't know, but I know what's going on.

Me: What did Madonna just do?

Me: Never mind. (Bitchily, now, 'cause I'm frustrated.) And, anyway, Aunt Edna was always such a "rhymes with witch," her glaucoma was the best thing that ever happened to this family. (Not even a drunk-ass Andy Dick would curse in front of my mother.)

Mama: Don't you disrespect Jesus and your auntie. I raised you better than that. (I can hear her eyes narrow and her bony finger jabbing at the mouthpiece. I'm frightened. There was no Child Protective Services when I was a kid and I know this tiny woman still wouldn't hesitate to take me out.)

Me: (Sitting up straight) Yes ma'am.

Mama: You'll never be that grown or that smart.

Me: Yes ma'am. But legalizing marijuana would --

Me: Why on earth would I help your cousin Junior get more of them weeds? You remember how he took the Family Reunion BBQ money and bought drugs? Smoked up a whole picnic 'fore your Uncle Son tracked him down.

Me: Wha? I'm confused. Oh yeah, good point, Mom. If it were legal, weed would cost less and folks like Junior wouldn't have to steal to get it. (Then he could get just as high as every one else got drunk at family functions, but perhaps that point wouldn't help my case overmuch, so it goes unsaid.)

Mama: How does one boy smoke a whole picnic? Twenty years later and that boy still ain't right, all them drugs. (Much tsk-tsking) He won't ever be getting out of your auntie's basement, and you want me to help him be, just, nothing?

Mama: Well, do you want Junior to be something or not?

Me: Well, he might still be nothing, but he wouldn't be a criminal.

Mama: (Triumphantly) And if I voted for drugs, I wouldn't be a Christian.