A new contract with America

GOP corruption and an unpopular war bring an end to Republican domination in Washington -- and leave President Bush answering to a new Democratic majority. 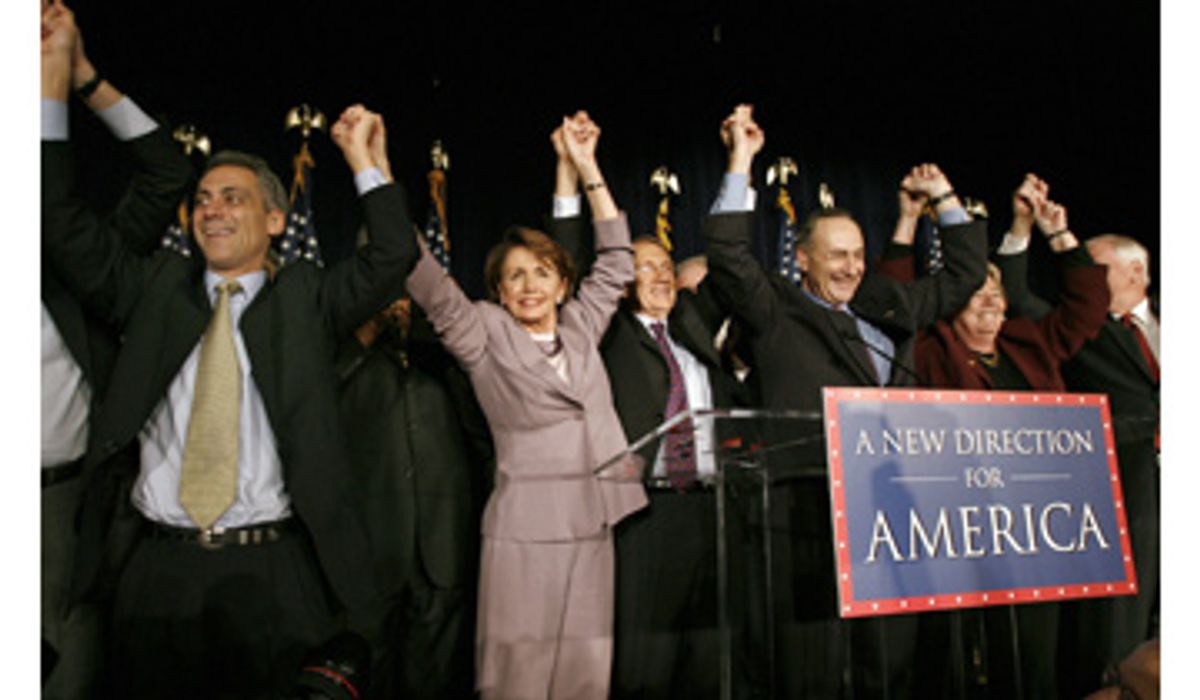 "This is not a Republican victory. It's not a Democratic victory. It's about the American people making a set of choices." -- House Speaker-to-Be Newt Gingrich in Marietta, Ga., on Election Night 1994

Twelve years later, the American people have made another set of choices, erasing the once impregnable Sun Belt-based House conservative majority that Gingrich and his successors worked so hard to maintain. But corruption will do that to you -- the outright money-for-favors corruption that pointed two GOP incumbents toward prison, the see-no-evil corruption that caused the House Republican leadership to wink at Mark Foley's preying on congressional pages and, most of all, the corruption of the idea that Congress is an independent branch of government.

The resurrection of the legislative branch is no longer in doubt after a dramatic election in which the Democrats picked up about 30 House seats (a few races are still being tabulated) and also (pending recounts in Virginia and perhaps Montana) may have assembled a Dick Cheney-proof one-vote Senate majority. The magnitude of the seismic shift is underscored by this never-before-in-modern-politics fact: Not a single Democrat-held Senate or House seat or governor's mansion went Republican.

After six years in which the brass-knuckle politics personified by Karl Rove, the White House political Rasputin, has left the Democrats on the defensive, suddenly it is America's supposed governing party, the Republicans, that is in full retreat. Nothing better conveys the changed public stance of the George W. Bush spin machine than two lead headlines Wednesday in the daily "Morning Update" put out by the president's press office: "White House Press Secretary Tony Snow States 'The President Has Got a Very Active Agenda for the Next Two Years'" and "President Bush Is 'Looking Forward to Working With the Democrats.'"

The White House assertion of Bush's supposed "active agenda" evokes memories of Bill Clinton's desperate claim that he was still "relevant" after the 1994 Gingrich revolution. And while commentators on the Wednesday morning TV shows were dusting off the old chestnut that Bush operated in a bipartisan fashion as governor of Texas in the 1990s, it is far too late in the president's lease on the White House for anyone to fall for his "I'm a uniter, not a divider" hyperbole from the 2000 campaign.

With memories so short in politics that operatives have to review their old talking points to remember what whoppers they peddled last week, it is easy to lose perspective on the magnitude of the Democratic comeback. At the beginning of this year, the conventional wisdom was that computer-based mapping and cynical gerrymandering all but guaranteed a GOP stranglehold on the House, even in the face of the Iraq war and Bush's plummeting polls. While a six-seat pickup in the Senate was considered in the theoretical realm of possibility, Harry Reid as the new majority leader seemed about as likely as finding Bush's face added to Mount Rushmore.

Now when the 110th Congress convenes in January, Nancy Pelosi will be the first Democratic speaker in 12 years. She will also be the first woman ever to hold that post -- or to rank as high as third in the order of presidential succession. But more important than any specific Pelosi or Reid congressional agenda (any major legislation would almost certainly be vetoed by the lame-duck president) is the return of accountability to government and the end to the debilitating cycle of Democratic defeatism.

Sensitive to the pre-election charge that the Democrats were nothing more than the anti-Bush party, Pelosi issued a glossy 31-page booklet ballyhooing "A New Direction for America." But few should scrutinize the details behind such big-type promises as "A Competitive Small Business Environment for Innovation" for clues as to the intentions of the House Democrats. The next two years will be less a time for Pelosi and Reid to reign as legislators than a moment for them to rein in the excesses of the Bush presidency.

But Pelosi and Reid will actually have a short tenure as the public faces of the resurgent Democrats. By mid-2007, the presidential races in both parties will dominate political coverage, not Capitol Hill skirmishing over the budget. Reid's task -- even if the Democrats are victorious in the still knotted Virginia and Montana Senate races  will be particularly tricky in light of the preening ambitions of his colleagues. At the moment, at least seven Senate Democrats (Hillary Clinton, Barack Obama, Joe Biden, Chris Dodd, Evan Bayh, Russ Feingold and, yes, John Kerry) are seriously considering 2008 presidential bids. And a vindicated Joe Lieberman, purged by Democratic primary voters in Connecticut but triumphant as an independent on Tuesday, undoubtedly will be reveling in his chosen new identity as Senate bipartisanship incarnate.

With no exit polls to shape the interpretation of House race results, any attempt to fully assess the meaning of Tuesday's vote is premature. Still, there were unmistakable signs that the Northeast has become as solid a Democratic bailiwick on the congressional as well as the presidential level as the red-state South is Republican. The Democrats picked up a minimum of nine House seats in just four states in the region -- New Hampshire, Connecticut, New York and Pennsylvania -- with two GOP seats in Pennsylvania and one in Connecticut still undecided. Few House upsets were as stunning as that of the unheralded Carol Shea-Porter, an underfunded grass-roots candidate dismissed as nearly hopeless by the Democratic Congressional Campaign Committee, upending two-term incumbent Jeb Bradley in New Hampshire's 1st District.

The Ohio River Valley also contributed to the Democratic victory margin, though in a less dramatic fashion than expected. The long count began Tuesday evening with three GOP congressmen going down to defeat in Indiana, along with five-term Republican Anne Northup, a survivor of prior tough races, across the river in Louisville, Ky. But in Ohio -- where the statewide Republican ticket of Sen. Mike DeWine and conservative gubernatorial contender Ken Blackwell went down to a smashing defeat -- the Republican turnout operation saved vulnerable incumbents Deborah Pryce (who holds the fourth-ranking post in the House GOP leadership), Steve Chabot and probably Jean Schmidt from premature retirement.

Still, Ohio was the rare exception as the Republicans learned that the House is not a home. The national Democratic sweep gave rise to two rival explanations. Either Karl Rove is a magician with a limited bag of tricks and he was finally hooted off the stage by voters who'd seen his act too many times before and craved something more than a campaign built around terrorism, taxes and traditional values. Or else Bush, with his can't-win war in Iraq, with his mystifying loyalty to Donald Rumsfeld, with his stillborn domestic agenda and with the aura of played-out incompetence that hangs over the White House, was too much of a dead weight for any political strategist.

There is an element of truth to both theories, since the Republicans are devoid of new issues and Bush is the same old out-of-touch president. Maybe Rumpelstiltskin could spin straw into gold, but not even the most artful Republican political manipulator could match that trick in a bad year like 2006. But the Democrats -- aided by the aggressive fundraising of Rahm Emanuel in the House and Chuck Schumer in the Senate -- deserve credit for seizing their opportunities rather than squandering them. The range of strategies that the Democrats used to build a congressional majority can be captured by the story lines of two challengers who are now headed to Washington as first-term legislators.

In southwestern Indiana, Brad Ellsworth -- the antiabortion, anti-gay-marriage sheriff of Vanderburgh County -- ran an anti-politics campaign against Republican misrule in Congress. In a district that Bush carried with 62 percent of the vote in 2004, Ellsworth virtually matched that margin (he got 61 percent) for the Democrats two years later. His hapless opponent was John Hostettler, a member of the Gingrich class of 1994, who ran shrill ads decrying Pelosi's "radical plan to advance the homosexual agenda." In a phone interview Tuesday night, Ellsworth's campaign manager Jay Howser explained the dramatic reversal: "I don't think it was an anti-Bush vote. I think it was an anti-Washington vote."

Far different from hardscrabble southern Indiana are the plush Hartford suburbs, the summer-refuge-for-New Yorkers small towns and the old-time industrial cities of Republican Nancy Johnson's district in Connecticut. Chris Murphy, a 33-year-old state senator, also ran on a platform of change in Washington. But Murphy had a secret weapon -- the unpopular war in Iraq that Johnson never aggressively questioned. The challenger ran up such surprising majorities in the affluent, traditionally Republican portions of the district that it prompted Johnson to make one of the earliest concession speeches of the evening. As Dave Boomer, Johnson's campaign manger, put it after the votes were in, "Iraq was the big-time issue. It was head and shoulders above everything else."

No one is naive enough to believe that Bush will abandon his hard-line policies in Iraq just because the president suddenly finds himself between a rock and a hard place. The no-compromises tenor of the administration was illustrated by the president's pre-election vote of confidence in Cheney and Rumsfeld -- probably the two least likely public figures to offer an olive branch to congressional Democrats. Nor is it realistic to expect a narrow Democratic majority in Congress to rewrite American military strategy. But after Tuesday's political upheaval, a heedless president is about to be forced to learn a civics lesson about checks and balances.