"Wizard of the Crow"

This inventive, surprising, madcap African political farce is like a cross between Pynchon and "A Confederacy of Dunces." 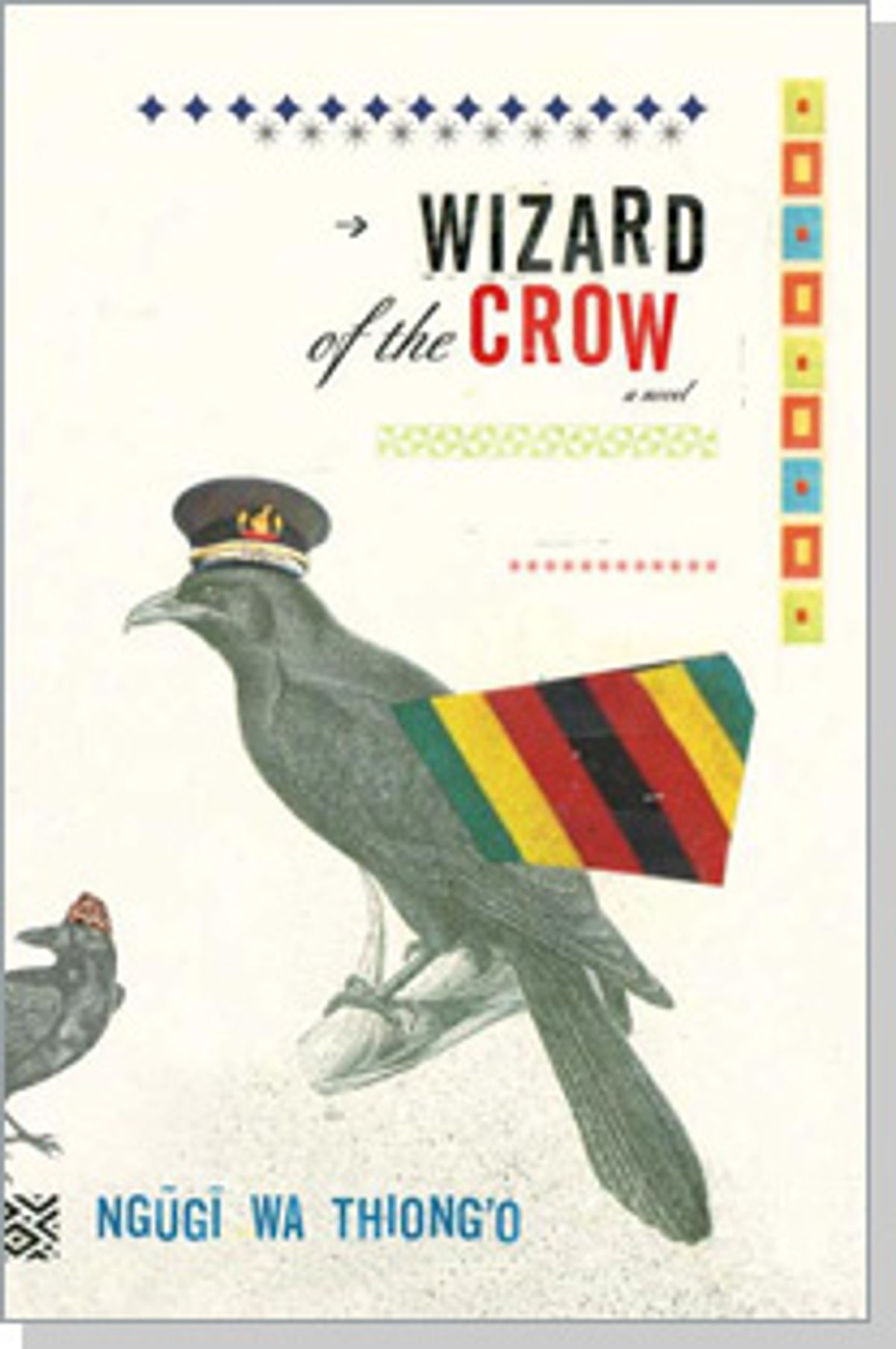 Anyone who's read "Petals of Blood," Ngugi wa Thiong'o's great, unforgettable novel of pre- and post-colonial Africa, might have expected his new book, "The Wizard of the Crow," to be the same sort of story: heartbreaking, epic, filled with characters whose tragic grandeur is nothing less than Shakespearean. Guess again: The Kenyan novelist who once secretly wrote an entire book ("The Devil on the Cross") on toilet paper while in prison has returned with what can only be called a madcap political farce. I could tell you that this book offers some particular insight on contemporary African despotism, but really, like all of Ngugi's best work, it's a triumph in spite of any specific geographical or cultural orientation. This is a tale of eternal, essential, human folly, hilarious and endlessly inventive, like a cross between a Pynchon novel and "A Confederacy of Dunces," reincarnated on African soil.

The novel is set in the imaginary nation of Abruria, where one man -- known only as the Ruler -- has been running things as long as anyone can remember. It describes the events surrounding what is at first described merely as "the strange illness" of the Ruler and the debates among Abrurians about what might have caused it. In the first few pages we learn that so absolute is his power that the Ruler can move the months and days around the calendar at will when he feels like having a birthday party and that he has punished his legal wife by shutting her up in a big house specially designed to freeze time: All the clocks are set to the same minute, the same song is played over and over again, the same meal served, the same TV and radio programs are played, all keyed to the moment when she offended him. Her crime? Suggesting that it wasn't really proper for him to be fooling around with schoolgirls.

The hero of "The Wizard of the Crow" is a well-educated but unconnected man, Kamiti, who is nearly reduced to begging on the capital's streets when the novel begins. After being humiliated by a potential employer, he is befriended by the man's secretary, Grace, who turns out to be the leader of an underground revolutionary group called the Movement of the Voice of the People. It's not always clear what the rebels want to accomplish, but they do know how to precipitate an impressive amount of chaos using only a handful of plastic snakes.

At one point, Kamiti and Grace, disguised as beggars (long story) and pursued by the police, duck into her rented rooms and Kamiti saves their necks by quickly scrawling a sign to pin to the door with some feathers and an old chicken bone. It reads "Warning! This property belongs to a wizard whose power brings down hawks and crows from the sky. Touch this house at your peril. Sgd. Wizard of the Crow." Like the Brave Little Tailor who boasted of killing seven flies with one blow to people who didn't catch the "fly" part, Kamiti sees his life hijacked by this gambit. The next day, a police constable shows up at the door humbly pleading for the powerful wizard's help in advancing his career.

Meanwhile, two scheming, sycophantic ministers battle for the Ruler's favor, and Grace's fatuous boss lands the contract to develop Marching to Heaven, a ludicrous vanity project centered around erecting the tallest building in the world and delivering the Ruler to the penthouse in a spaceship. For this, the deluded Abrurian elite fully expects to win funding from the Global Bank. The Ruler himself even ventures to America to argue the case, and is astonished to learn that he can't get onto a Sunday morning TV show called "Meet the Global Mighty." (After all, back in Abruria, he's always on TV.)

A lot of the novel's satire is as broad as that -- what else can you expect in a sendup of tinpot tyrants? But the exploits of the newly minted wizard make for a subtler comic counterpoint. No matter what Kamiti does to maintain a low profile, the Wizard of the Crow becomes more and more renowned. When his spells and advice are sought by the rich and powerful, he tries to counsel them on how to be better people, yet somehow they always manage to interpret his utterances in ways that reinforce their own petty and paranoid worldviews. (No one gets the point, even when he tells someone he can discover the identity of his worst enemy by working a charm with a mirror.)

The plot of "Wizard of the Crow" is so elaborate -- full of disguises, mistaken identities, tall tales, palace intrigue, captures, escapes, sabotage and double-crosses -- that it can't be summarized. Suffice to say there's a surprise on almost every page, all leavened with a buoyant sense of the absurdity of life in a backwater dictatorship. At one point, an ill-advised "Help Wanted" sign generates a queue that grows to Brobdingnagian proportions. People start joining it without even knowing what it's for, and when a policeman on a motorcycle heads out to find the end, he never comes back. The Ruler's ministers try to cast this as a show of support for the regime until the Movement for the Voice of the People starts organizing spontaneous queue-forming as protests, whereupon all queues are strictly outlawed. This makes waiting for the bus -- or, more precisely, getting on it once it arrives -- a nightmare.

As unlikely as it seems that Ngugi can make this sort of pell-mell zaniness work for some 700 pages, that's exactly what he does. His tone is suave and worldly, even on those occasions when the goings-on get scatological. What can you say about a novel in which a prisoner at the end of his rope manages to successfully intimidate his guards and demand an audience with a minister by claiming he has AIDS and using his cell's brimming toilet bucket as a weapon? It doesn't get much darker than that, and yet Ngugi never lets his touch grow heavy; the scene is genuinely funny. The whole novel is a kind of miracle, in which the raw, personal pain and rage of an artist once reduced to committing his work to toilet paper is transformed by his genius into a tragicomedy for the ages.