What Democrats can learn from the failure of the gay marriage ban in Arizona. 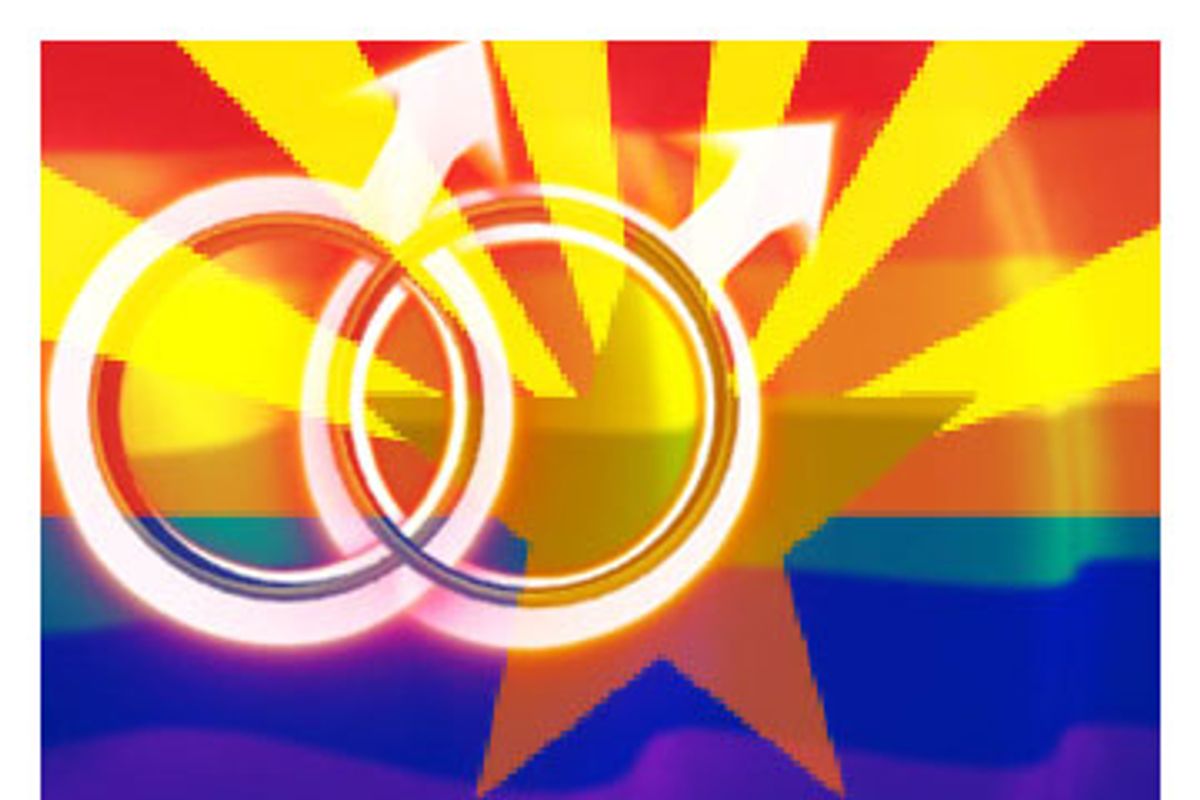 Prior to the 2006 midterm election, the closest thing to a sure bet in politics was a statewide referendum to ban same-sex marriages. Twenty states had considered such ballot measures, and 20 states had approved them, all by wide margins. The gay marriage bans were passed with an average of 71 percent approval. The lowest level of support was in Oregon in 2004, where "only" 57 percent voted for the marriage ban.

That unblemished record of success has come to an end. Arizona became the first state to reject such a referendum this month, by a 51-49 margin. In South Dakota, where voters rejected a draconian proposal to outlaw all abortions, the same-sex marriage ban passed, but with only 52 percent of the vote. And even in Colorado, home to James Dobson and a slew of socially conservative and anti-gay groups, only 56 percent of voters approved the same-sex marriage ban. What accounts for this substantial softening of support for these referendums?

It would be a mistake to interpret this trend as a sign of increasing support for gay marriage itself. While support for civil unions has been steadily increasing and is now found among a solid majority of Americans, opposition to gay marriage is still widespread. Arizona already had a statutory ban on same-sex marriages and there is little support for repealing it.

But the defeated Arizona referendum, like the one in South Dakota, would have not only reinforced that gay marriage ban, but would have also barred the recognition by state and local governments of any type of civil unions. As a result, the campaigns to defeat the referendum in both states focused not on the desirability of gay marriage, but rather on the unwarranted limitations imposed by the referendum on the ability of citizens -- gay and straight -- to secure equal benefits for their chosen relationships.

Put another way, the successful campaign to defeat the Arizona referendum was based on a generalized libertarian aversion to governmental intrusion into the private sphere, rather than support for gay marriage per se. And therein lies the most significant lesson to be drawn from the weakening support for these referendums in 2006 -- namely, the rejection by Western states of the activist social conservative agenda that has fueled the Republican Party's dominance of the South.

It is becoming increasingly apparent that evangelical social conservatism as a political doctrine sharply conflicts with the libertarian political ethos of the Mountain West. In South Dakota, for example, only 17 of 66 counties voted against the gay marriage ban, but 11 of those counties were west of the Missouri River, where the Great Plains begin to become Badlands and the Midwest turns into the West. "As you move west, voters tend to be less evangelical and more libertarian," said Jon Schaff, who teaches at Northern State University in South Dakota. "They're saying they simply want government to leave them alone."

Down in Arizona, the social conservatives who backed that state's marriage ban had a similar experience. Cathi Herrod, spokeswoman for Arizona Proposition 107, told the Baptist Press: "We're a Western state with a more libertarian bent. It's gotten harder to pass a marriage amendment."

Rove-ian visions of Republican electoral dominance depend upon solid Republican support throughout the Mountain West. Arizona, Colorado and South Dakota all delivered their electoral votes for George Bush in both 2000 and 2004, and four out of six senators from those states are now Republican. But the GOP's increasing reliance on Southern-style social conservatism, and its accompanying abandonment of any libertarian pretenses, has led some Democratic strategists to see that region as fertile ground for substantial Democratic gains.

The Cato Institute, a libertarian think tank, ignited a controversy earlier this year when it invited the founder of the liberal blog Daily Kos, Markos Moulitsas, to enter into a dialogue concerning a liberal-libertarian alliance. Cato has become increasingly disenchanted with a Republican Party that it has come to view as hostile to libertarian beliefs, while Moulitsas has made Democratic gains in the Mountain West something of a personal crusade.

Moulitsas, for example, routinely touts Democratic Gov. Brian Schweitzer of Montana as a national figure to be emulated. Moulitsas was also one of the earliest and more fervent supporters of Jon Tester's Senate campaign in the same state, a campaign that succeeded despite, or because of, Tester's overt call for repeal of the Patriot Act on the grounds that it permitted unwarranted privacy invasions by the government.

In an article written for Cato, Moulitsas described the "excitement at the growing ranks of Western Democrats who aren't just transforming the politics of the Mountain states, but will hopefully lead to the reformation of the Democratic Party and a new embrace of the politics of personal liberty." Citing the Schiavo controversy, stem-cell disputes and general sexual moralizing, he attributed growing libertarian discomfort with Republicans to the fact that "we are seeing a government aggressively seeking to meddle in people's bedrooms, doctor's offices, and churches." In a follow-up article, Moulitsas argued for the "formulation for a new breed of Democrat that is finding success in the Mountain West."

Given the region's deep-red Republican history, there is understandable skepticism about just how Democratic the interior West might be. But last week's election results demonstrate that the GOP faces a towering problem nationally. The activist social conservative agenda demanded by its Southern evangelical base is precisely what alienates voters in the rest of the country, particularly those with an aversion to federal government intervention in their lives. Such opposition to expansive government intrusion into people's lives was once the very source of Republican support in the Mountain West.

During the 1990s, the Waco and Ruby Ridge controversies, along with disputes over federal government control of public land, became symbols of pro-Republican, libertarian sentiments throughout that region. The ethos of that time was captured by Newt Gingrich's declaration on "Meet the Press" that "Westerners have a 'genuine fear' of the federal government that Easterners and city dwellers should try to understand." And Rep. Helen Chenoweth, R-Idaho, said that citizens "have a reason to be afraid of their government."

But Republican opposition to expansive government power seemed to disappear as soon as Republicans consolidated their control over the federal government. As a daunting symbol of excessive federal power, Janet Reno's Waco and Ruby Ridge assaults have been replaced by an emergency congressional session to control Terry Schiavo's end-of-life decisions, as well by a seemingly endless array of Republican efforts to regulate the private and intimate lives of Americans.

In this regard, the outcome of the 2006 midterm elections is a cause for real alarm among Republicans. In a Weekly Standard article this week titled "Pathetic Republicans," the Hoover Institution's Tod Linberg warns that "the de-Republicanization of these regions [the two coasts and upper Midwest] is about complete, and the problem has spread to the high plains, the Midwest, and the non-coastal West." Lindberg attributes this problem to the GOP's excessive commitment "to largely symbolic politics of the social issues, conservative identity politics, and the culture wars," issues that are "overwhelmingly popular in the South" but not anywhere else.

All of these trends give Democrats more ammunition with which to turn the GOP into a regional party, the party of the South. University of Maryland, Baltimore County, professor Thomas F. Schaller argues in his new book, "Whistling Past Dixie: How Democrats Can Do Without the South" that "Democrats should forget about recapturing the South in the near term and begin building a national majority that ends, not begins, with restoring their lost southern glory."

As Schaller pointed out in Salon Tuesday, "the South is the most religious and evangelized region of the country, making it the most fertile ground for a socially conservative message." Schaller contends in "Whistling Past Dixie" that the majority political and cultural views in the South are so distinct from the rest of the country that "the Democrats' near-term goal should be to isolate the Republicans as a regional party that owns most of the South, but little else."

No political party can be everything to everyone. As Republicans are forced to rely more and more on their base of white Southern evangelicals, they will be increasingly viewed as the party of intrusive governmental control.

In the process, the Democrats have the chance to become the party that stands for the right of adults to make decisions about their own lives free of moralistic governmental interference and regulation. Those who cast their votes based principally on such libertarian sentiments -- driven by the belief that the government should, to the greatest extent possible, stay out of their lives -- will view the Democratic Party as the far more attractive choice. The decreased support for same-sex marriage bans in the West, as well as the 2006 midterm results generally, make clear just what a potent opportunity this is for Democrats.