Yes, Democrats do need the South!

Tom Schaller may think the Democrats can whistle past Dixie and still win, but that's a recipe for disaster. 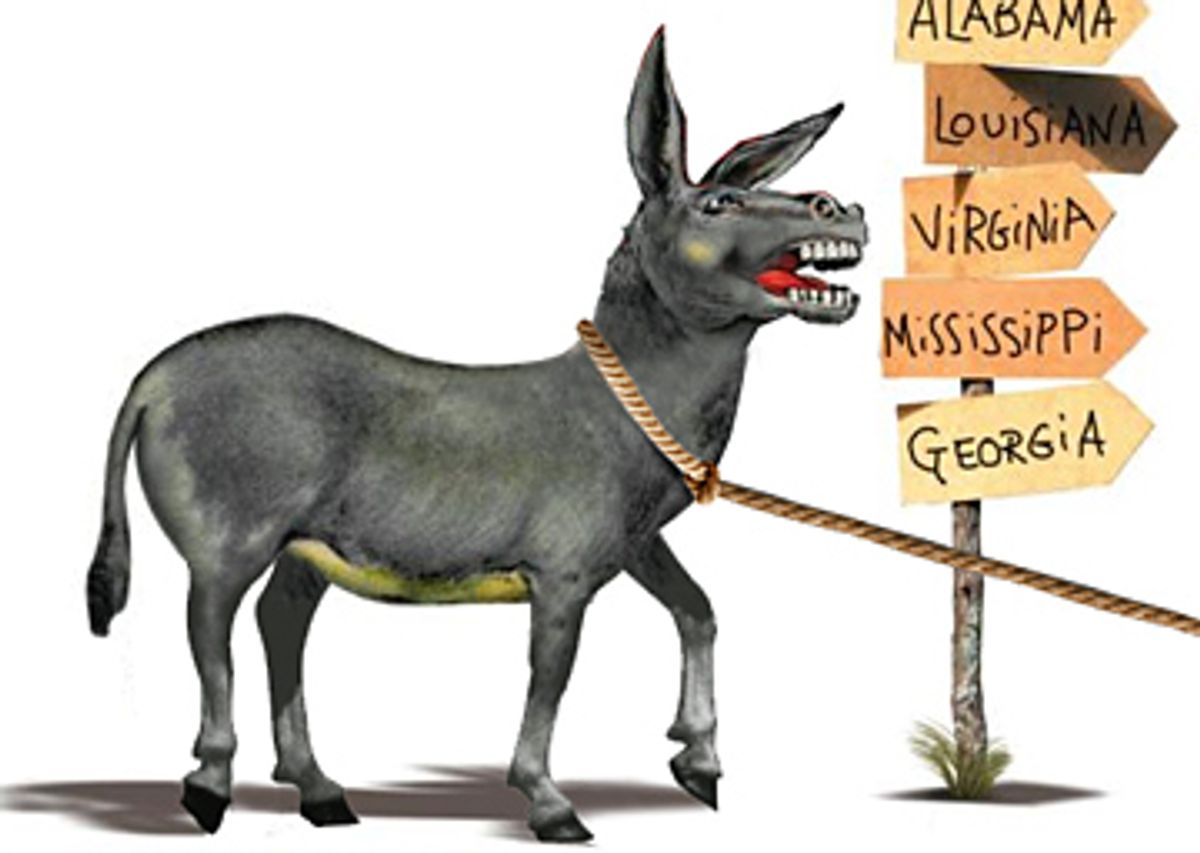 You have to hand it to Tom Schaller. The moment the midterm election results were more or less in, he crunched some numbers and stared at the exit polls, and took to the cyber-pages of Salon to trumpet the results as a confirmation of his idée fixe. As explained most thoroughly in his new book, "Whistling Past Dixie," and in many fewer words in his recent Salon article, "Do Democrats Need the South?" Schaller is a Captain Ahab whose Great White Whale is to persuade Democrats not only to write off the South for the foreseeable future but to campaign consciously against the benighted region in order to consolidate a non-Southern majority.

Salon invited me to respond, presumably as the most conspicuous Cracker Democrat close at hand. And I must begin by noting that Schaller's generally well-constructed case, here and in other venues, is consistently flawed by an overstatement of opposing views. Aside from the occasional Mudcat Saunders, I don't know any Democrats, Southern or otherwise, who think that the South is going to be a majority-Democratic region at the presidential level anytime soon, or that Democrats should obsess about the South at the expense of other opportunities. But there's a whole lot of ground between this alleged Southern strategy and Schaller's run-against-the-South prescription, and that's where I'll take my stand.

With that stipulation, let's look at the 2006 numbers. Since Democrats did in fact gain ground in the South and did not lose a thing, Schaller is at pains to show how meager those gains were in comparison with the gains in other regions. But he largely ignores the constraints of the Southern political landscape this year. In a quirk of the electoral calendar, only five Senate seats were up in the South (accepting Schaller's definition of "the South" as the 11 states of the old Confederacy), four held by Republicans. Democrats won two, for a net gain of one senator, which is a perfectly proportional contribution to the conquest of the Senate. Similarly, there were six gubernatorial contests in the South, five in seats held by Republicans. Democrats won two for a net gain of one, again a proportional contribution to the national results. (Democrats also won the single Southern governor's races held in 2004 and in 2005, which means they now control five of the 11 executive offices.)

There's no question Democrats underperformed in Southern House races, picking up five net seats (with a sixth and a seventh possible in disputed races in North Carolina and Florida). But it should be remembered that nearly half the region's House seats are in three super-gerrymandered states, Texas, Florida and Georgia. Schaller emphasizes two near losses by Democratic incumbents in my home state of Georgia. But in fairness, he should acknowledge that both of these districts were re-gerrymandered by the Republican Legislature last year, making Jim Marshall's district (the 8th) significantly more Republican, and taking John Barrow's home base out of his district (the 12th) entirely. The close Georgia outcomes also owed a lot to the decision of the national GOP to make Marshall and Barrow two of the three incumbents they spent heavily to defeat, in the end falling short.

As for state legislators, Schaller sniffs that Democrats picked up a small percentage of their national gains in seats in the South, and didn't win control of any new chambers. But the national seat-gain number is distorted by big Democratic pickups in the mammoth New Hampshire House, and Democrats were already stronger in Southern legislatures than in many other parts of the country. As of today, each party controls five Southern state legislatures, with one split (Tennessee). Not too shabby.

However you slice and dice it, these 2006 results just aren't consistent with Schaller's broader argument that Democrats should actively distance themselves from the region and its voters as a permanently lost cause, and make Dixie-phobia a talking point in appeals to other regions, especially the interior West, which he appears to consider the Promised Land. I'm happy about recent Democratic gains in the West, too, but I wouldn't get too carried away with this Rocky Mountain high, given the interior West's relatively small size and the generally dismal record of Democratic presidential candidates there since 1964.

Part of the problem with Schaller's approach is that he dismisses contrary evidence as irrelevant to the irrefutable case for the solid Republican South. In his Salon piece, he says: "Over four decades, in fits and starts, the Republicans captured the South." Well, one man's "fits and starts" is another's "cycles and countercycles." At the risk of dating myself, I can say that I've been hearing that the South was on the verge of becoming a one-party Republican "base" region quite literally since 1964. But every time that Republican "great gettin' up morning" has been about to dawn, one of those "fits and starts" has occurred -- in 1970, 1974, 1986 and 1998 at the sub-presidential level, and in 1976, 1992 and 1996 at the presidential level. Sure, the overall trend has been toward the GOP, but that's hard to avoid, since the starting point was a one-party Democratic region.

Schaller is absolutely right, of course, that Democrats can put together a presidential or House majority without much of anything in the South. The eight large states in the North, West and Midwest that Democratic candidates have carried in each of the last four presidential contests put the party well past the halfway point to the 270 electoral votes needed to win the White House. But those states have actually suffered a net loss of six electoral votes -- and six House seats -- in the past decade, and are likely to lose a few more after the 2010 census. And so long as we have a federalist system and care about control of state governments, and have a Senate in which every state has two seats, conceding small states to the GOP, whether in the South, the Plains or the interior West, will place a huge anchor around the donkey's neck.

Although he doesn't go into it much in the Salon piece, Schaller's biggest concern is that any effort to appeal to the South is inconsistent with progressive politics, primarily because he considers Southern culture deeply and inherently reactionary. And that's why he thinks it makes sense to become an explicitly anti-Southern party, battening on an alleged hostility to Southern folkways in the rest of the country, much as Republicans have demonized Massachusetts and Northern California. In "Whistling Past Dixie," after 236 pages of relatively dispassionate prose, Schaller finally cuts loose with this paragraph of anti-Southern bile:


When Democrats give the president authority to start a preemptive war in Iraq, they acceded to southern bellicosity. When Democrats go soft on defending social policies, they lend credence to the southernized, "starve the beast" mentality of governance. When Democrats scramble around to declare that they, too, have moral values, they kneel in the pews of southern evangelism. This absurdist catering to the worst fitting, least supportive component of the Democratic coalition must cease.

Here as elsewhere, Schaller seems to be channeling the Dixie-obsessed, Texas-born polymath Michael Lind, who has spent much of the last decade or so deploring the invidious influence of the Southern Scotch-Irish, whose bigoted, Bible-thumping and militaristic habits are ruining the nation. The hatred of all things Southern isn't much more attractive dressed up in regression analysis and charts.

Schaller's assumption that successful Southern Democrats have to run on platforms more irreconcilable with progressive values than their counterparts in the interior West is dubious indeed. But the idea that Democrats will do well by attacking Southern culture is just plain dangerous.

For one thing, no one can deny the Southern cultural flavor of many areas outside Schaller's definition of the South, most obviously border states such as Missouri, Kentucky, West Virginia, Maryland and Delaware, but also portions of Ohio, Indiana and Illinois. And anyone who thinks most of the nation despises Southern culture hasn't paid much attention to the rapid spread of enthusiasm for NASCAR and country music, not to mention evangelical Protestantism and megachurches. Let's also remember the pervasively Southern character of African-American culture throughout the country. It's no accident that Southern Democratic politicians who run nationally seem to do especially well in presidential primaries among African-American voters.

This last observation leads me to a fundamental reason Democrats would be foolish to write off the South entirely, much less spurn its voters as contemptible yahoos. The demographic composition of the South, with rapidly rising Hispanic populations in some states supplementing a sizable and loyal African-American base, means that there is a floor to Democratic losses in the region. It also explains residual Democratic strength at the state level, and creates potential opportunities for future gains. Schaller is right that racial polarization characterizes the politics of states like Mississippi, Alabama and South Carolina, but that has been true for decades, and it's not at all evident the phenomenon is becoming universal.

In the end, I'm with Howard Dean: In this closely divided national electorate in which red states still outnumber blue states, Democrats should pursue a 50-state strategy with a common progressive message, tolerating some regional differences, and let individual candidates, especially those running for president, target their resources and appeals as opportunities dictate. If that means writing off the South in 2008, fine by me. But please don't prejudge the map based on unreasonable prejudices toward one region, even if it's the one populated by us crazy Crackers.