We blundered into Iraq for made-in-America reasons. Now our absorption in domestic politics will dictate our blundering out. 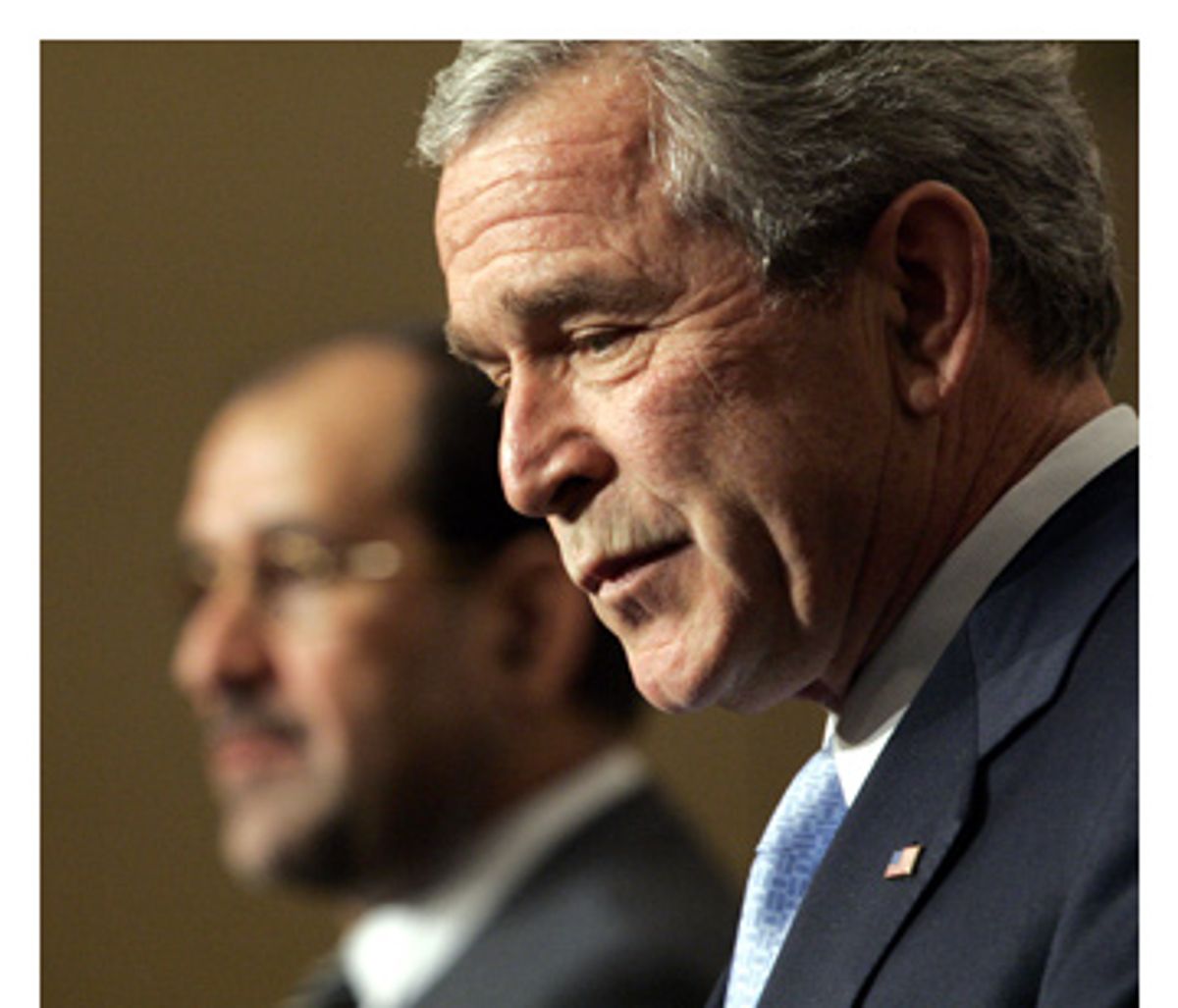 What makes anyone believe that America would be any more adept at getting out of Iraq than the world's only stupor-power was at getting in?

Since the election and the unceremonious end to Donald Rumsfeld's four-decade career in public service, Washington has been enraptured with a childlike rescue fantasy in which James Baker swoops down from on high to save George W. Bush from Iraqi infamy. The 10-member bipartisan Baker Commission, blessed by Condi Rice and seemingly by the current president's father, was hailed as the perfect vehicle to bring about an eventual face-saving American withdrawal from an unwinnable civil war.

That, at least, was the fantasy until the New York Times came up with a leaked summary of the conclusions of the Iraq Study Group. The report -- slated for big-screen release with a celebratory press conference next Wednesday -- appears to be riddled with the standard papered-over vagueness of a split-the-difference committee-written document.

The Baker Commission will reportedly advocate the beginning of troop withdrawals but leave unclear what the pace of such a pullback should be and whether combat brigades would merely be redeployed to safer bases inside Iraq. According to the Times, the study group is fixated on Washington's favorite fig leaf, a diplomatic effort designed to obscure the weakness of the American position by reaching out to Iran and Syria.

It is easy to guess why the commission has apparently confused blandness with boldness: an irresistible temptation to tiptoe through the tulips in trying to sway the dead-enders in the White House. Baker and his Democratic co-chairman Lee Hamilton clearly believed that a 10-0 consensus -- even with blurry language -- was more potent than a sharply worded, but divided, committee report.

Still, many in Washington believe that the imprimatur of Baker and Company alone will work miracles. "It's the preface to the final stage," said a prominent Republican who has served in prior administrations. "It sends the message that Republicans are pretty frustrated on the ground in Iraq and pretty frustrated on the ground at 1600 Pennsylvania Avenue. It makes the White House know that 'stay the course' at any level is not a winning solution."

In theory, after the week he has had, Bush should not need any more convincing. The leak of national security advisor Stephen Hadley's recent memo belittling Iraqi Prime Minister Nouri al-Maliki provided a vivid illustration that key figures at the upper levels of the Bush administration are now playing their own game on Iraq. Then Maliki employed the only weapon in the arsenal of a sock-puppet foreign leader -- the public sulk, as he boycotted Wednesday night's dinner with Bush and Jordanian King Abdullah II.

Even so, there were initial signs that the Baker commission report may not rival the works of Camus for an honored place on the presidential reading list. Bush, at his Thursday press conference in Jordan with a still petulant Maliki, memorably commented that "this business about graceful exit just simply has no realism to it all."

Hard though it may be to type these words, Bush is right. Barring the kind of light-up-the-sky miracle that inspires the creation of a major new religion, there will be nothing graceful about the route home from the rout in Iraq. No regional conference nor redeployment strategy is likely to be any more effective than Hadley's dreams of transforming Maliki into a competent leader. (There was something inherently comic about a Bush administration memo complaining that a foreign leader is the captive of "a small circle" of advisors who are "coloring his actions and his interpretations of reality.")

Like so much else, the route out of Iraq will be dictated not by American self-interest (how to preserve our influence and prestige) or moralism (how to lessen the suffering of the Iraqi people), but domestic politics. The expectation is that Bush has to disengage from Iraq over the next year or so to prevent the Republican Party from suffering a 2008 political defeat so severe that it will make the recent congressional elections look like "morning in America" by comparison. It is telling that this week Newt Gingrich -- the smartest strategist and the most maladroit practitioner in the Republican Party -- called the Iraq war a "failure" during a prepping-for-2008 appearance in New Hampshire.

"The pressure that Bush will get from the Republicans will be withering," said Jeremy Rosner, who served on the National Security Council staff in the Clinton White House and is now a partner in the polling firm of Greenberg Quinlan Rosner. "It's hard to see how the war will be politically sustainable for him. And if that's the case, it's hard to see how it will be remembered or perceived as another Vietnam caused by the Democrats."

Dovish congressional Democrats will be the short-term beneficiaries of the Iraq Study Group, since they will get all the political protection they need merely by reciting as their mantra, "Adopt the recommendations of the Baker-Hamilton Commission." No one in the Democratic leadership is even considering tinkering with funding for the Iraq war or adding any conditions on military appropriations bills. This do-nothing posture is probably politically wise (no one wants to be blamed for not supporting the men and women in uniform) and also a realistic assessment (based on the Vietnam War) of the practical limitations of Congress' power to shape military strategy.

Iraq was Bush's war of choice, and the return from Iraq will be Bush's retreat of choice.

But getting out will not be easy. At first, the Baker Commission report is likely to prompt the kind of policy debate at which Washington excels -- a protracted and politically loaded discussion of the meaning of common English words and phrases. (A prime illustration: the current high-decibel semantic struggle over whether the Iraqi conflict is a "civil war.") Everyone in politics from Jack Murtha to Tony Snow will brandish idiosyncratic personal definitions of "redeployment" and "timetable." Even the word "negotiate" as it applies to Iran and Syria will be up for negotiation. But eventually Bush will bow to the inevitability of defeat, though his spinmeisters will, of course, be careful to call it victory.

The tragedy of Iraq is that the American invasion was launched for made-in-America reasons based on an American political timetable, heedless of the history of Iraq or the lives of its people. Sadly, the same it's-only-about-America self-absorption will probably dictate the timing and nature of the decision to give up and come home.