A vote for more cooked intelligence? 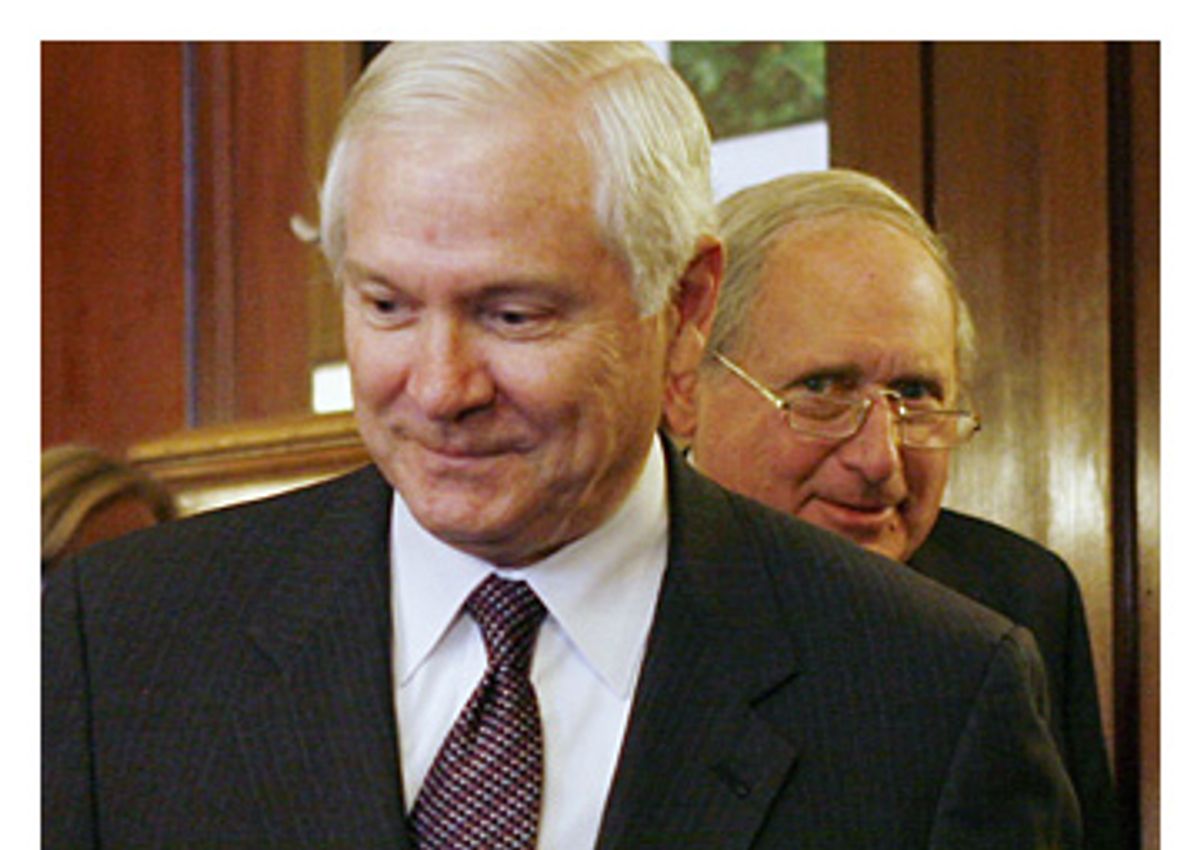 Robert Gates won't be forced to run much of a gauntlet Tuesday during his Senate confirmation hearing on the way to becoming the next secretary of defense. The former CIA director has bipartisan support. And during his interrogation, Washington's near-total preoccupation with the situation in Iraq will crowd out any serious probing of Gates' past, including his murky role in the Iran-Contra scandal and the cooking of intelligence on the Soviet Union during Gates' tenure at the CIA more than a decade ago.

Lawmakers from both parties seem to agree that Gates' speedy accession is owed to a key qualification -- that Gates is not Donald Rumsfeld. When he announced his support for Gates recently, incoming Senate Majority Leader Harry Reid said that fact is "the one thing he has going for him."

But in the rush to discharge Rumsfeld, the Senate may not fully explore a blemish in Gates' dossier that seems particularly relevant now. A close examination of Gates' record, including little-known documents obtained by Salon from the National Security Archive, shows that as Gates was rising through the echelons of the CIA in the late 1980s to be CIA director in 1991, he was involved in the trafficking of intelligence reports that relied on compromised sources to show an exaggerated foreign threat. With the U.S. struggling for an exit strategy from Iraq and eyeing adversaries like Iran, President Bush has selected a man to head the Pentagon who was once in charge during an intelligence fiasco not unlike the one that unleashed the Iraq war.

In September 1995, CIA Inspector General Frederick Hitz recommended that Gates be held accountable for his role in hyperbolic intelligence reporting on the danger posed by the Soviet Union. In those reports, the CIA relied on sources the agency knew or should have known had been under Moscow's influence, Hitz found. At that time, though, a robust Soviet threat was music to the ears of some hard-liners in Washington, and the trumped-up intelligence made it into the hands of the president and Pentagon leaders.

When confronted with Hitz's findings in 1995, Gates, who had since left the agency, deflected responsibility by pointing to his former employees' errors. In an Oct. 30, 1995, letter from Gates to then-CIA director John Deutch, Gates responded to the findings by blasting subordinates, while conceding that the flawed reports were "a serious breach of the integrity of the intelligence process." In that letter, Gates expressed his "unhappiness" with lower-level CIA officials who, in Gates' view, failed to "characterize accurately these source problems both to the CIA senior officials and to those in the policy agencies who received the intelligence reports." The letter was cosigned by two other former CIA directors also fingered by the inspector general: William Webster and James Woolsey. Deutch, who now supports Gates for secretary of defense, ultimately sided with Gates over the inspector general.

The CIA has never released the 1995 inspector general report. But in an interview, Hitz said that Gates should have been held accountable, because he was in charge. "The top guys at that period of time, in my opinion, were not held accountable for what happened on their watch," said Hitz, now a lecturer at the University of Virginia law school. "My theory is that if you are going to make sure everyone operates with integrity, you have to hold the heads of the organization responsible," he explained. "We can't have reports going forward to the president of the United States that were being fed to us by our chief enemy."

Hitz's 1995 report was one component of an ongoing assessment of the sprawling damage caused by Aldrich Ames, the veteran CIA officer who spied for the Russians and who was exposed in 1994. The faulty intelligence that passed through on Gates' watch guided government decisions on how to spend billions of dollars on weapons systems.

Hitz clarified that the dubious intelligence gathering happened below Gates, at lower levels of the CIA, and he says he does not believe that Gates personally knew about the problem. "This was not something the management of the CIA was knowingly passing on to the president," Hitz said. But at the same time, he added, "Nobody, from the reporting officials up the line, was sufficiently vigilant to question where these reports were coming from."

Eight years before the CIA inspector general came down on him, Gates had given a speech on the politicization of intelligence in which he noted drawbacks to keeping Congress fully informed on intelligence matters. In a Sept. 29, 1987, speech at Princeton University, Gates said that the balance of power in Washington tipped toward Congress, in part, "when Congress obtained access to intelligence information in the mid-1970s essentially equal to that of the executive branch." He added that, "This situation adds extraordinary stress to the relationship between CIA and policy agencies." Gates explained that "not a few members of Congress are willing to exploit this situation by their own selective use of intelligence that supports their views."

Gates also portrayed as naive the notion that intelligence can somehow float above the political fray. Intelligence officers, he said in the speech, sometimes feel a "strong impulse" to push back against policies they dislike. Policymakers, on the other hand, sometimes "try to influence the analysis to come up to conclusions they want," Gates admitted. "They even intimidate," he said.

Gates is expected to face some questions Tuesday on the politicization of intelligence from the Senate Armed Services Committee, though his confirmation appears to be a fait accompli.

Winslow Wheeler, director of the Straus Military Reform Project at the Center for Defense Information, a national security think tank, says Congress will be letting Gates off the hook. "If they were taking the job seriously, they would get to the bottom of that," Wheeler said, referring to Gates' alleged role in flawed intelligence reporting in the past. It is important to investigate now, he said, because "that is how we got into this [Iraq] mess in the first place."

Democratic Sen. Jack Reed of Rhode Island, a committee member, said in an interview that questions about Gates' record will likely focus around Iraq. "I think the question is, 'You've seen the run-up to the war in Iraq and you've seen how intelligence was used. Do you think that was good or bad?'" Reed said. Gates, he said, will then probably reply to the panel, "I would never do that.'"

At a press conference last week, Reed told reporters that he doesn't see "any significant obstacles" to Gates' confirmation -- again, mostly because Gates is not Rumsfeld. "He comes in with a different attitude and I think it is important to have a different attitude," Reed explained. "I think he comes in with a temperament and demeanor that is going to encourage cooperation, collaboration and mutual respect between the uniformed services and himself."

Democrats' backing of Gates is a departure from their position on him in earlier years. After President Ronald Reagan nominated Gates to be CIA director in 1987, Gates withdrew his name when he came under fire in the Senate for his role in the Iran-Contra affair.

President Bush nominated Gates again to that post in 1991. A New York Times editorial on Nov. 4, 1991, urged against confirming Gates: "Charges that Mr. Gates slanted intelligence assessments, leaving Congress in the dark and more amenable to administration policy, stand unrefuted," the paper wrote. In the end, 31 Democrats voted against Gates, including 12 who remain in the Senate today.

One of those Democrats, Carl Levin of Michigan, is now set to head the Senate Armed Services Committee in the next Congress. Levin told reporters at a press conference last month that he would "take a fresh look at Mr. Gates," but he also warned, "We had enough manipulating intelligence -- shaping intelligence in order to give the policymakers what they wanted to hear." Levin said he was concerned by former Secretary of State George Shultz's 1993 memoir "Turmoil and Triumph," which portrayed Gates as part of that problem.

Shultz said in that book that intelligence from the CIA had become highly politicized when Gates was there. "I don't have any confidence in the intelligence community," Shultz said he told Gates in a Jan. 5, 1987, telephone conversation, when Gates was acting director of the CIA. "I feel you all have very strong policy views," Shultz remembered saying. "I feel you try to manipulate me. So you have a very dissatisfied customer. If this were a business, I'd find myself another supplier."

According to Shultz, Gates responded by explaining how the CIA has taken great pains to ensure that intelligence reporting would not contain any particular bias. Nevertheless, Shultz wrote, "I felt that Gates was giving me an idealized picture of what was an altogether different reality."