According to Andrew Blechman, those red-legged head-bobbers are actually a whole lot faster, kinder and smarter than we give them credit for. 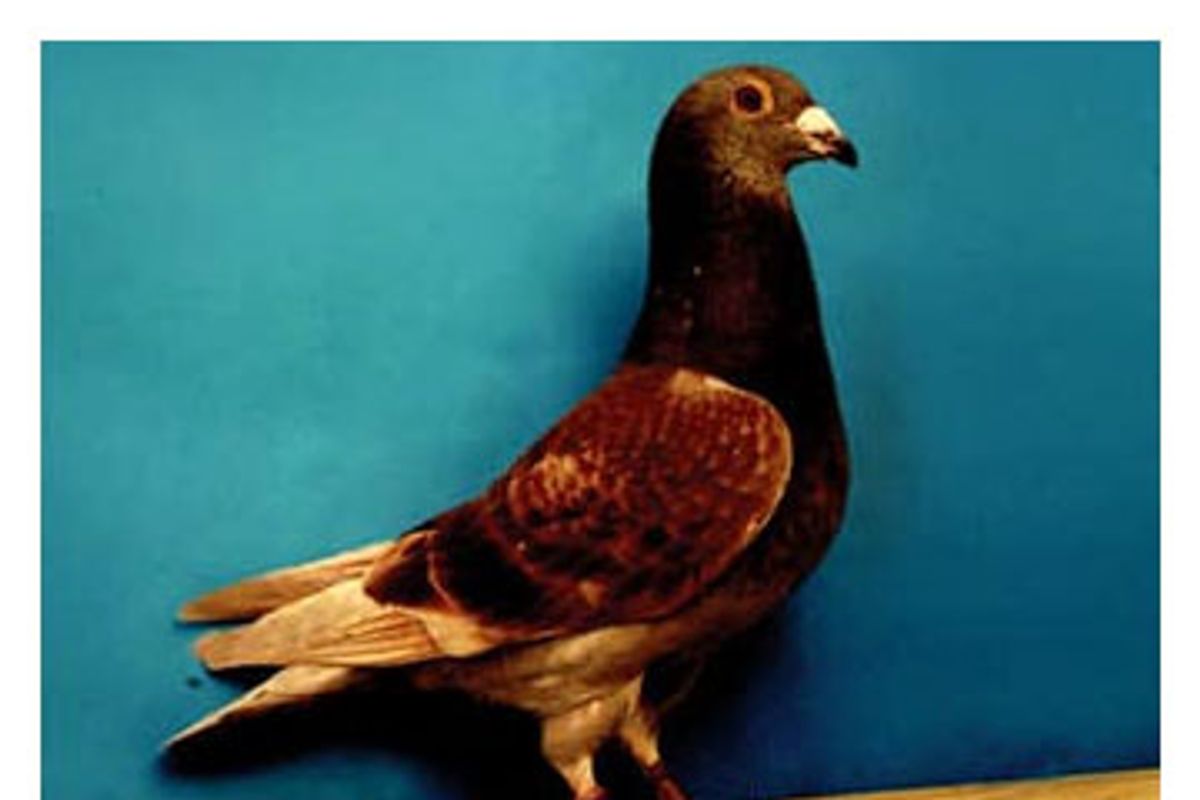 A little experiment: What comes to mind when you hear the word "dove"?

Intimations of peace? The promise of hope after long hardship, à la Noah releasing a snow-white bird to gauge the waters of the flood? A kick-ass ice cream bar? Whatever the image, the association is likely positive. Beatific, even.

If you're like most people -- and especially if you're like most city dwellers -- you probably get a bit skeeved out just hearing the word. Pigeons? They might not be vermin -- not exactly -- but they aren't too far up the ladder, either. They eat trash. They crap everywhere. Stupid. Filthy. Rats with wings. Right? Sorry, but not quite. In fact, not even close. And thanks to Andrew Blechman's consistently engaging and surprising new book, "Pigeons," the seemingly dull, unlovely members of the Columbidae family -- or, rather, their idiosyncratic and intensely loyal human proponents -- now have a handy arsenal of lively anecdotes and plain old facts (heads up, wisenheimers: Pigeons are doves) with which to defend their long-maligned feathered friends.

Along the way, Blechman takes pains to chronicle the views of people for whom pigeons are, at best, a nuisance and, at worst, a plague. He spends a cold, taxing day in rural Pennsylvania among a community of men, women and children who enthusiastically and unapologetically shoot pigeons for sport, for food and even for charity. He chats with the owner of a South Carolina squab-processing plant for whom the birds are nothing more than meat divinely destined for ovens, frying pans and human gullets. ("All he cares about," Blechman writes, "are breasts, because that's where the meat is. 'I want nice, well-rounded ones,' he tells me. 'I want big breasts.'") And, evidently without having to search too far, Blechman finds and dutifully quotes those who, for reasons as numerous as bread crumbs in St. Mark's Square, simply despise the red-legged head-bobbers that have learned to live (and, more universally than their human counterparts, thrive) amid the chaos of modern metropolises.

But despite his fair and balanced reporting on the many detractors of, as his book's subtitle has it, "The World's Most Revered and Reviled Bird," make no mistake -- Blechman himself is a Columbidae family man. While he was, by his own admission, neither anti- nor pro-pigeon when he began the peripatetic journey traced in the book, something clearly happened during his wanderings through the variegated, far-flung worlds of pigeonistas. Yes, the author dutifully records the myriad arguments for the bird's obliteration. Sure, he eats fried pigeon, and enjoys it. Admittedly, he readies, aims and fires a shotgun at pigeons, and experiences the thrill of the hunt -- or, more exactly, the thrill of standing still and blasting away at birds released from spring-loaded traps. But almost before the reader has settled in and begun to enjoy Blechman's disarming, conversational style ("Some people like pigeons. But pigeons also piss a lot of people off"), the author's enthusiasm for his subject starts flying right off the page. One almost pictures him beating imaginary wings as he expounds on the pigeon's mind-boggling physical attributes and capabilities:

"With hollow bones containing reservoirs of oxygen, a tapered fuselage, giant breast muscles that account for one-third of its body mass, and an ability to function indefinitely without sleep, the rock dove [as many ornithologists have begun referring to the bird] is a feathered rocket built for speed and endurance. If an average up-and-down of the wing takes the bird three feet, then a racer is making roughly 900,000 of those motions during a long-distance race, while maintaining 600 heartbeats per minute -- triple its resting rate. The rock dove can reach peak velocity in seconds and maintain it for hours on end. One pigeon was recorded flying for several hours at 110 mph -- an Olympian feat by any measure."

That Blechman repeats, with only slight variations, this litany of athletic gifts throughout the book is one of the few aspects of the tale that grows old. We get it! Pigeons are incredibly fast fliers that can remain on the wing at top speed for hours on end on the avian equivalent of fumes. Is there really anything more of interest to say about the animal? What else has it got? And does the creature actually warrant writing, and reading, a whole book?

Happily, for Blechman and the reader, the answers are (in order) definitely, lots, and, with a few reservations, you bet.

Pigeons, it turns out, have lived closely with humans, in a perpetually evolving relationship -- first as a handy and docile source of protein, then as an incomparably fast means of transferring information and, finally, as a focus of sport (racing and shooting) and a pastime (show breeding) -- for perhaps 10,000 years. They've served as symbols of fertility, peace and renewal in religions from Christianity and Judaism to Greek, Babylonian and other Mediterranean and Middle Eastern cults and creeds, while practitioners of yoga have long invoked the bird's winged shape while assuming poses like the One-Legged King Pigeon.

For millennia, rock doves helped lost seafarers point their crafts toward land when lost, for even though the bird "often dwells on coastal cliffs, it has an aversion to large bodies of water and always flies inland in search of food. A bird released from a ship will quickly orient itself to land, and early sailors undoubtedly followed suit."

Of course, the bird's astonishing homing skills have been used for as long as, if not longer than, recorded history to carry messages of victory (and defeat) in war, announcements of the ascension of new kings and pharaohs to the throne, and even warnings of floods along the Nile. Underground coops discovered in Israel, dating from the time of King Solomon, held an estimated 120,000 pigeons -- at least a few of which were, presumably, used for purposes other than keeping David and Bathsheba's son and his friends readily supplied with squab.

And then there's the tale of the creation of one of the world's largest news companies. It all started when a failed German businessman named Israel Beer Josaphat hit upon the idea of tying tiny little bags stuffed with news and stock market prices beneath the wings of homing pigeons flown between Brussels and Aachen, Germany. The train between the cities took eight hours, the birds less than two. Josaphat ultimately changed his name to Julius Reuter and created a news-gathering empire founded on (or beneath) the wings of rock doves.

But as edifying as these historical tidbits might be, and as much about the rock dove as the book might appear to be, the story of "Pigeons" is, ultimately, one of how people respond to the bird. In the best sense, Blechman's book reads like a series of entertaining, eye-opening magazine pieces held together by the sinews, feathers and strong, hollow bones of the rock dove. Like so many of the surprisingly enthralling books written in recent years about one discrete, at-first-glance vapid topic -- Mark Kurlansky's "Cod," Charles Seife's "Zero: The Biography of a Dangerous Idea," and innumerable others -- "Pigeons" manages to illuminate not merely the ostensible subject of the book, but also something of the endearing, repellent, heroic and dastardly nature of that most bizarre of breeds, Homo sapiens.

Blechman has a shrewd eye and an ear nicely attuned to the peculiarities that reveal personality, and the human characters populating the pages of "Pigeons" are wonderfully and sympathetically drawn. From the friendly, unassuming pigeon breeders at the Grand Nationals competition held at a Lancaster, Pa., hotel, to the clearly obsessed trainers and owners of racing pigeons in the Bronx and rural England and beyond, to the happy, driven rescuer and champion of rock doves who lives in a squalid home in Arizona literally dripping with not-quite-calcified pigeon shit, the pro-bird folks who pop up in "Pigeons" make avid cat and dog people seem, well, tame in comparison.

"Sweetie, a pigeon the size of a small turkey, is pacing back and forth on what used to be a Formica kitchen counter," Blechman writes of a bird who makes her home with Dave Roth, the one-man rescue mission and Jerry Garcia look-alike of Phoenix, Ariz. "Roth nuzzles her. 'That's my girl. You're such a sweetie, aren't you?' He turns to face me. 'If everybody could experience this kind of a relationship with a bird, then we wouldn't have all the problems we have today with the pigeon haters. Pigeons can be funny, animated, and loyal like a dog. You'd be amazed.'"

This kitchen counter encounter, which appears at just about the exact halfway point of the book, is emblematic of much that's weird and humorous and even a little unsettling about Blechman's tale. If you're somehow still on the fence about pigeons until this point, you'll probably fall hard and fast on either side once you've spent a little time with Dave Roth. (Of eating squab, Roth opines that it's "like Jeffrey Dahmer eating your kid." Roth, it's worth noting, is a bachelor. And childless.)

Finally, as fate would have it, at pretty much the exact same time that Blechman's book was hitting bookstores, several research studies found that (wait for it) pigeons are vastly more intelligent than anyone, even most pigeon fans, have given them credit for.

"Pigeons are no slouches," said Robert G. Cook of Tufts University, coauthor of a study that found that pigeons can remember more than 1,000 individual images. Another study showed that pigeons evidently possess the ability to compare relationships -- such as sameness or difference -- rather than merely identifying distinct images or objects. Researchers claimed that the ability, previously observed and quantified only in humans and a handful of other higher mammals, is a form of analogous thinking -- primitive, but nonetheless exceedingly rare in the animal kingdom.

Rats with wings? Affectionate companions? Idiotic pests? Miraculous navigators? Tasty eats? Blechman's "Pigeons" flies in the face of conventional wisdom about a symbolically freighted bird that, if we thought about it at all, we thought we knew. Time to think again.