I thought picking out a "conflict-free" diamond engagement ring would be romantic. But I might as well have been signing a mortgage. 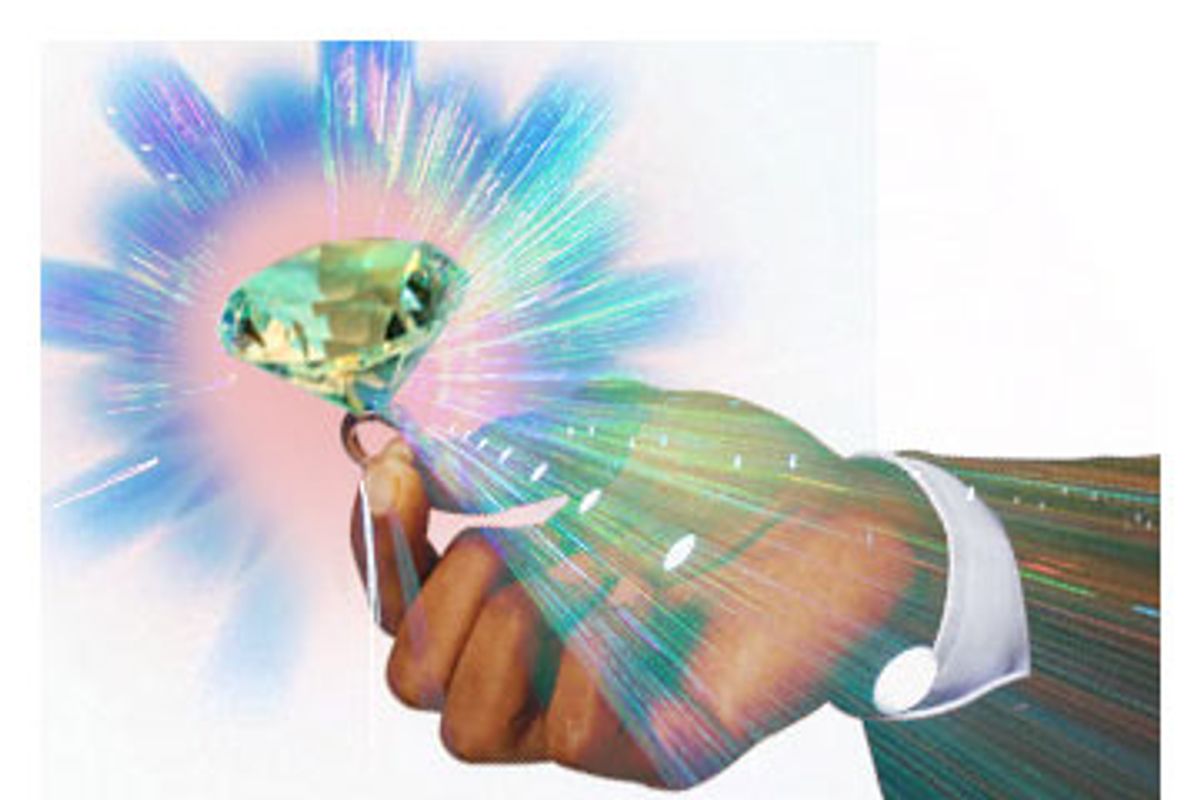 The diamond industry wants everyone who sees the new Leonardo DiCaprio movie "Blood Diamond" to know that diamonds aren't just "forever," anymore -- now they're "conflict-free." Good for them. Me, I wasn't so conflict-free when I bought one. I didn't even feel very romantic. Not by then, anyway. I walked into a jewelry store one day, with little cartoon hearts floating above of my head, and a month later, when I finally had my hand on an engagement ring, I felt like I'd been run over by a cartoon steamroller.

Don't get me wrong -- I was even more in love with my fiancie, Jenny, than I'd been before. But the process of buying a diamond is not a romantic one. I was expecting it to feel like buying flowers, only more so. Instead it felt like buying a house or a car, with all the humor and romance that only lots of paperwork, inspections and serious ethical concerns can provide.

Conflict-free diamonds are a great idea, and a worthy endeavor. Diamonds are designated "conflict-free" if they meet the requirements of the Kimberly Process Certification Scheme, created by the United Nations in 2000 to ensure that the profits from their sale aren't funding human rights abuses in Africa. The main requirement is that a KPCS Certificate, certifying that the country of origin is a signatory to the scheme, accompanies each shipment of rough diamond exports.

But you'll forgive me if I question the altruism of the diamond industry, and admire its marketing savvy. In "conflict-free diamonds," it has come up with a phrase that rivals "A diamond is forever" in its concise absolutism. The industry is promising a product that doesn't just acknowledge our doubts, but removes them. It knows that the one thing a prospective groom wants is to be conflict-free. He may or may not know much about what's going on in Sierra Leone, or how buying a diamond affects the people who live there, but it's a good bet he's feeling a little conflicted -- if not about the diamond's past then about its future.

I was feeling remarkably untroubled, though, when I floated into my local diamond purveyor's. I'd been thinking about proposing for weeks, and finally had the perfect opportunity -- Jenny and I were taking a vacation the following month, at her friend's house on Martha's Vineyard, her favorite place in the world. I figured that, travel restrictions being what they are these days, I would FedEx the ring to the Vineyard before we left, so I wouldn't have to remove it from my pocket in front of Jenny when we went through airport security. I hadn't seen the house where we were staying yet -- in fact, I'd never been to Martha's Vineyard before -- so I didn't know exactly where I wanted to propose, but I knew I didn't want it to be at the Burbank Airport.

Which is not to say that it couldn't have been. That's why I wanted to marry Jenny in the first place. We'd had a preposterously relaxed and easy time with each other right from the beginning, even though most of our friends have described each of us, to our faces, as "high-strung." Something makes us a little more low-strung when we're together. Almost conflict-free, as a matter of fact.

So I went diamond ring shopping. And after about 15 minutes, I was wondering if there was a single corner of American culture left that hasn't been infected by the desire for perfection, and the bloodless mumbo jumbo it produces. I couldn't even pretend to keep nodding as the diamond dealer droned on about "light dispersion" and "VS-1 color grade" and "girdle fringe inclusions." I felt exactly the way I do listening to nutritionists and house inspectors and computer salesmen and restaurant owners. Would Jenny feel perfectly loved only if her diamond were free of "inclusions"? Would my house stand forever if I got that copper plumbing? Would I live forever if I never ate wheat? I can't tell you how many times these days I find myself in a car dealership or a writing workshop thinking, What in hell are we so afraid of, and exactly who in hell do we think we are?

But the concept of "conflict-free" diamonds penetrated my jargon-induced stupor; it's different when the pitch is for a product that's free of ethical flaws, free of anyone else's pain, isn't it? So I took myself on a short Google tour of the history of diamonds, and the conflicts they've fueled and financed. I quickly realized that "conflict-free" was a dense little black hole of a phrase, created in a collision of good and cynical intentions, and packed with an almost infinite amount of historical suffering. And I got a familiar feeling from it, the same kind of gravity-defying feeling I can get from the countless other black holes of ambiguity that American life is full of, and that I so often encounter when I buy things -- like the aforementioned cars and houses, or even groceries. It's what conservatives like to call "liberal guilt," I guess, and I suppose that's pretty accurate, although I also like to think of it as "having a clue."

But as I read more about diamonds, I realized that having a clue hasn't ever motivated me to make significant sacrifices. Like a lot of people, I do what I can, but I only go so far. I drive a Hybrid car (but still fly on planes), I don't eat meat (but eat fish) and I was considering buying a diamond that was "conflict-free" (but was still mined by desperately poor and exploited people). Short of a Gandhi-like renunciation, there seems to be no getting completely away from the black holes of middle-class life, and, like everyone I know, I choose to resist only a few of them.

Why do we vary so little from each other when it comes to these things? And why does it feel as if the answer might have something to do with the same thing that keeps us looking for a life that's free of inclusions? I thought, Wouldn't the easiest way to give a gift that was conflict-free be to not give a diamond at all? But the truth is I barely considered that choice, probably because nobody else I know has made it. Giving diamonds as tokens of love is something people do these days. Some people. Insanely lucky, gravity-defying middle-class Westerners like me, and the people I know. I did a quick mental survey of my married women friends and realized that all of them wore diamond engagement rings. And that finding one who didn't wear a diamond would be like finding one who did wear fur. Or who smoked.

People think the fashionableness of one concern or another -- global warming, smoking, fighting African poverty -- is proof of hypocrisy on the part of the champions of those causes, but maybe it's just proof that we can only take care of one thing at a time. Or see one thing at a time. Maybe we know that trying to take it all in -- the whole bloody mess of it -- would only paralyze us, leave us numb, and so we focus on what we can. Maybe we're tired from trying to keep termites from ever coming near our houses and cancer from ever invading our bodies. Or maybe, because we spend our time wisely, on looking for love, or being in love, or falling out of it, we don't have time for much else.

I was trying to keep up an appearance of low-strungedness all morning on Proposal Day, as we sat out by the bluff at Jenny's friend's house, on beat-up old chairs, reading books and holding hands, waiting for the afternoon's predicted rain to roll in. I scurried back and forth to the house all morning, mumbling, "Hmm, gotta pee again," five or six times, hoping to eventually find a FedEx box at the front door. When I finally did, I quickly ducked into the bathroom and tore at the packaging.

I took the conflict-free diamond out of its box, and I stood there, in a stranger's bathroom on an unfamiliar old island, holding a piece of carbon even older than the island, and which, except for a tiny accident of chemical fate, could just as easily have become a person as an engagement ring, and I felt lightheaded.

Jenny was in the kitchen when I came out of the bathroom with the ring in my pocket. Her hair was wet -- I guess it had started to rain -- and she was cutting a tomato she'd brought in from the garden outside, for the soup she was making us for dinner. I watched her and swooned a little. I really love her vegetable soup -- it's made me laugh out loud with pleasure -- and watching her make it puts a wiggle in my knees. But I wanted to propose to her out on the bluff, because it's her favorite part of her favorite place in the world. So I said, "Hey, let's go back out to the bluff for a minute." (Smooth, huh?) Jenny said, "It's raining." And I said, "No, no it's not. That's just water falling from the trees." So she said, "What the hell are you talking about? It's completely raining outside." And I said, "No, no it's not," and I think that's when she knew what was going on.

When I proposed we were literally on shaky ground. We were standing on the bluff, or what's left of it, overlooking the ocean and several layers of former bluff that had surrendered to gravity and fallen to the beach below over the years, probably on days like that one. When we got out there, it was still raining lightly, and we noticed that about 30 feet away from the edge the ground was incredibly soft and loosely packed, almost moving. And that's pretty much how we felt. I was quietly hyperventilating. Jenny was blushing, and alternately grabbing at my hands and letting them go. Just as I opened my mouth, she looked over the edge of the bluff, down at the wet mountains of fallen earth, and said, "I wonder if there are any dead bodies down there."

I admit this was not the kind of speculation I was hoping for when I asked her to come outside with me. I was hoping for something a little more forward looking. But you know what? It was really romantic. She said it out of nervousness, of course, but also, I think, out of something else. After all, there were dead bodies down there. Lots of them. The earth was moving, doing its work, and we were taking our turn on top of it, me and Jenny, and the tomato and the diamond. I can't speak for the tomato or the diamond, but I think Jenny and I were feeling pretty aware of our surroundings, and pretty damn grateful. We were laughing for no reason, and then we got a little quiet and just stood there for a moment and listened to the ocean. It was cold. I took a long, slow breath, and looked down at Jenny's hands in mine. I could feel a strong, fast pulse in her fingers. Her hands were the color of nectarines. I could look at these loving hands forever, I thought.