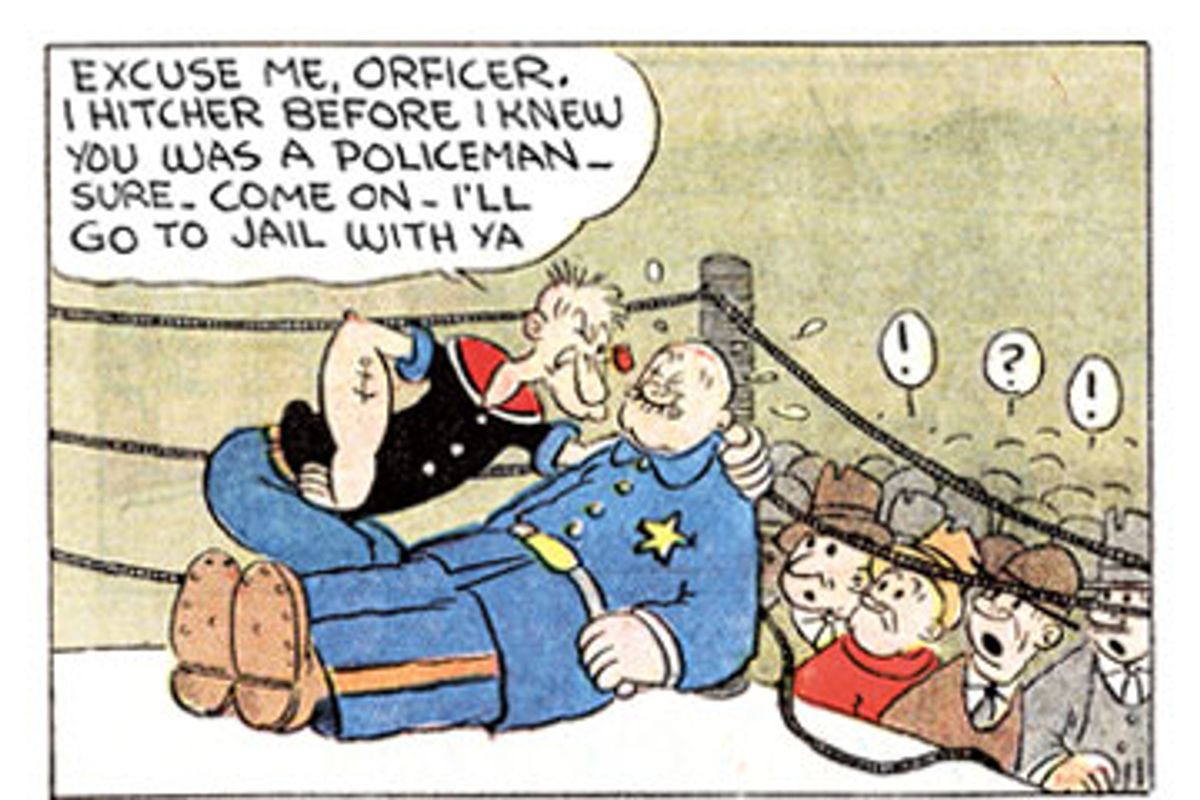 It's a very good time for aficionados of classic newspaper comics -- the great strips that have spent decades out of print, or have never been collected in the first place, are finally being reprinted in nicely designed editions. Fantagraphics' exquisite chronological volumes of Charles Schulz's "Peanuts" and George Herriman's "Krazy Kat" led the pack, but the last couple of years have also seen sharp hardcover reprints of the early years of Winsor McCay's "Little Nemo in Slumberland," Frank King's "Gasoline Alley," Hank Ketcham's "Dennis the Menace," Tove Jansson's "Moomin" and Chester Gould's "Dick Tracy." (Somebody still needs to publish definitive editions of Milton Caniff's "Terry and the Pirates" and Walt Kelly's "Pogo," though.) Now, another top-tier strip is getting the top-tier treatment, with E.C. Segar's "Popeye, Volume 1: 'I Yam What I Yam!'" The strip it reprints wasn't called "Popeye" -- at least not until decades after this material appeared. It was called "Thimble Theatre," and Elzie Crisler Segar started drawing it in late 1919, almost nine years before Popeye himself showed up. It wasn't about Popeye at first, either -- it was about the Oyl family (including Olive Oyl, of course, but also her relatives Castor Oyl, Nana Oyl, Cole Oyl and Cylinda Oyl), and Olive's hapless boyfriend, Ham Gravy. And even when the sailor man made the scene, he wasn't quite the benevolent, spinach-gobbling romantic that the later animated cartoons made him out to be: He was an independent-minded brawler whose good humor masked the effects of a life as rough as anyone on the funny pages has ever endured.

The first volume of "Popeye" (there will be six in all), which takes us up to around the end of 1930, conveniently omits most of the first decade of "Thimble Theatre." You won't miss it -- the first few pages, beginning with the daily strips from September 1928, are slightly stale slapstick, a mildly amusing bit of business involving a "Whiffle Hen" named Bernice who can't be killed no matter how hard anyone tries, and whose head can be rubbed for good luck. ("Well I'll be popeyed!" declares Castor with surprise on the story's first page.)

Then, four months later, Castor and Ham need to charter a boat and hire somebody trustworthy to sail it for them. "Hey there! Are you a sailor?" Castor asks the first person he sees. "'Ja think I'm a cowboy?" snaps a battered-looking man in sailor whites with one eye, a corncob pipe and matching anchor tattoos on his bulging forearms. "O.K. you're hired," Castor replies. Two days later the sailor has a name: Popeye. And all of a sudden "Thimble Theatre" gets much funnier.

For one thing, every time Popeye opens his mouth, he says something nutty. His dialogue is one long string of malapropisms, mangled pronunciations and wildly colorful lowlife slang, punctuated with "Blow me down!" for emphasis every chance he gets. "I'm goner lay ya among the swee'peas," he keeps telling his sparring partners. (Hence his adopted son Swee'Pea's name, which sounds a little bit less tender when you think of it that way.) But there's also a touch of sadness and even cruelty to Segar's jokes. View the early "Popeye" strips from a distance, and you notice that they're almost all about class stratification: the WASP-y, middle-class turned nouveau-riche Oyl family exploiting the determinedly lower-class Popeye, with his immigrant's tortured English and willingness to undergo incredible suffering in the hopes of catching a break. Which he never will: Bought off with a million dollars at the end of his first adventure, he wanders out of the story for a month or so (by the end of which it appears to have been made clear to Segar that he'd better get the star back onstage pronto), then turns up penniless, explaining that he was talked out of his fortune by "a dame." For which you can read that he's been playing craps down at the docks again. He's deathly afraid of "evil spiriks," and chalks up anything he doesn't understand to them. Even the familiar catchphrase that provides this volume's subtitle is a declaration of pride in ignorance. It's his response, more than once, to a string of insults: "No matter what ya calls me -- I am what I am an' tha's ALL I yam!"

There's no spinach anywhere in this first volume, and very few of the familiar "Thimble Theatre" supporting characters: no Swee'Pea, no Alice the Goon, no Jeep, barely any of the Sea Hag and, most regrettably, no J. Wellington Wimpy. And there's another curious surprise: It's nowhere near as good as Segar's later work. The strips that appear in the touring "Masters of American Comics" exhibit and "The Smithsonian Book of Newspaper Comics" are all from later in the run, when Segar developed a surer line, more uninhibited layouts, a much more keenly honed sense of both comedy and suspense. Here, though, even after a decade of "Thimble Theatre," he was still flailing a little with his stories' pacing -- a mystery involving a man who has sat motionless for 20 years gets resolved via pseudoscience explained at exhausting length -- and drawing his characters from a static middle-distance perspective, as if the strip really were a theater.

Segar also had a habit of belaboring his jokes: Popeye and Castor are suckered into investing in a "brass mine" at one point, and go around for what seems like ages getting into fights with anyone who snickers at the name. What he was already terrific at, though, was sneaking fear and poignancy into a strip that pretty much had to deliver a chuckle a day. He spends weeks building up to the first appearance of the Sea Hag, a supernatural being who sails a ship called the Black Barnacle -- Popeye is terrified of both of them, in a blindly superstitious way. And when she actually shows up, she's a silhouetted tangle of hair against a nearly black scribble of night sky, one of the scariest images that's ever shown up in a newspaper comic strip.

Every time Popeye declares his independence to defend his brawling ways, part of the joke is that we're seeing how he ended up missing an eye, hanging out on the docks and all but alone in the world: "I comes when I likes and I goes when I pleases and I don't take nothin' from nobody, no time. Blow me down!" (That line is doubly funny because Popeye, who's just knocked out some big brute with one punch, is relaxing with his hands on his hips, one ankle crossed over the other. He really, truly doesn't care.) He's cheerful in part because he's not even sure what he's missing. "No woman'll ever make a sap outta me," he declares. "I'm forty years old and they ain't never even tried it."

He's a street fighter at heart, and he's capable of taking incredible amounts of abuse. In a confrontation with the wicked Mr. Snork in late 1930, he's shot 20 times, but what he's most upset about when he goes to the hospital is that the doctors who've operated on him have left in an unlucky 13 of the bullets: "Now listen ya crazy tonsil jerkers ya either got to take another one out or put one back." Then Castor reminds Popeye that he actually has 25 bullets in him, counting a dozen from an earlier fight. "Tha's right! Blow me down I feels good now!"

By the end of the book, the daily strips are growing into the monument that "Thimble Theatre" would become. The Sunday pages, which told a separate story and are set at the back of the book, aren't showing quite as much progress. Popeye didn't show up on Sundays until more than a year after he'd debuted in the daily strip; the 1930 strips included here are crammed with plot (Segar drew as many as 22 panels in a single strip), but don't have quite as much verve. Most of them have to do with Popeye's temporary career as a boxer, derailed by his habit of punching the bejesus out of anybody who bugs him. (It's funny once -- maybe twice.) The Sunday incarnation of "Thimble Theatre" incarnation was originally accompanied, as it is in this book, by a smaller, unrelated, not especially well-remembered Segar strip called "Sappo." The one noteworthy "Sappo" sequence here takes a few potshots at modern art -- when John Sappo shows a surrealist painting to an art dealer, the dealer declares, "It's all wrong. Ask any modern artist -- the head should be at the bottom." So Sappo turns the painting upside down and sells it to the dealer for a wad of cash.

Segar didn't care about that highbrow stuff -- he was an entertainer first and an artist a distant second, at least at this stage of his career. The four-color dots on the cover of this volume, an extreme close-up of a Sunday panel's image of a boxing-glove-wearing Popeye punching out himself and his opponent simultaneously, make it look a bit like a Roy Lichtenstein painting -- pop recontextualized as fine art -- and as welcome as the book's deluxe production is, the Segar of 1930 might have found it a little odd. By the time he died of leukemia in 1938, he'd started to care much more about his art, and he'd become a better entertainer because of it. By then, of course, Popeye was a huge franchise of cartoons and merchandise, and "Thimble Theatre" finally became "Popeye" proper sometime in the '70s. Part of what's great about these early strips, though, is that they're not just about the malaprop sailor -- they're about the thimble-size world he wandered into, a world he took over by force of will and a powerful right hook. In his words, "I socks 'em permanent."