When I found out I was having a boy, I wondered: How can a feminist raise a man without becoming a hypocrite or a castrator? 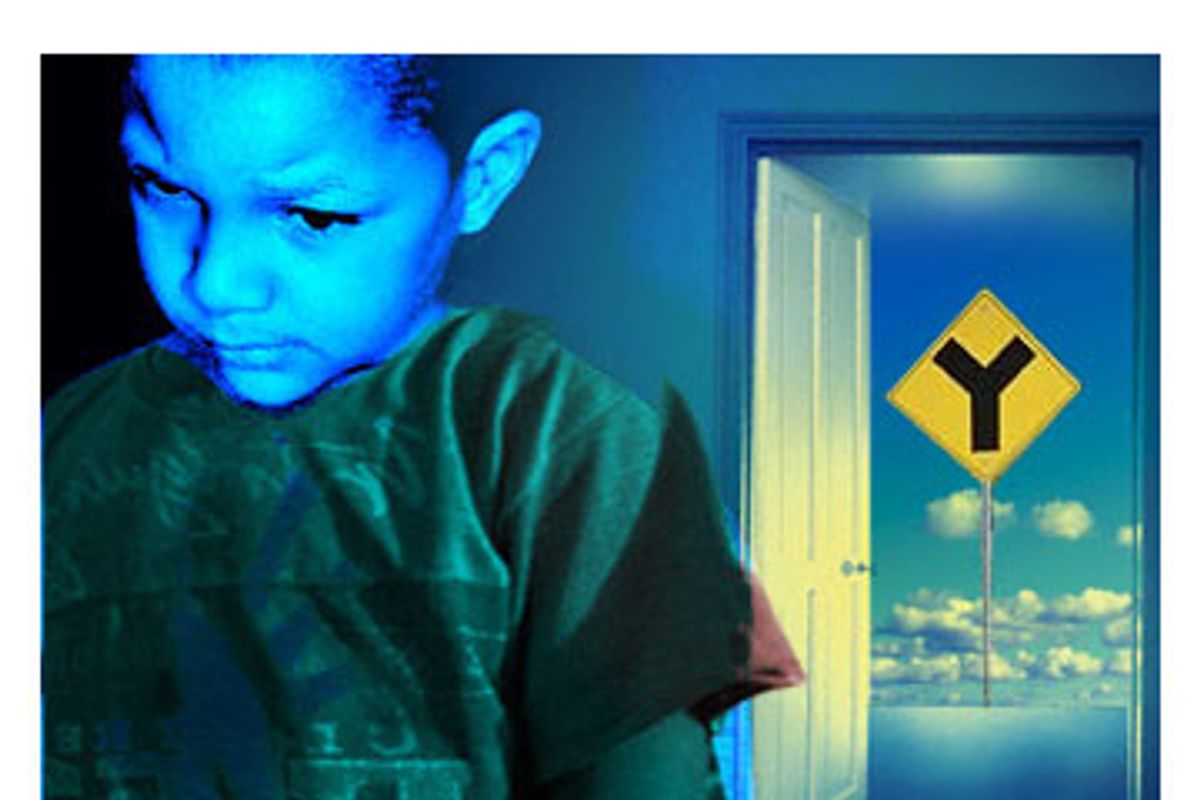 When I was pregnant with my first child, who is now 5, I was ecstatic to learn he was a boy. This was odd, since I did not much like those of the male gender. Little boys even less, because I'd seen the center-of-the-universe process by which they become men.

I might have been equally happy to learn he was a girl (as I was with my second, who is 3). I was just plain happy to know more, anything, about this mysterious new presence that was dismantling my carefully constructed life. Yet, from the beginning, I wondered how I would reconcile my feminism with raising a son. How could I do it without becoming either a castrating mother straight out of O'Neill or an ovo-hypocrite who talks woman power but raises her own precious boy to be no more enlightened, and no less entitled, than any Promise Keeper?

Black people always demand that I focus only on the holy calling of raising a black man, period. But it seems to me that if I get the manhood part right, the black part will take care of itself. If he earns my respect by becoming a moral, hardworking, courageous humanist who shoulders his responsibilities, he can be as 'incognegro' as Wayne Brady. Race schmace: His blackness is his to define. My dilemma is raising a man when he's the only one of his gender to whom I give the benefit of the doubt.

I should explain: When I say I don't like little boys, I mean that, before I had kids, all children annoyed me, albeit boys in particular because of their penchant for a mayhem that left obedient little girls ignored. When I was growing up in the inner city, children were the A-No. 1 way to ruin your life and guarantee that you'd be broke and tied to one loser or the other for the rest of your life. Once I was grown, and single till 40, children became the whining pests who kept my friends from being able to carry on a conversation for more than five minutes or who kept insisting that I exclaim over their crayon scrawls and stuttered nonsense.

While my own childhood was wonderful in some ways, it was so much grimmer than that of the privileged children I've encountered as an adult that I found myself resenting them both their freedom to be children and the unceasing stream of nurturing adult attention they received. Poor kids have to fend more for themselves emotionally; it makes us strong but it also makes us sad.

Putting the mourning of my own childhood aside, I just mean to say that children primarily meant to me that I'd always be taking care of someone, a fate too many women accept as given. When you grow up a poor black girl in a huge family you spend your life caring for the whole world. Children, I knew, meant that I'd be a human mop and short-order cook forever (see Katherine Newman's "A Different Shade of Gray" for an excellent, if depressing, look at how most inner-city grandmothers never get to retire, since they have to pick up everybody's slack). I wasn't always sure I'd escape poverty but I was damn sure I could escape parenthood.

So having children, while always a leap of faith, was especially hard for me because I knew there was a strong chance that the same fear of losing control that led me out of poverty might well keep me from surrendering myself to those walking little need-bags. Here's what I mean: for decades, I was the living embodiment of delayed gratification. I had something like a phobia of indulging myself, as people from my background understandably did with sloth, crime or drugs. The first time it ever occurred to me to lie down with a nasty cold was my first year of law school. I actually stared, appalled at what I was thinking, at the bed in my dorm room like a thief looking at an open bank teller's drawer. I was 33. That was also the year I took my first aspirin. I was afraid that if I weakened for even one moment the downhill slide might never stop.

The poor have no backup system, and I worried where such self-indulgence might lead. And what are children but the ultimate self-indulgence, the perfect monkey wrench thrown into even the most together woman's life? I knew women who kept their children at arm's length and it broke even my heart. At 41, I was less afraid of miscarriage or birth defects than of being a cold, distant mom too neurotic to surrender to her own babies. But when I found myself constantly stroking the same spot on the right side of my belly as my son grew, exulting in every blurry ultrasound of his huge head and tiny little spine, I was pitifully grateful. Thank God, my fears about not being able to love him were easily squashed.

Two kids later, I know my fears about kids being the perfect trap were justified because I have completely "mommed out." Though even before I conceived I told anyone who would listen that I was going to hire a nanny and get right back to my work and travel, now I get teary because my daughter insists on dressing herself and my son no longer accepts being called Boo Boo. ("That's not my name, Mom.") Now that he's past the androgynous baby stage my dilemma is how to be true to my feminist principles and true to my son's needs. In my community, it is often noted that black mothers raise their daughters but merely love their sons. How do I raise them both?

My unapologetic, "bite me" feminism was formed as I grew up in the fundamentalist Christian black working class, where I was supposed to be seen working and not heard questioning. I'm still pissed off about it. However much racism a black man encountered in the outside world, he always had his women folk to come home to and lord over, however benignly he might choose to do so. When my handyman, truck-driving father returned from a grueling day's work, he filled his time as he chose. I have few memories of my mother when she wasn't still in her pink waitress uniform cooking, cleaning, doing laundry or tending to one of her six kids until long past my bedtime. As soon as each girl was old enough to reach the stove, we joined her on the bucket brigade while my brother idled. I was raised to be such a rough-knuckled chambermaid, I thought the hospital corners and tongue lashings of Basic Training and Officer Training School were a respite.

When I was 16 and he was 12, my brother and I had the same curfew. My father actually punished him the few times he helped us girls, so we didn't have the heart to keep making him help. When we feminists go on about institutionalized sexism, this is what we mean; thanks, Dad, for making me complicit in my own subjugation. There's nothing lower than a black woman who keeps a dirty house or neglects her kids (except a lesbian), but a happily unemployed black man shuffling between his mama's, his big mama's and his latest girlfriend's house? It's hard out there for a brother. Spending 12 years in the military, where the black men worked just as hard to keep the women in their place as did Mr. Charlie, sealed the feminist deal.

So what to do with this son of mine? How to love him? How to raise him? How to mold him into a manly man but not a bruiser? And most of all, how not to interpret his every troubling move (e.g., refusing to wait to be called on, hitting a classmate who was uninterested in being his girlfriend, torturing his little sister) as a harbinger of a male chauvinist pig in the making?

But, adding another princess costume to my daughter's cache the other day, it occurred to me that I was a hypocrite, just not the kind I had so feared. I have no doubt that indulging (OK, creating) my daughter's Cinderella fascination is but one, far from definitive layer in her development as a woman. With something like evil satisfaction this summer, I feigned deafness when her princess regalia repeatedly got caught in her trike's wheels. When I finally came to help, I told her, "Princesses sit on thrones, honey. They can't ride bikes. So I think you'll have to choose either the ball gown or the bike." She chose the ball gown and we sat on the porch together while her brother NASCAR'd up and down on his bike. I wasn't the least bit concerned. "We got nothing but time," I thought happily as I watched her watch her brother's freedom.

So why no patience with, or confidence in, my son?

I see now that it's my anger, however justified, and not my feminism, that clouds this particular issue. There's no inherent difference between either my daughter or my son's interrupting class, hitting classmates, abusing the weak. The problem is my having read gender in, making it worse for a boy, my boy, any boy, to do those things. If I stay focused in the now and in transcendent principles -- pacifism except in self-defense or in protection of others, good citizenship, empathy, tolerance, fairness, responsibility -- I can stay focused on my kids' actual needs and not their amorphous future potential to be either victim or victimizer. My goal is to raise two feminists too smart and too honest to either accept or perpetuate gender-based unfairness. Now I have a story to tell them about how easy it is to fall into those traps.