Step inside Alison Bechdel's graphic memoir with this interview with the author and an excerpt from her book. 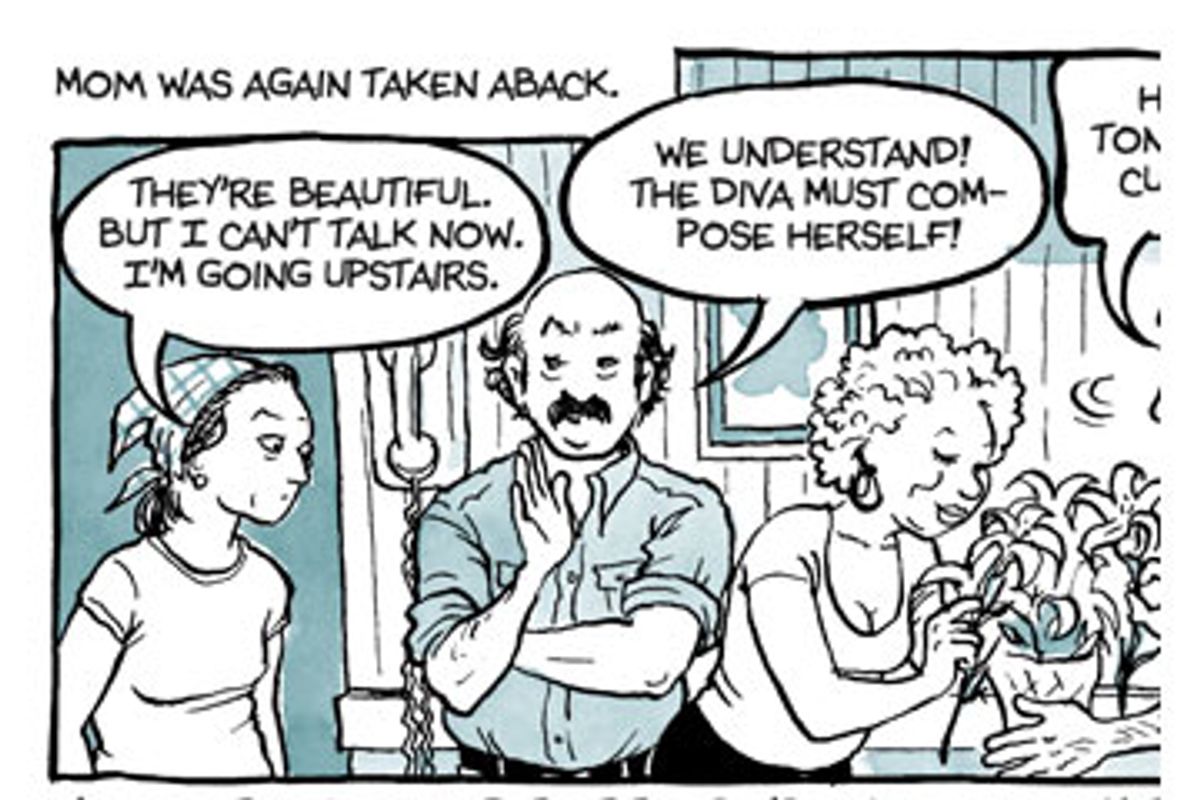 The structure of "Fun Home" is pretty unconventional -- it's about as far away from straightforward chronology as storytelling gets. How did it evolve? Or was it pretty much set from when you began to sketch it out?

Nothing was set from the beginning -- I had no idea what shape the book would take. It was entirely a process of discovery from start to finish. But it did become clear early on that a chronological structure wouldn't work because I found myself wanting to say so many different things about particular events. Eventually I settled on a thematic structure, which enabled me to replay those events through the lenses of multiple ideas.

Have any more notable facts or documents about your father's life come to light since you finished the book?

No, but I've heard from a bunch of people who knew my dad -- students, friends, family members -- that they either knew or suspected his homosexuality as well as his suicide. That surprised me. I thought I was revealing these big secrets.

In "Fun Home" as well as "Dykes to Watch Out For," you play around a lot with unexpected (and funny) conjunctions -- verbal and visual puns and coincidences. Do you specifically look for them, or are they naturally part of the way you experience the world?

I think that's a symptom of my attention surfeit disorder. Or perhaps of something worse, a grandiosity complex in which I interpret all phenomena as personally meaningful. Whichever it is, seeing these visual and verbal connections everywhere is definitely a natural part of the way I experience the world. But I cultivate them a bit too.

The images of photographs in "Fun Home" are drawn in a much more tightly rendered, "realistic" style than the rest -- but you've also talked about how almost everything in the book is drawn from extensive photo reference. What do you think of as the relationship between representation and interpretation (or "objectivity" and "subjectivity") in the way you drew the book?

I spent a lot of time thinking about the relative ontological status of these different kinds of drawings within the universe of "Fun Home" -- too much time, I worried, but somehow it seemed necessary.

I begin each chapter of "Fun Home" with a drawing of a family photograph. I wanted these drawings to be clearly legible as actual, extant photographs, so I could draw on the "objective" property of photography to ground the story in real life. I wanted to keep reminding readers that the characters are real people, the events really happened. So I copied the photos as exactly as I could, preserving their weird cropping and perspective, dimensions, borders, deckle edges. And I drew in black photo corners to reinforce the effect.

These drawings look very different than the rest of the book, which is drawn in my normal style -- on the realistic end of the spectrum for comics, but far from photographic.

At several points in the book I incorporate other drawn versions of photographs into my story. Which also contrast with my regular drawing. Snapshots of my father and me at the same age, looking identical. A publicity photo of my mom in character as Lady Bracknell. And most importantly, a photograph of the high school boy who used to baby-sit my brothers and me, sprawled on a hotel bed in his jockey shorts. This was taken by my dad, and I found it in a box of family photos. The whole book grew out of that single image, actually. Finding that glimpse of the parallel life my father had been leading right under our noses was like finding the key to a cryptogram.

I think growing up in a family where appearance and reality were at such odds has made me very attuned to questions like, What's real? And, how real is it?

One of the most striking lines in the book is "My parents are most real to me in fictional terms." Do you think of yourself in fictional terms at all? Do you imagine other people understanding their own families, or themselves, through the lens of "DTWOF" or "Fun Home"?

No, I never think of myself in fictional terms. That was just the methodology that worked best for me to explain my parents. I do keep hearing from readers who say that my family reminds me of theirs and then they proceed to describe a family that's nothing like mine. But I guess that's what stories are, lenses. If people can look through the lens of my family drama and find some meaning, that makes me very happy.