"Twilight of the Superheroes"

In this excerpt from the story "Revenge of the Dinosaurs," a character visits her aging grandmother. 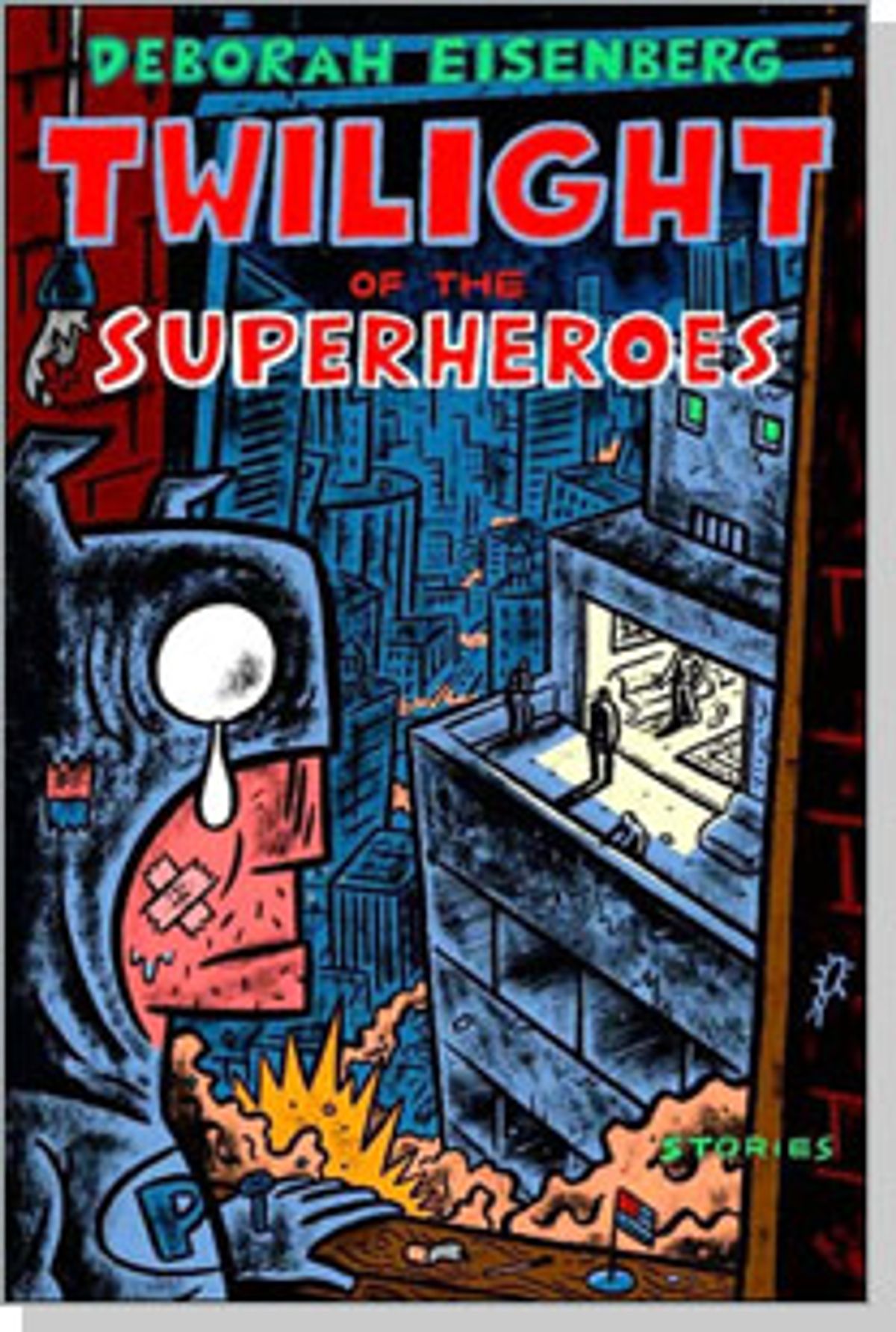 Hi, Barbara, I said. You're Barbara?

Eileen, said the nurse who answered the door. Nights.

I'm the granddaughter, I said.

I figured, Eileen said. Barbara told me you'd be showing up. So where's that handsome brother of yours?

Traffic must be bad, she said.

Traffic, traffic ... I was goggling past Eileen at Nana's apartment -- the black-and-white tile, the heavy gold-framed mirror, the enormous vases or whatever they are, the painting I'd loved so much from the time I was a child of a mysterious, leafy glade, the old silver-dust light of Nana's past. I was always shocked into sleepiness when I saw the place, as if a little mallet had bonked me on the head, sending me far away.

Or in Connecticut, Eileen said. I looked at her. Isn't that where they drive in from? she said. He's a wonderful man, your brother. So kind and thoughtful. And his wife, too. They always know just how to cheer your grandmother up. And that's one cute little girl they've got.

A while since you've seen her, Eileen commented.

I live on the other side of the country! I said.

I know that, dear, Eileen said. I've seen your picture. With the trees. Before the second stroke she liked me to sit with her and go over the pictures.

I stared. Nana? Bill had told me to prepare myself, but still -- family souvenirs with the nurse? It's supposed to mean something to be one person rather than another.

Eileen accompanied me into the living room. Nana was dozing in one of the velvet chairs. I sneezed. Soldiers were marching silently toward us across the black-and-white desert of an old television screen. An attractively standardized smiling blond woman in a suit replaced them. Does Nana watch this? I asked. She seems to like having it on, Eileen said. I keep the sound off, though. She can't really hear it, and I'd rather not. Wake up, dear, your granddaughter's here to see you. Don't be surprised if she doesn't recognize you right off, Eileen told me. Dear, it's your granddaughter.

It's Lulu, Nana, I said, loudly. Nana surveyed me, then Eileen. Neither Bill nor I had inherited those famous blue eyes that can put holes right through you, though our father had, exactly, and so had our brother, Peter. Where does all that beauty go when someone finishes with it? If something exists how can it stop existing, I mused aloud to Jeff recently. Things take their course, Jeff said (kind of irritably, frankly). Well, what does that mean, really -- things take their course? Jeff always used to be (his word) charmed that I wasn't a (his word) sucker for received (his phrase) structures of logic. Anyhow, if something exists, it exists, is what I think, but when Nana turned back to the TV she did actually look like just any sweet old lady, all shrunk into her little blanket. I bent and kissed her cheek.

She winced. It's Lulu, dear, Eileen shouted. One of Nana's hands lifted from the pale cashmere blanket across her lap in a little wave, as if there were a gnat. I'll be in the kitchen, Eileen said. Call me if you need me. I sat down near Nana on the sofa. I was not the gnat. Nana, I said, you look fabulous.

Did she hear anything at all? Well, anyhow, she'd never gone in for verbal expressions of affection. Someone sighed loudly. I looked around. The person who had sighed was me.

The last time I'd seen Nana, her hearing was perfect and she was going out all the time, looking if not still stunning, still seriously good, with the excellent clothes and hair and so on. She was older, obviously, than she had been, but that was all: older. It's too drastic to take in -- a stroke! One teensy moment, total eclipse. In my opinion, all moments ought to contain uniform amounts of change: X many moments equal strictly X much increase in age equal strictly X much change. Of course, it would be better if it were X much decrease in age.

Oh, where on earth was Bill? Though actually, I was early. Because last week when I'd called my old friend Juliette and said I was coming to the city to see Nana, she said sure I could stay at her place and naturally I assumed I'd be hanging out there a bit when I got in from the airport and we'd catch up and so on. But when I arrived, some guy, Juliette's newish boyfriend, evidently -- Wendell, I think his name might be -- whom she'd sort of mentioned on the phone, turned out to be there, too. Sure, let's just kill them, why not just kill them all, he was shouting. Juliette was peeling an orange. I'm not saying kill extra people, she said. I'm just frightened; there are a lot of crazy, angry maniacs out there who want to kill us, and I'm frightened. You're frightened, he yelled. No one else in the world is frightened? Juliette raised her eyebrows at me and shrugged. The orange smelled fantastic. I was completely dehydrated from the flight because they hardly even bring you water anymore, though when I was little it was all so fun and special, with the pretty stewardesses and trays of little wrapped things, and I was just dying to tear open Juliette's fridge and see if there was another orange in there, but Wendell, if that's what his name is, was standing right in front of it shouting, What are you saying? Are you saying we should kill everyone in the world to make sure there are no angry people left who want to hurt anyone?

So I waited a few minutes for him to finish up with what he wanted to get across and he didn't (and no one had ever gotten anything across to Juliette) and I just dropped that idea about the orange and said see you later and tossed my stuff under the kitchen table and plunged into the subway. When Juliette and I were at art school together, all her boyfriends had been a lot of fun, but that was five or six years ago.