With an e-mail list 3 million strong, the newly reformed liberal is primed for another White House run. But strategists warn against relying on the Internet to win in 2008. 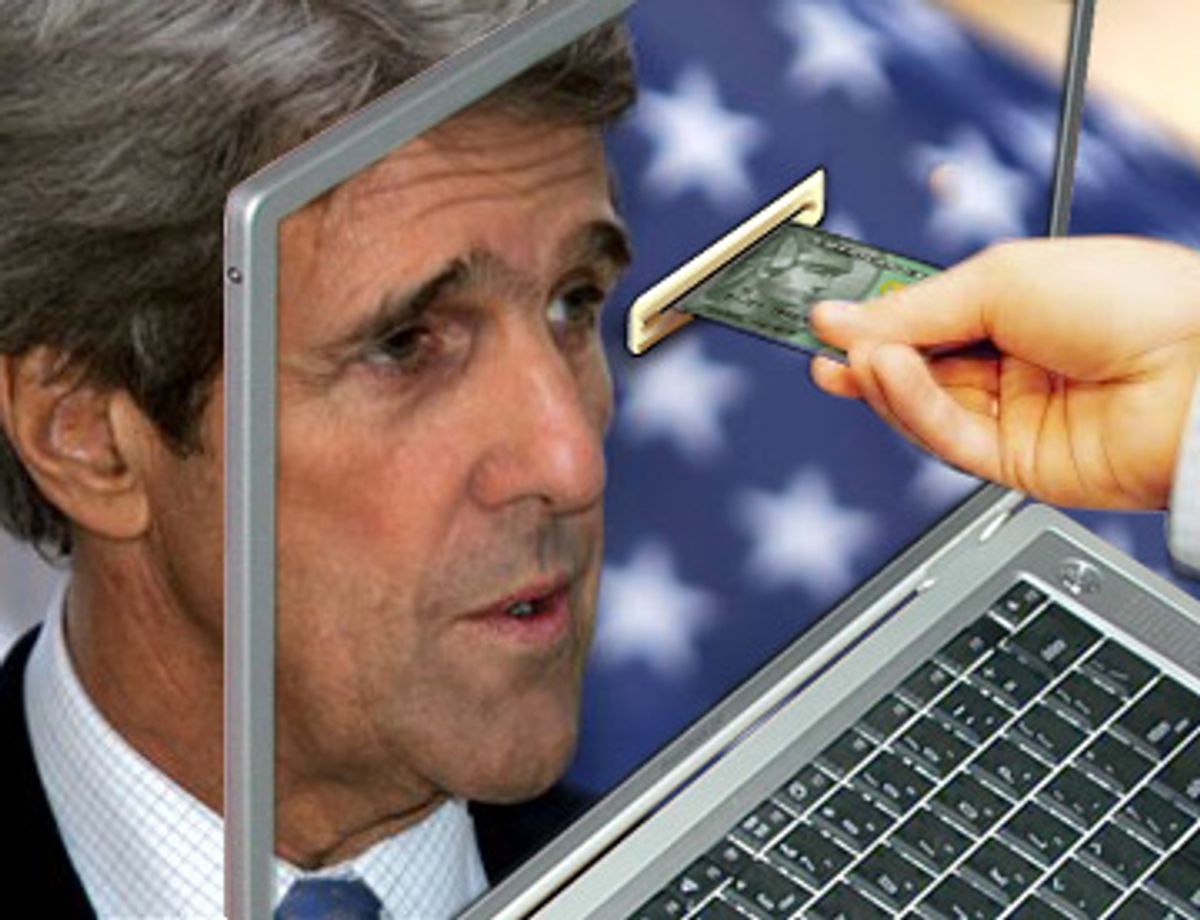 If you just look at his fundraising numbers, Massachusetts Sen. John Kerry appears to be in top political form, a veritable contender for the Democratic heavyweight title.

Among all of the 2008 White House wannabes, Kerry campaigned in more races (81), recruited more grass-roots volunteers (5,000), and gave money to more Democratic candidates (260) than anyone else during the last midterm election cycle. In 24 hours, his network of supporters drummed up and delivered $1 million to pay for the final media buys of four Senate candidates in close elections. In total, he raised and distributed to other Democrats $14 million, outdone only by Sen. Hillary Clinton, D-N.Y., who gave away $21 million. At Kerry's urging, Americans made 215,000 donations to Democrats before September.

Kerry was not only speaking of his efforts as a traditional Democratic leader, a man who toured the country with endless hotel ballroom appearances and obligatory telephone calls to high-dollar donors. He was also speaking about the performance of his e-mail list -- a 3-million-strong gold mine made up of supporters and donors to his 2004 presidential campaign. As much as any other single factor, the list allowed Kerry to establish himself as a major benefactor for Congress' incoming freshman class, a godsend who filled candidates' coffers at key times in the campaign. For Kerry, all it took was a few well-written paragraphs trumping the need for money, and a staffer willing to hit the send button for millions of e-mails.

But e-mail alone will never deliver a candidate to 1600 Pennsylvania Avenue. Especially John Kerry, whose status as one of the Democratic Party's most prolific fundraisers has not yet translated into tangible enthusiasm for his potential 2008 White House run. In fact, any Kerry 2008 campaign effort is already broadly seen to be on life support, hampered by a botched joke about President Bush in October, lingering resentment for his 2004 loss and mixed success with Kerry's most recent effort to reinvent himself as a muscular spokesman against President Bush's Iraq policy. A recent poll of political insiders by the National Journal did not even rank Kerry in a list of the top 10 Democratic contenders for the White House. And a likability poll by Quinnipiac University found that Kerry ranked near the bottom of presidential contenders in September, well before his October gaffe, which sent his approval numbers plummeting to dead last among 2008 contenders. On Monday, Kerry's friend and fellow Massachusetts Sen. Ted Kennedy even hinted in public comments that he may endorse a candidate for president in 2008 other than Kerry.

Online political strategists, who live and die by the effectiveness of e-mail solicitation, have no trouble explaining away the apparent disconnect between Kerry's prolific ability to raise money online and his inability to garner broader public support. E-mail solicitation, they explain, is only as good as the product it is selling, and Kerry's success during 2006 came largely because he was working so selflessly for a Democratic takeover of Congress. "It wasn't on the power of John Kerry," explained one Democratic Internet strategist, who did not want to be identified while criticizing Kerry. "It was on the power of his e-mail list, and frankly, if he runs for president, I doubt that list will support him."

This is a key lesson, say strategists, for the dozen or so presidential campaigns that are now developing their own online strategies for 2008. Internet donors do not demand the same degree of access and favors as traditional high-dollar donors, but there is a trade-off: They are also far less tied to any single personality in politics. Online, it is often the message that matters as much as the messenger. "In e-mail fundraising, what you ask people to try to do [determines] your credibility. It's all you've got," said Tom Matzzie, who helped raise $27 million in the 2006 cycle from MoveOn.org's 3.2 million-member e-mail list. "People will stick with you as long as your ask is credible." In other words, Kerry may have better luck motivating his list to give money to close Senate races on the eve of an election, when there is a high chance of a payoff, than to support his presidential aspirations, which appear to be more of a long shot.

Consultants working on the 2008 presidential campaigns have already begun making grand predictions about the Internet's evolving role as a sort of ATM machine for campaigns with exciting messages and candidates. "There is an unlimited amount of money," said Rich Galen, a longtime advisor to Newt Gingrich, a possible GOP presidential contender, at a recent campaign consultant forum sponsored by National Journal's Hotline and the University of Virginia. At the same event, other consultants fell over themselves expressing their enthusiasm about all the political money now ripe for the picking. "You can raise it quicker and raise it more easily," agreed Mark McKinnon, an advisor to Arizona Sen. John McCain and a former media director for President Bush's 2004 campaign. "Things can happen overnight."

But it remains an open question whether the flood of online money in 2008 will match the phenomenon of 2004, when all expectations were broken. Between the March primaries and the July convention in Boston, the Kerry campaign pulled in between $80 million and $85 million online, about 25 percent of all the money he raised. Even after the convention, when Kerry stopped accepting donations so he could take federal matching funds, his online fundraising machine continued to raise tens of millions of dollars for the Democratic National Committee.

"Not anybody can do this. This was a perfect storm of energy and passion, having an identifiable enemy [in President Bush] and a war," said David Thorne, a close friend of Kerry's who oversaw his Internet operation in 2004. "It is my question as to whether any 2008 candidate will be able to build the kind of list we built in 2004," he said. "My sense is not. The energy will be more dissipated." Ari Rabin-Havt, a former Kerry Internet advisor who now works for Nevada Sen. Harry Reid, the incoming majority leader, also cautioned presidential contenders against taking Internet fundraising for granted. "Consultants can not stick in their card and then pull cash out for their candidate," he said. "It takes work and a candidate who can really reach out."

Already there are some early standouts in online fundraising among Democrats from the 2006 cycle, though neither is a 2008 contender. Both Reid and Sen. Barbara Boxer, D-Calif., who will chair the Environment and Public Works committee, have been actively building their own e-mail lists through online solicitations and cross-promotions with groups like MoveOn. Though both e-mail lists number in the low six figures, they performed admirably in 2006, with Boxer raising nearly $1 million for other Democrats and Reid pulling in about $850,000, according to the campaigns. The Democratic National Committee, which shares many e-mail addresses with the Kerry list, also operates a list of about 3.5 million names, though the committee does not disclose how much money it raises online.

For many in online political consulting, Kerry's e-mail list is both a lesson in the power of the Internet and a cautionary tale of its limits. From the beginning, Kerry says he took seriously his responsibility to continue the work that his supporters started in 2004. "It just struck me," Kerry said, during the interview at his office in early December. "People put themselves on the line for this effort, and we shouldn't just go away." But even as Kerry sent out e-mails to promote everything from children's healthcare to fundraising for other candidates, it was clear that he was also attempting to use the list to rehabilitate his own image by undoing the miscues in the 2004 campaign, when Democrats blamed him for not being aggressive enough with Republican attacks. Kerry's e-mails regularly alerted readers of the "amazing response" to his speeches, warned of Republican "swift-boat style attacks," and repeatedly used language such as: "No matter what they throw at us in 2006 ... we will never surrender. We will always fight back."

Indeed, Kerry, the centrist presidential contender, has been actively rebranding himself as a hard-charging hero of the Democratic Party's liberal base, a role he had played previous to the 2004 campaign. In 2006, he sponsored a last-minute bid to filibuster Supreme Court Justice Samuel Alito, even though it was clear he had no chance of succeeding. He organized an equally symbolic petition and advertising campaign in late 2005 demanding that President Bush withdraw 20,000 troops from Iraq "for the holidays." With the help of his e-mail list, he was an early and visible proponent of replacing Defense Secretary Donald Rumsfeld. He has also advocated firing White House advisor Karl Rove and vocally supported Rep. Jack Murtha, D-Pa., after Murtha called for a withdrawal from Iraq.

Kerry's political action committee, Keep America's Promise, finished the 2006 cycle with receipts of $7.7 million, more than Sen. John McCain, R-Ariz., and Sen. Bill Frist, R-Tenn., were able to raise for their committees. "John has not changed a position in order to use his e-mail list," explains Thorne, who still advises Kerry. "[But] if you believe in five things, you may pick one that you will be able to raise money on."

Yet, Kerry's communications have caused several Democratic Party insiders to view the list as little more than a vanity project. "He actually thinks that the people who signed up between April and September of 2004 were doing it for him," said a second Democratic Internet consultant, who also asked that his name not be used. "That's the joke." Late in the 2006 campaign, some Democrats even went so far as to distribute links to a Web site demanding that Kerry give even more of his online fundraising to support other Democrats.

In the interview, Kerry was unapologetic about his personal use of the list. "When you run for office for yourself, [an e-mail list] is something you build up," Kerry said. "That's your domain, so to speak." He also pointed to the help he has provided other candidates in 2006. Winning veteran candidates for Congress, including Joe Sestak and Patrick Murphy in Pennsylvania, each received more than $100,000 from Kerry's online fundraising efforts. Virginia's Sen.-elect Jim Webb received nearly $400,000. "John Kerry's ability to raise money for Jim helped us in a big way," said Jessica Vanden Berg, Webb's campaign manager.

As for his 2008 prospects, Kerry says he is content to wait and see. Other voter misgivings about him aside, he sees his current standing in the polls as a reflection of the botched joke fiasco, when networks repeated ad nauseam a clip of Kerry appearing to disparage troops at a California rally on Oct. 30. "In advertising, frequency and reach are pretty important concepts," he said. "And the frequency and reach was not in my favor for a week. I took it on the chin, obviously. I understand that."

Kerry advisors have sent conflicting signals about how long Kerry will wait before making an official announcement about his White House ambitions, although no decisions are likely before the new year. "I've got to let the dust settle," Kerry continued. "In terms of measuring what you really did, and what you are accomplishing, and what you stand for, and who you are, I am very confident about who I am and where I am coming from on this." It remains to be seen how much the 3 million members of his massive e-mail list share in Kerry's confidence.