"What Is the What"

A scary interaction in America makes Valentino long to be back in a Sudanese refugee camp. 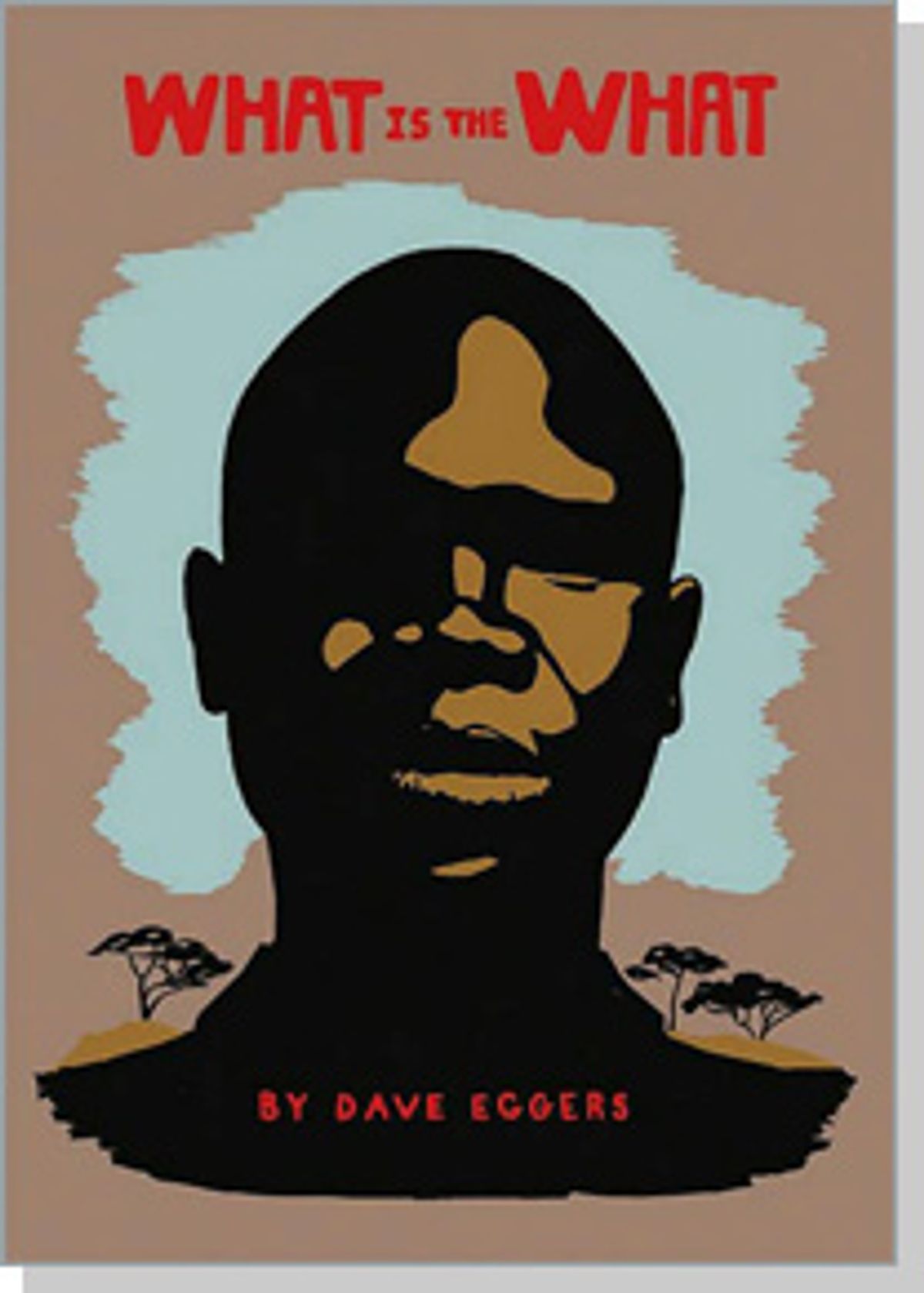 I have no reason not to answer the door so I answer the door. I have no tiny round window to inspect visitors so I open the door and before me is a tall, sturdily built African-American woman, a few years older than me, wearing a red nylon sweatsuit. She speaks to me loudly. "You have a phone, sir?"

She looks familiar. I am almost certain that I saw her in the parking lot an hour ago, when I returned from the convenience store. I saw her standing by the stairs, and I smiled at her. I tell her that I do have a phone.

"My car broke down on the street," she says. Behind her, it is nearly night. I have been studying most of the afternoon. "Can you let me use your phone to call the police?" she asks.

I do not know why she wants to call the police for a car in need of repair, but I consent. She steps inside. I begin to close the door but she holds it open. "I'll just be a second," she says. It does not make sense to me to leave the door open but I do so because she desires it. This is her country and not yet mine.

"Where's the phone?" she asks.

I tell her my cell phone is in my bedroom. Before I finish the sentence, she has rushed past me and down the hall, a hulk of swishing nylon. The door to my room closes, then clicks. She has locked herself in my bedroom. I start to follow her when I hear a voice behind me.

I turn and see a man, African-American, wearing a vast powder-blue baseball jacket and jeans. His face is not discernible beneath his baseball hat but he has his hand on something near his waist, as if needing to hold up his pants.

"Are you with that woman?" I ask him. I don't understand anything yet and am angry.

"Just sit down, Africa," he says, nodding to my couch.

I stand. "What is she doing in my bedroom?"

"Just sit your ass down," he says, now with venom.

I sit and now he shows me the handle of the gun. He has been holding it all along, and I was supposed to know. But I know nothing; I never know the things I am supposed to know. I do know, now, that I am being robbed, and that I want to be elsewhere.

It is a strange thing, I realize, but what I think at this moment is that I want to be back in Kakuma. In Kakuma there was no rain, the winds blew nine months a year, and eighty thousand war refugees from Sudan and elsewhere lived on one meal a day. But at this moment, when the woman is in my bedroom and the man is guarding me with his gun, I want to be in Kakuma, where I lived in a hut of plastic and sandbags and owned one pair of pants. I am not sure there was evil of this kind in the Kakuma refugee camp, and I want to return. Or even Pinyudo, the Ethiopian camp I lived in before Kakuma; there was nothing there, only one or two meals a day, but it had its small pleasures; I was a boy then and could forget that I was a malnourished refugee a thousand miles from home. In any case, if this is punishment for the hubris of wanting to leave Africa, of harboring dreams of college and solvency in America, I am now chastened and I apologize. I will return with bowed head. Why did I smile at this woman? I smile reflexively and it is a habit I need to break. It invites retribution. I have been humbled so many times since arriving that I am beginning to think someone is trying desperately to send me a message, and that message is "Leave this place."

As soon as I settle on this position of regret and retreat, it is replaced by one of protest. This new posture has me standing up and speaking to the man in the powder blue coat. "I want you two to leave this place," I say.

The powder man is instantly enraged. I have upset the balance here, have thrown an obstacle, my voice, in the way of their errand.

"Are you telling me what do, motherfucker?"

I stare into his small eyes.

"Tell me that, Africa, are you telling me what to do, motherfucker?"

The woman hears our voices and calls from the bedroom: "Will you take care of him?" She is exasperated with her partner, and he with me.

Powder tilts his head to me and raises his eyebrows. He takes a step toward me and again gestures toward the gun in his belt. He seems about to use it, but suddenly his shoulders slacken, and he drops his head. He stares at his shoes and breathes slowly, collecting himself. When he raises his eyes again, he has regained himself.

"All right then. That means we're brothers."

I am unwilling to agree.

"And because we're brothers and all, I'll teach you a lesson. Don't you know you shouldn't open your door to strangers?"

The question causes me to wince. The simple robbery had been, in a way, acceptable. I have seen robberies, have been robbed, on scales much smaller than this. Until I arrived in the United States, my most valuable possession was the mattress I slept on, and so the thefts were far smaller: a disposable camera, a pair of sandals, a ream of white typing paper. All of these were valuable, yes, but now I own a television, a VCR, a microwave, an alarm clock, many other conveniences, all provided by the Peachtree United Methodist Church here in Atlanta. Some of the things were used, most were new, and all had been given anonymously. To look at them, to use them daily, provoked in me a shudder -- a strange but genuine physical expression of gratitude. And now I assume all of these gifts will be taken in the next few minutes. I stand before Powder and my memory is searching for the time when I last felt this betrayed, when I last felt in the presence of evil so careless.