Don't believe the hype about murder

The real story of homicide in America is one of hope, especially for black men, who have long suffered the most. 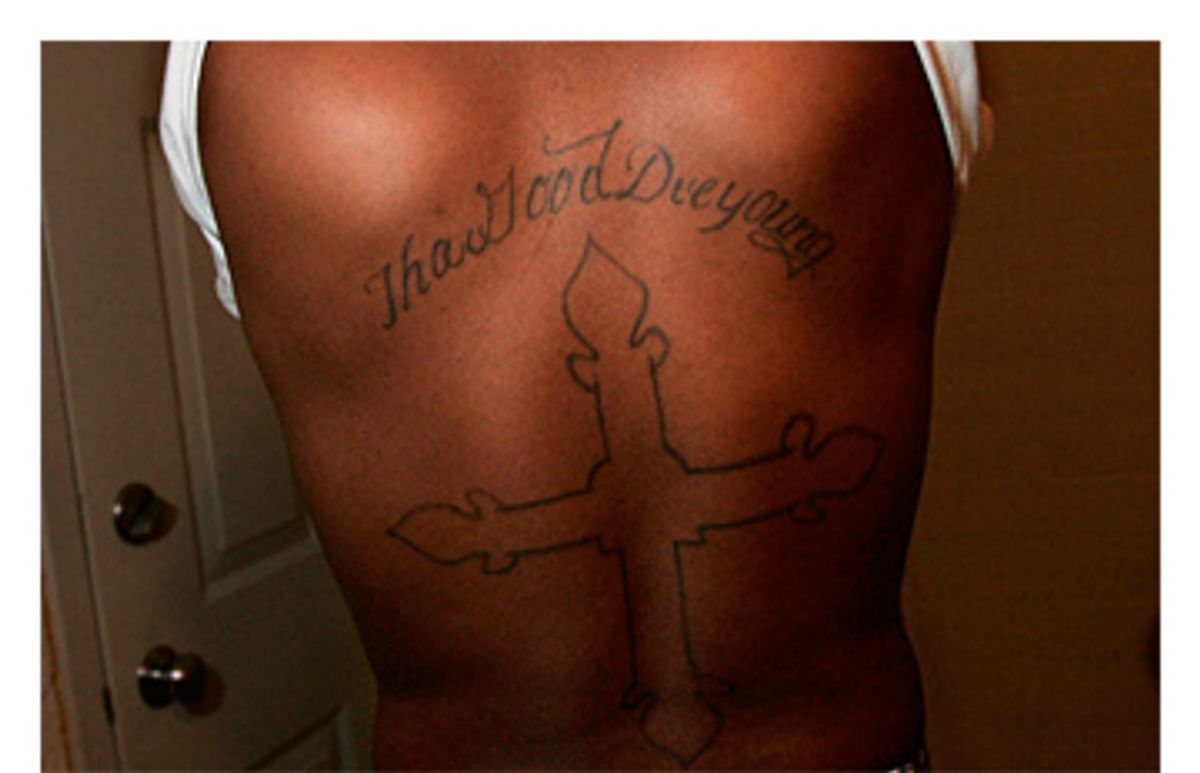 He had grown up in Compton, Calif., but until the age of 27, he had managed to avoid the risks of being a young black man in that part of Greater Los Angeles. He had no rap sheet and no gang affiliation, and had a job at a local youth center. Last week, Waters made one mistake: He wore a powder-blue shirt while visiting a friend near downtown L.A. A group of Blood gang members driving by took him for a rival Crip, and shot him dead on the sidewalk.

Waters' murder did not make the news in Los Angeles that week. Neither did that of 21-year-old Kevin Dinwitty, 19-year-old Raffik McClinton, 21-year-old Billy Grant Jr., nor of Marlon Luchien, 36, all killed the same week. The toll was typical for Los Angeles County, and I had only learned about the deaths of five black men in seven days because I cover homicide for the Los Angeles Times and I read all the coroner's reports once a week. There was no news in their deaths, just the same weary drumbeat Americans have grown accustomed to hearing -- that violent murder flourishes in the inner city, especially among blacks, and that things are generally getting worse.

The FBI's Uniform Crime Reports for 2005 showed more than a 3 percent uptick in murders from 2004, and the usual laments accompanied its release. We are told that crime, supposedly vanquished in the '90s, is back. We are told that gangs are spreading coast to coast, that pointless argument killings are on the rise, that a perverse new youth culture of violence has flowered in the inner cities, complete with bloodthirsty rap songs and anti-snitching T-shirts.

Crime rises and falls, but this alarmist story does not change. This was the news in the 1970s, the 1980s, the 1990s, and now again today. I have been covering homicide in South Central Los Angeles for five years, and most of the people I interview about crime -- including police officers and prosecutors who should know better -- insist to me that gangs are more violent today, that the crimes are more senseless. It's part of the mythology of urban street violence, and it's too bad.

That black men are a class unto themselves when it comes to homicide will not come as a surprise to most Americans. Black men are America's primary crime victims. Black men over 18 are only 4 percent of this country's population. Yet more are hospitalized for assault injuries each year than women and girls of all races combined. More black men died from homicide in 2004 alone than all the children aged 10 and under in the previous five years. Even domestic violence, which accounts for a fraction of homicides nationally, appears to have resulted in higher death rates for black men than for white women in recent years.

Nowadays, even after years of mostly falling or flat crime rates, black men still die from homicide at extraordinary rates. Black death rates from homicide in 2002 were almost six times that of whites. Black men 15 to 24 years old are most vulnerable -- some 85 per 100,000 died in 2004 from homicide, compared to a national average of six per 100,000.

But even these sky-high rates are lower than what they once were. The real story of black male homicide is that the historic disproportion between black and white death rates is shrinking, and it has been -- albeit unevenly -- for a long time.

The Centers for Disease Control and Preventon began keeping statistics for blacks as a separate group only in 1950. The agency's count shows that homicide death rates for black men then were 28 percent higher than in 2003 and 12 times the white male rate. Spikes in these rates came in the early 1970s, around 1980, and again in the recession years of the early 1990s. Each spike was roughly as high as the last. But running through these spikes is a gradual long-term trend of lower rates and racial convergence.

This suggests we need to take another look at the widespread assumptions that urban violence is the byproduct of modern street gangs, single-parent black families, crack cocaine and the proliferation of handguns. These things matter. But so do deeper and more enduring factors. The reality is that blacks in 1976 were almost twice as likely to die from homicide as blacks in 2004, and the disparity between black and white rates was 20 percent higher than today.

This is not news to most older black men I've interviewed in L.A. who describe living in acute fear as far back as the 1960s, long before anyone had heard of Crips or Bloods. "I'd always have an escape route in my head in case the knuckleheads tried to corner me," said Myron Wilson, 57, talking of his days growing up in L.A.'s Nickerson Gardens housing project in Watts. "A gang was the easy way out, your only defense."

Significant progress has happened very recently. Over the last dozen years or so, the nation has seen a startling crime drop that swamps the recent small rise in killings, and black rates have dropped especially steeply. Things can always reverse, of course, but so far this does not seem like the kind of brief, temporary downtick that drives news stories. It appears to be a steady, consistent trend that flies in the face of relentless pessimism about urban violence and undermines all the clichés about a senseless "cycle of violence" on the streets.

The reasons for the crime drop over the last decade have been endlessly debated and researched by scholars. Recent years have seen new studies of the impact on homicide rates of broken-windows policing, the trajectory of crack cocaine use, economic factors and imprisonment. All are probably important factors affecting crime trends. But less often examined are the historic factors that may be contributing to the long-term convergence between black and white homicide death rates. These factors deserve much more study.

A few are clear. One is the precipitous slide in domestic-violence murders in this country, which the criminologist James Alan Fox has documented for 30 years. Blacks -- particularly black men -- have benefited more than any other group.

Domestic violence is assumed to be most fatal for women. In fact, men, and especially black men, also have historically high death rates from domestic violence. Men usually die when their battered wives, trapped and desperate, can take it no more. In the mid-1970s, these "burning bed" killings meant that more black men than black women died from domestic-violence homicide.

The steady decrease in this kind of murder over the last 30 years may be due in part to advocacy and new domestic-violence laws. But Fox contends that family breakup is mostly to be thanked: Quite simply, abusive relationships are more likely to become deadly if the principals cannot escape. When divorce and changed economic opportunities for women make flight a better option, murders decrease.

So part of the reason domestic violence murder is down is the modern tendency for short-term, fleeting relationships that don't have time to settle into lethal patterns. The much-lamented rise of black single motherhood may be, in part, a triumphant declaration of independence by black women determined to escape abuse. In any case, Fox has shown that several hundred killings of black men and women yearly have vanished due to this trend. It's not enough to explain the full crime drop, but it's significant nonetheless.

Other possible explanations lie in unsung efforts by blacks to improve their lives. It's worth looking at the impressive increase in black high school graduation rates, for example, and also black efforts to suburbanize. The latter has had a powerful effect on what was once the crucible of homicide in South Central Los Angeles. Most South Los Angeles County neighborhoods, including traditional black strongholds in Watts and Compton, are now majority Latino. Blacks have dispersed themselves east into Riverside and San Bernardino County suburbs; new Latino immigrants have lower homicide rates. As a result, an extremely concentrated knot of homicide risk in one of America's toughest urban areas has been broken up, and L.A., by itself a significant contributor to national homicide rates, has seen its overall rate decline.

I also think there is a possibility that improvement has come with increased black engagement with law enforcement, a critical factor in reducing homicide. This may seem counterintuitive given the bitter resentment against police that persists in black communities and the endless media controversy over police shootings and beatings. But I think American police forces in the 1970s - in major cities as well as in the newly post-Jim Crow South -- were seen by blacks as more unambiguously oppressive and hostile than the police of today.

Black men still guide their cars to crowded, well-lighted places before pulling over for police. But in South Central Los Angeles, they are also intimately entangled with their police. They know officers' names, call them all the time, nag them to solve their homicides even as they complain of mistreatment. It's a complicated relationship, as it should be. Moving toward trust is a painful process, fraught with emotion. Life is simpler when your enemy is just an enemy.

None of this is enough, of course. A storm of personal violence still rages among black men. In Los Angeles, this storm is so concentrated it would be absurd if the results were not so agonizing. I've walked blocks where half the black families are grieving a homicide victim. Medical examiners in Los Angeles County commonly record the scars of previous gunshot wounds when they autopsy black male homicide victims. It's as if these men were being used for target practice, surviving shot after shot until the fatal one. Black men in South Central Los Angeles describe having to constantly watch their backs. "Caught slippin'" is their slang expression for being murdered. It expresses their worldview: Menace is constant. A split second's inattention, like Terell Waters' choice of a blue shirt, and the statistics catch up with you.

To read press accounts, one has a sense that we are in an intellectual and political rut when it comes to the black homicide problem. Alarmism aside, there is reason for immediate concern. Murders are rising again. Criminologists disagree on what this means. Some worry that we are on the brink of another epidemic of violence, like the one during the recession of the early 1990s. Others say it's a continuation of the wobbly but essentially flat pattern we have seen for nearly a decade.

My own opinion is that the long-term facts about murder, even if they are no comfort to the family and friends of Terell Walters, don't warrant pessimism. Although the gap between black homicide death rates and those of every other group in America remains unacceptably large, things have changed. So they can change further. There's hope. History suggests that we should be wary of any claims about some unprecedented spiral into nihilism in the inner city, since such claims are perennial. History suggests that it is worth asking questions different from the ones we have been asking, and that we should take the longer view.

Jill Leovy is a staff writer for the Los Angeles Times. She is working on a book about African Americans and murder. Many of the statistics in this piece are her own calculations using WISQARS, a database of the Centers for Disease Control, and information from the United States Census Bureau and the Department of Justice.