Michael Pollan looks at the supermarket with fresh eyes in the first chapter of his latest book. 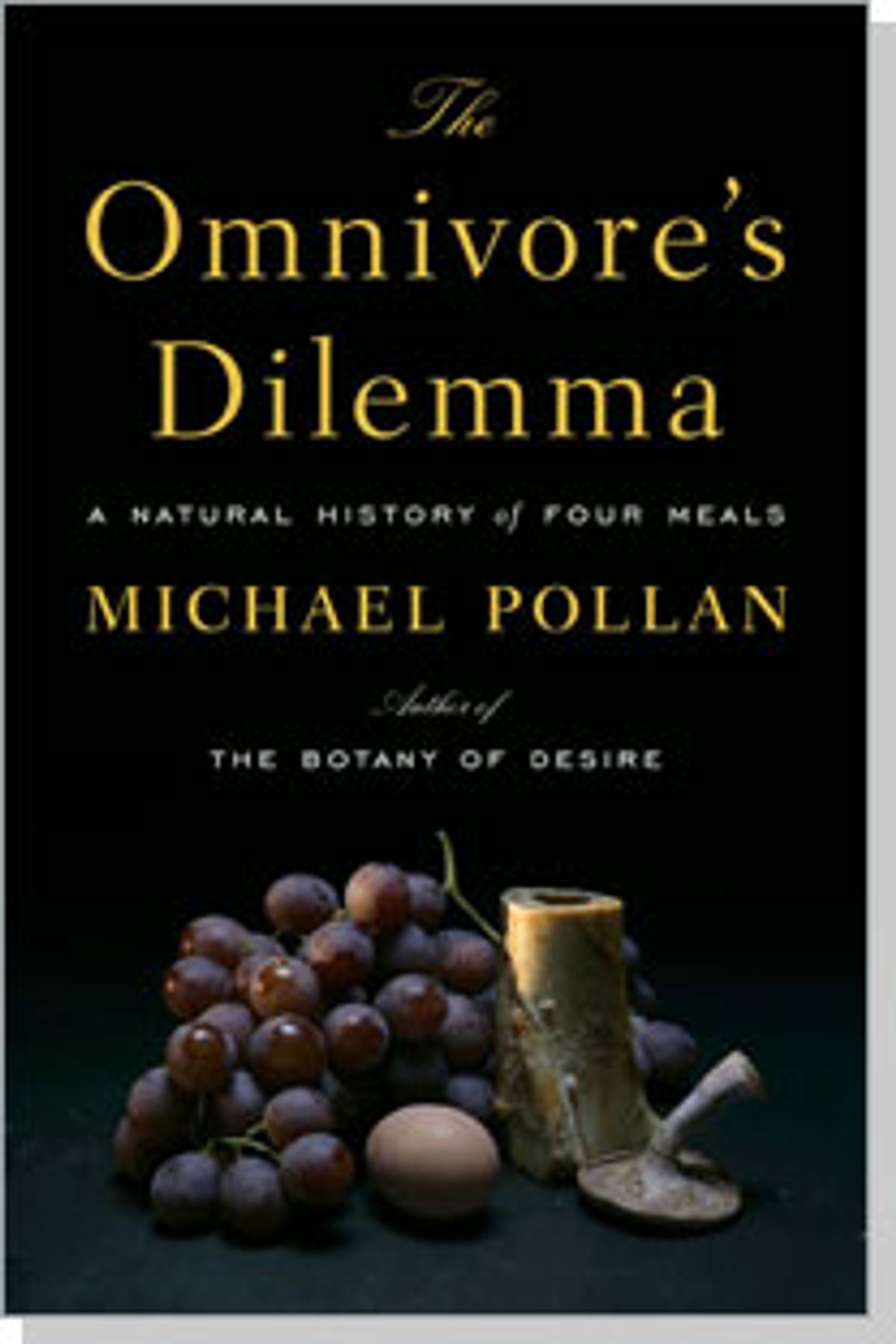 A Naturalist in the Supermarket

Air-conditioned, odorless, illuminated by buzzing fluorescent tubes, the American supermarket doesn't present itself as having very much to do with Nature. And yet what is this place if not a landscape (manmade, it's true) teeming with plants and animals?

I'm not just talking about the produce section or the meat counter, either -- the supermarket's flora and fauna. Ecologically speaking, these are this landscape's most legible zones, the places where it doesn't take a field guide to identify the resident species. Over there's your eggplant, onion, potato, and leek; here your apple, banana, and orange. Spritzed with morning dew every few minutes, Produce is the only corner of the supermarket where we're apt to think "Ah, yes, the bounty of Nature!" Which probably explains why such a garden of fruits and vegetables (sometimes flowers, too) is what usually greets the shopper coming through the automatic doors.

Keep rolling, back to the mirrored rear wall behind which the butchers toil, and you encounter a set of species only slightly harder to identify -- there's chicken and turkey, lamb and cow and pig. Though in Meat the creaturely character of the species on display does seem to be fading, as the cows and pigs increasingly come subdivided into boneless and bloodless geometrical cuts. In recent years some of this supermarket euphemism has seeped into Produce, where you'll now find formerly soil-encrusted potatoes cubed pristine white, and "baby" carrots machine-lathed into neatly tapered cylinders. But in general here in flora and fauna you don't need to be a naturalist, much less a food scientist, to know what species you're tossing into your cart.

Venture farther, though, and you come to regions of the supermarket where the very notion of species seems increasingly obscure: the canyons of breakfast cereals and condiments; the freezer cases stacked with "home meal replacements" and bagged platonic peas; the broad expanses of soft drinks and towering cliffs of snacks; the unclassifiable Pop-Tarts and Lunchables; the frankly synthetic coffee whiteners and the Linnaeus-defying Twinkie. Plants? Animals?! Though it might not always seem that way, even the deathless Twinkie is constructed out of . . . well, precisely what I don't know offhand, but ultimately some sort of formerly living creature, i.e., a species. We haven't yet begun to synthesize our foods from petroleum, at least not directly.

If you do manage to regard the supermarket through the eyes of a naturalist, your first impression is apt to be of its astounding biodiversity. Look how many different plants and animals (and fungi) are represented on this single acre of land! What forest or prairie could hope to match it? There must be a hundred different species in the produce section alone, a handful more in the meat counter. And this diversity only appears to be increasing: When I was a kid, you never saw radicchio in the produce section, or a half dozen different kinds of mushrooms, or kiwis and passion fruit and durians and mangoes. Indeed, in the last few years a whole catalog of exotic species from the tropics has colonized, and considerably enlivened, the produce department. Over in fauna, on a good day you're apt to find -- beyond beef -- ostrich and quail and even bison, while in Fish you can catch not just salmon and shrimp but catfish and tilapia, too. Naturalists regard biodiversity as a measure of a landscape's health, and the modern supermarket's devotion to variety and choice would seem to reflect, perhaps even promote, precisely that sort of ecological vigor.

Except for the salt and a handful of synthetic food additives, every edible item in the supermarket is a link in a food chain that begins with a particular plant growing in a specific patch of soil (or, more seldom, stretch of sea) somewhere on earth. Sometimes, as in the produce section, that chain is fairly short and easy to follow: As the netted bag says, this potato was grown in Idaho, that onion came from a farm in Texas. Move over to Meat, though, and the chain grows longer and less comprehensible: The label doesn't mention that that rib-eye steak came from a steer born in South Dakota and fattened in a Kansas feedlot on grain grown in Iowa. Once you get into the processed foods you have to be a fairly determined ecological detective to follow the intricate and increasingly obscure lines of connection linking the Twinkie, or the nondairy creamer, to a plant growing in the earth some place, but it can be done.

So what exactly would an ecological detective set loose in an American supermarket discover, were he to trace the items in his shopping cart all the way back to the soil? The notion began to occupy me a few years ago, after I realized that the straightforward question "What should I eat?" could no longer be answered without first addressing two other even more straightforward questions: "What am I eating? And where in the world did it come from?" Not very long ago an eater didn't need a journalist to answer these questions. The fact that today one so often does suggests a pretty good start on a working definition of industrial food: Any food whose provenance is so complex or obscure that it requires expert help to ascertain.

When I started trying to follow the industrial food chain -- the one that now feeds most of us most of the time and typically culminates either in a supermarket or fast-food meal -- I expected that my investigations would lead me to a wide variety of places. And though my journeys did take me to a great many states, and covered a great many miles, at the very end of these food chains (which is to say, at the very beginning), I invariably found myself in almost exactly the same place: a farm field in the American Corn Belt. The great edifice of variety and choice that is an American supermarket turns out to rest on a remarkably narrow biological foundation comprised of a tiny group of plants that is dominated by a single species: Zea mays, the giant tropical grass most Americans know as corn.