Stop! In the name of love

The Supremes embodied soul music with a light touch in the face of heartache. "Dreamgirls" stomps on the band's legend. 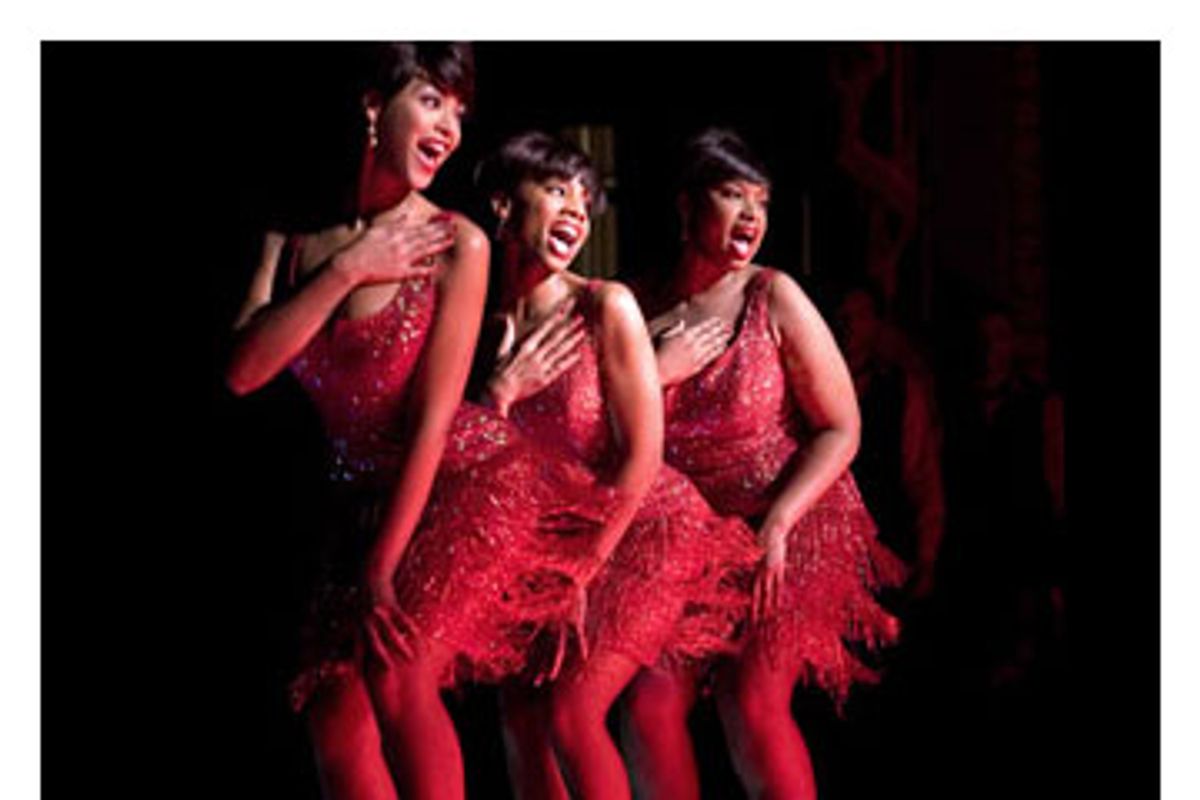 "The Rolling Stone Illustrated History of Rock and Roll" includes a wonderful photograph of the original Supremes -- Mary Wilson, Diana Ross and founder Florence Ballard -- circa 1965, posing in front of a supermarket display of their very own brand of bread, Supremes Bread. As the biggest and most marketable Motown act of the time, the Supremes could have lent their names to just about anything, and we can only imagine that impresario Berry Gordy -- the man who made the Supremes larger than life -- sold them out for loaves of white bread, in puffy white wrappers bearing their likeness, simply because the price was right.

White bread may be an enduring symbol of blandness and of whiteness, but this photograph -- showing us three women smiling dutifully for the camera, dressed in luxe, boxy coats and wearing shellacked wigs that could withstand any windstorm -- is, to me, more touching than it is ironic. Today, pop stars lend their faces and bodies to expensive watches and designer clothes, but the Supremes, who found fame in very different times, lent their glamour to something anyone could buy. Their sound, whipped full of air and wonder, lofty and light even in the face of hardship and heartache, was magic as commodity: It was the staff of life, packaged.

"Dreamgirls," originally brought to the Broadway stage by Michael Bennett in the early 1980s and now a movie musical directed by Bill Condon, is another kind of package, one that commodifies the Supremes' story by turning it into something shrink-wrapped, airless and glitzy. "Dreamgirls" -- which opens today for one week at the Ziegfeld Theater in New York, and nationwide on Dec. 25 -- is a fictional version of the Supremes' rise to fame and the ensuing rifts and rivalries between its members: A Detroit singing trio -- they start out as the Dreamettes, later dropping the "ettes" -- become huge stars with the guidance of a sharp but duplicitous manager, Curtis Taylor Jr. (Jamie Foxx). The group's frontwoman, Effie White (2004 "American Idol" finalist Jennifer Hudson), is a pretty powerhouse with a big voice and a lush, zaftig figure to match; she's also Curtis' girl. As Curtis grooms the trio to succeed not just in Apollo Theater-type venues but in swanky supper clubs as well (in other words, he's training them to jump color and class barriers), he pushes Effie, with her very big, very black voice, into the background, and makes her willowy, glamorous co-member, Deena Jones (Beyoncé Knowles), the trio's star; third member Lorrell Robinson (Anika Noni Rose) is simply eager for success and goes along with the power play. Deena's voice has the "lighter" -- in other words, whiter -- touch Curtis is looking for; the subtext is that Effie is too intimidating for white audiences, too coarse for the aura of elegance Curtis wants to cultivate for the group.

All of those things essentially happened to the Supremes, too: Even though Florence Ballard had the strongest voice of the three women, Berry Gordy ultimately pushed the vixenish Diana Ross into the lead singer's slot. The snub deeply troubled Ballard, and she was fired from the group in 1967; she died in poverty in 1976, after several failed attempts to launch a solo career.

It's the kind of story that's almost too big to be contained by fiction, and "Dreamgirls" -- beginning with Tom Eyen's book, which was adapted by Condon for the screen -- doesn't come close to mapping the alternately sad and joyous contours of that story. This is a puny, pinched vision of R&B history and of R&B itself, a sanitized, show-tunized reading of some of the greatest pop music to come out of the 1960s. An early scene in "Dreamgirls" features a speech about how the white man has repeatedly stolen from the black man, and yet the show's music sounds like one massive instance of thoughtless appropriation. The songs -- with lyrics by Eyen and music by Henry Krieger -- sound nothing like those that came out of Motown (with their repetitive but dreamily seductive Holland-Dozier-Holland hooks); they have the toe-tapping sheen of the phoniest show music, as if you could give a melody soul just by wriggling your spirit-fingers extra-hard. Even the movie's alleged showstopper, the bloated ballad "And I Am Telling You I'm Not Going" (made famous by Jennifer Holliday, who originated the role of Effie onstage) is less a song than a diaphragm workout, a number designed to prove how physically demanding it is to pull off. When Hudson's Effie performs it here, you can see her trying to find some emotional footing on this craggy Matterhorn. It's a testament to Hudson's gifts as a singer, and to her unsugary effervescence, that she actually comes close to making the song mean something. (And even then, the sequence is cut so clumsily we're barely allowed to watch her; editor Virginia Katz -- who has done terrific work elsewhere, particularly on "Jet Li's Fearless" -- has chopped the number into little bits, distracting us from Hudson's unshakable focus.)

Even taken on its own terms, divorced from the real story of Motown and the Supremes (if it's even possible to do so), "Dreamgirls" is a frenzied, slapdash exercise, a dramatic slice-and-dice in which scenes zip past us in an inconsequential blur. Characters have crises before they even have personalities (if they're ever lucky enough to get personalities). When Beyoncé's Deena wails to Foxx's Curtis, who has become her controlling, obsessive husband as well as her manager, "Maybe you just don't see me for who I am," we can't really blame the guy: We have no idea who she is, either. In "Dreamgirls," Deena isn't a delectable villainess or even a guileless victim; she observes the machinations around her -- chief among them Curtis' cruel treatment of Effie, whom she supposedly loves like family -- with nothing but a blank, glazed gleam in her beautifully almond-shaped eyes. Diana Ross may not have a reputation for being a sweetheart, but you can't say she's not fascinating: In performance footage of the group, you can sometimes see her brittle ambition nearly breaking through her winsomeness -- she's one of those pop-culture figures who's easier to love than to like. But "Dreamgirls" asks nothing of Beyoncé, an appealing presence who's untested as an actress: All she has to do is wear a succession of alternately sequined and slinky outfits and blink her big Bambi eyes; even her musical numbers are dwarfed by Hudson's. She's less a dream girl than a waxy living doll.

"Dreamgirls" vibrates with not-so-hidden messages and meanings, among them "Sisterhood is powerful" and "You can be what you want to be if only you dare to dream." Maybe the picture would be more pleasurable if it weren't so laden with hefty empowerment lessons, if it were constructed as a sharp, sly entertainment like Rob Marshall's film of Bob Fosse's "Chicago" (which Condon also adapted for the screen).

Even some of the performers seem a bit confused about how seriously to take the whole enterprise: Jamie Foxx plays a cardboard villain, a guy who bulldozes his way through other people's lives to make his dreams come true, but we never quite understand how he pulls it off -- his charisma has only a flat, dull surface glow. (It's hard to believe this is the same actor who gave so much dimension to Ray Charles in Taylor Hackford's "Ray.") Other actors have more impact in much smaller parts: Anika Noni Rose plays Lorrell as a sweet, ditzy charmer; Keith Robinson, as Effie's brother and the group's chief songwriter, C.C. White, gives a relatively slight role some interesting gravity. And Eddie Murphy, as James "Thunder" Early, one of Curtis' earliest acts and one who is, like Effie, ultimately betrayed by him, has some wonderful scenes: He brings glammed-up grace to his early song-and-dance numbers, momentarily distracting us from how lousy the songs are. And he's deeply moving in some of his later scenes. Murphy doesn't let his guard down readily -- he's more of a showman, a dazzler -- and when he does, you feel you've been let in on a closely guarded secret.

Whatever the flaws of "Dreamgirls" may be, there's no escaping the allure of Jennifer Hudson. Hudson has a hearty voice and a luscious, rounded figure, and yet she gives the picture the very dashes of lightness it so sorely needs. Even in her later scenes, when hardship threatens to crush Effie, she maintains a quiet, serene equilibrium -- there's nothing brassy or false about her. Hudson gets far less screen time than Beyoncé does, even though she's practically the movie's lifeblood.

"Dreamgirls" was a beloved stage musical, and I suspect plenty of people will love this movie, too. But it's troubling that a prefab production like "Dreamgirls" is poised to be a hit, while the most original movie musical of the past few years (if not of many years), Bryan Barber's Prohibition-era fantasy "Idlewild," disappeared from the movie landscape with barely a flicker. "Idlewild" is a celebration not just of black culture but of all pop culture, a rapturous patchwork of movie conventions that results in something deeply unconventional.

By comparison, "Dreamgirls" gives us everything we expect, and less. Murphy's James "Thunder" Early is an R&B performer who's James Brown, (a straight) Little Richard, Sam Cooke and Marvin Gaye all rolled into one. Composite characters are a staple of fiction. And yet there's something unsettling about the very conception of this figure, as if all black pop music were of a piece, as if even its greatest voices were interchangeable. "Where did our love go?" the Supremes once asked us, a question so bold in its simplicity that some of us have never gotten over it. There's so little love to be found in "Dreamgirls." It's a product that promises magic, and yet gives us nothing to live on.