Clooney looks great -- again -- in black-and-white. But "Good German" is no "Good Night." 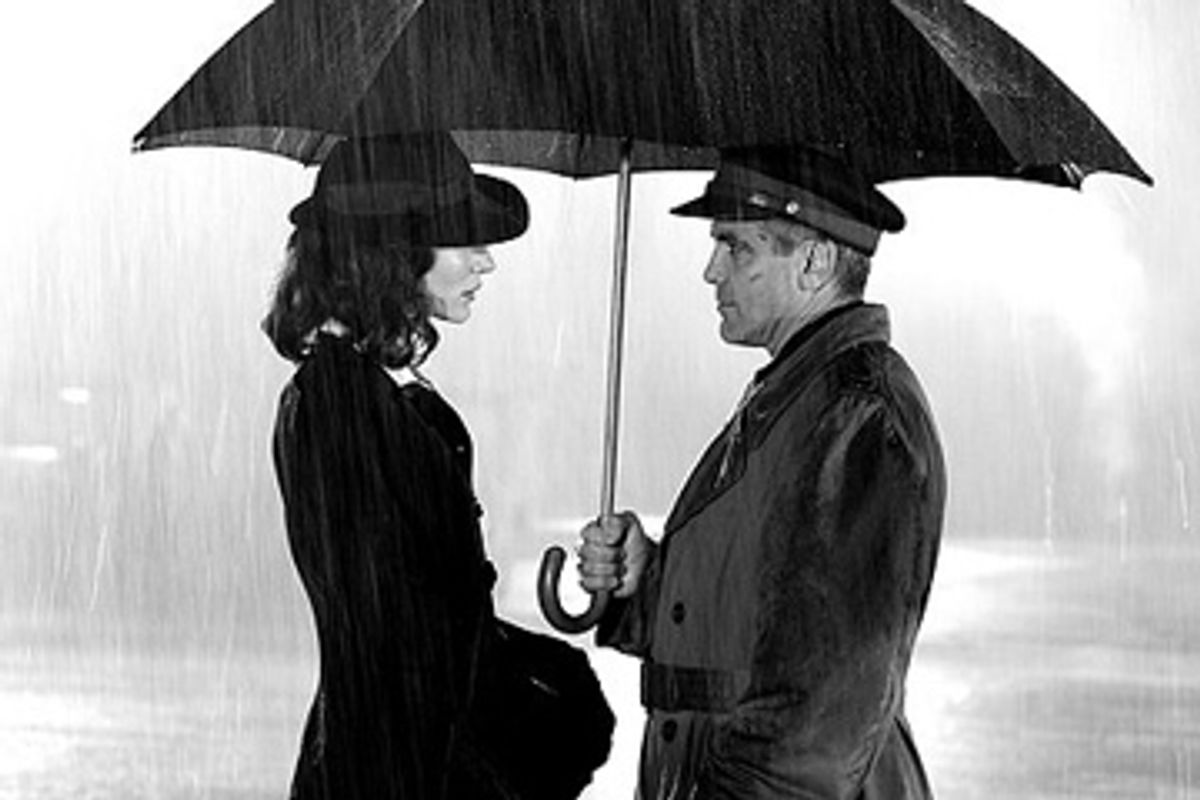 Steven Soderbergh is a director who'll try anything. That doesn't mean he should. "The Good German," its script by Paul Attanasio, is supposedly an adaptation of Joseph Kanon's crisply observed and atmospheric novel about an American journalist who finds intrigue and mournful romance in postwar Berlin, although there's no way you'd know it: Attanasio and Soderbergh have made Kanon's story both cruder and more incomprehensible, as if they were schoolboys embarrassed by its bleak romanticism. The movie they've made, shot in dim, two-dimensional black-and-white by Soderbergh himself, is supposedly a nod to '40s filmmaking (its final scene is a low-toner Xerox of the end of "Casablanca"), only Soderbergh and Attanasio have peppered it with things you'd never hear or see in a '40s movie, like profanity, rough violence and on-screen fornication. Kewl! They seem to think they're giving old-timey sentimental crap a good licking, but all they're really doing is proving how little they understand postwar (or wartime) American filmmaking in the first place.

In Kanon's novel, the protagonist, Jake Geismar, spends a great deal of time searching wistfully for his lost love, a German woman named Lena. When he finally locates her, she's virtually a wraith, weakened by war and hardship. She faints into his arms, having been made seriously ill by a botched abortion. (She's been raped by a Russian soldier.) In the Soderbergh version, the first time we see Lena (Cate Blanchett), a sleazy American soldier named Tully (Tobey Maguire, in a performance that's about as vital as hot tar, or maybe less so) is giving her the high hard one, doggie-style. She later emerges from the bedroom in her dressing gown, eyeing Tully coolly, and he asks her demeaningly about how she likes her "work." (Hard times have driven her to prostitution.) Later, when she pisses him off by refusing to answer a more important question, he punches her in the stomach, an act that's presented flatly and dispassionately, giving the scene a cheap, cynical veneer.

Maybe Soderbergh and Attanasio are both attracted to and repulsed by wartime mythology, which renders them unable to deal with it in any honest, meaningful way. They certainly don't know what to do with an old-fashioned movie-star type like George Clooney, who plays Geismar. There's no doubt Clooney's Jake looks great in the uniform (even though he's a journalist and not a soldier, the government requires him to wear one): With that peaked cap pulled low over his eyes, you'd think he'd be able to command even the most ill-conceived picture. Clooney looks good here, at least when we can actually see his face, since Soderbergh doesn't seem to get that black-and-white cinematography demands as much understanding of shadow as of light. (He's invented a new style: not German Expressionist, but German Glaucoma.) But even though Clooney looks OK, he's completely lost. The stylized dialogue Attanasio has given him practically sticks in his throat. For some reason, Soderbergh and Attanasio decided that Clooney's character, the hero, should get beaten up -- a lot. So we're treated to sequences in which Jake is walloped in the stomach and then kicked after he falls to the ground, gets whacked over the head with a heavy wooden chair, and has the butt of a rifle cracked across his face. Is this Soderbergh's way of deflating machismo, or getting high on it? I have no idea, and I don't think he does, either.

Blanchett, whose perfectly chiseled face gives her a classic Hollywood-star quality that's analogous to Clooney's, fares even worse. Her Lena is a woman with many secrets, but the movie is so sour that it's hard to care what they might be. In one scene she examines her reflection in the mirror, admiring herself in a new dress of superior postwar quality, and says, in an exaggerated falling-in-love-again German accent, "Look at these sleeves, all this ruching! Nobody ever wears anything like this anymore!" Not even the extraordinary Blanchett can carry off ruched lines like that.

It's not at all clear why Soderbergh thinks he needs to undercut the so-called romance of wartime filmmaking since, by 1945 (the year in which "The Good German" is set), American filmmakers were already doing a pretty good job of undercutting wartime romance themselves. The war had barely ended before hard-bodied little noirs like Edgar G. Ulmer's "Detour," Billy Wilder's "Double Indemnity" and Henry Hathaway's "Call Northside 777" started springing up on the American film landscape. And William Wyler's "The Best Years of Our Lives" -- not a noir but a movie explicitly about postwar disillusionment -- is a singularly tough-minded piece of moviemaking. With "The Good German," Soderbergh -- generally a terrific and creative filmmaker -- apes a style, and a way of seeing, that he clearly doesn't understand. It feels like a hit to the stomach.