The case of the disappearing candidates

Evan Bayh says no thanks, while John Edwards is reportedly running. But will the star power of Clinton and Obama shrink the presidential field before Democrats cast a single vote? 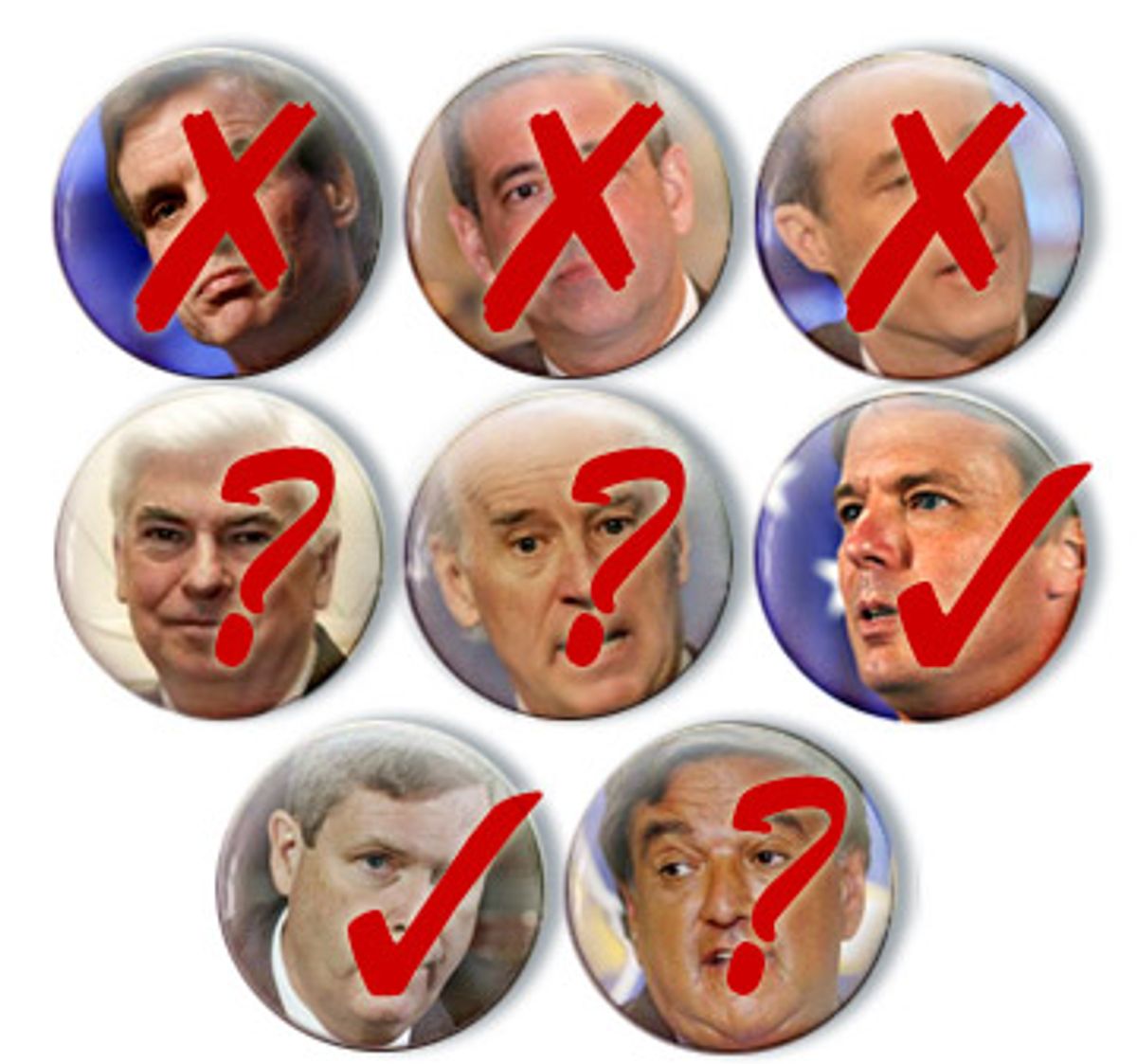 On March 4, 1976, Indiana Sen. Birch Bayh ended his campaign for the Democratic presidential nomination after finishing a weak third in the New Hampshire primary and then following that up with a paltry 5 percent of the vote in the Massachusetts primary.

Thirty years later, his son, Indiana Sen. Evan Bayh, abandoned his own quest for the White House on Saturday -- 13 months before the New Hampshire primary -- unexpectedly telling supporters in a statement, "I concluded that due to circumstances beyond our control, the odds were longer than I felt I could responsibly pursue."

The difference between these two ill-fated, father-and-son efforts illustrates how presidential politics have evolved over three decades. Back in the quaint 1970s, actual voters weighed Birch Bayh's political fate in the balance before rejecting it. This time around Evan Bayh made his calculation based on money (a bare-bones campaign for the nomination might cost $35 million), poll numbers (his support in Iowa and New Hampshire was, to put it charitably, at difficult-to-measure levels) and the caliber of the opposition (Hillary Clinton and the skyrocketing Barack Obama).

With former Virginia Gov. Mark Warner, Wisconsin Sen. Russ Feingold and now Bayh all jettisoning presidential bids in recent months, it is beginning to look as if Democratic voters are fast becoming irrelevant in winnowing down the field of potential candidates. The choice in a presidential race is only as good as the supply of candidates. If the field gets narrowed before the opening-bell January 2008 Iowa caucuses and New Hampshire primary, then the voters and the Democratic Party will be deprived of a lusty debate on the nation's and the party's future.

Sure, retiring Iowa Gov. Tom Vilsack has already declared his candidacy, and the Associated Press reported Saturday that 2004 vice-presidential nominee John Edwards will make it official sometime between Christmas and New Year's. (Ohio Rep. Dennis Kucinich also says he is running, but after his woeful performance in the 2004 primaries and caucuses, he more resembles 20th century perennial candidate Harold Stassen than a plausible contender.) Waiting in the wings, as they mull their final decisions, are New Mexico Gov. Bill Richardson, who spoke in New Hampshire over the weekend, and veteran Sens. Joe Biden of Delaware and Chris Dodd of Connecticut.

Some of these potential long shots may fall by the wayside during the long preliminary jousting in 2007, discovering that they cannot raise enough money (the pace required is more than $500,000 per week with no contribution larger than $2,100) to mount a credible campaign. Antiwar Sen. Bob Graham was saddled with that problem in 2003, as he learned that vague promises by campaign fundraisers are different from actual checks. Graham dropped out three months before the Iowa caucuses.

Edwards, at least, boasts the strong backing of two of the most important interest groups in the Democratic Party -- trial lawyers (whom the campaign prays will be good for $20 million in contributions) and organized labor. The former North Carolina senator also has a potent issue (the eradication of poverty) that distinguishes him from the rest of the Democratic field. Edwards will reportedly declare his candidacy in the Lower Ninth Ward of New Orleans, to underscore the wrenching aftereffects of Hurricane Katrina for the poor.

Part of Bayh's problem was that he had not latched onto a campaign theme, nor did he have an obvious source of campaign funds beyond the $10 million that he would have been allowed to transfer from his Senate reelection account. The breadth of his résumé (he's a former two-term red-state governor who currently serves on the Senate Intelligence Committee) would have been an advantage, but it would have been hard for an even-keeled moderate Democrat like Bayh to make waves in a contest presumably dominated by history-making figures like Clinton and Obama. Yet Bayh's hunger for something beyond the Senate was palpable -- as he campaigned for House candidates in southern Indiana in late October, he kept telling home-state audiences that his favorite job was being governor and that he longed for that kind of decision-making authority.

The tentative Bayh campaign scenario called for him to concentrate virtually all of his efforts on Iowa and New Hampshire in hopes of a breakthrough. But even this two-state strategy would have been expensive enough to stretch the limits of Bayh's financial supply lines. Since Bayh would have been virtually unknown amid a crowd of celebrities (Clinton, Obama and Edwards, who surged from nowhere to almost win the 2004 Iowa caucuses), the Indiana senator probably would have begun running TV commercials in the spring of 2007 to introduce himself to voters before ad clutter made every candidate commercial sound alike.

But the real difficulty for Bayh, Edwards, Vilsack and everyone else trying to crowd into the limelight is the obvious impatience of news executives with uncertainty. Counterprogramming against Time's "Person of the Year," Newsweek this week fires the starting gun with a 2008 Clinton-vs.-Obama cover, implying that other potential candidates (white males all) need not apply. The Clinton and Obama declarations of candidacy (presuming they both actually run) will be covered by television with Princess Diana-like intensity. In contrast, Edwards presumably chose the tag end of 2006 for his announcement in hopes of getting major media attention during what is traditionally the slowest news week of the year.

Yet the TV news notion that the Democratic choice has already been winnowed down to Hillary versus Barack is ludicrously premature. From Jimmy Carter (1976) to Gary Hart (1984) to Bill Clinton -- the self-proclaimed "Comeback Kid" in 1992 -- the history of presidential politics is filled with rags-to-riches sagas, which sometimes lead to the presidency and sometimes fall tantalizingly short of the nomination. Four years ago at this time, Howard Dean was a mere blip on the Democratic radarscope, the retiring governor almost universally dismissed as a candidate who could not raise enough money or garner enough attention to mount a serious campaign.

Lynch is partly playing booster for one of his state's major tourist attractions. But the governor -- who was the executive director of the state Democratic Party in the Carter miracle year of 1976 -- also seems genuinely caught up in the faith that the road to the White House passes through New Hampshire living rooms.

Referring to Obama, who had recently spoken to an unprecedented-for-New Hampshire huge political crowd, Lynch said, "If he's going to do well in New Hampshire, he still has to decide for himself that he's going to engage in retail politics that New Hampshire demands of its candidates. That means not only coming to events where there are 1,500 people and 150 representatives of the media, but also going into people's homes and kitchens and small groups and meeting with them in that context. That's the way you win New Hampshire."

Lynch may be right -- and the challenge for Clinton and Obama, both of whom will travel with security details, will be how to play small for Iowa and New Hampshire when the entourages and the expectations surrounding them will be so huge. But it is also possible that Lynch and the press bards of old-fashioned presidential campaigns (myself very much included) are longing for a tradition and an era that is inevitably vanishing in the face of the politics of celebrity. And that is what separates Evan Bayh's thwarted presidential dreams from those of his father.