Victory, or Bushmills in the bunker

A play for the holidays, in which President Bushmills, President of Vice Chainsaw, and Secretary of Hate Rice-Cakes take cover from their trademarked war on terror. 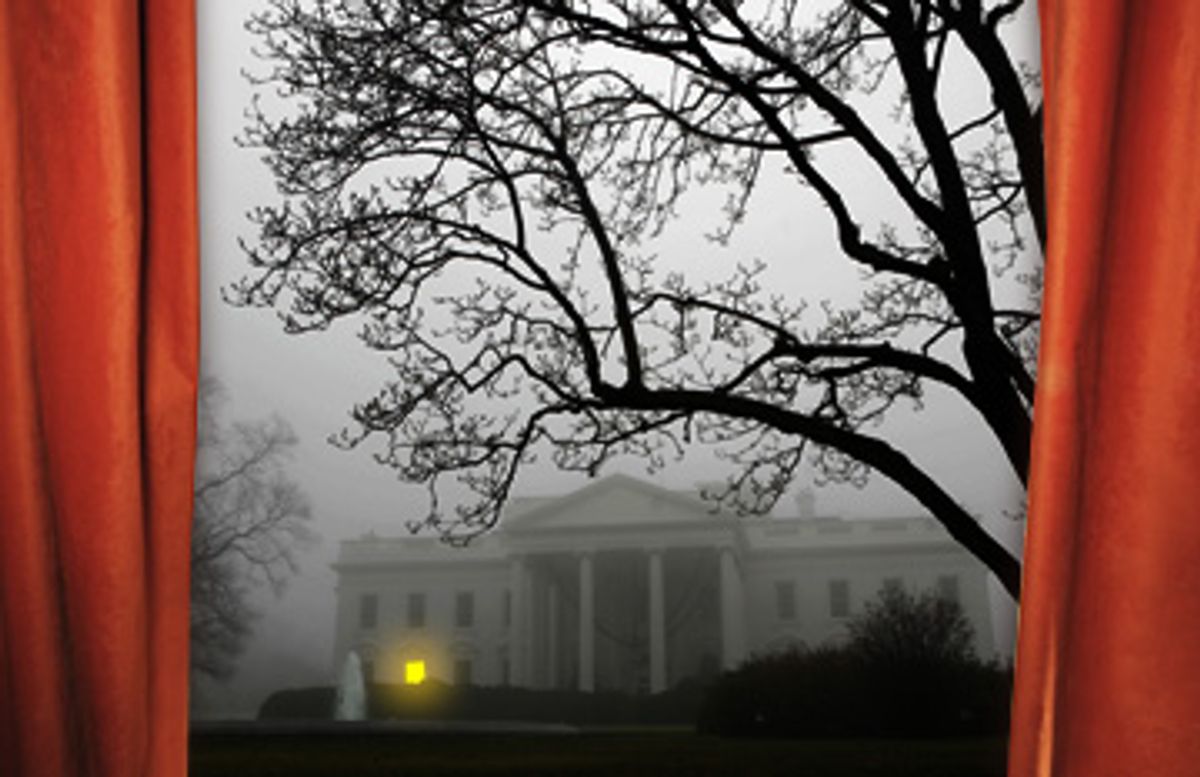 Scene: The presidential bunker, deep beneath the White House.

(As curtain rises, President Bushmills, President of Vice Chainsaw, Secretary of Hate Rice-Cakes, Presidential Brain Turdflower and General Approval are seen in the presidential bunker, eating breakfast. All are grimy and disheveled, with ripped clothes. Explosions and machine-gun fire can be heard in the distance.)

Bushmills: Yum, these little White Palace burgers are great. And you can eat so many of them!

Rice-Cakes: They are indeed delicious, Mr. President. It's an honor to eat them with you.

Rice-Cakes: Here you are, Mr. Chainsaw.

Chainsaw: That's Mr. Chainsaw, sir, Rice-Cakes. (Squirts ketchup all over his plate.) Ah, I love the smell of ketchup in the morning. It smells like ... victory.

Bushmills: You're right on the money there, Chainsaw! Winning rocks! Losing sucks! (muses) You know, I think that was one of my cheerleading yells back at dear old Yale. (To General Approval) Am I right, General Approval?

General Approval (robotically): 100 percent right, sir. Unconditional surrender. Mission accomplished. A stillness at Appomattox. Winston Churchill. Stay the course. An end to evil. Our generation's calling. Hand over your sword. So much to so few. Destiny. Courage. Victory. Woof!

Bushmills: I like the way you think, General Approval. Have another hamburger. Good boy.

Chainsaw: Aah, suck it up, Rice-Cakes! It's only a flesh wound. Nobody ever said defeating Evil was going to be easy.

Rice-Cakes (bleeding, collapses to ground): As a former Sovietologist clinging to an outmoded Cold War worldview, I couldn't agree more.

Chainsaw: That's more like it. Hell, that's nothing. That idiot who got in my line of fire on that hunting trip got it a lot worse than you.

Bushmills: Hey, Rice-a-roni, would you mind not bleeding on my freedom fries?

Bushmills: No problemo, Rice Queen. Hey, you ever notice that blood kinda looks like ketchup? Wow, guys, isn't being down here in this bunker while we win the war on terror GREAT? We get to eat takeout food every day, there are no press conferences, and the explosions are even cooler than in "Grand Theft Auto"! And every day they get louder and louder -- it's awesome! (Swaggers around, air boxing and singing) "We are the champions, no time for losers, 'cause we are the champions -- of the WO-O-O-RLD!"

Chainsaw (testily): Hey, Mr. President, if it doesn't put you out too much, sir, could you please ixnay on the Queen songs? I got a bad friggin' heart, capiche? You want me to keel over right here and now? (to himself) Christ, I still can't believe this guy's my boss.

Rice-Cakes (chirpily from floor): Well, everyone, it's 8 a.m., time for our morning meeting! Let's start with the situation in Iraq. General Agreement, your sycophantic assessment.

General Agreement: Victory is at hand. The commander in chief knows best. The enemy is on the run. American troops have never been defeated in battle. As they stand up, we will stand down.

Chainsaw: What about the Violence Committed by Al-Qaida Evildoers™? Is that getting better?

General Agreement: Well, sir, there are unquestionably some challenging trends there. At this stage, our intelligence indicates that with the exception of five blind paraplegic pacifist Bahais in an abandoned sanitarium outside of Mosul, every single Iraqi in the country is fighting every other Iraqi. Casualties are estimated at 5,000 an hour.

Bushmills: That's great news, General Agreement. If all those freedom-hating ragheads kill each other off, there won't be any terrorists left there! And we can bring our brave American troops home with honor!

Rice-Cakes: But General Agreement, isn't it also the case that all of the Iraqis are also all fighting us?

General Agreement (mumbling): Well, that is technically true. (louder) But as they stand up, we lie down. Then we shoot them and they fall down. Or they shoot us and we fall down. Or something.

Bushmills: Hmm. So they're all fighting us, too. That's tough. Boy, this is hard work, hard work, answering the moral call of our generation. (Presses fingers to temple, then suddenly cheers up.) But you know, that's why they're terrorists and we're not! And that's why I will not accept anything less than total victory! (To himself) Whew, that one had me worried for a minute there.

Rice-Cakes: All right, thank you for that report, General Agreement. Turdflower, why don't you catch us up on the domestic theater of operations?

Turdflower: Well, it's undeniably a less than optimal environment. As of this morning the president's approval rating is, let me see, .00000001. Extrapolating out from that, I estimate the defeatist, cut-and-run crowd's strength at 268,543,000.

Chainsaw: And our strength?

Bushmills: Cool! Can we put up that big Mission Accomplished banner and have me land on an aircraft carrier again, Turdflower? I just love wearing that pilot uniform.

Turdflower: Of course, Mr. President. We don't have any more Mission Accomplished banners, but they've been printing truckloads of them at the Death to the Great Satan factory in Tehran. I'll order one right away and have it translated from Farsi.

Rice-Cakes: What's happening on the Midwestern front, Turdflower? Did any of the remaining elite Republican Guard units manage to break out of the Iowa pocket?

Turdflower: Negative, Miss Rice-cakes. The last reports were that Field Marshall Scalia was seen heroically leading a picked band of patriotic diehards, beefed up with Opus Dei shock troops enraged by the cut-and-run crowd's war on Christmas. But all were ambushed and killed by Prius-driving insurgents outside of Des Moines.

Chainsaw: What about the Bushmills Fedayeen?

Turdflower: Again, a tactical setback. They were planning to drive their fleet of Humvees and Ford Expeditions adorned with "These colors don't run" bumper stickers into the middle of the enemy's ranks and detonate their payloads. But tragically, all of them ran out of gas before they could complete their mission.

Rice-Cakes: And the National Guard?

Turdflower: All Guard units are deployed in Operation Stop the Evil Busboy on the southern border. They won't be available.

Chainsaw: What about our domestic counter-insurgency campaigns? Isn't our universal phone-tapping plan yielding any recruits?

Turdflower: Unfortunately not, Miss Rice-cakes. Our preliminary research indicates that our phone-taps have uncovered zero al-Qaida connections, 234 calls to pizza delivery services that have gone out of business and, let me see, 14,345,346 adulterous affairs.

Turdflower: Yes, sir, but there's a problem. Apparently all 14,345,346 parties involved have gone over to the terrorist-coddlers in the reality-based community. Our intel people are struggling to understand why this is happening. They're calling it the "Me and Mrs. Jones" effect.

Chainsaw: What about the regular armed forces? Can we get some reinforcements? General Agreement?

General Agreement: Unfortunately, your regal Viceness, all Army, Air Force, Navy and Marine units are committed in War on TerrorTM operations in Afghanistan, Iraq, Iran, Uzbekistan, Kryghistan, Turkmenistan and We-heard-there-was-some-oil-here-istan. We have reactivated three divisions of head trauma, PTSD and multiple-amputation forces at Walter Reed, but there are logistical difficulties there.

Bushmills: OK. This has been an excellent meeting. Thanks for all your input. OK, we got a few problems to deal with, but hey, things didn't look so bright when we first went into Vietnam, either! Basically, the way I see it is, we're winning, and God loves me and wants America to win, and history will erect an enormous honkin' statue of me. The rest is just details.

Chainsaw (seizing shotgun and aiming it at Baker): Freeze, varmint! One more step and I'll take out years of barely repressed megalomania on you! What the hell are you doing here?

Baker: Sir, you've all got to get out now! The insurgents have breached the West Wing and are moving south! Even our Fox News shock troops have cut and run! We lost half our platoon fighting our way in here! You've got to head for the secret exit now! This is your last chance!

Bushmills: What are you doing barging in here like this? This is my personal bunker. I'm the decider, not you. This is totally unacceptable. (looks closely at Baker) And you know, pal, there's something else about you. There's something about your face I don't like. Something that reminds me of...MY DAD! Deal with this piece of human garbage, Chainsaw!

Chainsaw: With pleasure. There's only enough room in this bunker for one all-powerful consigliore, pal! (Blasts Baker and his men with shotgun. While Chainsaw is mowing them down, General Agreement and Turdflower hastily sneak out the back door.) I guess there's no "realism" to your graceful exit, Baker!

Bushmills: Good shootin', Chainsaw! And they said you were washed up. (yells offstage mockingly) Hey Dad! Sorry to waste your old buddy, Dadderino, but you know I only answer to a higher Father. (looks around) Hey, where'd General Agreement and Turdflower go?

Chainsaw: They're gone. Looks like they cut and ran. The yellow-livered curs.

Bushmills: Hey, don't worry about it, Chainsaw. There'll be all the more glory for us! It's just the three of us now, Chainsaw -- you, me, and Rice-cakes. Hey, Rice-cakes! You're gonna have a whole fleet of oil tankers named after you when we celebrate our great and glorious victory! Rice-cakes? (Looks down, sees that she is lying dead on floor.) Shoot, the terrorists got Rice-Cakes, Chainsaw. It looks like it's just you and me.

Chainsaw: (still holding shotgun): Yes, you and me, Sonny Boy. You and me. (pause) Actually, you know, Sonny Boy, there's something that's been on my mind. Why should you get all the glory? You know you're just a pathetic little punk. Without me and Rumsoaked you never could have pulled any of this off.

Bushmills: Now, Chainsaw, I've always given you full credit. I grant that you're a really scary and manipulative ghoul, but let's not get carried away.

Chainsaw (ignoring him): I've sweated blood for you, Bushmills. When others treated you like the idiot prince regent that you are, I was a second father to you. An angry, distant, authoritarian father who allowed you to rebel against your own dad by becoming even more reactionary than he was. I helped you grow up, Bushmills -- into the resentful, smug, deeply devout, dry-drunk teenager that you are today.

Bushmills: Chainsaw! What's gotten into you? Put the gun down, Chainsaw.

Chainsaw: And now that I've finally realized my dream of engineering an apocalypse that will take the entire country down in a blaze of righteous glory just as my heart gives out, what thanks do I get for it?

Bushmills (trying to laugh it off): Chainsaw, buddy, you slay me with your practical jokes! You really had me going there for a minute.

Chainsaw (raising shotgun): And you know, Bushmills, lately even you have been getting a little wobbly. A little soft on terror. And in this epochal struggle, Bushmills, there's no place for appeasers.

Bushmills: No, Chainsaw! No! Not when victory is within my grasp!

Chainsaw: Sorry, Sonny Boy. We can argue about right and wrong all day. But like I've always told you, it's all about who's holding the gun. (Chainsaw blasts Bushmills. Then he picks up phone.) Hello, Snow Job? Chainsaw here. Listen, I've had another hunting accident. Round up the usual suspects.

(Chainsaw sits down, still holding gun. He looks out at audience with a cold little smile. Explosions get louder as the stage slowly fades to black).