The other Israel lobby 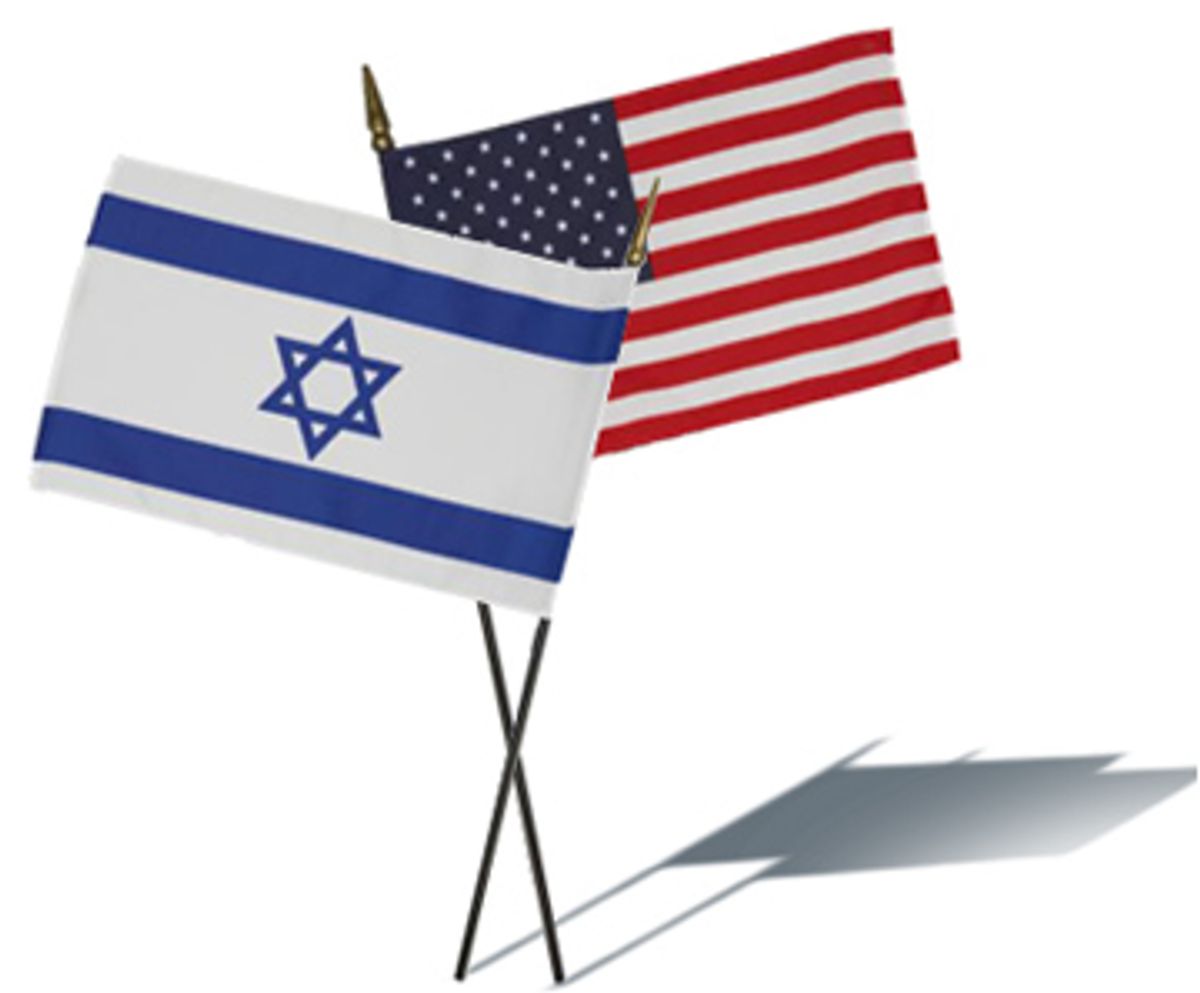 This past June, on my last day working as a speechwriter for the Israeli government -- first at the United Nations and then in the prime minister's office -- I met with Prime Minister Ehud Olmert in his private office at the Israeli parliament to discuss a speech he had just given to the U.S. Congress. The speech, which I helped write, was largely about the future of U.S.-Israeli relations, and we discussed how it had gone over. Also at the meeting was a high-ranking official in the Israeli Foreign Ministry, and when we left the building together, he told me that the next day officials from the American Israel Public Affairs Committee, the powerful lobbying group, would be visiting. He asked if I had any suggestions about what to tell them about how they could more effectively help Israel in Washington.

"Some people would say that maybe the best thing would be for them not to be so reflexively pro-Israel on every issue," I said.

He laughed. "Well, I don't think that's going to happen anytime soon," he said. I suggested that such a rebalancing might be beneficial for all who were interested in supporting Israel, and he conceded that, yes, "just maybe" it would.

Many American Jews, it seems, have similar feelings. Eighty-seven percent of them voted Democratic in the recent midterms -- the highest number since 1994 -- belying the oft-repeated claim that the Bush administration's staunch support for Israel would move the traditionally Democratic Jewish vote toward the Republicans. The fact is that most American Jews, and many other American supporters of Israel, do not see eye-to-eye on the Israeli-Palestinian conflict with the most hawkish, knee-jerk Israel supporters in the U.S. government -- even if their presumed leadership, represented by AIPAC, often appears to do so. Moreover, AIPAC's influence in Washington may soon begin to decline, as a powerful new alliance of left-leaning friends of Israel has begun to emerge, with the express aim of reshaping U.S. strategy on the region's most intractable problem.

If the Bush administration decides to seriously reevaluate its strategy in the Middle East in the wake of the Iraq Study Group's recent report -- and among its recommendations is prioritizing a solution to the Israeli-Palestinian conflict -- it will have to deal with a minefield of interest groups. That will surely include AIPAC, a juggernaut that the New York Times has called the "most important organization affecting America's relationship with Israel."

In "The Israel Lobby," their highly controversial article earlier this year, Stephen Walt and John Mearsheimer argued that AIPAC, along with a very wide array of allies, pushes American foreign policy inflexibly in a pro-Israel direction. The article was criticized as simplistic, sloppy and above all reductive, but in its core suggestion that AIPAC often hinders the American government's ability to freely maneuver in the Middle East, it is difficult to argue with. As AIPAC itself proudly reports, the organization is "consistently ranked as the most influential foreign policy lobbying organization on Capitol Hill," and it uses this influence to very successfully push a viewpoint that its critics claim puts Israel's total military dominance above efforts to broker Middle East peace.

AIPAC suffered a relatively small but symbolic defeat this past year -- one that may prove to have been a turning point. Earlier in the year, AIPAC put all its muscle behind a congressional bill called the Palestinian Anti-Terrorism Act, which even some pro-Israel observers called "draconian." Going beyond even the Bush administration's own hard-line stance on the Hamas-led Palestinian government, it would have essentially cut off all American contact with any element of the Palestinian leadership, and hampered the U.S. government's ability to strengthen Palestinian moderates.

A group of small, left-leaning Jewish lobby groups, including the Israel Policy Forum, the Jewish Alliance for Justice and Peace and the Religious Action Center of Reform Judaism, banded together to battle AIPAC on the issue, and in the end were successful. A watered-down version of the bill was passed, with what they saw as the problematic language stripped away. An AIPAC official recently told me that AIPAC was satisfied with the softer bill's passage -- but it is quite clear that the incident represented a defeat for the organization.

It was, in fact, an impressive demonstration of what political cooperation and grass-roots advocacy can do. However, for these groups to replicate that success on a larger scale and with more of a substantive effect on U.S. foreign policy, there is a key missing element: real money.

That is where billionaire financier George Soros may come in, along with a group of other left-leaning philanthropists, many of them Jewish. In the relatively close-knit Middle East lobbying community, it is something of an open secret that this past September, Morton Halperin, who served in both the Nixon and Clinton administrations and is now director of U.S. advocacy for Soros' Open Society Institute, met with a group of lobbyists, political strategists and former politicians who are seeking to create a new well-funded, well-organized, left-leaning Israel lobby, as an alternative to AIPAC.

Several key figures in this group had been active in the effort to quash the Palestinian Anti-Terrorism Act, and include Jeremy Ben-Ami, a former advisor to President Clinton, and Daniel Levy, a former special advisor to Israeli Prime Minister Ehud Barak and now a senior fellow at the New America Foundation in Washington.

The group's first meeting was exploratory and unfocused, according to several attendees who spoke with me. But in late October, Soros himself attended a follow-up meeting, along with liquor magnates Edgar and Charles Bronfman, former Democratic Rep. Mel Levine and others. The idea -- by this point labeled the "Soros Initiative" -- now began to gain traction and substance, with large sums of money being pledged by several parties. Several people involved have told me that there is now almost enough money firmly on the table to launch the new organization -- an eight-figure dollar amount, they say, and that's just for starters. Several people have told me that there is already work in progress to establish the organization's core structure and operations.

What exactly would the new organization do? According to Diane Balser, a board member of the Jewish Alliance for Justice and Peace, one of the small left-wing groups involved in the discussions, the goal is clear: "Organizing systematically to affect U.S. foreign policy." Levy, the former Barak advisor, explained that the movement is "coming from a place where inside the mainstream Jewish community, people are increasingly confused about something that describes itself as pro-Israel, but is so out of sync with what they believe are good politics for the U.S. or Israel."

"The right-wing orientation in the community is losing people by the droves, particularly young people," M.J. Rosenberg of the Israel Policy Forum, one of the main groups involved, added. "Most U.S. Jews support peace in the Middle East, and don't want to shoot down doves anytime they appear."

The point of the initiative, Levy told me, is not to "turn American policy against Israel. It is to reach out to groups of philanthropists to get better resources and better focus and to translate this into a political statement," so that members of Congress will know that they "will have cover if they seek to do what we and many in the American Jewish Community think is right."

There has been talk before about establishing an alternative to the status quo represented by AIPAC, but the added element of money from Soros and others could prove the pivotal difference now. There is also the possibility that a connection to Soros could itself be problematic. Soros has never been at all friendly to Israel, and his involvement might scare off others who are left-leaning but still support Israel. He is also one of the major funders of MoveOn.org and other left-wing causes, and Republican lawmakers, and even some centrist Democrats, may not want to be associated with him. An AIPAC insider repeatedly stressed to me that one reason this new group will never be able to compete with AIPAC is because AIPAC is bipartisan, while what he called the "Soros connection" shows that the new group will not be.

Levy, meanwhile, said that it is "a misnomer" even to call it the "Soros Initiative," because, as one of his allies said, it's not "Soros' baby. He doesn't want to be out front on it."

The AIPAC insider said that he believes the "Soros Initiative" is little more than a fundraising drive to raise money for some impoverished organizations that "have to define themselves in opposition to something." In fact, say those involved, a contentious issue in the discussions is exactly how much the new organization would allow itself to be seen as being in direct opposition to AIPAC. At least four of the players involved have told me that they intend to be an "alternative," but not an "opposition." Still, one of those present at the early meetings said that he sees his organization as "the anti-AIPAC." Levy, meanwhile, said simply that if "there are differences in policy, those will be expressed in one group advocating one thing and another advocating another thing." This would at least be an improvement, he said, over the past, when Israeli leaders who honestly sought to make peace "pulled their hair out because of the lack of support from the Jewish community in the United States."

I can attest from personal experience that Levy likely picked up this sense of frustration from working in the Israeli government. Once, when I was still a speechwriter for the Israeli government at the U.N., I sat in on a meeting with a group of right-leaning American Jewish lobbyists who were discussing how harshly to react to the International Court of Justice's ruling that Israel's separation barrier was illegal.