The angry anthem at the heart of the musical has its very own cult following. 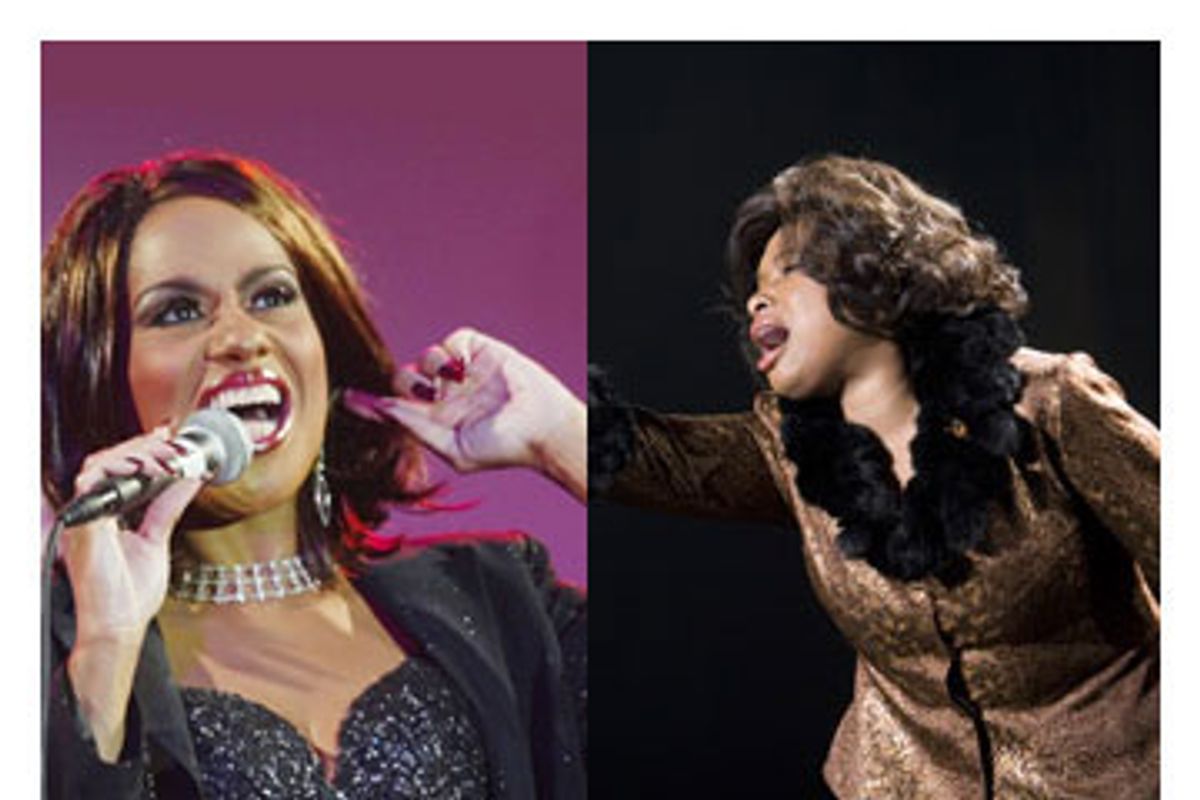 While reaction to "Dreamgirls" has been mixed, the one thing critics seem to agree on is Jennifer Hudson's assault on the musical's anthem-of-the-scorned, "And I Am Telling You I'm Not Going." The New York Times says Hudson's performance carries the "goose-bumped thrill of witnessing something new, even historic." The San Francisco Chronicle dubbed the performance "one of the most exhilarating scenes in this year's cinema." Rolling Stone simply called it "revelatory."

Hudson's version of the song is a big part of why the "American Idol" also-ran has some serious Oscar hype, but her performance also stirs up memories of another Jennifer -- one who also came out of nowhere and rode the song to stardom. Jennifer Holliday was the first Effie, and her performance in Michael Bennett's original production of "Dreamgirls," is a part of Broadway lore and launched the careers of a thousand drag queens. It also anticipated much of the same praise and criticism being levied at the new "Dreamgirls."

In his 1981 New York Times review of "Dreamgirls," Frank Rich singled out Holliday's work on "And I Am Telling You," calling it "one of the most powerful theatrical coups to be found in a Broadway musical since Ethel Merman sang 'Everything's Coming Up Roses'" in 1959's "Gypsy." Looking back, Rich points out that Holliday's personal history -- the then 21-year-old native of Riverside, Texas, had only had one major Broadway role before "Dreamgirls" -- was a key factor in the legend of the performance.

"In theatrical terms, no one had ever heard of her," says Rich. "To see an unknown performer close the first act of a big Broadway musical with such an emotional, well-sung star turn will almost inevitably cause a sensation on Broadway."

And cause a sensation it did. Holliday earned a Tony for the role, and it was on the 1982 award-show telecast that she delivered a ferocious performance (you can watch it here) that left audience members' mouths agape, and which further burnished her legend.

"The passion she put into that song was like an act of God," says Billy Zavelson, a producer on "The Lieutenant of Inishmore" and "Kiki and Herb: Alive on Broadway." "Everyone who cares about musical theater knows that performance."

Holliday followed up her Broadway success by cutting "And I Am Telling You" as an R&B record -- which became a chart hit and won a Grammy. The song also gained Holliday a legion of fans in the gay community, who latched on to the almost unbearable level of emotion she imbued it with, as well as its lyrical message of defiance in the face of heartbreak.

"That type of song has always resonated with gay audiences. It tapped into everyone's fears of abandonment," says Michael Musto, longtime Village Voice gossip columnist, and who used to lip-sync to Holliday's version of the song as the finale to the sets he played with his band the Musts. "[Holliday] was acting out every degrading humiliation and every uncouth reaction we all want to do when we're dumped but don't -- because we have to face people the next day."

Holliday's performance, shepherded along by Bennett's innovative direction, also struck a chord with gay listeners because it showed the singer doing what many of them could not do: Holliday was unabashedly expressing herself. "If you were ever afraid of who you were, or were never able to fit in, you're going to respond to that type of commitment," says Zavelson. "Putting yourself out there 100 percent -- it's not easy to do."

But while Holliday's over-the-top theatrics drew her a legion of fans, they earned their share of detractors, too. "The song works dramatically, but taken outside of the context of the musical it seemed overwrought in a way that Aretha Franklin and Gladys Knight never were," says Nelson George, the author of "Where Did Our Love Go: The Rise and Fall of the Motown Sound" and "The Death of Rhythm and Blues." George also contends that the show's music -- meant to mirror the sound of one of black popular culture's greatest periods, roughly the mid-1960s to the early '80s -- never quite transcends pastiche. "When you hear the music in the play and the film, you're hearing the echoes of Motown, of the Supremes, of James Brown and Wilson Pickett," he says. "But the music, including 'And I Am Telling You,' never sounds like more than an imitation."

And even though Holliday regularly brought the house down during her nearly four-year run as Effie, not everyone in the audience leapt to their feet. "I thought she went way over-the-top on that number," says David Barbour, a writer for Broadway.com and editor in chief of Lighting & Sound, a trade journal for the entertainment technology industry. "What you're really looking at with that performance is the greatness of Michael Bennett." Bennett, who died of complications from AIDS in 1987, directed the show and, with Michael Peters, did the choreography, for which he won a Tony.

"The entire show was framed so well and the story structure was so strong -- with the way the whole first act builds toward 'And I Am Telling You' -- it's almost impossible not to get a great reaction," Barbour says. Besides, he adds, "Where are the other great Jennifer Holliday performances?"

While Holliday had a busy career after "Dreamgirls," charting with the occasional R&B song, making guest appearances on TV shows like "Touched by an Angel" and "Ally McBeal," and performing regularly at gay-themed events and fundraisers, she never again reached the heights of "And I Am Telling You."

"She pigeonholed herself," says Zavelson. "She wasn't able to do anything where she wasn't the standout."

Rich puts it more simply: "That performance outlasted her career."

Holliday was back in the news when she publicly complained about her lack of involvement in the new "Dreamgirls." Maybe the filmmakers instinctively knew what audiences are just finding out -- Effie doesn't belong to Jennifer Holliday anymore.

"Jennifer Holliday owned that role. It was like Marlon Brando and Stanley Kowalski," says Musto. "But Jennifer Hudson did a great job. Maybe it'll be her role now."