Don't look now but New Hampshire may be casting a blue shadow over the '08 presidential race. 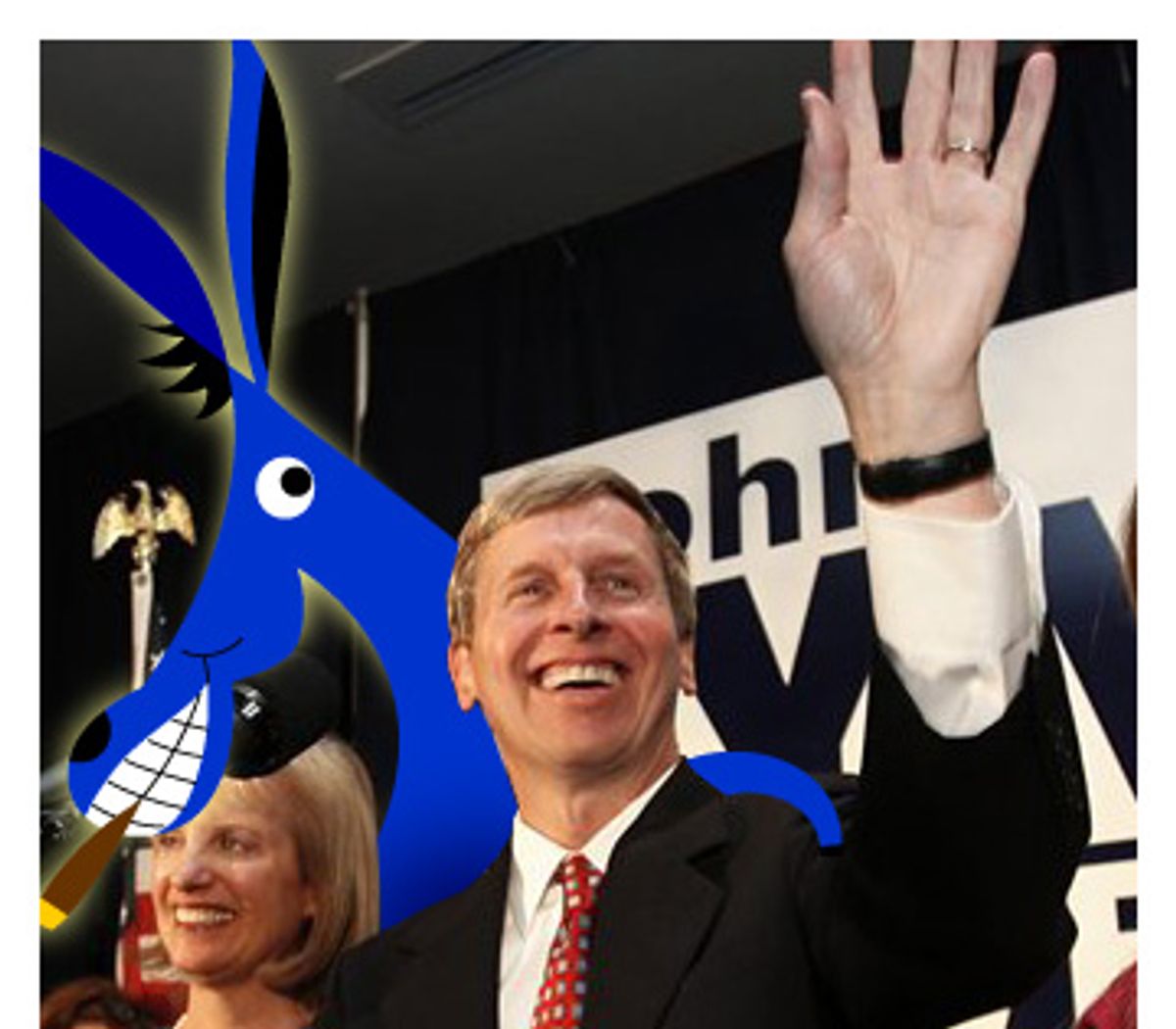 You do not pass many Democrats on the way to John Lynch's office, just long corridors of stern portraits of prior New Hampshire governors, each an enduring testament to the state's rock-ribbed Republican past.

But the mild-mannered Lynch, a businessman turned politician, is presiding over the most dramatic revival of the Democratic Party anywhere. The governor's secret weapons are pragmatism, moderation and amiability, a three-part formula unlikely to appeal to the go-for-the-jugular partisans who demand that the Democrats ape Republican tactics. As Lynch put it, "I really go out of my way to be bipartisan in my approach involving Republicans and Democrats. I just try to put partisan politics aside and focus on the issues."

Yet it is difficult to argue with the results. Not only did Lynch coast to reelection for a second two-year term last month with a record-smashing 74 percent of the vote, but the governor swept in with him virtually every Democrat in the state who does not have to report to a parole officer. In fact, when I interviewed Lynch last week, he had just returned from a farewell lunch for the defeated Peter Spaulding, a widely respected Republican member of the state Executive Council. Spaulding was upended by a septuagenarian Democrat so casual about his political prospects that he was vacationing in Belgium on Election Day.

The Democrats had been favored to win back the state Senate (which they last controlled in 1998), but no one anticipated they would also pick up 80 seats to give them a majority in the sprawling 400-member state House for the first time since 1922. And, yes, the state's two congressional seats also flipped from Republican to Democratic. Victorious were Paul Hodes (who won just 38 percent of the vote in his first try in 2004) and Carol Shea-Porter, who ran an aggressive grass-roots campaign to compensate for raising less money than any successful congressional challenger in the nation.

State Democratic Party chairwoman Kathy Sullivan likened the November upheaval to another recent seismic event that transformed the landscape of New England. "It was like the Red Sox winning the World Series," she said. "Growing up in New Hampshire as a Red Sox fan and a Democrat, you felt doubly cursed. Now it's a month after the election and it's still incredible."

What has been going on in New Hampshire? And do the fast-shifting politics of this traditionally Republican state presage a larger Northeastern realignment?

Lynch freely acknowledged the role that national issues played in turning economically booming New Hampshire, at least temporarily, into a blue-state bastion. "There was certainly a lot of frustration with the White House, with the policy in Iraq, with the divisiveness and bickering," he said. Proudly citing polls that show that roughly 80 percent of voters believe that the state is on the right track, Lynch said, "People concluded that Washington just didn't work and New Hampshire was working."

Most gubernatorial landslides do not bring about a transformation of state politics. In Connecticut last month, moderate Republican incumbent Jodi Rell swept to a 63 percent victory in the governor's race, while at the same time the Democrats maintained a two-to-one margin in both houses of the state Legislature and picked up two congressional seats.

Several unique-to-New Hampshire factors magnified the extent of the Democratic triumph. The state still retains old-fashioned straight-ticket voting, a one-step option for party loyalty that the Republicans have protected against Democratic protests. This time around it boomeranged, with the straight-ticket voters (more than one-third of the electorate) going Democratic by a lopsided margin of 83,000 to 59,000. New Hampshire has numerous multimember state House districts, a form of gerrymandering that also encourages voters to opt for the candidates of a single party.

Then there were the aftershocks from the phone-jamming scandal, in which two GOP operatives eventually went to prison and the state party had to pay civil damages because of their illegal scheme to disrupt Democratic Party communications on Election Day 2002. As Sullivan said with evident satisfaction, "The Republican state party was bankrupt and their morale was horrible. And it was all because of the phone-jamming case, which was all their fault."

None of these local factors should minimize the larger message of the 2006 election: Old-fashioned Yankee Republicans now exist only in Norman Rockwell paintings and Pepperidge Farm commercials. Dante Scala, a political scientist at Saint Anselm College, sees the roots of New Hampshire's political transformation dating all the way back to 1964, the year when the Republicans spurned the Northeastern wing of the party to nominate conservative Barry Goldwater. "They went with the South and the West," Scala said, "and they wrote off the Yankee Republicans."

Perhaps the largest factor, though, is demographic change. New Hampshire has shed its played-out mill-town heritage and emerged with little fanfare as the fastest growing and most prosperous state in New England, with a median family income of more than $57,000. Pollster Andy Smith, who directs the Survey Center at the University of New Hampshire, stresses that high-income and highly educated voters these days are likely to vote Democratic. "My guess is that in five to ten years," he said, "New Hampshire will be a consistently Democratic state like the rest of New England."

With an upper-income workforce flocking north to take jobs in New Hampshire's expanding financial-services sector and network of hospitals, the angry undertones of class-warfare politics are apt to be missing from the 2008 presidential primaries in both parties. (Remember, this is a state that chose Pat Buchanan in the 1996 Republican primary.) What will be intriguing is watching Republicans like John McCain and outgoing Massachusetts Gov. Mitt Romney tack right to win the support of evangelical voters in early states like Iowa and South Carolina and then have to justify their socially conservative positions to the secular voters of New Hampshire.

But from the politicians to the political science community, no one believes that state politics in New Hampshire will be as lopsided in 2008 as they were this year. Smith theorized, "The pendulum will swing back, but I don't know how much."

Lynch, who was executive director of the state Democratic Party 30 years ago before he launched his business career, recalled the heady days of 1976 when the Democrats came close to winning a majority with more than 180 votes in the state House: "Nobody thought back then that number of Democrats would ever be exceeded." And nobody imagined that a Democrat would ever be reelected governor with 74 percent of the vote in a state like New Hampshire.