Disillusionment with war is an overlooked psychological liability on the battlefield, experts say -- and could lead to higher rates of PTSD among U.S. soldiers in Iraq. 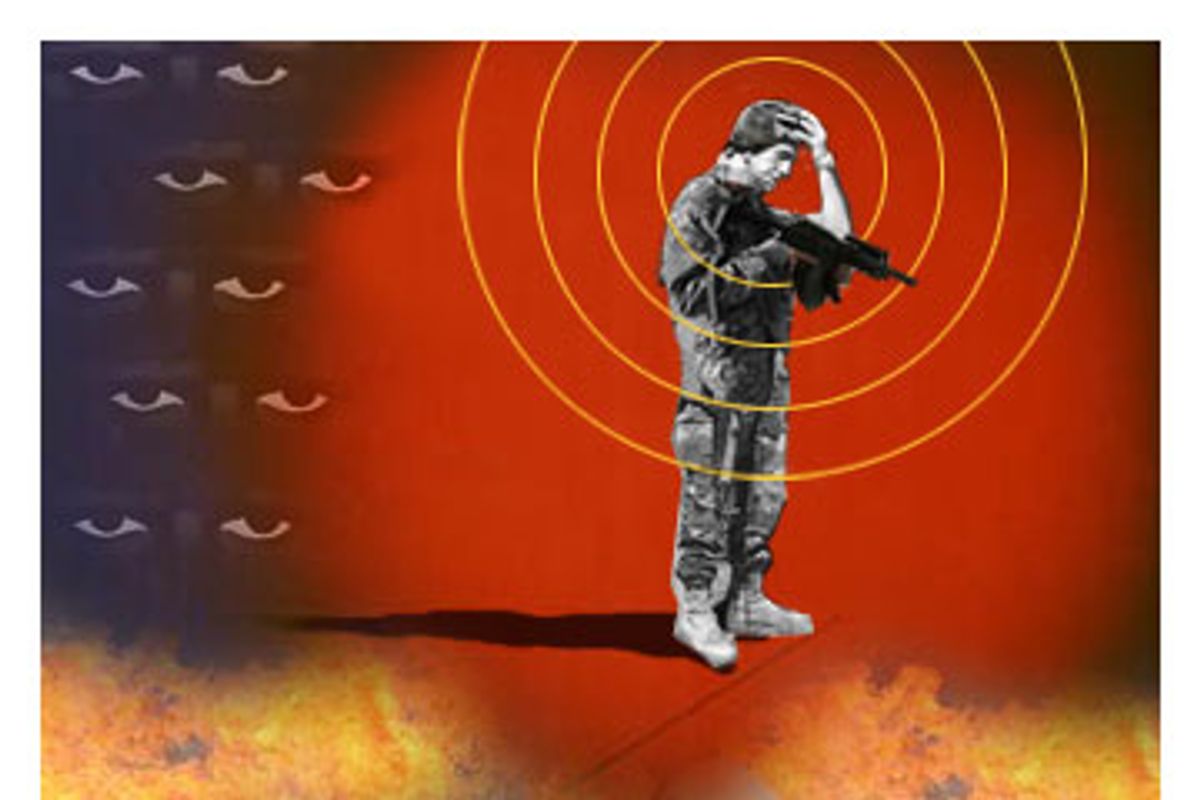 Corey Davis, a machine gunner with the Army's 2nd Infantry Division, has a simple description of what was expected of him during his yearlong tour of duty in Iraq.

"Pretty much," said Davis, who was assigned to protect a road used as a supply route, "our job was to get fired at or have IEDs [improvised explosive devices] blow up on us."

Davis left the Army in October and has been diagnosed with post-traumatic stress disorder, or PTSD. Since he returned to the States in August 2006, he has been troubled by thoughts about the futility of day-to-day tactics in Iraq, where several of his friends died. "This was just for us to make the route secure. You would think a human being would be more valuable than a supply route ... What the hell did we do all that for?"

A lot more soldiers may soon be asking similar questions. This week, even as former Secretary of State Colin Powell lamented that "the active Army is about broken" from repeated combat tours, President Bush announced that he is thinking about sending as many as 30,000 more troops to Iraq. Nearly simultaneously, the Army released a study that suggests that those troops who have served more than one tour of duty -- true of a large percentage of all military personnel -- are 50 percent more likely to suffer from acute combat stress, a possible precursor to PTSD.

According to experts contacted by Salon, however, there is another overlooked risk factor likely to lead to a high rate of PTSD among those troops already in Iraq or yet to be "surged" there. As the U.S. mission in Iraq has morphed from overthrowing Saddam into a vague cross between nation building and refereeing a civil war, returning soldiers like Davis express a growing disenchantment with that mission. Questioning the mission is a psychological liability on the battlefield -- and such disillusionment means that American soldiers in Iraq are at greater risk of developing PTSD.

In a series of interviews, some of the nation's experts on psychological injuries pointed to a little-known and rarely studied connection between demoralization and exacerbated mental trauma from war, which can include a diagnosis of PTSD. Another Army study earlier this year showed that an alarming 35 percent of Iraq veterans sought help in military facilities for mental problems in the first year after their return. Experts think that the deteriorating sense of mission could worsen the incidence of PTSD and exacerbate its symptoms.

There is remarkable unanimity among experts on the issue, largely based on their experiences treating veterans. "When people have grave doubts about whether it was all worthwhile, it may make their psychological problems worse," explained Dr. Arthur S. Blank Jr., who helped pioneer the diagnosis of PTSD after the Vietnam War. Even those who question the pervasiveness of PTSD accept the connection between mental health and a belief in the military's mission. Sally Satel, a psychiatrist and resident scholar at the conservative American Enterprise Institute, has drawn fire from veterans' groups and some of her medical colleagues for claiming that PTSD might not be as widespread as some data suggests. But on the connection between disillusionment and PTSD, Satel and her peers agree. "Demoralization, or the difficulty of making meaning of a task, is one of the risk factors," Satel confirmed in an interview.

PTSD in veterans is a delayed response to the trauma that occurs when the brain's normal processing functions are overwhelmed by the extreme images and experiences of war. "Think of PTSD as a processing deficiency disorder," explained Blank, who for 12 years ran a network of government centers that treated a half million veterans with PTSD. "The mind and the brain are overwhelmed by the experiences, and they get registered inside in odd ways."

The improperly encoded data can haunt veterans for the rest of their lives, disrupting sleep patterns and altering mood and personality, even tinkering with the central nervous system. Veterans with PTSD sometimes have a hypersensitive startle reflex. Researchers are now examining a slate of physical "biomarkers" -- such as long-term physiological changes in the brain and alterations in brain structure -- that suggest a biological basis for PTSD.

On the battlefield, a strong sense of commitment can act as mental insulation from the stress that causes PTSD. "Some sense of conviction about what one is doing can be psychologically useful," said author and psychiatrist Robert Jay Lifton. The absence of conviction, on the other hand, "makes it more difficult to take in the death or inwardly justify the very extreme kind of trauma you are going through."

Once a soldier has returned home, an enduring belief in the mission helps the brain think about what happened and file it away properly. Without a strong commitment, images are more likely to remain improperly processed and return as flashbacks, one of the hallmarks of PTSD.

PTSD became an official disorder only in 1980, when it was first included in the American Psychiatric Association's "Diagnostic and Statistical Manual of Mental Disorders." There is limited data on mental trauma from Korea and World War II. The Vietnam War -- a war that resembles Iraq in many ways, including the duration of the conflict and the ambivalence of its combatants -- is the first conflict for which extensive PTSD data is available. By the time of a 1988 survey, 31 percent of Vietnam veterans reported experiencing symptoms of PTSD at some point after their combat duty.

Among the soldiers who have fought in Iraq, "disillusionment" often refers to nuts-and-bolts concerns about the way the war is being conducted on a day-to-day basis. Some soldiers, like Davis, describe the Sisyphean quality of endlessly repeated vehicle patrols through the same Iraqi neighborhoods, punctuated by unpredictable, violent attacks, with no productive results. The lack of progress on the ground is bad news for the mental health of troops, according to psychiatrist Jonathan Shay, the author of "Odysseus in America: Combat Trauma and the Trials of Homecoming" and an advisor to the Army on personnel issues. "The soldier in a fight needs to know that his direct leaders and his direct leaders' bosses know what they are doing and are doing something really, truly worthwhile when they send them into these situations."

In another echo of America's other recent protracted war, endlessly repeated patrols are themselves a PTSD risk factor. In Iraq, the soldiers are making the rounds in vehicles, and death comes from roadside bombs. Decades earlier in Vietnam, they patrolled on foot through ambushes and booby traps. In both wars, the troops were there to draw fire. They were as likely to feel like the hunted as to feel like hunters, leading to combat stress and PTSD. "It's not new for American soldiers to feel like sitting ducks," Lifton says. He calls what the troops experience on patrol "the psychology of helplessness."

When the troops return home, they share something else with their Vietnam-era predecessors. Researchers agree that what they call a "lack of social support" from family, friends and community upon a soldier's discharge is considered a risk factor for the development of PTSD. After Vietnam, many veterans felt spurned by the American public. While there is no shortage of "Support Our Troops" bumper stickers nowadays, troops returning from Iraq report feeling disoriented and isolated by an American public that seems detached from, even uninterested in, the wrenching experience of the grunt in Iraq. That kind of culture shock, Shay said, is "often experienced like a kick in the stomach."

To date, the government has shown no indication that it wants to study the psychological impact on soldiers of mission drift and disillusionment. There may be, as Shay put it, "a strong sense among veterans and the people who work with them that meaning is a crucial issue," but the federal government has tended to shy away from looking at it. Blank, for one, thinks that's due to political considerations.

Despite nearly a week of phone calls and e-mails, Army medical officials failed to make anyone available to Salon to discuss the issue. Ira Katz, deputy chief patient care services officer for mental health at the Department of Veterans Affairs, did speak with Salon. Not surprisingly, he seemed much more circumspect than the nongovernmental experts about any relationship between disenchantment and mental wounds. He emphasized that such a correlation has not been thoroughly studied. "I don't think it is proven," Katz said. He then suggested that it might not even be worth studying. "Why does it matter? ... Our job is to treat suffering and impairment." (The outside experts also argue that discussing serious disenchantment with PTSD-afflicted veterans should be an important part of their therapy. Katz disagreed.)

The government's attitude toward exploring a soldier's sense of purpose as part of PTSD research was apparent as long ago as 1988. That year, the landmark survey of PTSD known as the National Vietnam Veterans Readjustment Study produced the estimate that 31 percent of the veterans will show signs of PTSD at some point in their lifetime. (A controversial reanalysis of the data earlier this year revised the figure downward to about 20 percent.) Part of the study included responses from thousands of Vietnam veterans to a questionnaire.

Blank, who ran the network of V.A. treatment centers, worked on that study and oversaw the development of the questionnaire. But because the study was conducted with federal funds, the questions had to be vetted by the White House Office of Management and Budget. More than a decade after the last combat death in Vietnam, the Reagan administration apparently still balked at questions that had to do with disillusionment. The OMB removed them from the questionnaire. "The government is reluctant to study this factor," Blank said.

But there may be less politically charged reasons for the lack of information. "Part of it," Shay said, "might have been that if we ask these questions, it might make somebody look bad." Yet he also noted that mental states are difficulty to quantify. You can count, say, the number of people a soldier believes he killed. But how do you measure disillusionment? In a scientific study, Shay noted, there is "a constant suction toward measurability" and away from topics that seem too squishy to quantify.

Meanwhile, in Iraq, the military's top brass is considering some major tactical changes. The focus on combating insurgents and deploying repetitive vehicle patrols may shift to supporting Iraqi troops and hunting terrorists. Perhaps new strategies and tactics will result in a renewed sense of mission among the troops -- and any new strategies and tactics could help the troops who may soon be headed to Iraq. They come too late, however, to make much difference to the thousands of soldiers who have already served in Iraq and are now wrestling with what was asked of them.