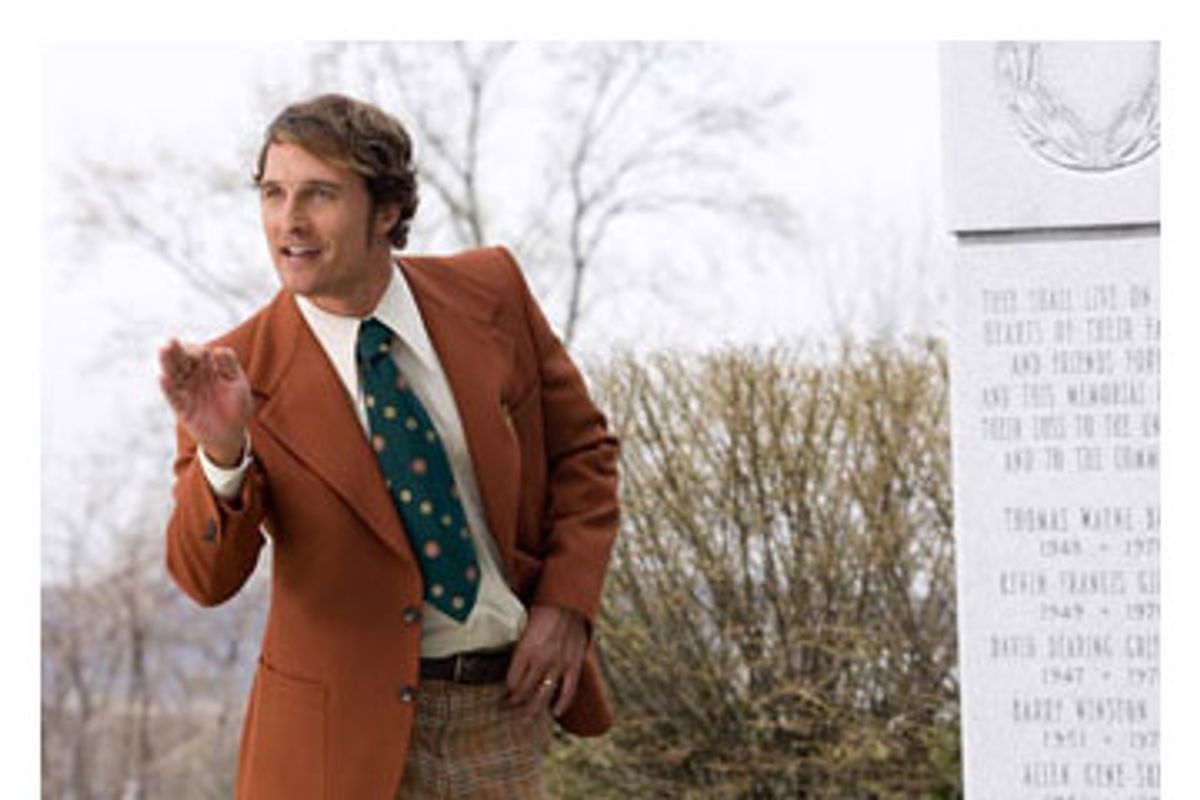 "We Are Marshall" is based on the aftermath of the 1970 plane crash that took the lives of more than 70 members and fans of the Marshall University football team. The college town of Huntington, W.Va., was understandably devastated; a new coach, Jack Lengyel, rebuilt the team and brought the town back to life.

You shouldn't have to squeeze hard to get a good movie out of a story like that. But McG, director of "We Are Marshall," drags out the emotional juicer in the opening scene, and from there, the spent lemons pile up with alarming speed. Every moment leading up to the crash is loaded with portent: A team member named Chris and his cheerleader fiancée (played by Wes Brown and Kate Mara) hug and kiss just before he's about to board the doomed flight. "I'll see you in a couple of hours, right?" she tells him, and the words hang in the air like an ad slogan winding its way around a dirigible. The plane goes down (the scene -- a sudden jolt of the camera and an abrupt cut to a black screen -- is one of the few McG handles deftly). Later, the memorial services and funerals cause many tears, and several voice-overs. At Chris' burial, two of his surviving teammates drape his jersey lovingly over the gleaming mahogany casket -- we get a special overhead shot of this -- proving that art direction can triumph over death.

The town feels terrible, of course. Chris' dad, the town bigwig (played by Ian McShane, who works his way valiantly through some stinkeroo dialogue), can't deal with his grief; the university's president (David Strathairn, another fine actor who paddles hard to keep afloat) considers closing down the football program. And then, like Mighty Mouse come to save the day, Matthew McConaughey's Lengyal swoops in, becoming the wind beneath the town's wings.

McConaughey, kitted out in a variety of drip-dry sport coats and plaid Sansabelts, is supposed to be playing a savior, but he looks and acts like a salesman you'd never trust: His affability is the wooden-nickel kind; his tendency to speak out of only one side of his mouth makes him look like a walking smirk.

Still, the townspeople put their trust in him. With a script like this (it's by Jamie Linden, from a story by Linden and Cory Helms), what choice do they have? In "We Are Marshall," characters don't talk, they orate: "From the ashes, we rose." "See what's going on out there? That's all because you never stopped pushing." "Grief is messy, Annie. Makes you do things you regret." The score, by Christophe Beck, is sensitive like a bruise, when it's not swollen like a blood blister.

And all the while, McG keeps the emotional pitch high and the subtlety quotient low. Crises and triumphs pile up; guys fight, and then make up with sensitive, he-man hugs. There are so many emotions in "We Are Marshall" that there's hardly any room for football -- and when we finally get some, even that's clogged with excess feeling. (The pivotal moment in the big game is chopped up and intercut with a flashback summary of everything that has come before, just in case we forgot where we came in.) "We Are Marshall" is supposed to be about a town recovering from sorrow and reclaiming its dignity, but a movie in which mass death causes each character to start spouting like a motivational speaker really shouldn't be preaching to anyone about dignity.