Despite their vote of confidence in Democrats this November, voters doubt Congress' ability to lead. Swift reforms could prove them wrong. 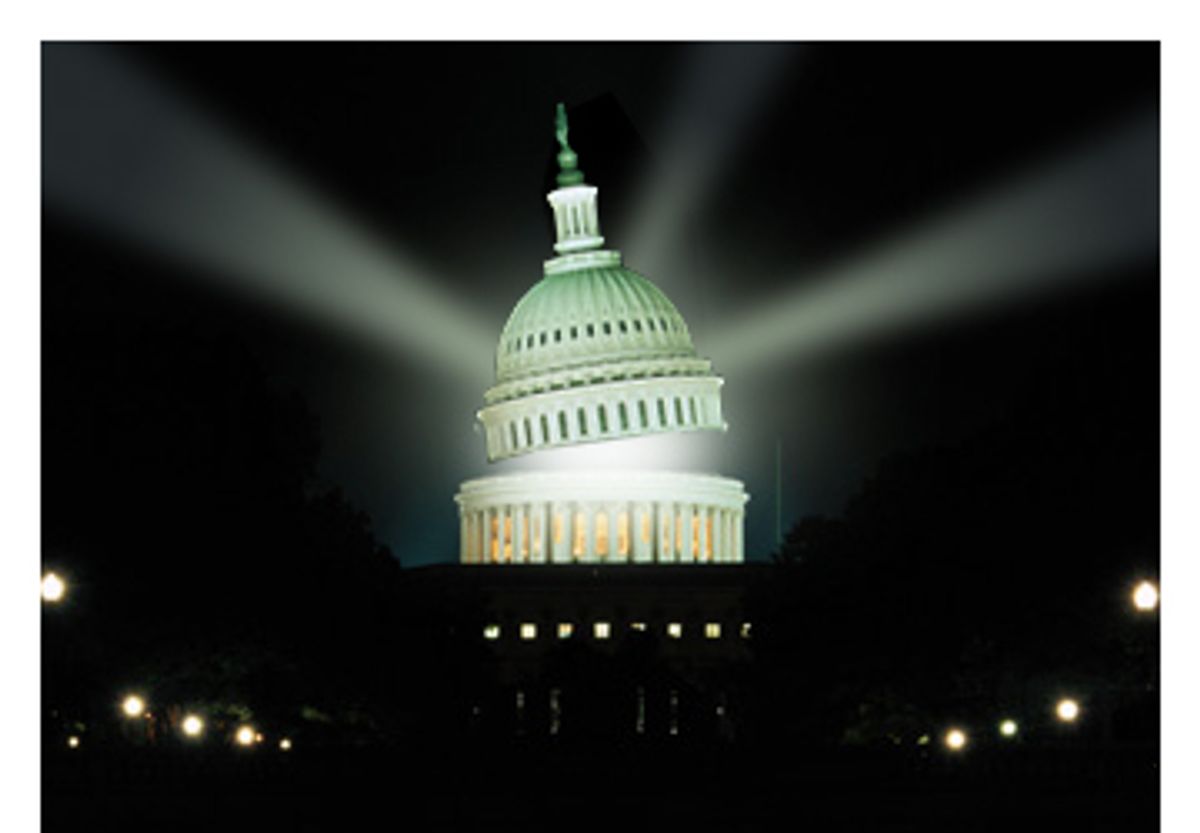 By ending Republican hegemony in the midterm elections, the nation's voters were expressing hope that Democrats could change the direction of a government that has forfeited public confidence. Such hope is highly perishable and must be nourished with principled action early in the coming year. It isn't easy for people to believe in politicians.

For the moment, at least, the Democratic Party is still riding on post-election political momentum (while the Republican Party remains stuck in negative terrain). Although many mainstream commentators continue to claim that Americans dislike both parties equally, their shorthand cliché is badly out of date. A substantial plurality of voters now say they expect to vote for a Democratic presidential candidate in 2008, and that partisan preference remains especially strong among the young.

But in the current political environment, the opportunity to rebuild a governing majority of the center-left could evaporate without being realized. National opinion remains angry, apprehensive and volatile. Having turned sharply against George W. Bush within months after his second inauguration -- initially reacting to Social Security privatization, then to the Katrina disaster, and finally to the failure of the war in Iraq and the stunning pageant of corruption on Capitol Hill -- disappointed voters could just as easily discard the Democrats in 2007. If the newly empowered opposition fails to honor its commitments, that is exactly what will happen.

Many if not most Americans have repeatedly expressed an underlying doubt that either party can still serve the public interest. Those feelings are especially prevalent among the independent voters whose support was critical to the recent Democratic victory. To dispel such cynicism and fulfill the expectations raised by their anticorruption campaign, the new Democratic congressional leaders must quickly deliver real government accountability as well as substantial reorganization of their own institutions. While voters may understand that major changes in healthcare, education and environmental stewardship will be difficult to enact under this administration, they will not have much patience for any evasion on reform of Congress.

Whether Democrats can overcome the old habits that have often made them inarticulate and inert, however, remains to be seen. To put it kindly, the signs are mixed.

Speaker-designate Nancy Pelosi, D-Calif., first displayed her deafness to the reformist vox populi when she tried to foist Rep. John Murtha, D-Pa. -- a courageous antiwar convert but an ethics scofflaw -- on the Democratic caucus as majority leader.

Pelosi seemed equally obtuse when she pushed aside Jane Harman, D-Calif., the ranking member on the House Intelligence Committee, to name Rep. Silvestre Reyes, D-Texas, as the committee's new chairman instead, after considering Alcee Hastings, D-Fla., a former federal judge whom she voted to impeach for corruption. Rather than replace the compromised Harman with a truly independent and competent figure such as Rush Holt, D-N.J., a scientist and former State Department intelligence officer, she heeded the dictates of old-style patronage politics.

That decision boomeranged on Pelosi almost instantly, when Reyes gave an interview to Congressional Quarterly correspondent Jeff Stein that revealed the congressman's embarrassing ignorance of the most basic facts about al-Qaida, Hezbollah and Islam. (She should have suspected that Reyes was a dubious choice simply because of his curious attraction to the conspiracy theories of Curt Weldon, the wacky Pennsylvania Republican who lost his seat last month.)

More encouragingly, both Pelosi and Sen. Harry Reid, the incoming Senate majority leader, have indicated that they will support a broad package of ethical and procedural improvements next year. The most important proposals for best practices would require that "earmarks" in appropriations bill be identified by the sponsoring members' names; that members and staff stop taking gifts, meals and free travel from lobbyists; and that conference committees, where much midnight skulduggery has occurred, be open to public and media scrutiny. Certain members of both parties will no doubt resist or undermine those changes, which would represent important progress toward honest government; if the leaders enact such stringent reforms they will deserve great credit.

But lobbyists and politicians -- and the money that sustains their relationship -- inevitably find ways to get around the rules. For that reason, the leaders must also reform the dysfunctional ethics enforcement procedures. The House Ethics Committee is a sinkhole of the worst kind of "bipartisanship," with both sides cooperating to thwart effective monitoring and sanctions. The most promising solution is an outside Office of Public Integrity that would operate as a watchdog over Congress, with investigative authority, just as inspectors general and integrity monitors oversee government agencies. Not so long ago, Pelosi herself sponsored legislation that would have established such an office. In response to protest from the ranks, she has backed away from the proposal and asked a "task force" to report on its feasibility and advisability by next March. This is a waste of time and, worse still, a potential compromise with discredited Republican leader John Boehner. Again, Pelosi appears not to quite grasp the potential consequences of her actions. If she fails to institute this new policing mechanism, then whatever credit she and her party earn for other reforms will be diminished. That would be too bad for the Democrats and the country.

Pelosi and Reid should receive the benefit of the doubt, despite early stumbles and hesitations. But when the new year begins, they must swiftly distinguish themselves from their soiled predecessors -- or they will confirm voters' cynical assumptions about them, their party and their vocation.