The building tycoon and reality TV star is not a pop-culture hero. He's a bully with a combover. 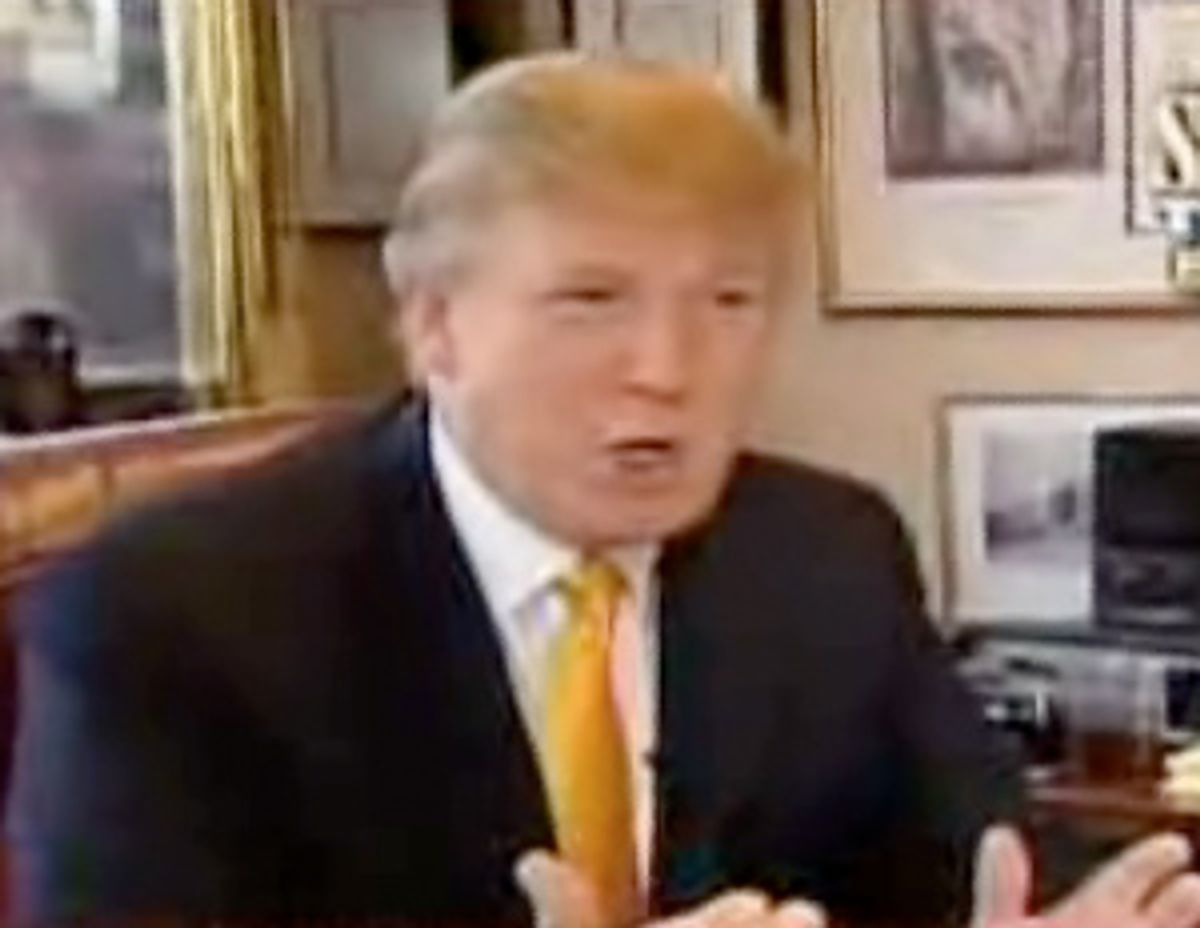 I don't apologize for loving the pop-culture innovations of the 1990s, reality TV and fake news. Every once in a while, though, the odd blend of celebrity worship and irony can make you feel a little sick, the way I did watching my beloved Stephen Colbert ham it up with Henry Kissinger on Wednesday night. Sure, it was funny, but blech.

We can also blame reality TV for making Donald Trump just a cool Cheeto-haired rich guy to a new generation who watched "The Apprentice," instead of the vain, greedy, loathsome laughingstock we learned to laugh at when he was regularly featured as a "short-fingered vulgarian" in Spy Magazine, the 1980s answer to "The Daily Show." Sadly, even Spy's (and Inside's and New York's) Kurt Andersen is glad he left his surly ways behind, telling an interviewer just this week that there was always "joy," never "anger" behind the often vicious if hilarious satire of Spy. I don't think he ever read it.

This week, the Donald's orange combover is everywhere you look, thanks to his dust-up with Rosie O'Donnell. I want to thank Trump for giving me a belated appreciation of Rosie. This week he was an ass twice, first in the way he "forgave" poor Tara Conner, the alleged girl-kissing, boozing Miss Kentucky who had to beg to keep her Miss USA tiara. Everyone expected Trump to say his trademark "You're fired," but the showman knew the box-office power of a second chance, especially for gorgeous blondes who like to smooch with other gorgeous blondes. "She's a good girl," he intoned, as if he'd know one if she... smooched him.

Enter Rosie on "The View," ridiculing the sham of Trump setting himself up as moral arbiter. You've seen the clip everywhere; the words aren't as good without the physical comedy: Rosie's black hair flung over to one side, her rubbery face and lips aping Trump's semi-simian delivery. She intoned on the idiocy of the twice-divorced Trump deciding which girls get second chances and called him a "snake-oil salesman." It didn't seem like that big a deal; Hillary Clinton's star turn on the suddenly newsmaking show that morning got all the attention.

Until Trump unloaded on Rosie. In several different venues he found every imaginable way to call her "fat," repeatedly branded her "a loser," "a terrible person" and "disgusting." He threatened to steal her girlfriend, Kelli. He continued it into a second day with a farcical call into Larry King as he flew in his private jet to his horrorscape of "Mar-A-Lago." Again he called O'Donnell fat and horrible in every way he could, even joking with Larry, "How would you like to kiss that goodnight?" He kept talking about what a grand failure Rosie and "The View" are, even though the show's ratings, since she joined this fall, are up 30 percent. His grandiosity knows no limits -- he's most angry that she claimed he went bankrupt (he might personally have never filed, but his businesses sure have), and compared Rosie's attack to "the lies that got us into the war with Iraq" and insisted we really should be talking about Iraq, not him and Rosie. Really, Donald? Then shut up.

Obviously, Donald Trump doesn't like his enemies, but he's a bully who reserves a special misogynist bile for women. Remember his scorched-earth takedown of Martha Stewart after their "Apprentice" collaboration failed? Or even the dismissive way he canned his "Apprentice" sidekick, Carolyn Kepcher, just when her rising popularity possibly threatened his own? But in the spirit of the season, I'm choosing to look at the gifts Trump gives us, in my case, a belated respect for Rosie O'Donnell. Not only her talents; you can be ambivalent about her comedy, even her point of view.

But it clearly marks a victory in the culture war that an out lesbian can host a daytime show on a major network, chat about her girlfriend, criticize the pope and the president, attack homophobia where she sees it (I can't peer into Kelly Ripa's heart but my own heart froze when she ripped rumored-to-be-gay Clay Aiken's hand from her mouth insisting, "I don't know where that's been!"). And where she can puncture big fat hot-air targets like Trump every day, without asking permission. I don't agree with everything she says, but I'm glad she's there. Merry Christmas, Rosie.