Too little, too late

Despite being armed with fat cash incentives, recruiters may not be able to meet Bush's call for a bigger Army -- even if they keep lowering standards for new recruits. 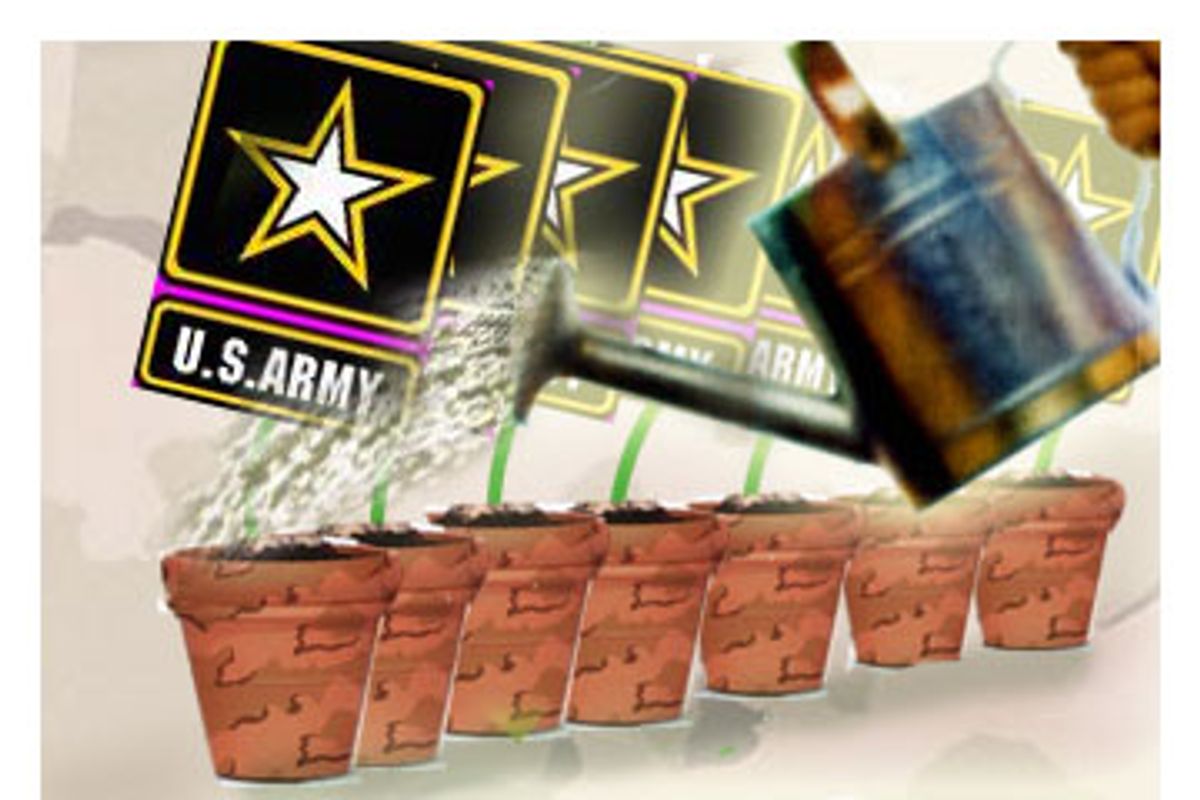 Reversing his long-held opposition to increasing the permanent size of the U.S. military, President Bush is now considering calling for an addition of up to 70,000 troops. But with the Army already in an uphill battle to meet its current recruitment targets, many military experts fear Bush's expansion plans are way overdue and can be met only by lowering the standards for Army recruits -- including those with criminal records. Lawrence J. Korb, an assistant secretary of defense under Reagan and a senior fellow at the Center for American Progress, summed up Bush's notion of a bigger Army this way: "Good idea, five years too late."

Bush is belatedly joining the ranks of many retired generals, military experts and some members of Congress who have been pushing for a substantial increase in the U.S. ground forces for years. Retired Maj. Gen. John Batiste, who led the Army's 1st Infantry Division in Iraq in 2004 and 2005, said it has long been painfully obvious that the military is "far too small to accomplish what it is being asked to do."

The expansion is desperately needed but "should have been done before we went to war in Afghanistan and Iraq," lamented David Segal, director of the Center for Research on Military Organization at the University of Maryland. Now it may be too late.

Last year, the Army missed its recruiting goal by the biggest gap since 1979. It met its quota this year, in part by lowering standards. The Army has nearly doubled the percentage of recruits it will accept who score badly on aptitude tests and increased the maximum enlistment age from 35 to 42. It has also admitted more recruits who previously would not have made the grade for criminal, medical or moral reasons. In 2005, 17 percent (21,880 new soldiers) qualified under such waivers, a 42 percent increase since the pre-Iraq year of 2000.

The Army says that the waiver program simply gives young people who made mistakes a second chance. But the matter is not academic. In an extreme example, Pvt. Steven Green, the soldier in federal prison under charges that he raped and killed a 14-year-old girl in Iraq and murdered three of her family members, got into the Army with a waiver. He had three criminal convictions and a history of substance abuse. Segal said that to expand the Army anytime soon might mean that the ranks will be filled with "more people with criminal records."

In addition to lowering standards, the Army has dramatically increased the number of recruiters in the field. But signs indicate that they are increasingly desperate. The Army briefly suspended recruiting efforts completely in May 2005 after receiving reports that recruiters were forging documents, helping young people dupe the drug-testing system and asking teens to lie to their parents.

And the recruiters are already armed with dramatically sweetened incentives for those who are willing to sign up. New recruits may now be eligible for a $40,000 cash bonus for putting their name on the dotted line. Eli Flyer, a former senior manpower analyst for the Pentagon, said that, "to meet its quota of 80,000 new recruits annually, the Army has pulled out all the stops."

Even if recruitment weren't so challenging, as it has been during the Afghanistan and Iraq wars, it would still take at least until 2008 to recruit and train enough new troops to substantially increase the number of units on the ground in Iraq. And it would be very expensive -- roughly $1.2 billion a year for each additional 10,000 troops, according to military experts.

Former generals such as Batiste say the military has paid a higher price for not investing early in a bigger Army. "We went to war on the cheap in both Iraq and Afghanistan, we asked our military to do a number of tasks which should have been done by other departments and agencies in our government, and we inconvenienced the American people as little as possible."

There is a sad symmetry to the president's belated consideration of a bigger Army and his recent mulling of possible new strategies on Iraq. Just as the president's strategic options had dwindled precipitously by the time he decided to change course in Iraq, so the expanded recruiting effort he may endorse at this late date will be severely hampered by the disincentive posed by four years of a brutal and seemingly unproductive war.