This smoldering picture, based on P.D. James' dystopian novel, may be the bleakest movie you'll ever want to see twice. 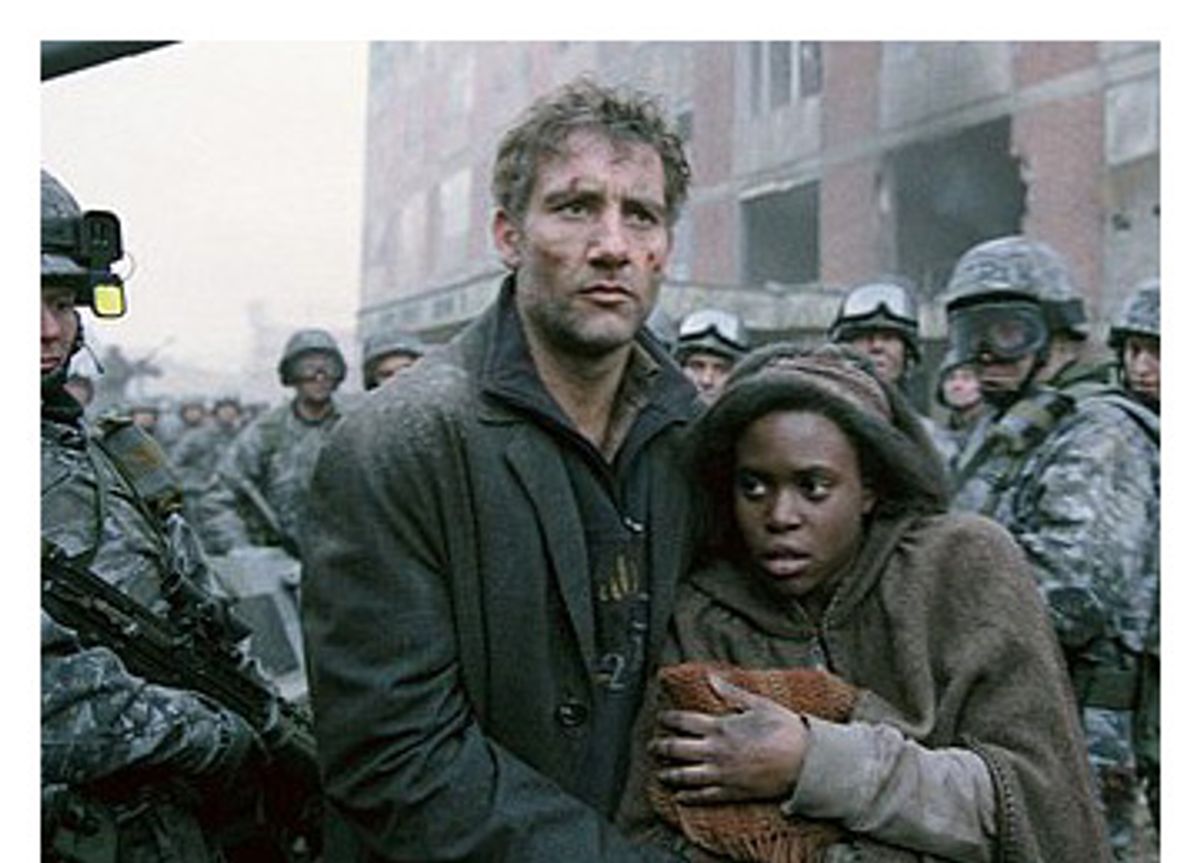 "Children of Men" takes place in 2027, in the grayest London imaginable, in a world where humans have lost the ability to reproduce. (The youngest person alive is 18.) The streets are plastered with literature entreating native Britons to smoke out and turn in illegal immigrants: In a world that's gone to hell, no country can afford generosity to outsiders. Terrorism and war have destroyed whole nations. Britain soldiers on, but for those who just can't take it anymore, suicide is encouraged: There's even a special government-sanctioned drug, with its own Lunesta-style commercial presenting death as a dream state you can just drift into, a vast improvement on the suffocating present.

"Children of Men," directed by Alfonso Cuarón and based on P.D. James' 1992 dystopian novel, is the bleakest movie I've ever wanted to see twice. Coming nearly 15 years after James' novel, it takes into account world events that she could never have dreamed of. Yet the picture doesn't so much build dread as smolder with it, as if we'd landed on a scorched, broken world still desperately trying to throw off some warmth.

And that right there is the Cuarón touch: The director of movies like "Harry Potter and the Prisoner of Azkaban" and "Y Tu Mamá También," pictures that radiate joy (even if, in places, they harbor their share of darkness), Cuarón at first seems like an odd choice to direct a pessimistic meditation on a world without children. But Cuarón is really the perfect choice: A filmmaker so responsive to joy and pleasure is our best guide to a world in which those essentials have gone missing. (If the picture had been made by, say, Lars von Trier, a filmmaker who fears for humankind but doesn't care much for people, a dystopia would just be business as usual.) "Children of Men" is a solemn, haunting picture, but it's also a thrilling one, partly because of the sheer bravado with which it's made. It left me feeling more fortified than drained. Cuarón, the most openhearted of directors, prefers to give rather than take away.

Clive Owen plays Theo, a former activist who, for reasons that become clear as the story moves forward, has given up on the idea of change. With his weary eyes and stubborn, perpetual 5 o'clock shadow, Theo has the look of a man who has just been pulled through a keyhole. In the movie's first half-hour, we're given bits of his past to piece together for ourselves. We meet his close friend and confidant, a raffish perennial hippie named Jasper (Michael Caine), who seems to know more about him than anyone. Jasper lives in seclusion with his wife, a former journalist, who has been in a catatonic state for years after having been tortured by MI5. (We pick up that information as the camera scans on old newspaper clippings, an example of the subtlety with which Cuarón works here and of the movie's point of view: In this world, it's a given that democratic governments torture citizens who dissent.)

Suddenly, and not accidentally, Theo becomes reunited with Julian (Julianne Moore), his one-time, estranged lover, who hasn't given up on this despairing world as he has. A radical who's fighting for a nearly hopeless cause, she forces Theo to help her. The other players in this serpentine drama include Luke (Chiwetel Ejiofor, in an elegant, unsettling performance), an aggressive comrade of Julian's; Miriam (the wonderful Pam Ferris), a watchful, wary presence whose job becomes clear as the story unfolds; and a sullen (at least at first) young girl named Kee (the vibrant Claire-Hope Ashitey), whose very name suggests how important she might be to humankind's future.

The plot of "Children of Men" is worked out intelligently, and the writers wisely avoid overt, doomy futuristic slogans. (There's no population crisis when it comes to this movie's screenwriting credits: They list a total of five writers, including Cuarón and his writing partner Timothy J. Sexton.) Cuarón draws some mild present-day political parallels: The buses used to haul immigrants off to crowded refugee camps have "Homeland Security" emblazoned across the side (although in this story, there's enough blame for the mess the world is in to go around).

Cuarón has structured the movie beautifully, and its craftsmanship is evident in thousands of small touches -- as well as in the very things Cuarón doesn't do. Each scene is cut at precisely the right point, not a hairline too soon or too late. (Caine, in particular, gives a deeply resonant performance, and the movie's editing serves him beautifully in several crucial scenes; we see all we need to see, and yet Cuarón always allows his characters their privacy, and their dignity.) The action sequences are tense and distinctive, worked out to the smallest, most precise detail. Their clarity is jolting, particularly in the context of the noisy messes we so often see in contemporary action movies; that distinctness helps build the picture's mood of muted terror.

The Cuarón touch is everywhere in "Children of Men." This is a world without children, but not without animals: People treat their pet dogs and cats not necessarily as child substitutes but as loyal companions in this cheerless environment. In this upside-down, inside-out London, country life has blurred with city life: At one point Theo enters a deserted school and startles when he hears a rustling noise -- only to see a deer stumbling, in that specifically deerlike crazy-graceful way, across a hallway. Sheep cruise the city streets, as simultaneously confused and oblivious in the city as they are in the country; hens cluck-cluck through war zones. The animals in "Children of Men" represent the one note of stability in the world -- apparently, they're still able to reproduce, as if, in their innocence, they've escaped the cruel fate assigned to humans by the gods. It's a measure of Cuarón's innate decency that he doesn't milk pathos by making bad things happen to animals; the subtext is that the humans here are suffering enough for everyone.

The suffering of humans is everywhere, although the actors are so in tune with Cuarón's mood and approach that they never overstate the case. They make us feel the weight they're carrying without grinding us down. Moore gives a performance that's almost medievally grave: Her delicate beauty notwithstanding, she's unnervingly tenacious, like a fearless warrior saint you might see depicted in an ancient stained-glass window. And Owen gives what may be the finest performance of his career (among many terrific ones): His Theo, so beaten down and disillusioned when we first meet him, evolves into a man of action -- but his transformation doesn't have the sentimental gleam of, say, Bogart's in "Casablanca." This performance is rawhide-tough, but nuanced, too. (And it's one of the movie's strange, charming fillips that nearly all the animals in "Children of Men," even the grouchiest guard dogs, gravitate toward Theo; his somber demeanor seems to attract and calm them.)

Even in a picture where the smallest gears all work perfectly and harmoniously, Emmanuel Lubezki's cinematography is a unifying and galvanizing force. Lubezki's credits include "The New World" and "Sleepy Hollow," as well as several of Cuarón's pictures (including the unfairly overlooked "Great Expectations" and the wondrous "A Little Princess"). He's one of the finest cinematographers working, and "Children of Men" may surpass even the astonishing work he has already done. It's something of a trend now for filmmakers to use grayed-out, desaturated colors, and it can be an effective technique. But Lubezki's color tones are something else again: Here, even though he's working in a muted, sober palette, the colors still look vital and not simply tired. Even his graphite and smoke-silver futuristic London, certainly not a place where you'd want to take a vacation, has a wary, beaten-down beauty, as if the city itself were haunted by memories of what it used to be.

In "Children of Men," nature and civilization, never comfortable bedmates, have completely stopped speaking to each other. And if doing "the natural thing to do" no longer results in babies, then what is there left to do? Lubezki's camera, often in long, unbroken takes, shows us crumbling city buildings where people cluster together, clinging to whatever life they have left. But at one point he also aims his camera up toward the sky, through a stand of tall trees, their branches creaking in the indecisive wind. Is this an image of pure desolation, or a wordless invocation? "Children of Men" shows us a world where angels fear to tread, and babies have stopped coming, too. But there's always the hope that the right lullaby could bring them back.