Salon's critic picks the movies that mattered, from the extraordinary OutKast musical "Idlewild" to the imaginative Bond adventure "Casino Royale." 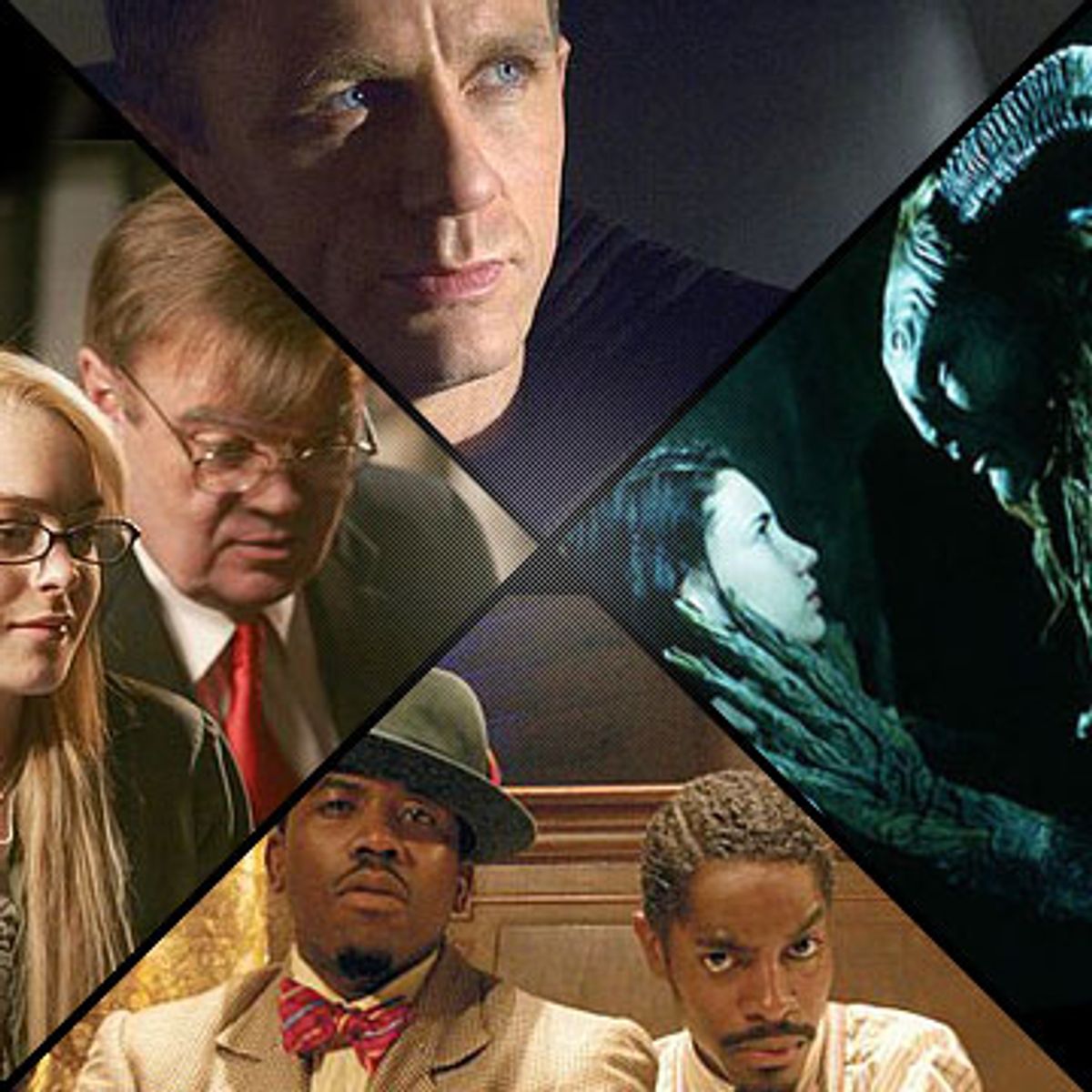 In Nancy Meyer's otherwise wretched romantic comedy "The Holiday," an elderly screenwriter (played by Eli Wallach) who worked in Hollywood's glory days opens the newspaper and remarks that there are nine movies opening on the following weekend. In the old days, he said, you wouldn't have nine big pictures opening in a month. He also makes the crotchety and painfully apt observation that today, movies are made or broken in their first weekend. Movie grosses are reported as if they were baseball scores, the kind of thing in which ordinary moviegoers, not just Hollywood professionals, take an interest.

So at the end of the year, when it's time to look back on the landscape of movies that have been released, what we really have is a patchwork of weekends, each one with its "top" movie, but with no clear way of discerning trends -- other than to say that pirate-movie sequels and movies based on comic books tend to do very well with audiences. Even so, very rarely does the same picture hit No. 1 two weeks in a row, no matter how good it is -- or how hyped it is. Sometimes movies are defended vigorously by fans for a week or so after their opening, and yet two or three months later, almost no one remembers them -- "V for Vendetta," for example. Even "Pirates of the Caribbean: Dead Man's Chest," the year's top-grossing movie and one of the highest-grossing movies ever, may be very fondly remembered by the people who had a good time watching it. But do even those who enjoyed it think of it as the greatest movie of the year? Or is it the equivalent of the guy in a bar who becomes your best friend after you've had five beers?

But 2006 did offer a few surprise lessons for Hollywood in what audiences will and won't buy. Moviegoers aren't as susceptible to hype -- either the kind they pay for or the kind that grows on its own, like a network of spores, across the Web -- as the studios would like to think: One of the most anticipated pictures of the year, "Snakes on a Plane," was rejected even by audiences who'd been looking forward to it for months. On the other hand, "Casino Royale," a picture that was sold with the usual amount of advance advertising, sneaking up on the mass audience's awareness, is continuing to draw audiences more than a month after its release. It hasn't occupied the No. 1 slot in any single week since its opening (pictures like George Miller's "Happy Feet" and Mel Gibson's "Apocalypto" have been grabbing that top slot), but people are still finding their way to it rather than forgetting about it after its opening weekend, which makes it a highly unusual bump on the topography of contemporary Hollywood releases. And I don't think anyone was fully prepared for the success of "Borat: Cultural Learnings of America for Make Benefit Glorious Nation of Kazakhstan," one of those rare pictures that benefited from months of pre-release word of mouth. (The fact that it featured a character who already had a small but solid fan base didn't hurt.)

In 2006, Hollywood also should have learned a thing or two about so-called quality pictures, the kinds of movies that don't make much money but sometimes win Oscars. You can't give the public a "quality" picture that's simply lousy, like "All the King's Men." This was also the year movies tried to grapple directly with 9/11: Neither Paul Greengrass' "United 93" nor Oliver Stone's "World Trade Center" -- two very different pictures -- drew particularly large numbers of moviegoers, but then, neither movie is exactly a fun night out. Their mere existence says more than their box-office numbers do: Movies based on comic books (some of which are quite wonderful) are likely to make money. Movies based on horrific real events are never going to pack 'em in.

In most cases, though, whatever opens big this week will be nearly forgotten by the next anyway, which is one of the saddest things about living in a time when several hundred movies, from tiny indies to monster blockbusters, are released each year. There's no time to savor anything, to compare notes with our friends, to catch wonderful things we might have missed -- smaller movies, in particular, often disappear from theaters before anyone can even register their presence. The loss of an artist like Robert Altman would be difficult to bear in any year. But his loss cuts even deeper because he came of age as a filmmaker in an era when people could still be galvanized by movies, when there was time to refine our likes and dislikes, to parse our passion for or ambivalence about a picture before the next weekend's wave would roll in. We don't need more movies in our lives. We need more time, a commodity that's in short supply for almost everyone I know, to be able to catch at least some of these movies on the fly and define for ourselves which ones really matter.

The following 12 movies, plus a few more, mattered to me over the past year. As I say every year, these are not the "best 10" movies of the year based on some mythical standard that doesn't always fit with the way we respond to movies. These are simply the pictures that captivated me as I watched them and that stuck with me long after.

"Days of Glory (Indigènes)" -- Rachid Bouchareb has made an astonishing film about Algerian soldiers fighting to defend France, the country they consider their motherland, from the Nazis. A beautiful, devastating picture about what it means to love your country when it doesn't love you back. (The Weinstein Co. has released this picture in New York and Los Angeles for a brief Oscar-qualification run; look for wider release in other cities early next year.)

"Casino Royale" -- James Bond movies, beloved, junky pop-culture pleasures, aren't supposed to make best-10 lists. But this imaginative, superbly acted adaptation of Ian Fleming's first 007 novel works on multiple levels: As a Bond movie, as a thriller and as a marvel of craftsmanship. It's even better on the second viewing.

"Pan's Labyrinth" -- Guillermo del Toro's dazzling adult fairy tale about the end of childhood, and the dangers of blind ideology, is one of the finest fantasy pictures ever made. Watching it is a glorious, harrowing experience.

"The Queen" and "Marie Antoinette" -- Fraternal-twin pictures that present maligned royals as human beings. Stephen Frears, knowing tragedy is only a flea bite away from comedy, uses our laughter, and even our derision, to lure us into a place where we can feel only sympathy for Elizabeth II (played, brilliantly, by Helen Mirren), a woman locked in a gilded cage of tradition and duty. Many critics sentenced Sofia Coppola to the cultural guillotine for a) having a famous father and b) not featuring enough peasants. Few seemed to have watched her movie, a fantasy portrait of a teenage queen that connects with universal adolescent feelings of belonging nowhere.

"Dave Chappelle's Block Party" and "Shut Up & Sing" -- Two beautifully made pop-music documentaries whose spirit of inclusiveness suggests, daringly, that the United States might be one country instead of a carved-up mess.

"Idlewild" -- Messy and extraordinary, Bryan Barber's Prohibition-era musical, starring OutKast's Andre 3000 and Big Boi, is a dream history of black pop culture, and a testament -- to paraphrase a line from Stanley Crouch -- to the ways that inventing, borrowing and refining can bring us closer to the lives we want to lead. One of the most beautiful-looking pictures of the year (the cinematography is by Pascal Rabaud), "Idlewild" slipped out of theaters before most people could see it on the big screen. It deserves an immediate rep-house revival.

"The Painted Veil" -- John Curran's adaptation of Somerset Maugham's novel about a spoiled Englishwoman (Naomi Watts) whose life is changed when she begins helping her doctor-husband (Edward Norton) fight cholera in the Far East avoids Merchant-Ivoryitis at every turn. A superb example of modern melodramatic filmmaking that respects, but doesn't fetishize, the past.

"The Notorious Bettie Page" -- Mary Harron's affectionate and intelligent portrait of the famous '50s pinup queen asks, and answers, the question of what the camera can tell us about a life. Gretchen Mol's performance is as fearless as it is lovely.

"A Prairie Home Companion" -- Robert Altman's final picture is a shaggy-dog story that turned out to be a swan song, and its spirit and sense of community are pure Altman: The picture gives the feel of life unfolding before our eyes. And, in true Altman fashion, it's filled with half-finished conversations that, even in their truncated state, manage to say it all. Altman's movies -- even the bad ones -- have always been the sort that foster vivid discussion and fierce arguments. There will be no more Altman movies. But we can honor him by keeping the conversation going.