The man who ended our Nixon nightmare

Although ultimately an ineffective leader, Gerald Ford was the right person for the presidency in the wake of the Watergate crisis. 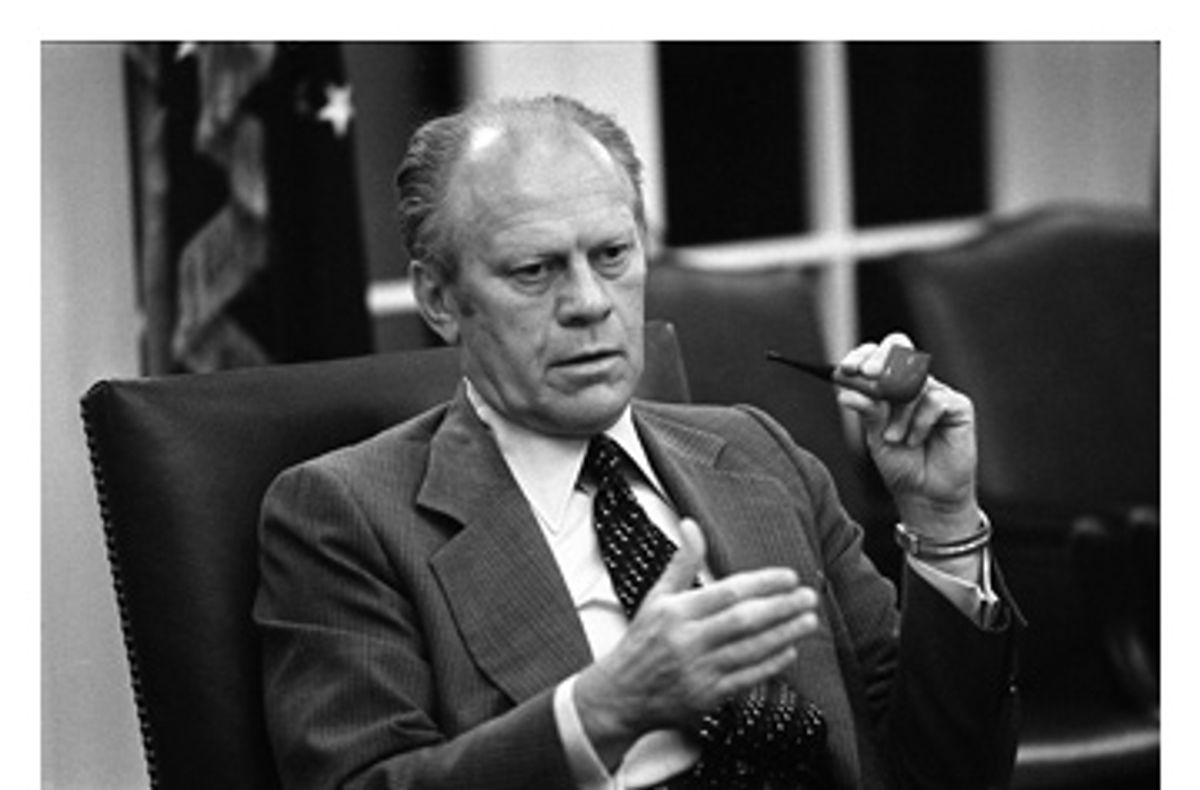 During the summer of 1973, House Minority Leader Jerry Ford was facing the last-hurrah stage of his quarter-century career in Congress. Celebrating his 60th birthday -- a classic moment to take stock of one's life and limitations -- Ford was enough of a realist to accept that he would never fulfill his ambition to become House speaker, since the Republicans had been in the minority on Capitol Hill for two decades. As his biographer J.F. terHorst later wrote, "For the first time, Ford began thinking seriously of retiring ... He could collect a full congressional pension and, if he wished, he could return to the private practice of law in Michigan or Washington."

A year later, Ford was moving into the White House as the 38th president rather than hanging out his shingle as a lawyer-lobbyist back home in Grand Rapids, Mich. Ford's unexpected ascent defied all laws of political gravity. Vice President Spiro Agnew resigned in October 1973 for the ultimate low-rent reason: old-fashioned cash-in-a-white-envelope bribery. The 25th Amendment to the Constitution -- ratified just six years earlier in 1967 -- allowed the president to nominate and Congress to approve a replacement vice president if the office became vacant. With Richard Nixon nearing his final days, Ford was, to put it bluntly, impeachment insurance. As political reporter Jules Witcover wrote in his 1977 book, "Marathon," Nixon did not "want someone whose political attractiveness and ability were so outstanding as to make his own impeachment palatable in Congress. Loyal, commonplace Jerry Ford clearly filled the bill."

There are rare moments when political reality almost replicates patriotic mythology -- and Ford's first weeks in office in August 1974 fall into this star-spangled category. Ford's words from his White House address after taking the oath of office still resonate: "My fellow Americans, our long national nightmare is over. Our Constitution works; our great Republic is a government of laws not men." Ten days into his presidency, already conscious of the looming conservative threat from Ronald Reagan, Ford went before the Veterans of Foreign Wars to announce a limited amnesty program for Vietnam draft evaders. Then. on Sept. 8, Ford announced the boldest decision of his presidency -- his pardon of Richard Nixon. "I think it was the right thing to do," Ford told his wife, Betty, according to her autobiography, "The Times of My Life." She added, "He's never changed his mind, though we both believe the pardon, more than anything else, cost him the 1976 election."

Indeed it did -- as I can testify from my personal vantage point working for the Jimmy Carter campaign against Ford in the 1976 election. Yet these days only the most stubborn and unyielding Nixon haters still question whether the cleanse-the-air pardon was justified. America is simply not a banana republic in which former presidents should face the prospect of prison or ruinous civil judgments after leaving office. Ford paid the ultimate political price for his courageous decision to restore a veneer of civility to our politics even in the face of the intemperate passions let loose by Vietnam and Watergate. According to terHorst, who resigned as White House press secretary in protest over the pardon, Ford told him at the time, "I'm not concerned about the election of 1976 or the politics of it."

With three decades of hindsight, however, it is hard to see how Ford could have been a successful president, even without the pardon. Ford, whose Midwestern conservatism was built around balanced budgets and Chamber of Commerce verities, was a transitional figure in the history of the Republican Party, destined to be swept aside by the ideological certainties of the Reagan right. Nothing better symbolized Ford's fecklessness than his selection of Republican liberal hawk Nelson Rockefeller as his vice president, only to publicly dump Rocky from the 1976 GOP ticket when he was challenged by Reagan. Still, Ford's most enduring gift to liberals was his appointment of still-serving Justice John Paul Stevens to the Supreme Court in 1975.

In fairness to Ford (and Carter), the 1970s would have been a miserable decade for any occupant of the Oval Office. As president, Ford had to endure the most humiliating defeat in modern American history -- the 1975 fall of Saigon, complete with the desperate helicopter evacuation from the American Embassy. The Soviet Union was still seen as a formidable military adversary, not the fast-deteriorating nuclear power of the late 1980s. Inflation was spiraling out of control, and Ford's WIN buttons (the initials stood for "Whip Inflation Now") were a poor excuse for a coherent economic policy.

Modesty is not a characteristic of great leaders. It is hard to imagine another future president saying anything analogous to this self-summation when he succeeded Agnew, "I am a Ford, not a Lincoln." But Ford, for all his limitations, was the right person to step into the presidency in 1974 after the most wrenching constitutional crisis in more than a century. Ford's blaze of glory may have been fleeting, but its brightness more than counterbalanced its brevity. Not a bad career capstone for a man who in 1973 seemed poised to join the roster of nearly forgotten congressional leaders who never wielded real power.