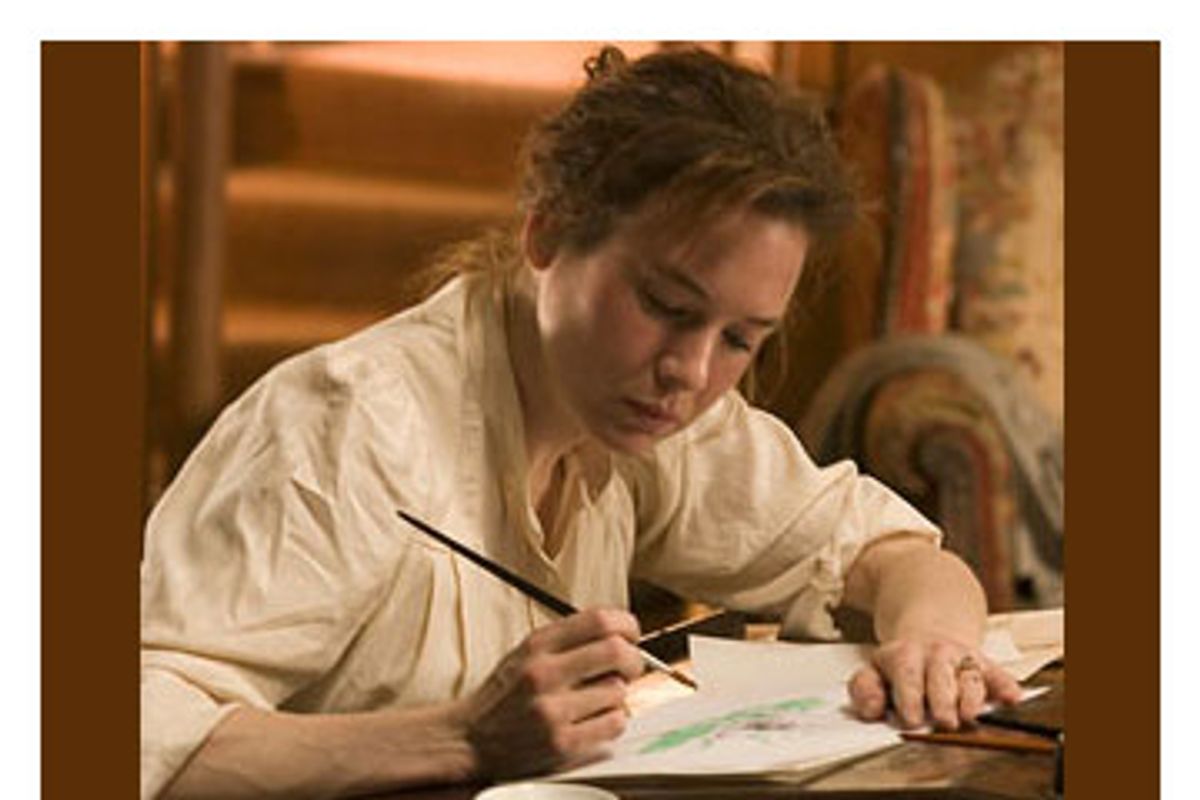 Beatrix Potter's drawings and stories -- her most famous book, "The Tale of Peter Rabbit," published in 1902, was the first of the 23 she wrote -- feature woodland animals engaged in anthropomorphic activities such as breaking into dollhouses and going to market with little kerchiefs tied on their heads. This is the kind of fanciful invention that children love, but what always strikes me about the Beatrix Potter books when I revisit them is how these creatures -- rendered in soft but vivid watercolor tones, dressed in their capes, their brass-buttoned coats, their miniature leather slippers -- possess so much innate animal dignity. In "The Tale of Two Bad Mice," when mouse husband-and-wife Tom Thumb and Hunca Munca discover that the lovely hams and puddings laid out on a dollhouse table are made of plaster, they dash them to the ground in frustration. The indignity of being served faux food! Their embarrassment at being duped -- at having made the mistake of thinking they could so easily become part of civilization -- causes them to trash the dollhouse, and scurry back to their hole with a few purloined mouse-size cooking pots and a bassinet for their multiple babies. As much as they might enjoy a few creature comforts now and then, they're fully in touch with their true mouse nature.

"Miss Potter," a somewhat fictionalized version of the life of Beatrix Potter, captures the spirit of these marvelous books and gives us a sense of what the woman who wrote and illustrated them might have been like. Directed by Chris Noonan (whose last picture was the 1995 "Babe") and starring Renée Zellweger as Potter, the picture skips along with surefooted grace; there are times when it seems headed straight for a sticky saccharine trap, but Noonan and his actors always manage to swerve out of danger. It's also pure pleasure to look at: Potter was born in London but spent childhood summers in the country, where she would always feel most at home. Shot by Andrew Dunn, the movie takes place in city and country locales and draws energy from both settings -- even its dreamy country landscapes feel vital and thriving, not just postcard pretty.

No biopic should be taken as gospel, and even this one tweaks and elides some details about the author's life. But both Zellweger's performance and the movie around it add rich layers of detail to the stereotypical (and not quite correct) notions many of us have had about Potter: I'd always pegged her as an oddball loner, locked away in a room with her little creations. In real life, Potter may very well have been something of an oddball, but the movie suggests that she was also surprisingly outgoing and independent-minded, with a firm sense of how her books should be published and marketed. And although she did fall in love during her lifetime, she was adamant about not getting married just for marriage's sake. Born into an upper-class London family and expected to make a good match, she rejected the numerous acceptable suitors her parents presented until they finally just left her alone.

The picture shifts back and forth between Potter's childhood and adulthood: We see her as a spirited young girl (the actress who plays her is Lucy Boynton) chasing after a wild rabbit with her younger brother. (Just like Peter, that rabbit is uncatchable.) Then she sits down to sketch remarkable creatures like him in such astonishing detail that her father (played by the lovely actor Bill Paterson) can't help praising and encouraging her, while her mother (Barbara Flynn, whose bun hairdo and aura of Victorian disapproval conjure up images of Mrs. Santa in the Rankin/Bass "Rudolph, the Red-Nosed Reindeer") can't see that her artistic efforts are worth much.

Zellweger plays Beatrix as a grown-up version of that energetic and thoughtful kid, a little shy, maybe, but with the gift of charming even no-nonsense adults (her mother aside) with her part-naturalistic, part-whimsical pictures and stories. (The movie pulls off a neat trick, using animation to show how, when Potter is alone with her animal creations, they leap around on the page or wink at her with unapologetic cheekiness. They're alive, and they're in charge, as you'd expect from any fictional creature destined to live for 100 years and beyond.) "Miss Potter" makes it easy to believe that the man in charge of publishing Beatrix's books, Norman Warne (Ewan McGregor), would be taken not just with her work but with her winningly no-nonsense personality. McGregor plays Warne with shy affability -- he's particularly wonderful in the scene in which he first meets Beatrix and can't hide how delighted he is by her drawings. He's just breaking into his older brothers' publishing business, Frederick Warne & Co., and they've fobbed off this "bunny book" on him. When he lets it slip that that's how his brothers have referred to Beatrix's work, he saves the moment by assuring her that he'll devote himself to the book's success: "We shall give them a bunny book to conjure with!" And so, together, they do.

Zellweger's performance here is both winsome and disciplined. She avoids making Beatrix unbearably adorable (an accomplishment considering that this is, after all, a woman who considers bunny rabbits and hedgehogs her truest friends), and she doesn't make the mistake of simply playing traits, like "cleverness" and "mild eccentricity." She simply lets the character emerge through and between the movie's nicely wrought dialogue. (The script is by Richard Maltby Jr.) And her scenes with McGregor -- with whom she previously co-starred in the disappointing "Down With Love" -- have a tender, casual quality that makes them effortlessly believable.

There are other fine performances here: Emily Watson is Norman's exuberant spinster sister, Millie, and Matyelok Gibbs plays Beatrix's ancient, silent chaperone, Miss Wiggin, who drifts through the movie like a spectral Victorian vision. (It's a superb physical performance, showing you don't have to move around a lot to get laughs.)

"Miss Potter" is a very gentle-spirited picture, but it's not a self-consciously precious one, and I hope people won't avoid it out of fear of watercolor ducks, hedgehogs and rabbits -- which can certainly be horrifying things when they spring from a sensibility less clear-eyed than Potter's. The movie also explains what Potter did with the large sums of money her books made, an act of environmental preservation that's factual, not just the movie's invention. Beatrix Potter's legacy would be grand enough if she'd given us just one naughty rabbit in a blue coat, but "Miss Potter" also shows us how she used an imaginary world to make the real one better.