Bush has stifled the political debate about important issues. In 2007, it's up to Democrats to stir the nation back to life. 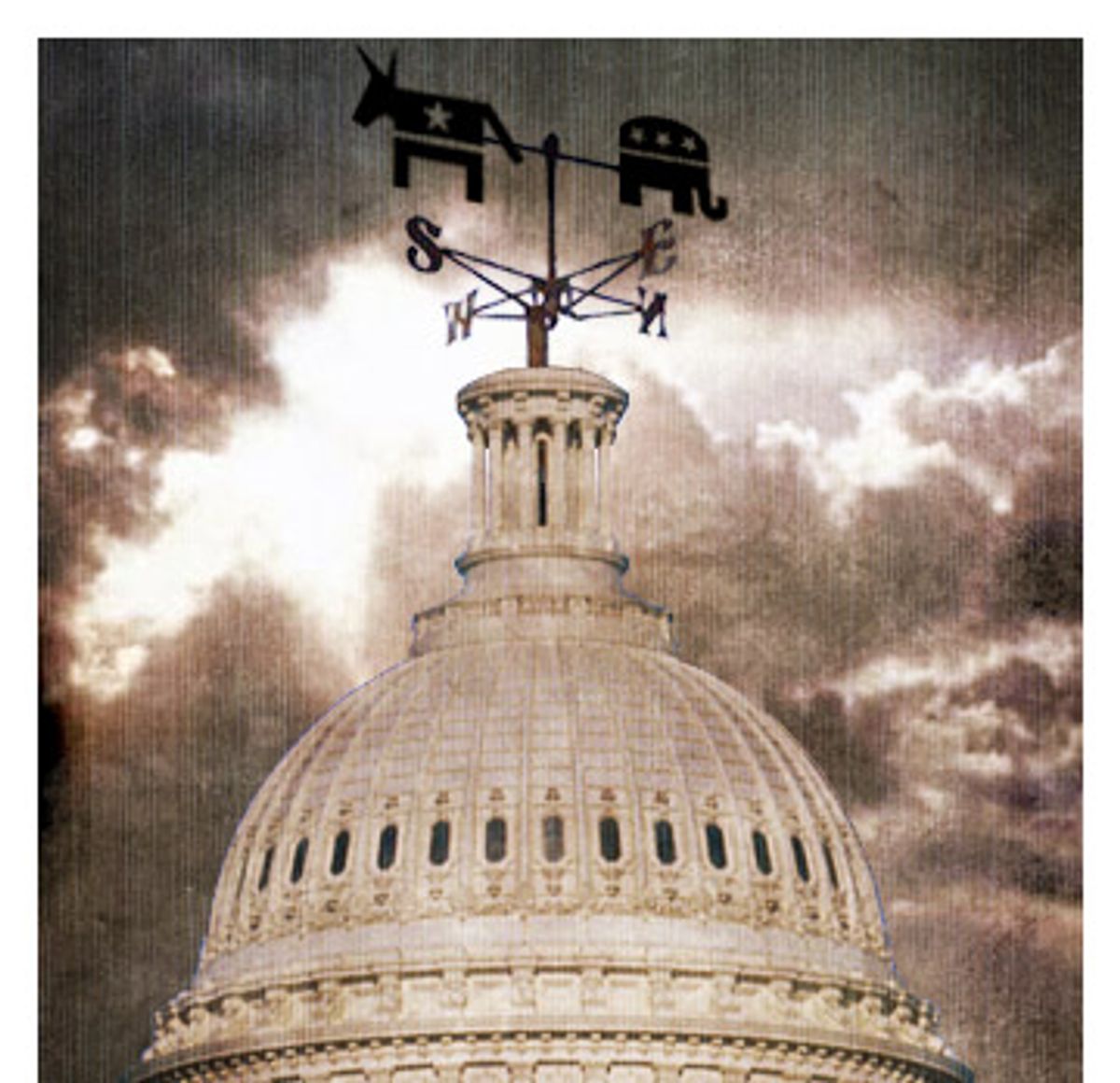 The headline in Tuesday's New York Times (both its print and Web editions) was a classic of fatuous uncertainty: "Jeb Bush Ponders Future, Not Knowing What It Holds." For those of us not born Bush, the future, of course, is equally perplexing, though our confusion is less likely to be chronicled by the Times.

Equally amusing is the persistence in the media of the contrary notion -- that true experts (generally observed seated at round tables on the sets of TV talk shows) can divine the shape of things to come. Especially at the beginning of the year, the media is obsessed with prophecy, all based on the illusory conceit that a dozen or so interviews can yield the identity of the next presidential nominees or the end-of-the-year Dow Jones Average.

Such hubris. Here it is 2007 -- and we have yet to even figure out what to call the decade we are living in. Are these the Zombified Zeroes? Or the Hold Your Nose Oh's?

What has been telling up to now about this unnamed decade is the stubborn, unyielding nature of our political divisions, reflected in the unusual similarity of the electoral map in the 2000 and 2004 presidential elections. As a result, political debates, while passionate, have taken on a frozen-in-amber quality. Is there something new to be said about the decision to go to war in Iraq, the Bush tax cuts, global warming or stem-cell research? And if miraculously there are original arguments that have been missed on any of these topics, is there anyone left in America with an open mind to be persuaded? (Small children and household pets do not count.)

After six years of static cling, the 2006 elections created an opportunity for serious rethinking that has yet to be exploited. With the Democratic takeover of Congress, suddenly national issues are no longer defined by a yes-no George W. Bush loyalty test. In the post-election period, even the president himself has distanced himself from his own administration by firing Donald Rumsfeld and grudgingly admitting that in terms of democracy Iraq is not the second coming of Periclean Athens.

None of this is to deny the power of a lame-duck president as the Democratic Congress will learn the first moment it tries to pass stem-cell legislation or tinker with the sainted tax cuts. Bush retains his loyal brigades on Fox News and conservative radio -- and few congressional Republicans are brave enough to publicly attack his record on a regular basis. But though the man hunkered down in the Oval Office remains armed with a veto pen and the mantle of commander in chief, the voters have left the Bush presidency twisting slowly, slowly in the wind.

Iraq poses the first challenge of the post-Bush world. Even though the Democratic Congress is not responsible politically or constitutionally for running foreign policy, it is in a position to spark a fresh debate over what should be done in Iraq now. The key word is "now." Most of what has been written and said about Iraq in recent months has been backward looking -- to the dubious premises behind the invasion and the incompetence of the American occupation.

With Bush reportedly poised to unveil his new military strategy next week, it is time to pose fresh, future-oriented questions about Iraq. If a "surge" in troop levels had a 20 percent chance of reducing the lethal nature of the civil war, would it be a risk worth taking? If America began a major troop withdrawal tomorrow, would more Iraqi civilians be alive in 2008? What should be the guiding philosophy that determines America's next step in Iraq? Reducing U.S. military casualties? Saving Iraqi lives? Preventing further chaos in the region?

The purpose of these questions is to underscore that the answers do not flow naturally from prior positions on Iraq. It is possible to have staunchly opposed military action in Iraq and today have severe doubts about a precipitous American withdrawal. Similarly, it is conceivable that bomb-Baghdad hawks could now concede that the situation is unsalvageable and favor prompt American withdrawal. At a point when virtually everyone in public life is a hard-liner one way or another on Iraq, 2007 is the moment to add some long-missing nuance to the public debates over this military disaster.

While a potent segment of the Republican Party probably will never abandon its doctrinal devotion to tax cuts and minimal government regulation, it is worth asking anew what Democrats stand for in domestic policy beyond opposing GOP rigidity. Should the Democrats' primary goal be taming the Bush deficit, providing universal healthcare coverage, lessening economic inequality or keeping unemployment and inflation in check? Many of these choices (such as opting for universal healthcare or deficit reduction) are mutually exclusive.

These conundrums are not abstractions now that the Democrats have a say in economic policy and spending decisions in Congress. To govern is to choose -- and, up to now, the unyielding nature of the Bush regime has freed the Democrats from the necessity of grappling with priorities. It is fine to support stem-cell research, an increase in the minimum wage and enhanced economic aid for college students (all major elements of the 100-hour legislative program of House Democrats under Nancy Pelosi). But linking together a few politically popular federal initiatives is not a long-term governing philosophy.

These are questions that cannot be separated from the 2008 presidential campaign. Actually, with the crazily accelerated calendar for presidential primaries and caucuses, the nomination fights in both parties may well be decided in just 13 months -- making 2007 as pivotal a campaign year as 2008.

But so far -- with John Edwards' emphasis on domestic poverty the conspicuous exception -- the White House contenders in both parties are saying little that is fresh or stirring. Yes, of course, it is still early. But six years of Bush-style rigidity has stifled the national debate on what comes next. As long as the answer to every question was either tax cuts or send in the troops, it was impossible to have a thoughtful debate on anything. That is why the promise of 2007 may lie as much in the realm of ideas as it does in any tangible legislation from Washington.