The Dems come marching in

Checks and balances return to Washington, but will the new Democratic majority be able to do anything to end the war in Iraq? 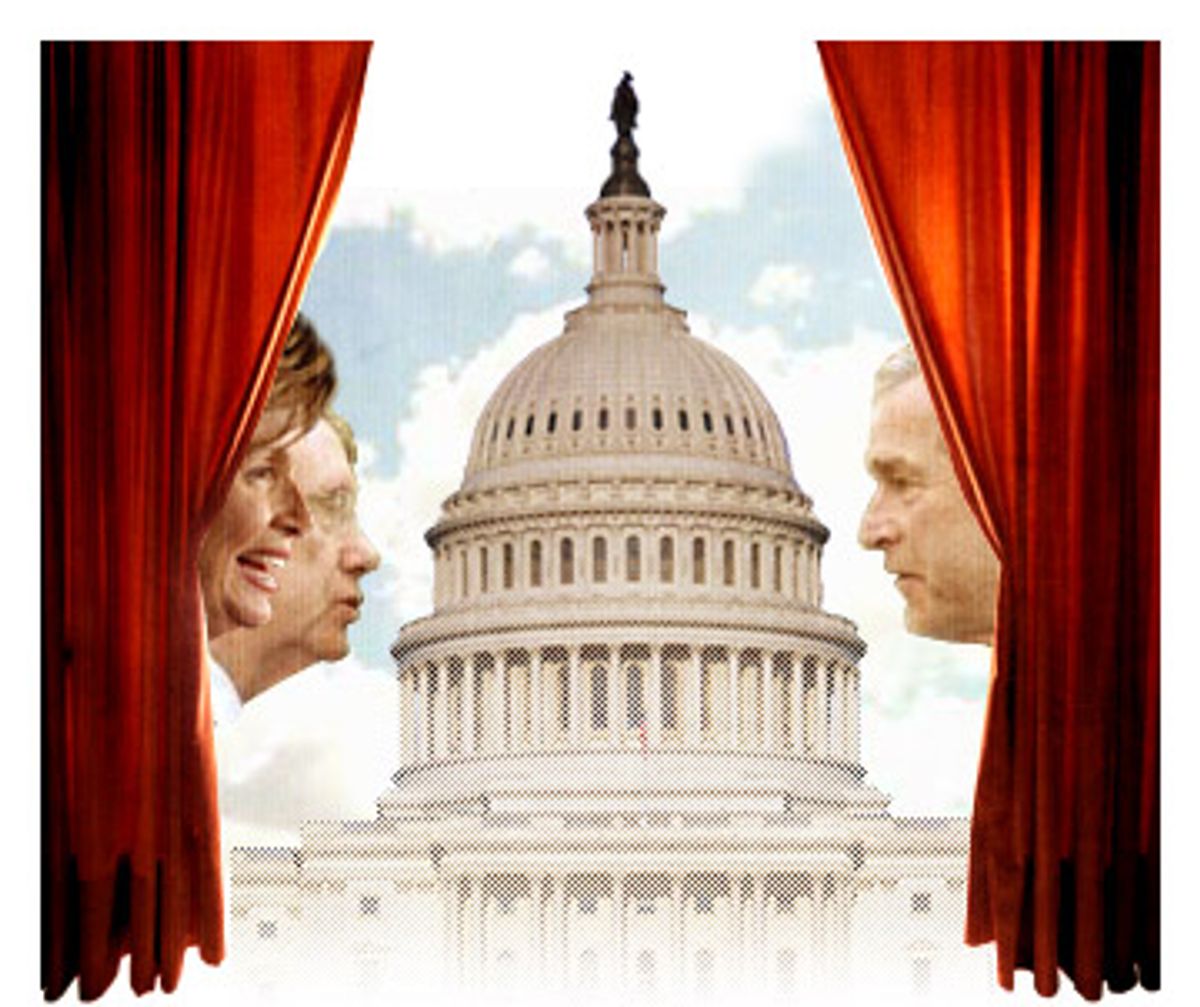 At noon on Thursday, after four years of lockstep one-party government, the United States will witness the dramatic return from exile of that twosome so beloved by the framers of the Constitution -- the never-to-be-forgotten duo of Checks and Balances. Thursday will also be the day when a form of address is used for the first time in 218 years of congressional history: "Madam Speaker" to refer to House Speaker Nancy Pelosi, ending an all-male line of succession dating back to the immortal Frederick Muhlenberg in 1789.

During a week already marked by a presidential funeral, the pomp on Capitol Hill will be tempered by circumstance, mostly the continual need for the 63 freshly minted members of the House and Senate to stop to pose for souvenir photos with their families and loyal supporters. Amid the celebratory welcome-to-Congress festivities, no group is apt to feel stranger than the 13 new Republican House members and the party's lone freshman senator (Bob Corker of Tennessee), all elected to vacant GOP-held seats. Given the Republican mood, these 14 new GOP recruits may feel like the last class of executive trainees who signed on with Enron.

Make no mistake, defrocked House Speaker Denny Hastert and the Republican leadership team certainly earned their passage to political purgatory. A lopsided 61 percent of all voters, according to a CNN poll released this week, believe that it "will be good for the country" for the Democrats to control Congress. That gives a hint of the hopes and the challenging expectations that rest with Pelosi and Harry Reid, her Senate counterpart (by a shaky 51-to-49 vote margin with South Dakota's Tim Johnson still hospitalized after emergency brain surgery).

The aggressive, middle-of-the-road architects of November's Democratic sweep remain near the center of Capitol Hill politics. Rahm Emanuel has been promoted to chair the House Democratic Conference and Chuck Schumer has volunteered for another term at the helm of the Senate campaign committee. What this means -- particularly in the House where the class of '06 faces a rendezvous with the voters next year -- is that reelection remains the Democratic touchstone.

Chris Murphy, who defeated septuagenarian Republican Nancy Johnson in the northwestern corner of Connecticut, reflected the mood of the House freshman when he said Wednesday, "We all have different ideological backgrounds, but there's a pragmatism that binds this class. If there is one thing that was a feature in all our races, it was a sense that we're being sent here to make Washington work again. There are a couple of issues that we have to deliver on -- Iraq and healthcare probably at the top of the list."

As part of Pelosi's "100 Hours" plan -- the ballyhooed legislative schedule that will dominate the House until Bush's State of the Union Address late this month -- Murphy will have his moment before the footlights as he helps present the Democratic plan to reduce drug costs under Medicare. While Bush may veto the bill (which mandates that the government negotiate with the pharmaceutical industry to lower prices), this is the kind of legislation that could never reach the House floor as long as the Republicans (and the lobbyists) tightly controlled the agenda.

Iraq, of course, will be infinitely trickier for the Democrats. When Emanuel emerged Wednesday from the Democratic caucus to brief reporters in the Capitol, he began, "Twelve years ago, the Republicans said they came to Washington to change Washington. What happened was that Washington changed them." Before he could get much further, antiwar activist Cindy Sheehan and a group of protesters emerged from a gaggle of reporters to shout at Emanuel, "De-escalate. Investigate. Troops home now." As Emanuel soon abandoned the press conference in frustration over the rowdy demonstration, it seemed that the Democratic majority was being blamed for the war that it had been elected to oppose. And the 110th Congress had not yet even convened.

This may have been an extreme case, but there are both political and legislative limitations on how much the congressional Democrats can do to reshape Iraq policy. Bush as commander in chief has unquestioned legal power to redeploy troops to create a temporary surge in U.S. forces in Iraq, the centerpiece of the president's strategic rethinking expected to be unveiled next week.

Democrats could challenge this policy with a symbolic sense-of-the-Congress resolution (which would be taken about as seriously by the White House as Kofi Annan's farewell message) or they could balk at paying for the additional troops through the spending process. This form of surge protection (blocking an explicit presidential budget request for the additional troops) is beginning to receive some serious attention from top Democratic strategists. It is very dicey politically to oppose war appropriations (recall John Kerry's haplessly defensive, "I voted for it before I voted against it") because such a stance can easily be pilloried in 30-second attacks ads as a failure to support the troops.

But, in all likelihood, the new majority party's major role in the Iraq debate will be through congressional hearings and oversight. Long-shot presidential contender Joe Biden, the new chairman of the Senate Foreign Relations Committee, is planning to respond to the upcoming Bush Iraq speech with a hard-hitting round of hearings featuring Secretary of State Condi Rice. With incoming House committee chairmen such as Henry Waxman already poised to investigate war profiteering, many under-reported and undiscovered scandals of the Bush years may soon dominate the headlines thanks to that magical power only available to congressional majorities called the subpoena.

This is a week for Democratic triumphalism, especially in the House, despite the pitfalls ahead. After a dozen years in the wilderness, after Republican claims of a permanent Sunbelt-dominated majority, after cynical GOP redistricting and profiteering, after endless symbolic votes on flag burning and prayer in the schools, after snarling charges of being soft on national security, the Democrats will again be wielding the gavel instead of vainly shouting for attention. While it is not the White House, the advent of the Pelosi and Reid era on Capitol Hill means that those who fear unbridled executive power in an age of terrorism can now look confidently to Congress rather than merely gazing prayerfully at the Supreme Court.

With additional reporting by Michael Scherer