Dems to GOP: "I feel your pain"

After 12 years of Republican control, Nancy Pelosi assumed her historic role as the first ever Madam Speaker. She promised the GOP "partnership" -- but not quite yet. 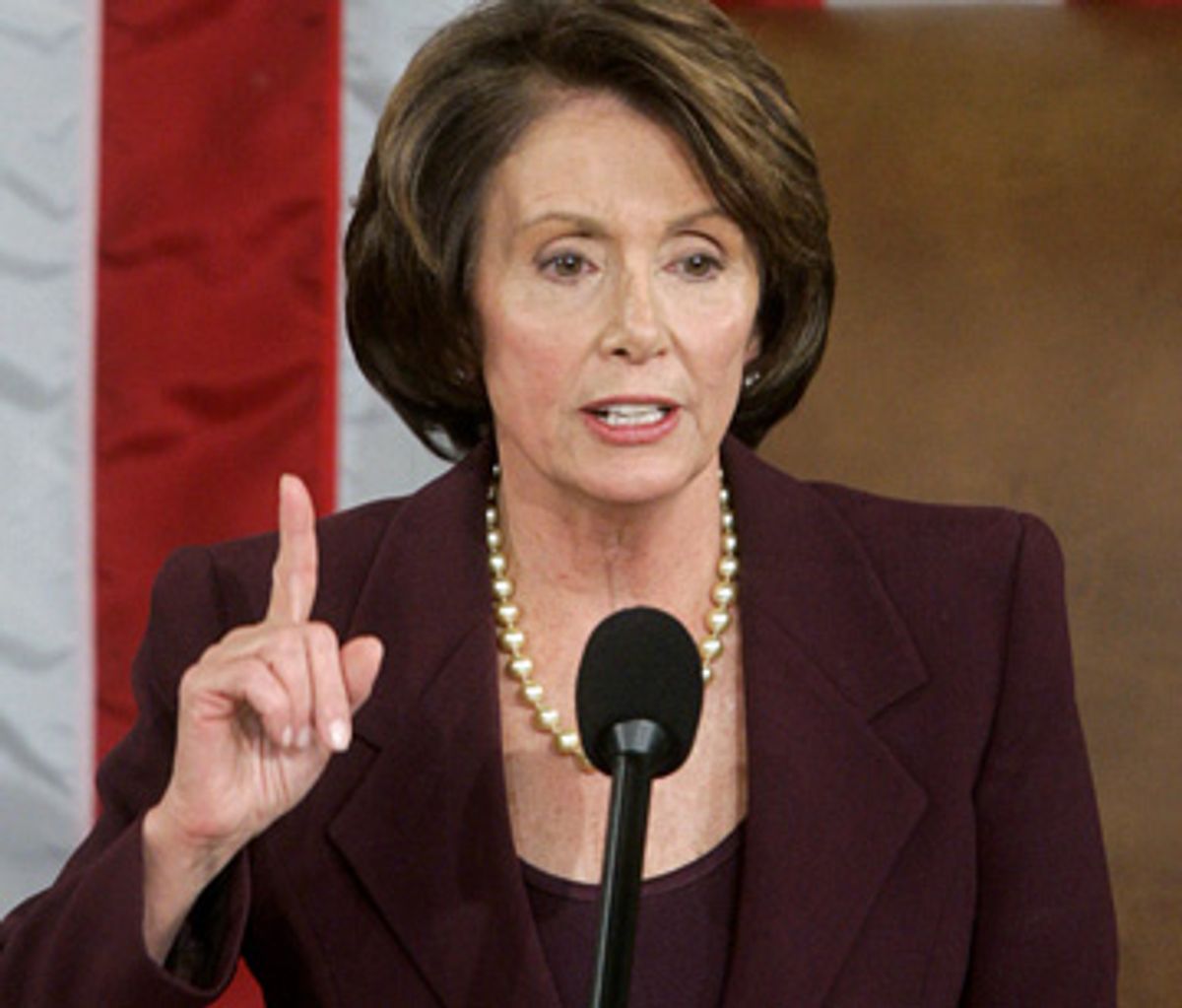 Like a rare winter blossom, the fresh feeling of bipartisan cooperation sprouted briefly on the floor of Congress Thursday afternoon. "My fellow Americans, whether you are a Republican, an independent or a Democrat, today is a cause for celebration," announced Ohio Rep. John Boehner, the new Republican minority leader.

He was congratulating his Democratic foe, California Rep. Nancy Pelosi, on winning the 2006 elections. Before him was a packed room that included all 435 members of the House, dozens of their cherubic children, and esteemed dignitaries like the singer Tony Bennett and the actor Richard Gere, who fingered a string of Buddhist prayer beads in the gallery. The mood was light, especially on the Democratic side of the aisle, where cheek kissing and backslapping were in order. A new day was dawning. A new Congress was set to begin. "Republicans and Democrats can disagree without being disagreeable to each other," Boehner predicted hopefully.

After he was done, Speaker-elect Nancy Pelosi, the first woman to reach the pinnacle of congressional power, took the podium. As on election night, she was dressed in a purple suit, an apparent symbol for the union of red and blue America. "I accept this gavel in the spirit of partnership, not partisanship," the San Francisco Democrat told the assembled crowd. "We have an obligation to reach beyond partisanship, to work for all Americans."

Then, just as quickly as it had blossomed, the flower of comity died. Not four minutes after Pelosi had finished her speech to thunderous bipartisan applause, Republicans could be heard booing and hissing at their Democratic foes across the aisle. The cause was a parliamentary inquiry, filed by New Jersey Democrat Rush Holt, to ensure that Congress has the ability to overturn the results of a Florida congressional election in which 18,000 votes had mysteriously not been recorded. The problem has been referred to a panel of congressional investigators, even as the current victor, Republican Vern Buchanan, was sworn into office.

From there on in, everything went downhill and both parties went into battle mode. When the children and dignitaries had cleared the room, Democrats introduced their first bill, an ethics package that would ban gifts from lobbyists, limit privately funded travel, and close a loophole that gives members of Congress cheap access to corporate jets. Rather than debate the merits of the bill, Republicans objected to the fact that Pelosi had decided to prohibit their amendments, apparently reversing a pledge she had made before the election. North Carolina Rep. Patrick McHenry, a pugnacious 31-year-old Republican, charged that Pelosi was ramming the bill "down the throats of all members."

"The much ballyhooed commitment to minority rights is virtually nonexistent," complained Rep. David Dreier, who as Rules Committee chairman since 1999 had overseen a never-ending Republican effort to curtail Democratic powers to amend legislation. "Promises were made, and they are not being kept," Dreier continued, in his newly discovered role as a champion of parliamentary fairness. "That is the thing that I find most troubling."

A few minutes later, New York Democrat Louise Slaughter, the new chairwoman of the Rules Committee, appeared to be taunting her colleague. "I feel your pain," she said. "I understand your hurt."

"I never used the word 'pain,'" Dreier shot back. "I never said 'hurt.' I said 'disappointed.'" He pointed out that Republicans had not even been given 24 hours to consider the ethics reform proposal, though it was made up of proposals that had been widely discussed in recent months. Even when he tried to submit for the record a time-stamped copy of the legislation proving this point, Democratic Rep. Alcee Hastings of Florida raised temporary objections. At another point, Dreier asked that one of his motions be read in full. Democrats tried to object, but he insisted on eating into the Democrats' time.

The downward trajectory of the day reflected a key dilemma for Democrats as they find themselves with congressional power for the first time in 12 years. Though Pelosi has promised "the most open and honest Congress in history," the practical requirements of running the House do not work in her favor. The basic rules of congressional power remain unchanged. On Thursday night, for example, Pelosi hosted a party for hundreds of lobbyists, supporters and corporate campaign contributors at the National Building Museum several blocks away. Even as she attempts to "drain the swamp" of Washington corruption, she has found it necessary to fill her own cisterns with campaign cash, at a reported cost of $1,000 per individual and $15,000 per political action committee.

Similarly, Pelosi's determination to make significant strides in the first 100 legislative hours of Congress has led her to back off on her pledge to treat the minority party with more fairness. As a result, Republicans are sure to spend the next week inveighing again and again against the apparent hypocrisy of the new speaker. The 100-hour campaign pledge, which will include reforms in ethics, corporate taxation, student loan rates and the minimum wage, was designed to one-up Republican Newt Gingrich's promise in the 1994 election for a slate of new laws in the first 100 days of Congress. "I wonder if they are coming to regret it," observed Thomas Mann, a congressional scholar at the Brookings Institution, during a panel discussion on Wednesday. "That isn't the story line they wanted, but it was certainly predictable."

Both inside and outside the House chamber, the first day of Congress has all the trappings of the first day of college. Traffic jams surrounded the Capitol as everyone arrived. Members filed into the Speaker's Lobby, a long fireplace-laden space just off the House floor, to stand in line by last name for manila packets that contained their congressional pin and voting cards. Hundreds of well-wishers lined up outside the House office building to witness the swearing-in ceremonies of their local representatives. The young children and grandchildren of politicians, a rare sight on most days, scampered about everywhere, including the House floor. At one point, Pelosi found herself on the floor surrounded by no less than seven young tykes, including a toddler she held in her arms.

By the time she rose to address the chamber, age-old partisan divisions were already evident in the pistonlike motions of members offering their standing ovations. When Pelosi announced that the American people were demanding a "new direction in the war in Iraq," the Republican caucus stayed in their seats, while the Democrats leapt up in applause. When she promised to "combat climate change," only about a third of the Republicans joined the Democrats on their feet. When she declared that Democrats would allow no new deficit spending, the Republicans stood only after a noticeable hesitation. The former speaker, Republican Dennis Hastert of Illinois, did not bother to work out his legs at all, choosing to applaud halfheartedly from his seat.

Earlier, the House clerk had read off a traditional verbal roll call to determine Pelosi's election as speaker, a process that took more than an hour. Each vote was recorded with a different ceremonial pencil, emblazoned with the colors of the American flag. As they announced their votes, Democrats called Pelosi, 66, the "pride of San Francisco," "the young lady from California," and "the conscience of America." Rep. Jesse Jackson Jr., a Democrat of Illinois, evoked the names of Rosa Parks, Harriet Tubman and Jesus before casting his vote for speaker. Others invoked "the children of Katrina and Darfur" and the "Ohio State Buckeyes," a football team set to play for the national championship on Monday. As expected, Pelosi won the job with 233 votes, one for every Democrat in the House.

Up in the gallery, the coolest man in the room, the octogenarian Tony Bennett, occupied himself throughout the proceedings by sketching the House floor with a fine black pen and a small notebook. Afterward, the man who first recorded "I Left My Heart in San Francisco" reluctantly displayed his impressive handiwork to curious reporters. When asked for his thoughts on Pelosi, he beamed, "I think she is just the best thing that's ever happened."

No doubt there are many members of Congress, all of them Democrats, who agree with Bennett. But 202 Republican members made it clear on Thursday that there are no real honeymoons in politics. No matter what the rhetoric of the first few hours, the 110th Congress is sure to be a bitter and protracted battle. Pelosi may have taken the speaker's gavel in the spirit of partnership with Republicans. But for the first 100 hours, partisanship is what she has offered, and partisanship is what she will get.