After 50 years in Congress, John Dingell's passion for oversight is undiminished. The Bush record, including the botched Drug Plan, offers him no shortage of investigative opportunities. 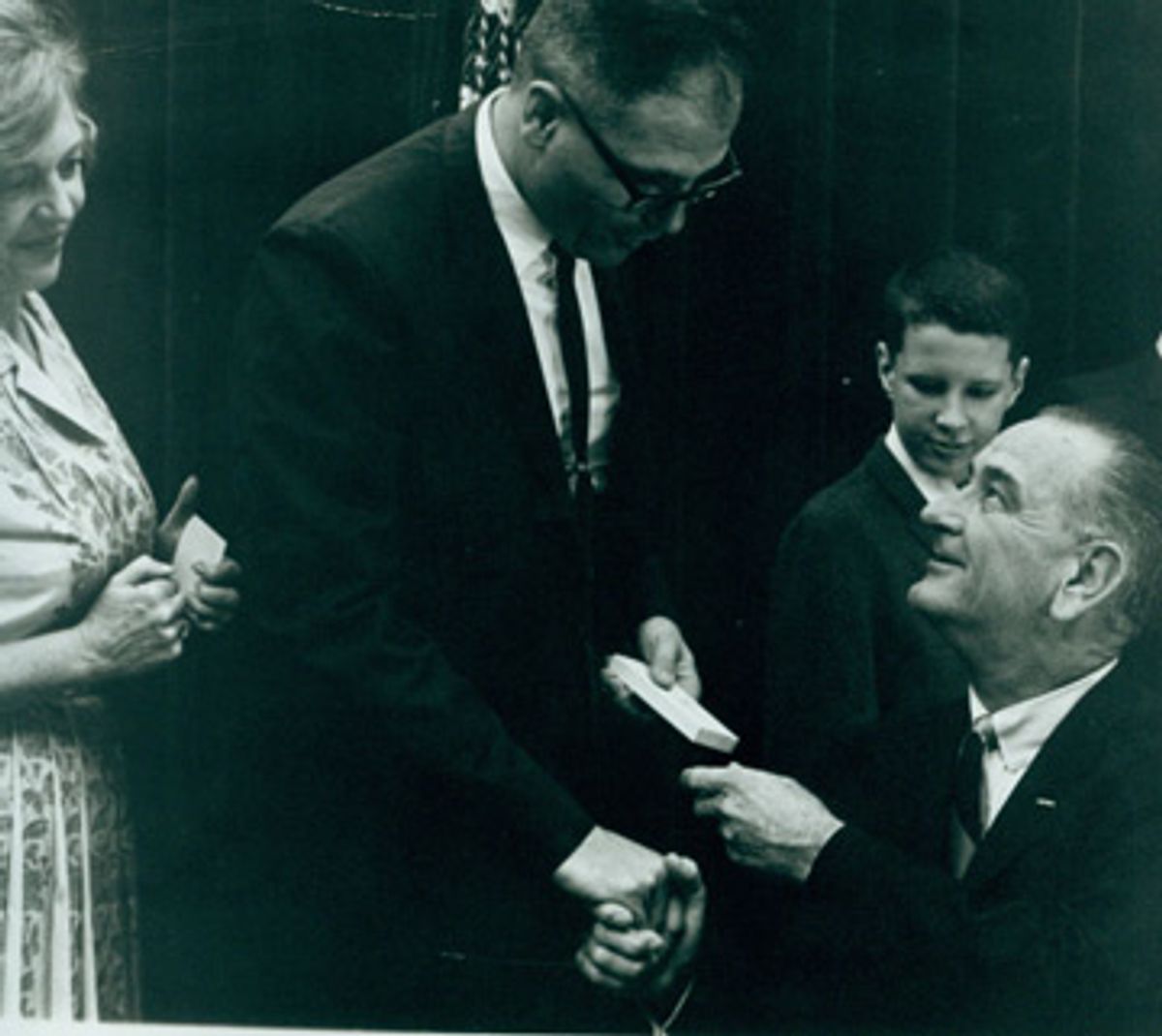 From Capitol Hill to the White House, those who make history operate in different realms from those who have lived it. Then there is 80-year-old Michigan Democrat John Dingell, now in his near-record 51st year in Congress, who is the most conspicuous exception to this Washington truism.

Dingell's lengthy career makes Dick Cheney (once Jerry Ford's White House chief of staff) seem like a political whippersnapper. Not only was Dingell presiding over the House when it passed the 1965 Medicare bill (see photograph above from Lyndon Johnson's White House signing ceremony), but he also authored or coauthored such landmark legislation as the Endangered Species Act (1973) and the Clean Air Act (1990).

Yet the veteran legislator is neither a stuffed congressional museum piece like the late Strom Thurmond nor a lonely Cassandra-like figure akin to Robert Byrd invoking Roman history as he warned of the folly of the Iraq war, a conflict that Dingell also opposed. After 12 years in the wilderness under the Republicans ("Hell, there was no legislative process in this place," he recalls with pain), Dingell is back at the helm of one of the most powerful congressional bodies, the House Energy and Commerce Committee, which in some years deals with as much as 40 percent of the legislative workload.

"Dingell continues to have a real zest for the job," marvels political scientist Norman Ornstein, a veteran Congress watcher at the American Enterprise Institute. "He even had it when the Democrats were in the minority. He's sharp; he has all his faculties. And even though Dingell has mellowed, he's still tough as nails."

For all the attention lavished on Speaker Nancy Pelosi (first elected in 1987) as the personification of the new Democratic era, she must share power with an earlier congressional generation of barons who rule the major committees. Along with Dingell, they include such patriarchs as Dave Obey (elected in 1969) on Appropriations and Charles Rangel (1970) at the tax-writing Ways and Means Committee. A top Democratic strategist who works closely with Congress wonders, "Will Nancy strategically align herself with the younger members, the newly elected? Or will she yield to the committee chairmen, almost all male, who had been there for a long time before she was elected?"

During an interview in his office just before Christmas, Dingell took pains to stress that he understood how Congress and the external political environment had changed since he first ran the Energy and Commerce Committee in 1981, during an age of seemingly perpetual Democratic House majorities. No longer can Capitol Hill Democrats, conscious of their narrow majorities, let chairmen run their committees as personal fiefdoms, oblivious to the party's political image. "I think there is a great sense around here of the need for more discipline," Dingell said, "so the independence of senior members like me will be constrained. I think we will have to lead rather than order."

As the senior member of the House, Dingell formally swore in Pelosi as speaker during Thursday's festivities, just as he had performed the same function -- with heavier heart -- at a similar ceremony for Newt Gingrich in 1995. In the past, though, relations between Pelosi and Dingell, an old-fashioned New Deal lunch-bucket Democrat, have been frosty. In 2002, when a mischievous Michigan Republican redistricting plan put Dingell in the same suburban Detroit district as left-wing Rep. Lynn Rivers, Pelosi sent a $10,000 check to Rivers. Dingell won the primary with 59 percent of the vote in his only hard-fought reelection battle in 40 years.

In recent weeks, however, Dingell and Pelosi have worked through intermediaries to repair their relationship. When we talked in late December, Dingell repeatedly went out of his way to praise Pelosi and sounded sincere as he said, "Nancy is going to do a fine job, don't worry. We will do anything to help her. The party is much more united than it's ever been."

Well over 6 feet tall, though stooped with age and dependent on a cane, Dingell still exudes a bearlike presence. An avid hunter -- whose opposition to most forms of gun control once enraged litmus-test liberals but endeared him to his blue-collar constituents -- Dingell is overshadowed in his own Rayburn Building office by three large horned trophies on the wall (two caribou and an elk). Seated in a side chair, with the sleeves of his blue dress shirt rolled up, Dingell alternated between affectionate reminiscences of the past and sharp observations about the present.

Asked who his favorite House speaker was, Dingell skirted the 1980s (when Tip O'Neill symbolized House Democrats) to conjure up the distant past as he said without hesitation: "Rayburn." For almost everyone else in the House, Sam Rayburn is a faded figure from the pages of history, a deal-making Texan and ally of Lyndon Johnson whose name now adorns a House office building. But to Dingell, Rayburn was a speaker who knew how to control 435 fractious members and whose word was his bond. (Rayburn was also the man who rewarded Dingell with a coveted seat on the Commerce Committee shortly after the 29-year-old was elected to the House in late 1955 to replace his father, who had died in office.) Speaking reverently of Rayburn, Dingell said, "He was a very small man, but he had a presence that made him seem 11 feet high. I remember when I voted against him, he'd sit there in the chair and look down at me, and the look he gave would melt the buttons on my cuffs."

As a committee chairman, Dingell himself had a reputation for giving those kind of looks to recalcitrant witnesses. And the Bush record certainly provides a tempting array of investigative opportunities. "There are so many areas that have not been looked at during these 12 years that we're going to be well-occupied," he said. The now and former chairman then spent the next two minutes gleefully rattling off some of the abuses that have aroused his attention. A fan of Gilbert and Sullivan (their 19th century light operas are on his iPod, along with classical music and a wide selection of civilian and military marches), Dingell recited his little list of administrative problems that will not be missed, an investigative agenda for the Commerce Committee that -- believe it or not -- has been edited for brevity:

"Medicare, which is a thorough-going mess, and Part D [the new prescription-drug benefit], which is intolerable. Huge subsidies to the insurance companies, massive problems with drug pricing, and a bad and unfair and unduly complicated piece of legislation ... We have drug safety and food safety to worry about ... Medicare and Medicaid fraud. The fact that a lot of statutory policies aren't being adhered to. A terrible mess at DOE [Department of Energy] in terms of nuclear-waste storage. The nuclear-waste trust fund has been dissipated in all sorts of scandalous and outrageous ways. And that's just a small part of the business that's before us. Look at EPA and see how their contractors are doing. They were famous for cooking their results, and I'm satisfied that they're cooking their results again. That has to be looked at. We have security at the government labs -- we're getting ready to get into that."

Then, and only then, did Dingell reach the crescendo when he said with wry understatement: "We have a wonderful world in which to inquire."

But after five decades, John Dingell -- first elected to Congress in the bygone year when the Brooklyn Dodgers won their only World Series -- has been around the political game long enough to know something about the arrogance that fatally undermines victory. Referring to November's Democratic sweep, he cautioned, "People talk about this being the beginning of a long-term contract. No, it's an audition. We have a chance to prove to the people that we're entitled to this job. And I hope we don't screw it up."