To grandmother Pelosi's house we go

More power to the first female speaker for using her grandkids as props. But what's Jim Clyburn's problem? 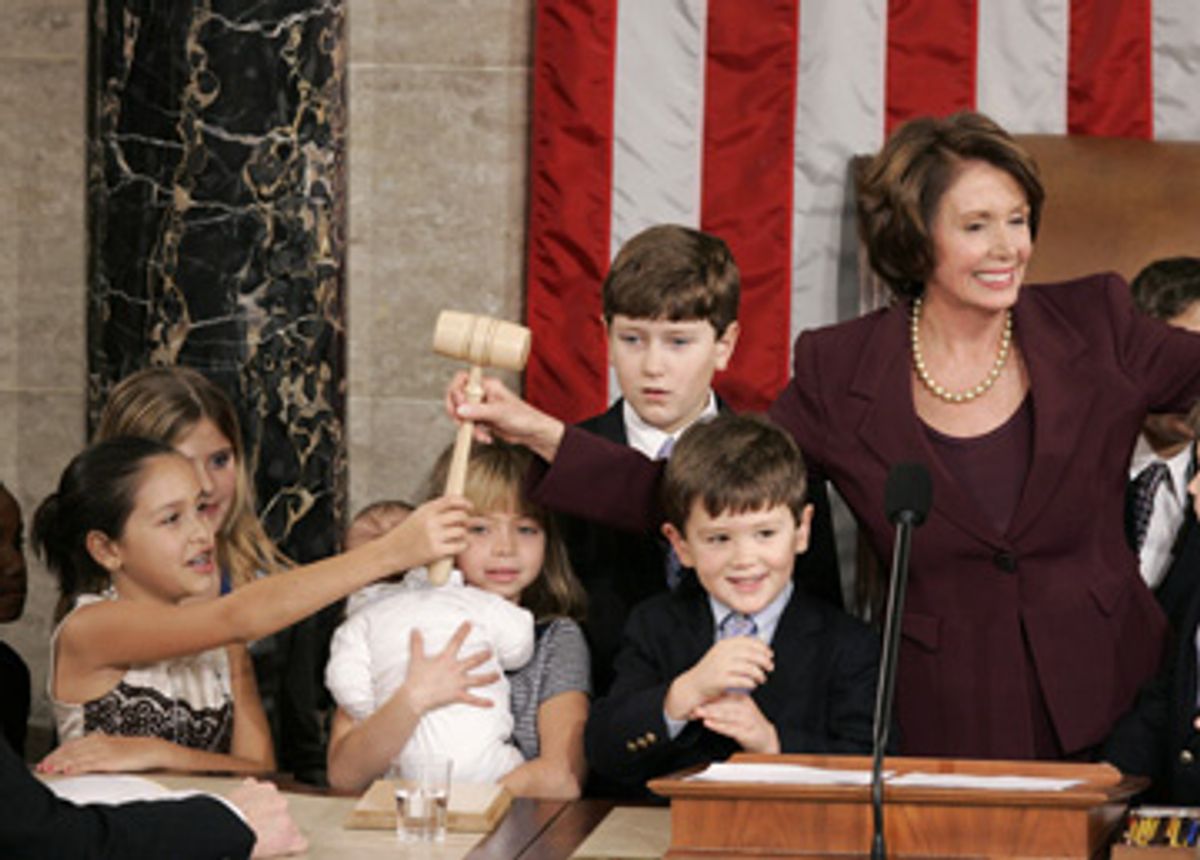 It is unsurprising that the two most potent acts of political symbolism during last week's official Democratic takeover of Capitol Hill came from a white woman and a black man. Nancy Pelosi, first woman speaker of the House and, as Wonkette so perfectly put it, a mere two indictments away from the Oval Office, filled the well of the Congress with children. If congressional kids are anything like mine, members will be finding Hot Wheels, snotty Kleenex and half-gnawed pb&j's in their overcoat pockets for weeks. Still, whether it's true that it was an impromptu "Italian grandma" gesture in response to repeated squeals to touch the honored speaker's gavel, or a canny, cynical political stunt, it doesn't matter. It was perfect.

Infant grandchild in one hand, herding five more with the other, nattily dressed nanny discreetly within hand-off distance, the new speaker was the picture of the kind of woman with whom America ought to feel an immediate affinity. The daughter of a political dynasty and a longtime party insider, Pelosi ignored her own electoral urges until the youngest of her five kids was a senior in high school and all but ordered Mom to go for it. ("Get a life" was what the angelic teen said when Pelosi broached the subject.) Pelosi was 46. Because of my own ambivalence about motherhood, I have something near reverence for this type of female selflessness, whether forced on her by custom and family pressure or freely chosen. Pelosi proves that women can have it all. Just not all at once. And also that motherhood doesn't have to calcify your spirit, your brain, your looks, your intellect or your drive.

I began my college career at community college in the late 1970s and my only competition there was housewives rejoining the world after raising their kids. They were focused, organized and calm no matter what the professors, the weather or the campus cops threw at us. They also always had extra tampons, change for the meters, and snacks in their purses. In the same way that I look to flight attendants for reassurance in turbulent weather, I looked to those moms to see if the term-paper particulars flustered them. If they didn't (and they never did), I just took a deep breath and stalked them for pointers. As one told me once as I moaned over the syllabus, "Three kids with chicken pox and a husband on the night shift is hard. Five double-spaced pages on Maslow's Hierarchy is just typing."

Far be it from me to reduce Nancy Pelosi to merely the sum of the carpool miles she drove, but it took an extraordinary woman to do that and move on to become speaker of the House. To object to Pelosi's inclusion of children in politics is to presume that an erstwhile stay-at-home mom brings nothing with her to public life from that experience, that she gained nothing from it, that child rearing is mere baby sitting, only keeping children alive till they can take care of themselves. In fact, it is an art and a science and it changes you. It grows you up. At a minimum, it teaches you just how many supposed grown-ups only need a good, long nap to be decent neighbors and co-workers.

Every time I hear of Pelosi's threat to use her "mother of five" voice to quiet ill-behaving alpha males on the Hill, I look for someone to high-five, even though Salon's own Broadsheet has expressed mild queasiness at the tactic and the mind-set behind it. Sports metaphors, but no invoking of the lessons learned from an experience that is the great leveler among women the world over? Washington, D.C., my adopted hometown, is nothing so much as High School Hell, a playground for overgrown, over-indulged, sneaky, backbiting children who need a good spanking and a looooong time out (another 12 years sounds about right). There's no doubt that Pelosi is a canny politician, but I applaud her for wearing her motherhood so proudly and sending the message that career women can include children in our professional lives. It's risky, but so is motherhood.

As happy as I was about the way the first female speaker took charge, however, I was ambivalent, trending toward annoyed, about the symbolism chosen to represent the black ascent to power. Without a doubt, this one was carefully considered and engineered. Incoming (black) House Majority Whip Rep. Jim Clyburn, D-S.C., chose not to receive the ceremonial whip -- an actual leather horsewhip -- from the outgoing (white) whip, Rep. Roy Blunt, R-Mo. Instead, he preferred to receive it from former Rep. William Gray, who had become the first black majority whip in 1989. Massa and the whipping post, you understand.

As this bit of blackface kabuki was taking place in D.C., I was rereading David Levering Lewis' exquisite W.E.B. DuBois: Biography of a Race 1868-1919. I came across this passage about DuBois' habit of carrying a cane while he walked the grounds at Atlanta University, the all-black school where he was a professor: "[J]auntily wielding his walking stick about campus, [DuBois] was oblivious to the fact that many of the high school students and even a few of the older ones backed away or reflexively flinched when he approached." Some of the students from the rural South, it was finally explained to DuBois, "were used to the white folks using canes" on them.

DuBois might well be surprised that more than a century later, blacks are still flinching from the tools of subjugation. Tools that have been silenced for a generation, and have now been confiscated. For once, I'll choose my words carefully and just say that Clyburn's squeamishness strikes me as overwrought. And wrong. Clyburn doesn't seem to understand what it would have meant to grab that whip from Blunt. What could be a more official, public, international castration than the Man having to voluntarily hand his pecker to a brother in ignominious defeat? Doesn't Clyburn know whom he's going to be whipping? The Man, that's who! Personally, I'd love to have 10 minutes with that cowhide and my neatly alphabetized list.