In the hours before Bush announces his new war plan, members of the Armed Services Committee -- and the press -- play a waiting game. 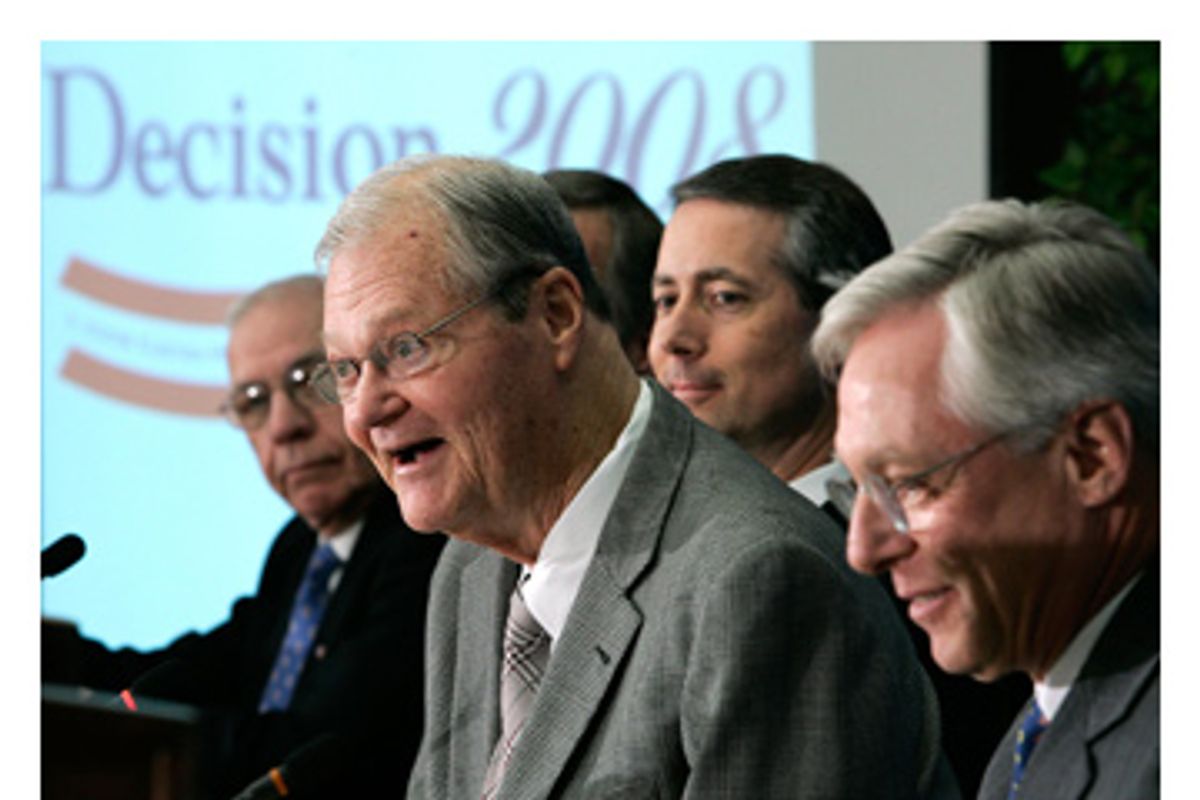 Even in the nation's capital, you know something is afoot when hundreds of people and 15 cameramen from separate news outlets spend their lunch hour watching four congressmen talk in the basement of a think tank. "Our timing is unusually fortuitous," acknowledged John Hamre, the president of the Center for Strategic and International Studies, as he welcomed the horde of spectators on Monday.

The crowd had ostensibly gathered to hear two Democrats and two Republicans from the House Armed Services Committee talk about the Iraq war. But everyone was really interested in finding out about the plans of President George Bush, who was at that moment five blocks away, meeting in the Oval Office with the secretary of education. The nation will have to wait until Wednesday night for the president to announce, on prime-time television, his "new way forward" for Iraq, a plan that will reportedly include a "surge" in troops.

In the meantime, the Washington press corps had to settle for the ruminations of a think tank panel. The congressmen did their best to calm everyone down from their pre-announcement frenzy. "What we need is patience," cautioned Rep. Jim Marshall, a moderate Democrat from Georgia who earned two Bronze Stars and a Purple Heart in Vietnam. "I would simply ask and suggest to the president, 'Tell the American people that this is going to take some time. We can do this.'"

Missouri Democrat Ike Skelton, the new chairman of the House Armed Services Committee, similarly tried to put Bush's coming announcement in context. He said he doubted that escalating troop numbers, which was tried as recently as last summer, would have much effect either way. Victory or defeat, he said, would be determined by the Iraqis. "A great deal of hype has been made," Skelton said. "Let's not put any more spotlight on this decision than those of the past, which sadly have not been good ones."

A reporter for the San Francisco Chronicle took the microphone to ask whether Skelton could foresee Congress using its spending power to cut off funding for the war. He was referring to Speaker Nancy Pelosi's weekend gauntlet toss on CBS's "Face the Nation": "If the president wants to add to this mission, he is going to have to justify it."

Skelton's answer left room for interpretation. "We're not about to cut off funding for troops," he said. "We know that. That would be injurious to our troops and their families." He did, however, say that Democrats would provide rigorous oversight to the president's war plan, and he did not rule out the possibility of using "limitation type of language" in legislation to try to influence the war plan. When asked what "limitation type of language" meant, he dodged. "Let's see what, if anything, the president says," he said.

The Republicans on the panel spent their time bemoaning past mistakes while reminding everyone of the danger of withdrawal from Iraq. Rep. Mac Thornberry, of Texas, went so far as to warn his colleagues that they were helping the enemy by criticizing the president's plan. "The press releases that we send out, the letters we send out, the votes we cast, are part of the struggle," Thornberry said, an analysis that nearly posited some of his House colleagues as unwitting traitors. "It just seems to me that Congress cannot win this struggle on its own, but Congress may very well be able to lose it on its own."

Republican Rep. Jim Saxton, of New Jersey, seconded that notion. "It's about how to attack the will, or how to affect the will of your enemy," he said of the insurgency's goals in Iraq. To put the war in further context, he compared the struggle in Iraq to the U.S. Civil War. In that war, too, he noted, the initial rationale and the tactics had to change over time. Abraham Lincoln had not at first declared the goal of ending slavery, and Gen. Grant realized late in the conflict that it was best to conduct bloody frontal battles in open fields. "It was a learning situation," he said.

Since the setting was a think tank, most of panel thought it appropriate to recommend good books to read. Saxton said he discovered the Civil War parallels by rereading Bruce Catton's 1955 history, "This Hallowed Ground." Saxton and Thornberry said they were fans of "The Sling and the Stone," an analysis of insurgent warfare by Thomas X. Hammes. Thornberry also praised Tom Barnett's book, "The Pentagon's New Map," which goes so far as to suggest creating a separate peacekeeping force within the military. For his part, Marshall gave a full-throated endorsement to "Non-Zero," a 2000 book by Robert Wright, who ominously warns of a end to civilization.

None of this, of course, did much to help the press corps, which was suffering from a lack of news just as the nation braced itself for the expansion of a unpopular war. In deference to Monday night's college football national championship game, the House of Representatives decided to take the day off. The political war of words had for a moment abated, but no one doubted that the lull was temporary. Massachusetts Democrat Sen. Ted Kennedy has scheduled a speech at the National Press Club Tuesday to "outline immediate actions Congress must take to reassert its constitutional power, protect our troops, and change the course of the president's strategy." On Thursday and Friday, new Defense Secretary Robert Gates and Secretary of State Condoleezza Rice are scheduled to appear before both the House and the Senate.

"Decisions in war and conflict should not be made in political context," Skelton said at one point, declaring a theoretical principle, not a reality. Politics is always present these days, even in the bowels of a think tank. The last question was given to a young man in the back of the room, a devotee of the perennial gadfly Lyndon LaRouche. "My question is, will the U.S. Congress take immediate action to impeach the vice president before there is an attack on Iran?" the young man asked.