In the early 1800s, Westerners leered at Saartjie Bartmaan's curvy body and exotic skin. But do we gawk any less today? 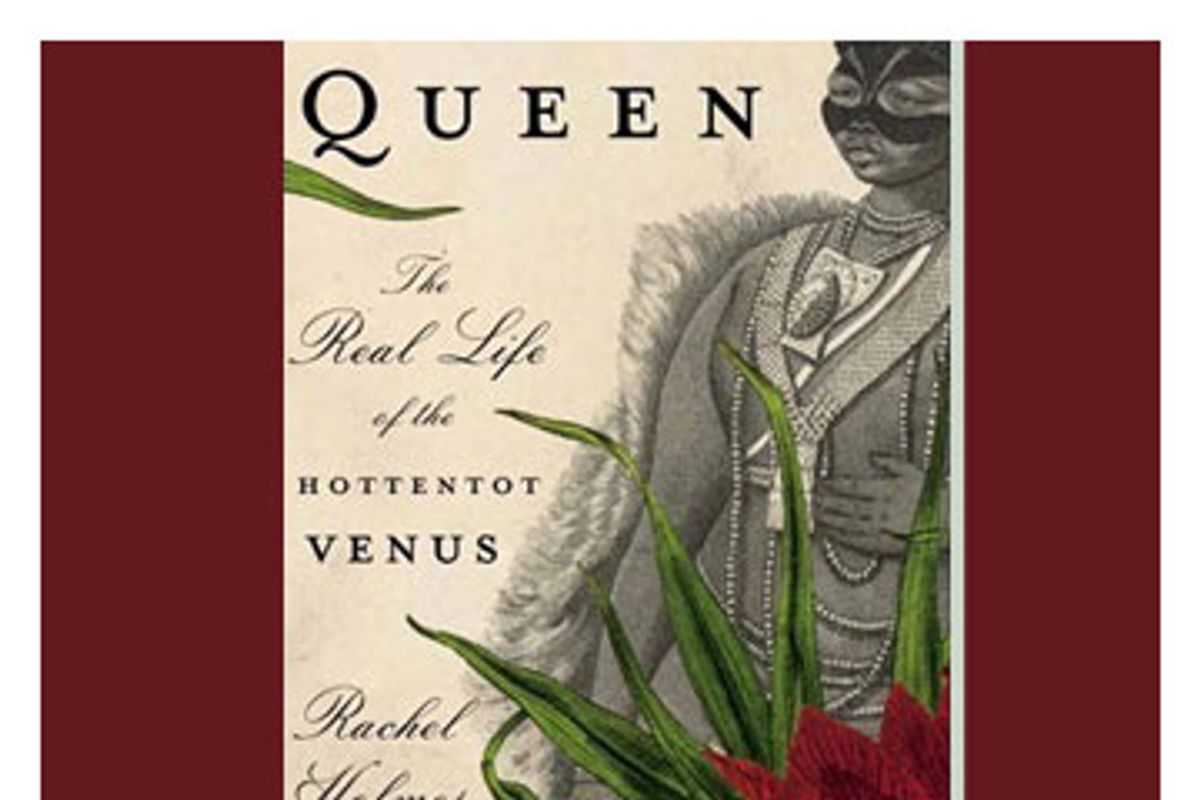 The life story of Saartjie Baartman, the African slave who was displayed in Europe in the early 19th century, contains so many layers of oppression to sort through that author Rachel Holmes begins by trying to untangle her name. In "African Queen: the Real Life of the Hottentot Venus," Holmes concedes that Saartjie (pronounced "Saar-key," meaning "little Sara") might not even be the name she was born with, calling the -tjie diminutive suffix a "racist speech act." Colonialist roots and all, it "was her name in life as she lived it."

Baartman was born into the Eastern Cape Khoisan, the indigenous herding tribe that once populated part of South Africa. As a teenager, she was orphaned after her father and fianci were both murdered in a colonial war, and sold to a trader, Pieter Willem Cesars. He took her to Cape Town, where she worked for his brother as a nursemaid. Around 1810, once the family started experiencing economic difficulties, they looked to Baartman as their next source of income, figuring that in Europe, where curiosity about the Dark Continent ran rampant, "a pretty maidservant with notable buttocks and a spotty giraffe skin were a winning combination on which to stake their future."

They settled in late Georgian London, where freak shows touting "the ne plus ultra of hideousness" or "the greatest deformity in the world" lined Piccadilly. As Holmes points out, England was transitioning from a sentimental primitivism -- the noble savage -- to the popular Victorian notion of ethnology. With the slave trade being abolished just a few years before and the black population of London at about 20,000, their challenge was to make the investment -- Baartman -- conform to stereotypes and yet also seem like a novelty. They marketed her as a kind of "scantily clad totem goddess," the Hottentot Venus, sex incarnate. Hottentots, what European traders called the native Khoisan for the clicking sound of their language, "signified all that was strange, disturbing, alien, and possibly, sexually deviant."

She was objectified in the most literal sense, put on display in front of gaping crowds six days a week, doing suggestive "native" dancing and playing African instruments. Her costume was a flesh-colored silk sheath deliberately cut like a second skin, with copious jewelry at the seams to conceal the fact that she wasn't technically naked. They also fashioned her a kind of female codpiece, "the effect of its soft folds, fur fringes, and pendulous extensions was to imply that its purpose was to modestly conceal the supposedly elongated labia of a Hottentot woman" -- a subject of great interest and speculation among the gawking masses. She became an instant sensation, a subject of countless life drawings (many of which are included in the book), editorials and political cartoons. The London Morning Post wrote, of her body, that "her contour and formation certainly surpass any thing [sic] of the kind ever seen in Europe, or perhaps ever produced on Earth."

Holmes is so clearly besotted with her subject that her writing can tend toward the florid when describing her ("to behold the figure of Venus, or to hear her name was to be prompted to think about lust, or love"). Baartman physically exists in the story -- the narrative is entirely devoted to her -- and yet, since she was unable to read or write, very little exists in her own voice. As her story progresses, that absence becomes more and more notable. But perhaps that's Holmes' point: As a slave and as a woman, Baartman never did have any kind of agency in her own life. "Economically, sexually, and racially," Holmes writes, "she was unfree."

Her supposed liberation at the hands of abolitionists, who initiated a lawsuit to win her freedom, feels like further commodification from a party interested not in her ultimate well-being, but in drumming up publicity for their own cause. It did earn her a contract, read to her twice in Afrikaans, that covered standard demands like medical treatment, warmer clothes, profit sharing and the promise that she would eventually be sent home. "She was not seen as a sympathetic victim," writes Holmes, who tries unsuccessfully at this point to sell Baartman as a cunning businesswoman who had "outmaneuvered her managers and made herself attractive to eligible bachelors as a woman of means."

And while there are a few years in England where she managed to escape the probing public -- she was rumored to have gotten married or had a baby, though there is no record of either -- the arguably most grim period of her life came after this so-called freedom. In 1814, she and Cesars moved to Paris at the end of the Napoleonic era, where she was examined for three days by scientists at the Museum of Natural History, developed an addiction to alcohol, and, at some point, became a prostitute. She died in Paris of either a respiratory disease or syphilis -- the records aren't clear -- at the age of 26. Her death didn't bring her any dignity, either; her body was cast and dissected and became the property of the Museum of Natural History. Her brain and genitals were kept in bell jars just outside one creepy scientist's private chambers.

Holmes devotes the last chapter to Nelson Mandela's campaign to have Baartman's remains returned to South Africa. It's a reverent coda to the book, but Holmes' own take on Baartman's legacy might have made a more compelling end to her story. Holmes never deviates from narrating the story, which she does capably, but her reluctance to write about why she's so moved by Baartman's life is ultimately our loss. It never moves beyond a hagiography, and therefore doesn't really add anything new or particularly timely. We're left to speculate about Holmes' motives -- her bio says she divides her time between London and Cape Town, and the book is steeped in feminist theory, take your pick -- but we're left with no explanation of why she felt so drawn to this project.

She does hint at a post-Baartman world, briefly quoting Josephine Baker -- "When it comes to blacks, the imagination of white folks is something else" -- and she mentions the popularity of the bustle among fashionable Victorians. Holmes imagines Baartman would have laughed at buttock augmentation, the fastest-growing cosmetic surgery in the U.S. and U.K. But what does she have to say about Queen's "Fat Bottom Girls" or Destiny's Child's "Bootylicious"? Now we can scoff at the clueless Valley Girls in the intro to Sir Mix-A-Lot's asstastic "Baby Got Back" ("I mean, her butt, is just so big. I can't believe it's just so round, it's like, out there, I mean -- gross. Look! She's just so ... black!"), but does it mean that we've come a long way? In the simultaneous lasciviousness and curiosity we've lavished on Jennifer Lopez's posterior, have we never stopped searching for that scantily clad totem goddess after all? We can pat ourselves on the back and feel disgusted by the story, and yet what made people leer at Baartman has the same effect on us today.