After signaling support for James Baker's Iraq proposals, Condi caved and stood faithfully by the president's failing policies -- assuring her irrelevance, and that of the State Department. 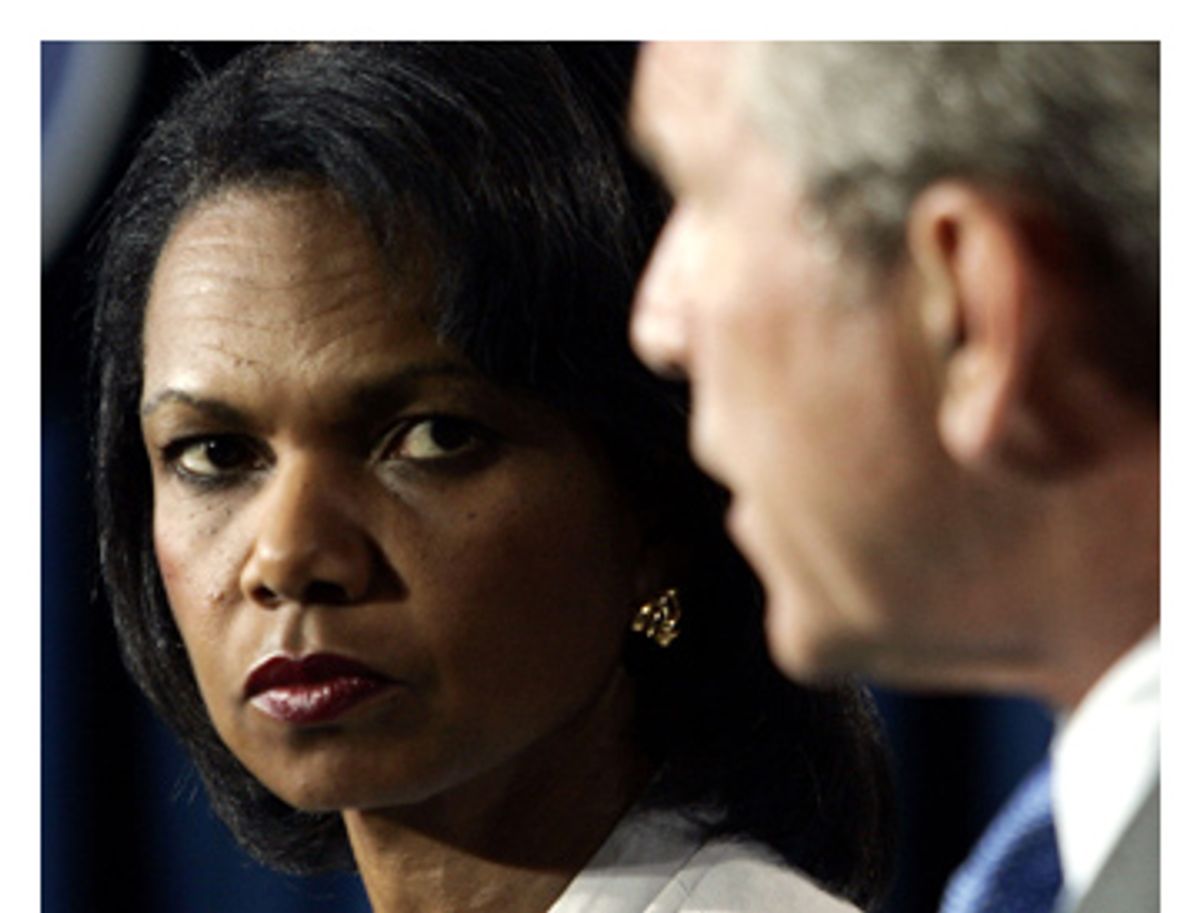 James Baker, the consummate Republican political operator over the past 30 years, did not expect that President Bush would accept the recommendations of the Iraq Study Group he co-chaired simply on its merits. Baker's hidden political hand was unrevealed in the report's dire analysis or in its urgent suggestions for diplomacy or force redeployment. Baker summoned as witnesses the Joint Chiefs of Staff, the military commanders in Iraq past and present (including the recently named commander there, Gen. David Petraeus) and even British Prime Minister Tony Blair. But he understood that enlisting all of these formidable figures was insufficient. Baker privately negotiated with Bush, but he did not rest solely on his own powers of persuasion to convince the president, as the report put it, that the "situation is grave and deteriorating" and his policies are "not working."

Ultimately, Baker's political strategy counted on the decisive intervention of one person in the president's closed inner circle -- who sees him alone and could not be kept from him, and on whom he has become dependent for support and trusts implicitly -- to deliver the bad news that continuing those policies would only deepen the disaster and explain that he had no way out except to change course.

After the debacle of the Israeli invasion of southern Lebanon, which Secretary of State Condoleezza Rice called "the birth pangs of a new Middle East," her former mentor, Brent Scowcroft, the elder Bush's national security advisor and still his public voice, published an article on July 30, 2006, in the Washington Post titled "Beyond Lebanon: This Is the Time for a U.S.-Led Comprehensive Settlement." In it he argued that the peace process the Bush administration had abandoned was essential in stabilizing the whole region, not least Iraq, and in reducing the influence of Iran.

With the knowledge of the elder Bush and Baker, Scowcroft traveled to Egypt and Saudi Arabia, broaching his ideas to President Hosni Mubarak and King Abdullah. They told him they were fully supportive and prepared to step forward, but were skeptical that Rice or Bush would embrace Scowcroft's program. Meanwhile, Scowcroft and Baker began reassembling the elder Bush's national security team, using the Iraq Study Group as a mobilizing tool. They saw this as a last chance to save the Bush presidency, which was indelibly tainting the father's legacy, and replace neoconservatism with foreign policy realism.

At the end of August 2006, Scowcroft briefed Rice, according to a national security official close to Scowcroft. She seemed to concur with his views and asked him, "How are we going to present this to the president?" "Not we," replied Scowcroft. "You." She appeared taken aback, but he emphasized that she was the only one who could induce Bush to change his policies. Thus Rice became the linchpin for Scowcroft's and Baker's plans.

Rice now confronted the biggest quandary of her career. On one side were the authorities that had shaped her foreign policy experience, not only Scowcroft and Baker but also, as she well knew, the looming shadow of Bush's father. On the other was the president, who had raised her into Baker's seventh-floor office in Foggy Bottom, whom she had flattered as the equal of Lincoln and Churchill, and whom, in a telling Freudian slip, she had referred to as "my husband" before a roomful of reporters and editors of the New York Times. Throughout the run-up to the invasion of Iraq and afterward Rice had been Bush's enabler. It was because Scowcroft understood her special relationship that he sought to win her over.

Rice's turn appeared to be reflected in a speech delivered at the Middle East Institute in Washington on Sept. 15 by Philip Zelikow, her counselor, closest aide and friend, who had served with her under Scowcroft on the elder Bush's National Security Council. Well publicized in advance, he asserted that "some sense of progress and momentum on the Arab-Israeli dispute is just a sine qua non for their ability to cooperate actively with the United States on a lot of things that we care about." Immediately, Zelikow came under fierce criticism from Vice President Cheney's office and Rice publicly rebuked him, which provoked his abrupt resignation. In a Nov. 27 letter to her, he wrote that he had "some truly riveting obligations to college bursars" for his children's tuition and instantly had to return to his professorship at the University of Virginia (not exactly Goldman Sachs).

Nine days after Zelikow's resignation the Iraq Study Group report was released. Informed correspondents of the Washington Post and New York Times related in conversation that Bush furiously called the report "a flaming turd," but his colorful remark was not published. Perhaps it was apocryphal. Nonetheless, it conveyed the intensity of his hostile rejection. Still, Scowcroft and Baker, like Vladimir and Estragon in "Waiting for Godot," waited for Rice.

Just as they used the Iraq Study Group as their instrument, Cheney galvanized his neoconservative allies inside and outside the administration to counter it. In order to have their own proposal they put Jack Keane, a former Army vice chief of staff and longtime neocon fellow traveler, in touch with Frederick Kagan, an analyst at the neocon American Enterprise Institute, who urged a massive "surge" of troops into Iraq. Keane's presence lent a patina of military credibility. Encouraged by Cheney's office, Kagan and Keane and a team of neocons at AEI whipped up a PowerPoint presentation, and one week after the ISG report release, on Dec. 11, they were ushered into Bush's presence.

The president had become enraged at the presumption of the Baker-Hamilton Commission even before its members gave him their report. "Although the president was publicly polite," the Washington Post reported, "few of the key Baker-Hamilton recommendations appealed to the administration, which intensified its own deliberations over a new 'way forward' in Iraq. How to look distinctive from the study group became a recurring theme. As described by participants in the administration review, some staff members on the National Security Council became enamored of the idea of sending more troops to Iraq in part because it was not a key feature of Baker-Hamilton."

Donald Rumsfeld had been sacrificed as the secretary of defense, but his replacement, Robert Gates, a former director of the CIA and member of the ISG, turned from skeptic into team player. The Joint Chiefs of Staff; Gen. John Abizaid, head of Central Command; and Gen. George Casey, commander in Iraq, all opposed the "surge" as no answer. Cheney and the neocons saw their opposition as the opening for purging and blaming them. The Joint Chiefs were ignored and sidelined, Abizaid was forced into retirement and Casey was removed (sent into internal exile as Army chief of staff). Their dissent, leaked to the Washington Post for appearance in the paper on the day of Bush's "surge" speech, was an extraordinary gesture by the senior military leaders to distance themselves from impending failure.

Rice, who had fallen into radio silence, canceling a scheduled speech on "transformational diplomacy," finally intervened. When the U.S. military commanders in Iraq and U.S. ambassador Zalmay Khalilzad protested against a rush by the Iraqi government to hang Saddam Hussein, Rice overrode their objections and gave the signal to Iraqi Prime Minister Nouri al-Maliki to proceed.

Maliki's management and subsequent defense of the gruesome circus surrounding Saddam's execution disabused any illusion that he could act in the larger Iraqi national interest rather than as a political representative of Shiite sectarianism. He is to his marrow a creature of the Dawa Party, founded by Muqtada al-Sadr's father, and his alliance with al-Sadr. While the intent of the surge is to revitalize the Maliki government, that government cannot and does not wish to be reformed. The problem is not merely that Maliki is a weak political leader, or that his political coalition wouldn't permit it, or that his Iranian sponsors wouldn't allow repudiation -- all of which are indisputably true. The irreducible reason is that Maliki exists only to achieve Shiite control, and if he did not he would not exist. There is no other Maliki. Nor can Bush invent one.

Bush's "surge," therefore, is a military plan that cannot produce its stated political outcome and will instead further unleash the forces he claims will be controlled. His offensive to subdue the Sunni insurgents, for example, is already accelerating the ethnic cleansing of Baghdad by the Shiite militias, which, rather than being contained, are further empowered.

Bush's rhetoric about "democracy" underlines his studied error in ignoring the lessons of nation building deeply ingrained in the experience of the U.S. Foreign Service and U.S. military in Bosnia and Kosovo. From the start, in the 2000 campaign, Bush disdained "nation building" as Bill Clinton's project. During and after the Iraq invasion, his ideological preconceptions and hostility to the State Department precluded him from adopting its successes.

In Bosnia and Kosovo, full sovereignty was not granted through an election -- to this day -- which would have turned over the country to one of the three contending religio-ethnic groups and fomented opposition insurgencies. Instead, the U.S. led in organizing a broad range of international partners and institutions in creating a structure of stability that is a basis for gradual democratic development. By contrast, the election Bush promoted in Iraq was political grandstanding in the name of "democracy" that incited the exclusion of Sunnis and aggravated civil warfare. Almost everything in place in Bosnia and Kosovo is absent in Iraq. The former is an example of U.S. leadership, the latter a case study in amateurish blundering. Moreover, Bush has turned "democracy" into a synonym for failure.

The State Department has been completely sidelined in the making of Bush's latest and last policy on Iraq. Its experience in the Balkans remains thoroughly ignored. And Rice does nothing to call it to Bush's attention, for that would require her to point out his shortcomings. The State Department founders like a ghost ship. Rice meanders back and forth to and from the Middle East, the shuttle without the diplomacy.

After twice rejecting the job of deputy secretary of state, John Negroponte, the director of national intelligence, was implored to accept it. In exchanging a Cabinet post for a sub-Cabinet one, a position of policymaking for an administrative post, Negroponte excited rumors that he would only have decided to make the switch if he believed that Rice would eventually leave and he would ascend to her job. But, once again, the logic of that Washington gossip is merely rational. Rice the irrelevancy remains Bush's indispensable devotee.