The White House fired generals who wanted more troops. Now it's calling for more itself -- too late, say military experts. 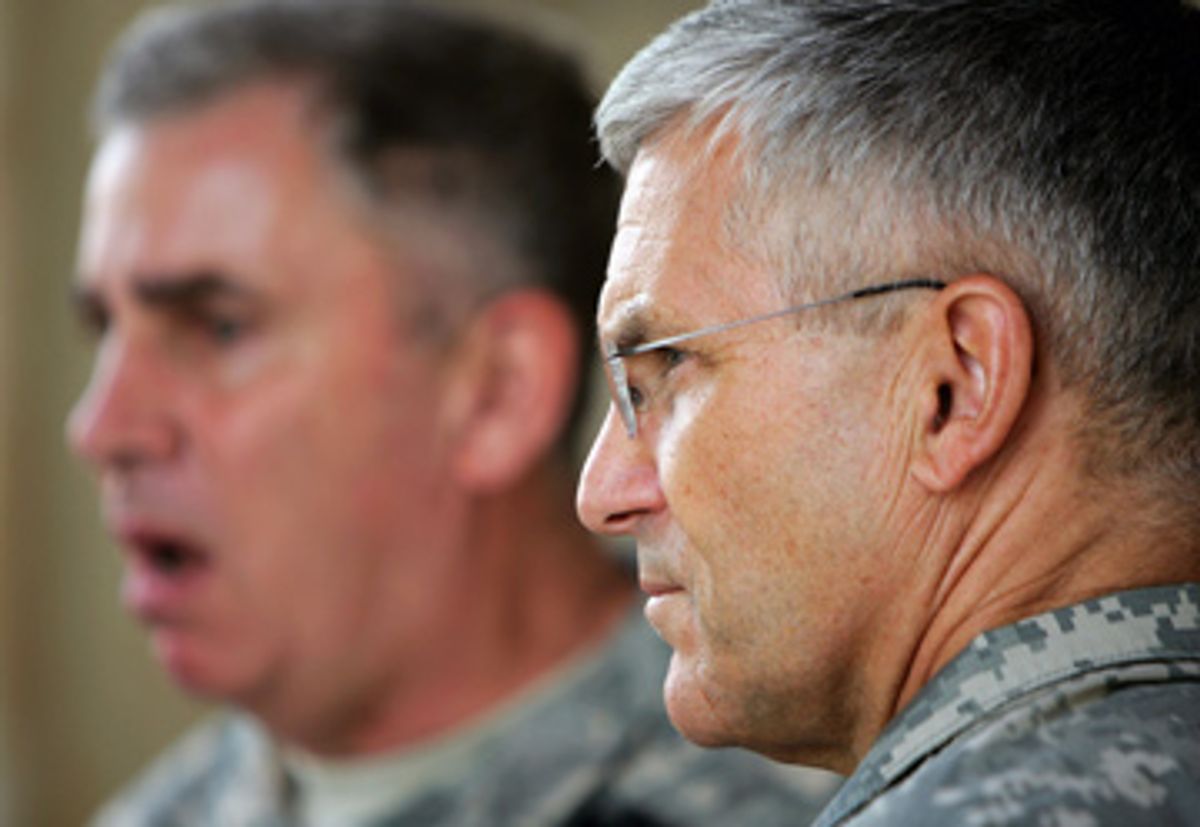 On Wednesday, President Bush called for an additional 20,000 U.S. troops to be sent into the Baghdad cauldron. He admitted that previous efforts to tamp down violence in the city had failed because of too few troops. But he graciously took the blame. "Where mistakes have been made, the responsibility rests with me," he told the nation.

But as with his other adventures, the president managed to remain above the fray, while his minions traffic in a more abrasive campaign. The real blame for the Iraq debacle, they say, lies with the president's top generals, who bungled the war and failed to tell the White House that victory required more troops. "I hope we will hold the generals accountable for their work product," South Carolina Republican Sen. Lindsey Graham, a supporter of the Iraq troop increase, said on "Meet the Press" Sunday. "The current strategy is not working, hasn't been working for quite a while."

To Graham's crowd, the president is now seizing the reins of the war from the misguided military brass. "The president has retaken control of Iraq strategy," the American Enterprise Institute's Frederick Kagan told a crowd of reporters late last week. "For too long I think the administration has allowed a military leadership that was clearly on the wrong track to continue driving in the wrong direction."

Kagan and his colleagues envision this as an epochal moment for Bush, akin to President Lincoln, during the Civil War, removing a timid George B. McClellan and promoting the fiery Ulysses S. Grant. The role of McClellan in this drama is being played by outgoing Gens. George W. Casey Jr., the top commander in Iraq for the past two and a half years, and John Abizaid, commander of U.S. Central Command since 2003. "I respect General Casey and Abizaid, but the strategy they've come up with for the last two years has not worked," Graham told NBC's Tim Russert. "Iraq is not more stable than it was when they took over two years ago."

Graham's claims are incredibly grating to military officers, who say Casey and Abizaid are being blamed unfairly. "Casey and Abizaid are as good as they come," Maj. Gen. Paul Eaton, who was in charge of training the Iraqi military from 2003 to 2004, uttered during an interview with Salon. "From the highest point of this administration, there will be an effort to rewrite history," he said with some disgust.

To Eaton, that history includes the Army being dispatched on a fool's errand: being given far too few troops to conquer and pacify Iraq in the misguided hope of spawning democracy in the Middle East. "It is perfectly logical for these guys, who will not admit to any failure, to hoist blame on the military that executed to the best of its ability," Eaton said.

The military got the signal early on that it should expect relatively few troops and keep its mouth shut. In 2003, when Army Chief of Staff Gen. Eric Shinseki said that hundreds of thousands of soldiers would be needed to succeed in Iraq, he was sacked by the White House.

In contrast to Shinseki, some military officials, who asked to remain anonymous, did fault Abizaid and Casey for exhibiting too much of a get-along, go-along attitude with the Bush White House. "We have a moral obligation to advise our senior officials on what we can do militarily," one official said.

The limits of what can still be done in Iraq will become even more evident with the surge of 20,000 new troops -- a negligible number, say military experts. There are roughly 135,000 troops in Iraq right now, but troop levels have surged up and down throughout the conflict, even as Iraq has continued to drift toward the abyss. John Pike, director of GlobalSecurity.org, the national security Web site, said a 20,000-troop infusion won't make much difference. "There were 152,000 several weeks ago," Pike said, explaining that this new surge would only eclipse that number by a few thousand troops. "This is pathetic."

Army doctrine also considers 20,000 troops paltry. The Army's new counterinsurgency manual calls for a ratio of one soldier for every 40 or 50 inhabitants for a successful counterinsurgency operation. Baghdad's population is 6 million. That means it would take a flood of 150,000 troops into Baghdad, not 20,000, to triumph. It remains to be seen if additional Iraqi troops can effectively fill that gap.

The president conceded that a similar effort to lock down Baghdad failed as recently as last summer, when the military dispatched an additional 12,000 U.S. troops to Baghdad in Operation Together Forward, a much-touted adventure to work hand-in-hand with Iraqi units to crack down on violence in the capital. The Iraqis promised six battalions, but only two showed up. In the end, the plan seemed to backfire. In October, Army Maj. Gen. William B. Caldwell IV announced that the operation "has not met our overall expectations," noting a 43 percent increase in attacks on U.S. and Iraqi forces since the middle of the summer.

"There were not enough Iraqi and American troops to secure neighborhoods that had been cleared of terrorists and insurgents," Bush said about previous efforts to clear and hold Baghdad. And this time, he added, the Iraqis will show up and take the lead.

But some military experts said 20,000 troops might not be enough to clean up Baghdad at this late date. And the White House and the Pentagon seem to agree that after nearly four years of grinding war, 20,000 extra troops is all the military can muster. Once again, Bush's attempt to stabilize Iraq might be too little, far too late.