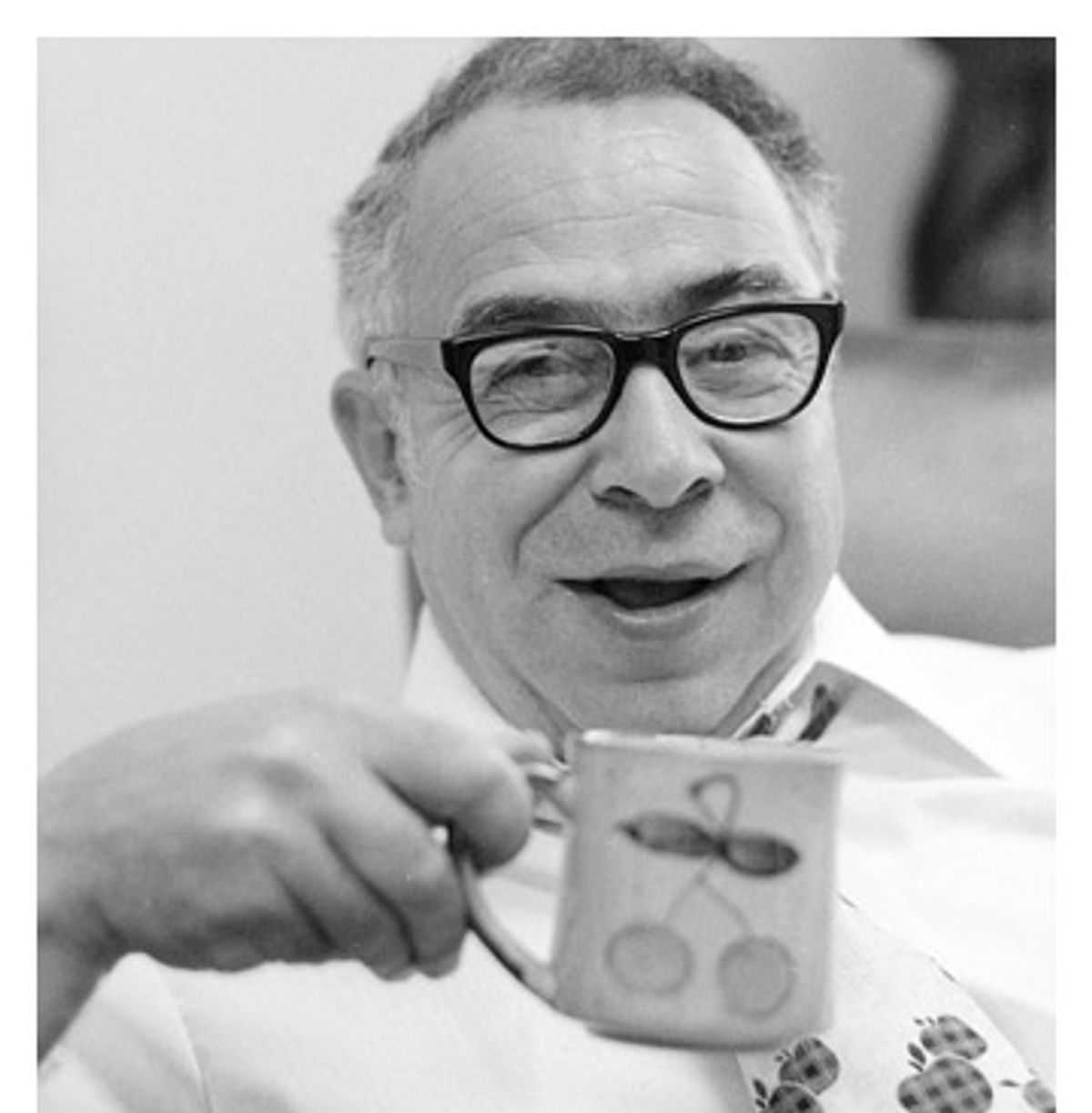 I was, at the time, Paris correspondent for a small but highly regarded news agency, the Overseas News Agency ... a remarkable group of young American newsmen, the finest corps of reporters ever assembled in one capital at the same time. Among them were ... a pudgy cigar-smoking youngster, a stringer for Variety covering show business news, named Art Buchwald, today the premier humor writer and political satirist in the world, published around the world. (Paris, mid-1940s)

From "America Inside Out: At Home and Abroad From Roosevelt to Reagan," by David Schoenbrun (McGraw-Hill, 1984)

It was in the bar in Chez Carrere that I first met the cherubic Art Buchwald. Art was starting his career as a stringer for Variety, a modest post in which he did not yet display his humoristic talents. He had served in the Marine Corps during the war and had been stationed in Hawaii. A quiet, amiable young man with a permanent grin on his round face, he appeared content to observe the goings-on and digest his observations for his future use as a columnist of the Paris Herald Tribune. He quite obviously shared my admiration for Irwin Shaw as both a writer and a human being, and it was largely due to Irwin that he established himself as a member of our group. (Paris, late 1940s)

From "Dangerous Friends: At Large With Huston and Hemingway in the Fifties," by Peter Viertel (Doubleday, 1992)

Upstairs, in the garret, dwelt a forlorn American reporter trying to earn a living by contributing to the Paris Herald Tribune an experimental food and nightclub column. This youngster was a sweet and melancholy ex-marine of twenty-four. But his sweetness rubbed into his reporting an apparent child's naiveté, which made his humor all the more biting and wise. The Herald Tribune finally let him write a column, "Paris After Dark," with his own by-line, Art Buchwald, under which name he was later recognized as a social critic and, still unspoiled, earned fame. (Paris, 1949)

Things were changing under the influence of all those prejudiced Americans who started coming to Paris after the war. Art Buchwald was with the Paris Bureau of the New York Herald Tribune when I went back. A newspaperwoman friend, a Negro woman, was coming over from America, and he went to one of the small hotels off the Champs Elysées to reserve a room for her. It was just a middle-class place, not one of the best. He made the reservation and left. A few days before she was to arrive, he went back to the hotel to make sure everything was arranged. He said to the woman at the desk, "You'll be able to recognize this lady. She's Negro."

Suddenly, everything changed. The woman went away and came back and said there'd been a mistake and all that. Well, Art, who's one of the nicest and most unprejudiced men in the world, wasn't going to stand for that. He had that woman brought to court. (Paris, 1950)

From "Bricktop," by Bricktop with James Haskins (Atheneum, 1983)

Our friendship began in Paris in 1951, the year of "The African Queen." It continued through every trip to Europe and subsequently here. The Buchwalds had lived in Paris, worked there; Art's writing career as a major columnist began there. He and Bogie [Humphrey Bogart] were a funny combination. Bogie was a first-rate chess player and he loved the game; it suited his mathematical brain. And Art loved to play too. He had a chess set in his office at the then Paris Herald Tribune, which was ideal for Bogie, who enjoyed having a place to go after lunch where he could do something so familiar ... Art was a good player, but I have a feeling Bogie was better. Sorry, Art. (Paris, 1951)

We spent time with the Art Buchwalds and some of their friends. Art, still on the staff of the Paris Herald-Tribune, suggested that we linger on this side of the Atlantic for a while. He noted that the life-style was more refreshing, less hectic, and much less expensive; there was even an income tax credit given to U.S. citizens by the IRS. Compared to the weird and depressing places we had just visited in the CCCP, Western Europe seemed like Disneyland. (Paris, early 1950s)

From "The Merchant of Dennis the Menace," by Hank Ketcham (Abbeville Press, 1990)

Charlie [MacArthur, her husband] was happy to be in Paris again, and there was a procession of old friends coming by our apartment at the Lancaster to see him ... Art Buchwald, then a columnist on the International Herald Tribune, told him that Charlie and Ben's [Hecht's] play "The Front Page" was what sent him off to seek his career with newspapers. (Paris, early 1950s)

From "My Life in Three Acts," by Helen Hayes with Katherine Hatch (Harcourt Brace Jovanovich, 1990)

Innumerable of my friends are amusing, humorous, witty, capable of sending me into paroxysms of laughter. Columnist Art Buchwald -- whom I have known since the days when he worked on the Paris Herald-Tribune -- is certainly one of them. Art can crack me up completely -- whether in conversation or in print. (Paris, early 1950s)

Lunched with Art Buchwald at dear Madame Pannetrat's little restaurant [Aux Bonnes Choses] -- on a truffle omelet, confit d'oie, done with white beans, and a bottle of wine. Art is doing a crazy column on me which may be very funny. He is a sweet guy and has done wonderfully well. (Paris, 1955)

From "Love and Kisses and a Halo of Truffles: Letters to Helen Evans Brown," by James Beard, ed. by John Ferrone (Arcade Publishing, 1994)

Mother was starring in a Theatre Guild production of Thornton Wilder's "The Skin of Our Teeth" ... there were two walk-on parts available ... I took a two-week leave [from Third Air Force duty] ... loaded our Austin-Healey on the ferry to France, and booked into what the American Express travel agent assured me was the cheapest hotel in Central Paris ...

Daily breakfasts at cafes on the Champs-Elysées with ["1776" author] Peter Stone and Art Buchwald, who'd write his newspaper articles at the table while we talked. In fact, Art wrote one about Peter doing what he described as the "three-minute Louvre." You'd leave a cab running, sprint into the Louvre, visit the "Mona Lisa," "Winged Victory," and "Venus de Milo," and return to the cab. When Art asked Peter for his secret, Peter replied, "Sneakers." (Paris, mid-1950s)

From "Hello Darlin': Tall (and Absolutely True) Tales About My Life," by Larry Hagman with Todd Gold (Simon & Schuster, 2001)

At a buffet dinner at [Tyrone] Power's small Park Avenue penthouse, where guests were invited to see NBC's seventy-fifth anniversary tribute to Standard Oil of New Jersey ... Art Buchwald, the Paris columnist for The Herald Tribune, ambled around the living room saying hello twice; as I heard him chanting "Hello, hello" to yet another pair, I wondered how anyone could be so relentlessly cheerful. (Six years later he was hospitalized with clinical depression, an affliction of many humorists.) (New York, 1957)

From "On the Wing: A Young American Abroad," by Nora Sayre (Counterpoint, 2001)

Art Buchwald said he came to the [Republican national] convention in order to see his pals, mostly other news people. He told our table about a column he had just written. The comical premise was that the Republican Party had attracted so many campaign contributions that it found itself with two billion dollars it couldn't spend. It decided to buy something nice for the American people. Here was the gift: a free week's bombing of Vietnam. (Miami Beach, Fla., 1972)

He'd written a book called "I Never Danced at the White House," and his publisher had posters made up showing Buchwald in top hat and tails and cane. As soon as Jerry became President, I invited Art to dinner. He said he had a speaking engagement. This happened so many times he became embarrassed that I might not believe him. It got to the point where he'd send me a copy of his contract to prove he was honest and truly had to give a lecture. He finally came to a dinner, asked me to dance, and later sent me one of his posters -- framed -- with the word "Never" crossed off. (Washington, D.C., 1975)