The battle for an Iraq plan

The Bush surge has lawmakers locked in a slugfest over what to do next about the war. 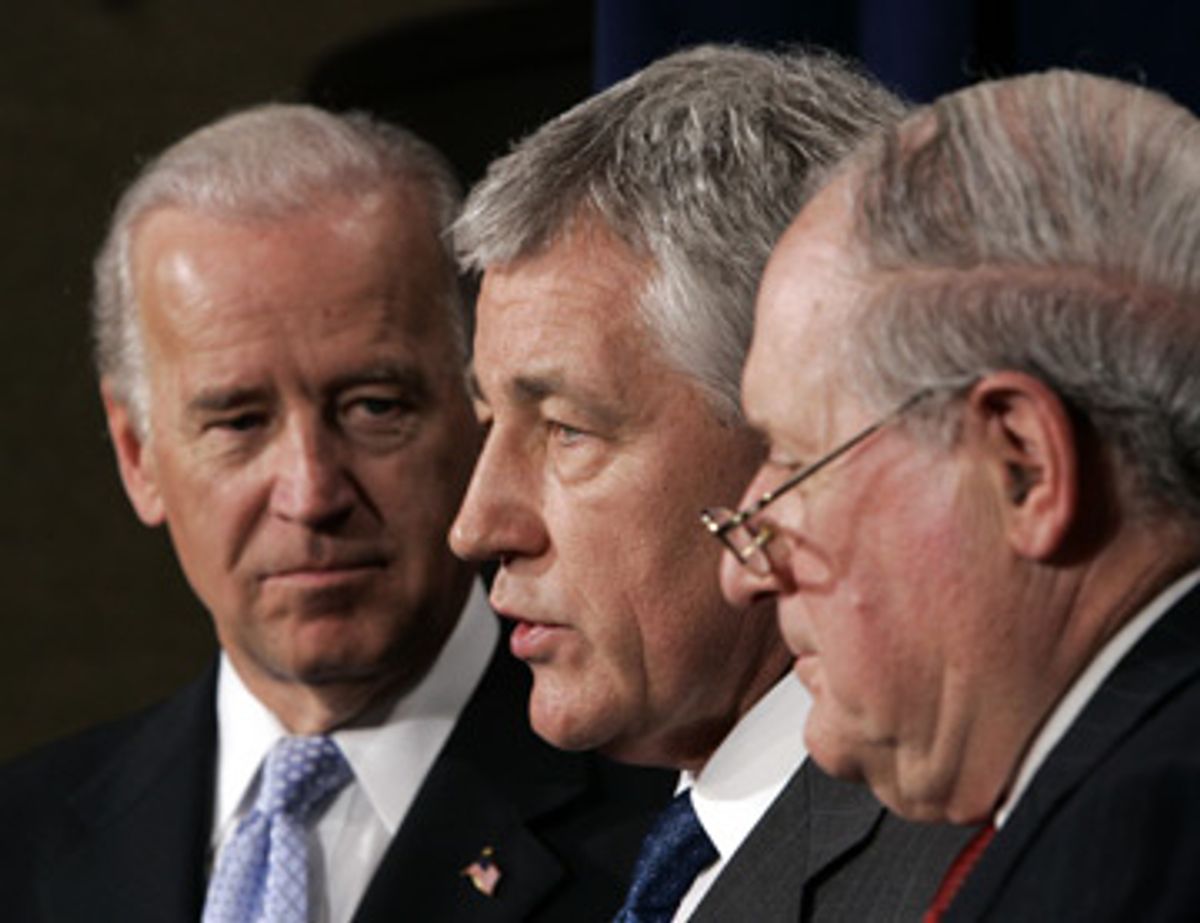 One week after President Bush announced plans to send more troops to Iraq, Congress finds itself adrift in a chaotic maze of competing, often irrelevant and largely contradictory proposals about what to do next. The confusion bubbled to the surface Wednesday afternoon in a two-hour marathon of formal and informal press conferences at the Capitol.

After lunch, elected leaders mingled on the polished marble of the east hallway outside the Senate floor, offering myriad solutions to an intractable war. Though they stood just a few feet from one another, each orbited by various reporters, no two politicians seemed to offer the same plan.

Sen. Dianne Feinstein, D-Calif., proposed a new law that would put a time limit on the 2002 congressional authorization for the use of force in Iraq. "In my view it should be June 30," she said, a date that could require President Bush to either beg for reauthorization this summer or bring the troops home.

Minutes later, just a few feet away, Sen. George Voinovich, R-Ohio, proposed a sort of focus-group approach to the problems in Baghdad. "Someone suggested instead of a surge, maybe pick out a neighborhood there and see how it works, a pilot project," he said.

Sen. Norm Coleman, R-Minn., said he could see himself supporting a recent resolution proposed by Sens. Joseph Biden, D-Del., and Chuck Hagel, R-Neb., that symbolically opposes the surge in troops, but only if some of the language was changed first. "We'll have an opportunity for a lot of discussion between now and next week," he said, as if that provided comfort.

Then came Sen. Barack Obama, D-Ill., whose dash for the elevator was blocked by a particularly large crowd of scribblers, attracted like honeybees to the scent of his blooming presidential ambitions. "You know [Sen.] Chris Dodd has come up with a proposal to cap troop levels," he said. "Senator [Hillary] Clinton talked about capping today. Senator [Ted] Kennedy has his proposal."

"That will be coming soon."

The scene recalled nothing so much as the wisdom of the Founding Fathers, who gave Congress the power to raise an army, maintain a navy and declare war -- but no say over military strategy. If Congress tried to play commander in chief, Washington, D.C., may well have been sacked decades ago by a foreign army that, upon storming the Capitol, would have discovered 535 legislators hard at work on several competing bills to condemn territorial incursion.

As it stands, Senate leaders expect to take at least one more week before holding votes on the Biden-Hagel non-binding resolution. The Democratic leadership in the House expects to consider a similar condemnation as early as the week of Jan. 29. By the time the indignant document reaches the president's desk, the surge will already be well under way.

This did not discourage Sen. Hillary Clinton, another presidential wannabe, from staging her own overflowing press conference just after 3 p.m. In a display of triangulation, she called for a surge of 2,300 additional troops into Afghanistan, a decrease in the number of troops in Iraq, and the establishment of as-yet-undefined benchmarks that must be achieved by the Iraqi government. During the question and answer period, she admitted that her plan, like others, was unlikely to become law. "I can count," she said, in reference to a lack of supportive votes in the Senate.

One of the more practical proposals came from Rep. John McHugh, R-N.Y., who represents an area that includes the 10,000-person 10th Mountain Division of the U.S. Army. McHugh had just traveled to Iraq and Afghanistan with Clinton, and concluded that Congress needed to reassert its authority over the appropriations process, requiring detailed justifications for future expenditures in Iraq. In McHugh's vision, Congress would gradually take more control over the war by scrutinizing and attaching requirements to President Bush's supplemental requests to fund the war. "I think there should be no more blank checks," he said. "No more promises of forever."

Such concerns from party members have riled the Republican caucus in the House, which has met twice behind closed doors in recent days to hash out concerns over President Bush's current war strategy. Democratic aides have been circulating statements from 12 Republican congressmen and nine Republican senators who have expressed concern or opposition to the surge in troops. "I expect it to be a bipartisan vote," said Majority Leader Steny Hoyer, D-Md., regarding the House's non-binding resolution to oppose the surge, which is still at least two weeks away.

In the meantime, Minority Whip Roy Blunt, R-Mo., has declined to say whether he would arm-twist Republicans into voting against the non-binding resolution. "All of this discussion so far has been a partisan ploy to embarrass the president," he declared at a meeting on Tuesday with reporters. On Wednesday, Blunt delivered his own version of a partisan ploy, co-sponsoring an equally symbolic resolution to "prevent the Congress from restricting funding to troops already in combat."

Blunt said he would decide whether to attempt to marshal a unified Republican front after he saw the text of the anti-surge resolution. He said he would not force Republicans to vote one way or the other on a "vote of conscience." "I have often said, 'I will never ask you to do anything against your conscience or your district,'" Blunt likes to joke. "Maybe against your better judgment." But it seemed optimistic to expect the coming debate to hinge on anything as noble as the conscience of individual politicians.

Back in the Senate, Sen. John McCain, R-Ariz., a presidential contender, took his position in the east hallway, offering the clearest window on the partisan slugfest ahead. "If you oppose the policy, then cut off the funding. That's the power of the purse," McCain said, in a dare aimed at Democrats already jockeying for position in the 2008 presidential race. "I think it's not intellectually honest to say, 'You are going to Iraq to fight and risk your life, and we don't support what you are doing, but we support you.'"